Known for her catalogue despair, violent emotion, and obsession with death, Sylvia Plath was one of the most bold poets of the 20th century. Her life story could be considered tragic as she was monopolized by a severe depression yet expressed her sorrows through enlightening words in her many poems. The death of her father when she was only eight years old commenced her lifelong despair and insecurities. In the poem “Daddy”, she speaks of how she never fully understood him and blames him for the emptiness she feels without a father.

Don't use plagiarized sources. Get your custom essay on
“ Analysis of Poem “Daddy” by Sylvia Plath ”
Get custom paper
NEW! smart matching with writer

As time moved on, Plath discovered her writing talent while excelling in school. Although a story of hers was welcomed by Seventeen Magazine her senior year of high school and she received two scholarships to attend Smith College in Massachusetts she was still extremely depressed. Her pain and suffering ended when she met an untimely death by committing suicide at the age of thirty.

Although Plath’s life ended with tragedy, her writings continue to be seen a culturally significant opinion gender roles.

Proficient in: Daddy By Sylvia Plath

Her poetry, typically taking the form of free verse, carried with it an intense intimacy that influenced numerous writers of the time. Her suicide also made her infamous within the literary community, greatly increasing Plath’s profile into an enormous following. Plath’s expansive examination of gender roles was based upon her father’s death and her divorce from Ted Hughes. Gender roles in Plath’s writings focus not only on her relationship with Hughes, but her status as a single mother, forced into a domestic setting to care for her children alone.

Plath’s view of the male gender was further warped by her father’s death early in her life, which left Plath looking for an authoritarian figure to replace him. Her writings continue to inspire men and women alike throughout the world, providing insight on the status of women in Plath’s time.

What is so moving about Plath’s poems are the fact that we know that her father has died at a young age but we are never told why she feels so malevolent towards him instead of wishing he was here with her. Daddy illustrates an example of Plath’s thinking: Black and White. She sees herself as a victim and her father as her enemy and herself as the oppressed, there is never any grey in between. This resonates as an immature form of thought processing, as at the age of 8 she couldn’t have possibly known much about her father. Yet again, though, we do not know if he had abused her or her mother to make Plath feel this way. Plath includes a lot of suffering and violence into her poems. Suffering is shown in Lady Lazarus, lines 25-29 reads “what a million filaments the peanut-crunching crowd shoves in to see them unwrap me hand and food- the big strip tease”. Her suffering here is a portrayal of herself as a circus attraction that has no control as the crowd picks her apart and embarrasses her. Violence is also exhibited in lines 57-64 “there is a charge for the eyeing of my scars, there is a charge for the hearing of my heart- it really goes. And there is a charge, a very large charge for a word or a touch or a bit of blood or a piece of my hair or my clothes.” Lady Lazarus is telling us that the crowed has to pay to see her somewhat like a stripper. She feels trapped and that everyone around her wants a literal piece of her, her hair and even her blood. Sylvia makes several references of the holocaust in both poems. Her father was in fact born in Germany but there are no records of him ever being in the holocaust or being a part of the German Nazi party. Plath herself was young child during WWII and was living in the USA. Even though she was not present in the holocaust she is able to use her talent of vivid imagination to offer an insight into her personal life and the life of those involved in the holocaust.

In her poem, “Daddy,” Plath goes on to refer to her father as a Nazi and even a vampire. Describing her father as a part of the supernatural is something unusual that Plath had not done in her earlier poems. She is directly addressing someone who is dead and even referring to him as a vampire, a mystical being. It is interesting how, although she resents her father for leaving her and her mother behind in his death, she chooses to marry a man similar in characteristics as her father. Her constant power struggle between herself, her father’s control, and her triumph of freedom leads the reader to believe that she has moved on and can finally be at peace yet she surprisingly marries the same type of man. Even if the marriage was not successful, as during the time the poem was written the media hints towards rumors of Hughes’s infidelity, her father still haunted her even after his death. One can only wonder if the hatred towards her father was because of his infidelity to her mother as Hughes was unfaithful to her. Sylvia expresses a lot of her frustrations with the male gender and even some frustration towards herself. She does not wish to be as sad as she is but yet she is and she is resentful and she blames her father for leaving her and even goes as far as to claim he is the reason she wants to die so that she can see him. Poetry was definitely an ailment for Plath but forlorn she was found dead with her head in an oven, carbon monoxide poisoning, from an apparent suicide. 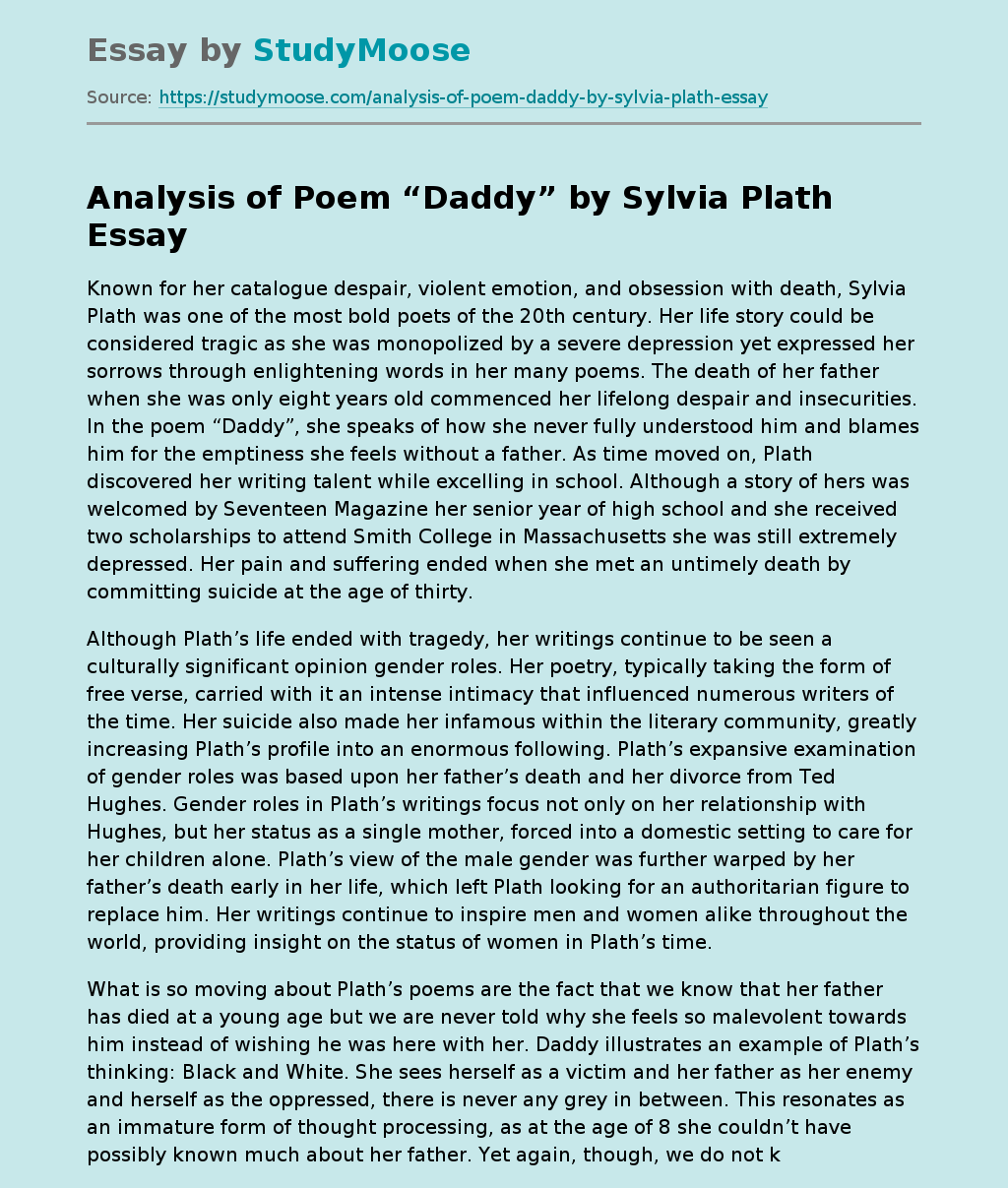