James Fenton born 25th of April 1949 is a modern English poet, journalist a literary critic and was also a former Oxford professor of poetry. He wrote several books about poetry mostly about relationship and war like the collection of poems ‘The Memory of War’. He received multiple of awards for his poetry, the latest was in 2007 when he was rewarded a ‘Queen’s Gold Medal for Poetry’. Carol Ann Duffy born 23 December 1955 is also a modern Scottish poet and playwright. Her poetry style speaks about everyday life experiences through stages of her life about love, memory and languages.

Don't use plagiarized sources. Get your custom essay on
“ ‘In Paris With You’ by James Fenton and ‘Hour’ by Carol An Duffy ”
Get custom paper
NEW! smart matching with writer

She wrote poetry collection, children books and plays. Both poets show heavy feelings about love in their respectful poems but each poem contains different contents but apply to the same theme: love.

In Paris With You makes the reader think that the poem is romantic but it actually an anti-cliché poem that focuses mostly on the poet’s bitterness towards love because he speaks about his experience with his rejected love and his rebound relationship, the poem rejects conventional ideas about love.

He might have been in love before and she left him, that is seen when he says “Yes I’m angry at the way I’m been bamboozled.” and that is why he’s hurt and in need of forgetting about his former lover but isn’t quite there yet when he starts the poem in a negative way: “Don’t talk to me of love. I’ve had an earful” This suggests that the narrator finds the subject of love difficult to discuss because of his share of love and heartbreak.

Throughout the poem ‘Don’t’ is repeated and that indicates repetition in the first and last two stanza, it also shows how controlling Fenton was with his former lover when he’s always saying ‘Don’t’ as she left him. This gives the reader an impression of the poet is possessive and heartbroken because of the ending of his former relationship. The sentence ‘Don’t talk to me of love’ and that proves that the man is determined on keeping the subject of love out of a conversation and detest it being brought up by cause of his heartbreak from his past relationship as if trying to protect himself from further pain. I find the way the poet started the poem in a negative way really intense because the poet jumps into the subject without pleasantries towards love and doesn’t hide his distaste towards it and shows his deep bitterness against love.

Fenton also talks about how he’s victimized and has a feeling of self-pity by love throughout the poem when he describes the state he has been when his relationship ended with his ex lover, how he spent it hurt and drowning his misery with alcohol to help him forget. In the first stanza, he says: ‘I’m one of your talking wounded.’ That has a strong imagery of war because ‘wounded’ suggests that someone is injured in battle and in this case, injured because of love. The poet also mentions that: ‘I’m a hostage.

I’m maroonded’ and that show us his emphasize on him being abandoned and deserted as he describes it as he’s trapped and stranded. He uses metaphors when he says that he’s really trapped as a ‘hostage’ and left alone in an inescapable place. He shows rebellion when he says ‘maroonded’ instead ‘marooned’ which is the right term. It gives the reader and idea of how painful love is to the poet and lowers the reader’s expectations of romance and love. Fenton uses a comical rhyme in ‘wounded’ and ‘maroonded’ to add a humor into the poem to lighten up the mood of the poem despite the bitterness. I think that the way the poet describes himself is in a devastating state after being deceived by love.

The poem’s title ‘In Paris With You’ suggests a romantic theme but it’s ironic that Paris is the city of love but Fenton is only in Paris because he’s on the rebound but only because Paris reminds him of his former relationship. He uses repetition of ‘I’m in Paris with You’ throughout the poem reflects the speaker’s insistent concentration on the present. Fenton then goes off listing to show his disdain towards Paris’ landmark and how he doesn’t want to visit Paris’ romantic landmarks ‘If we skip the Champs Elysees’ meaning he would rather ‘remain here in this sleazy, old hotel room’ meaning that the poet rejects the traditional and usual romantic gestures and places in Paris and that they are unimportant and that shows us that he doesn’t care about the scenery around him as long being together with his lover, but stay in Paris is only about being on the rebound to forget his former love, and that he’d rather stay in a cheap hotel room instead of going out to romantic Paris features.

It creates an image in the reader’s mind of the tone of this poem where it goes from bitter, sad and mournful and tells us that the poet doesn’t actually care about the woman or lover he had in company. There’s enjambment between stanzas three and four in ‘…in this sleazy…Old hotel room.’ That is used because the poet wants the poem read in a faster pace instead of a slow one without pauses in between stanzas so it shows the poet’s thoughts. I think the way the poet emphasize his bitterness towards love resulted to him turning towards alcohol and lust, his behavior is relatable in many ways because after a heartbreak, people tend to try to forget their feelings and their aching heart.

Hour talks about how time is an enemy of love and how it destroys love with how quick it goes, that time is an obstacle for love and Duffy starts the poem with: “Love’s time beggar,” which is personification and it suggests that love is dependent and is a slave for time, that it doesn’t last forever and that is a negative sign. This has a huge impact on the reader because when being in love, there is never enough time to spend together with your lover and it goes quickly. The personification show us the image of love being a beggar and time being someone who would pass by and offer, that is when Duffy used “…but even a single hour, bright as a dropped coin, makes love rich.”

And that means that time, which is the passer, offers love only an hour to be spent on and narrator values that and it also shows strong imagery of wealth to present that the love is far more precious than all the wealth in the world. This also suggests to the reader that the time spent between the speaker and her love is valuable for the both of them. Like I said above, love being put as a beggar has a negative tone and that only highlights the fact that time is a problem for love. The poem is a extended metaphor that time wastes love and that is seen when the narrator says: “For thousands of seconds we kiss…” and that could only mean that the narrator in the poem has been counting the time because she still couldn’t get enough of her lover.

Throughout the poem, the poet uses various of imagery of wealth that identifies that the narrator finds the hour spent with her love one precious to her, Duffy uses the sentence: “love spins gold, gold, gold from straw,” which links to the story of Rumplestilskin where it also talks about how straw turns to gold, it also introduces the contrast to show that opposite things mentioned in the poem like ‘jewel’ and ‘cuckoo spit’ and in the sentence, the poet says that love is spinning from straw which is negative and an ordinary thing to gold showing that love is cherished and valued.

If the reader has experienced love in their life, they will find themselves relating to certain parts of the poem and find that longing love does indeed leave you finding the small amount of time precious. Duffy uses colour like ‘gold’ and wealth imagery when she mentions ‘coin’ – ‘rich’ – ‘treasure’ and etcetera to emphasize that love is more valuable than all the wealth and treasures of the world. I could agree that being in love with someone could leave you dependent on that person and set them as your reason of happiness and that is a beautiful thing, however, people shouldn’t rely on love too much because it will leave them in pain when the other person break their heart or falls out of love.

Duffy uses romantic imagery in the first stanza, line 3 and 4 where she shows how unromantic scenery is more than enough for her that her and her lover would rather be out in nature. She says: “Spend it not on flowers or wine, but the whole of the summer sky and a grass ditch.” And that the place to her isn’t important as long as her lover and she are together, she prefers the outdoors because of the natural setting that surrounds them because of its simplicity. It also displays sign of sibilance and the effectiveness of the narrator’s feeling and her lover would rather enjoy the nature and the natural air instead of going on typical and traditional dates (courting) and that shows non-conventional ideas of love.

The reader would find the idea of being out in nature a bit strange for dates but some may relate. Duffy suggests that “the summer sky and a grass ditch” which is far away from being a traditional place to spend with your love one but the narrator finds it an exceeding choice to enjoy the ‘summer sky’ and not be distracted with people in public, romantic places because the narrator only has an hour to spend it with her love. I find the setting of the poem odd to be a place spent by two people but it only defines who her lover and her are as a couple in this society and how different they are from the rest of normal couples and that is special.

Both poems have similarity because they both show vivid feeling conveyed by the poet. Whilst In Paris with You is bitter towards love, Hour is more about how time is an obstacle for love and spending an hour with your loved one is precious. The structure in both poems is also different. The similarities between both poems use metaphoric language to describe emotional feelings and also write in first person. I like the ‘In Paris With You’ poem because it had a deeper meaning into the words and people would have to read between the lines to finally get it with poetry. ‘Hour’ is a beautiful poem but I didn’t find myself pulled deeper into the words but Duffy does display both light and darkness and that is something interesting.

‘In Paris With You’ by James Fenton and ‘Hour’ by Carol An Duffy. (2016, Aug 22). Retrieved from https://studymoose.com/in-paris-with-you-by-james-fenton-and-hour-by-carol-an-duffy-essay 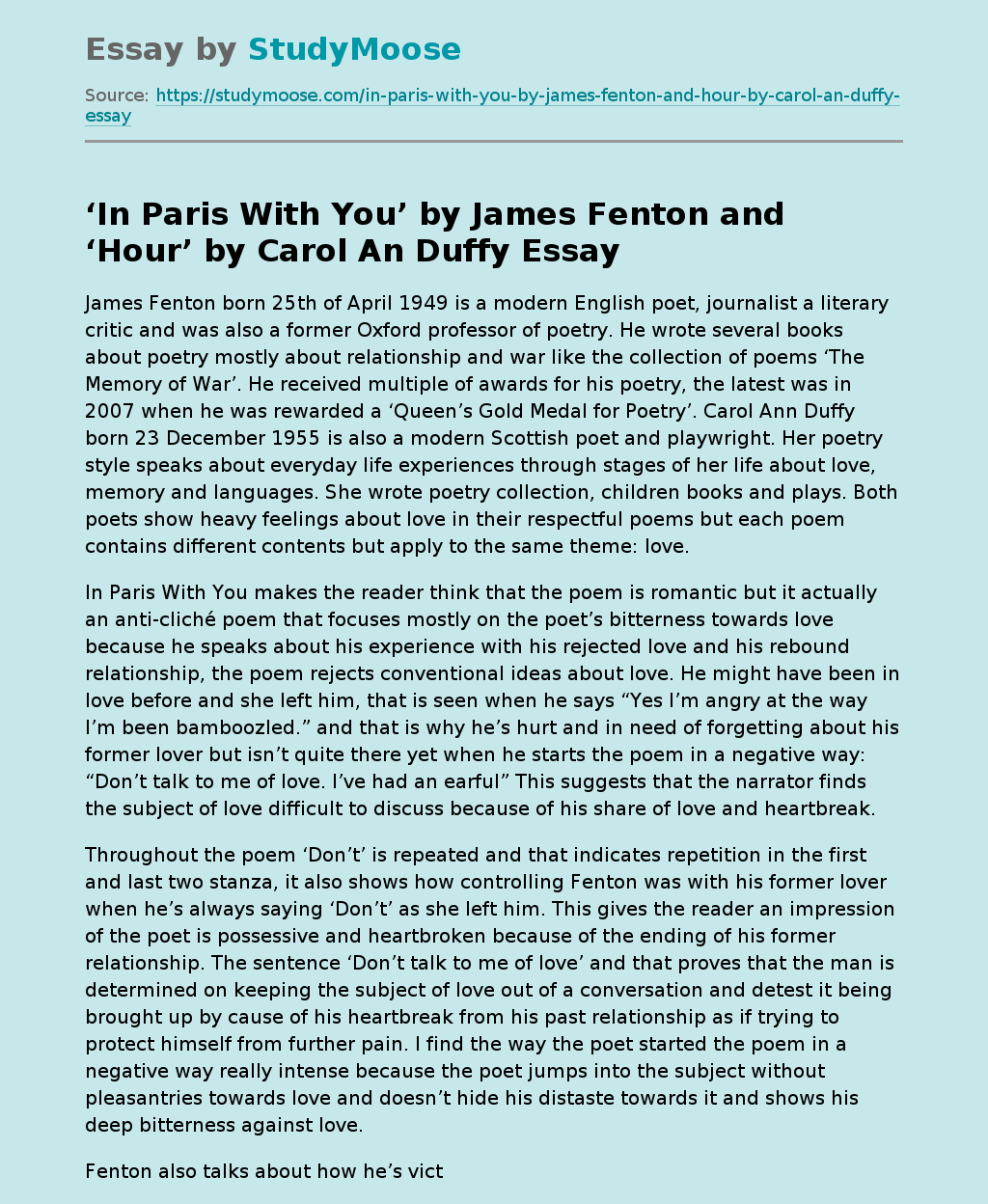