The Bustle in a House

Emily Dickinson wrote The Bustle in a House in 1866. It is a ballad with two stanzas of four lines each, or two quatrains. There is no set rhyme scheme, because each of the lines is enjambled. The meter of the poem is trimeter, with every third line of each stanza being tetrameter.

The theme of The Bustle In the House is about how losing a loved one, while it is depressing in many ways, must not affect how we live our lives.

Don't use plagiarized sources. Get your custom essay on
“ The Bustle in a House ”
Get custom paper
NEW! smart matching with writer

Having to deal with many deaths herself, Emily Dickinson wrote this poem depicting the grievances she went through after losing her family members. The poem is written in a serious, yet calm tone, not despairing over the losses; the death was merely a Bustle in a House. People would generally consider death to be the worst disaster that a loved one can endure, but Dickinson downplays death and reduces it to a bustle, a mere stir in a household.

Dickinsons word usage and capitalization are also subjects of criticism in this work. The capitalization of the word Morning shows that the word denotes something else. As previously stated, she physically demonstrates that man should not mourn over the loss with an absence of the word mourning and instead is replaced by Morning. House represents a place where life starts and where life ends. However, it is also a place that is unchanging and remains the same for eternity. Dickinson shows the importance of man moving on and how man should be like the house, where it continues to function in society.

Society does not wait until man recovers from his loss, but rather carries on its tasks.

Dickinson also has heavy use of symbolism to show that man must accept deaths as they come and not mourn over the loss. The only way for humans to overcome the loss is to put aside the emotions and the love that they once had Until Eternity. Eternity is a symbol for the next world, since death is not the end but the beginning of a second life. She uses a metaphor to show that emotions and love that one previously had for the individual must be [Swept] up and [put] away because life goes on; the Earth continues to spin and industries continue to operate. The Earth, as referred to in the poem, refers to the ground and the grave in which the lost one is buried. The solemnest of industries enacted upon this Earth, this grave. Dickinson suggests mankind to remember the good memories of the loved one and not reminisce over what could have been or what might have been. Love can only grow stronger as time passes and by the time eternity comes, it will be even stronger than before. 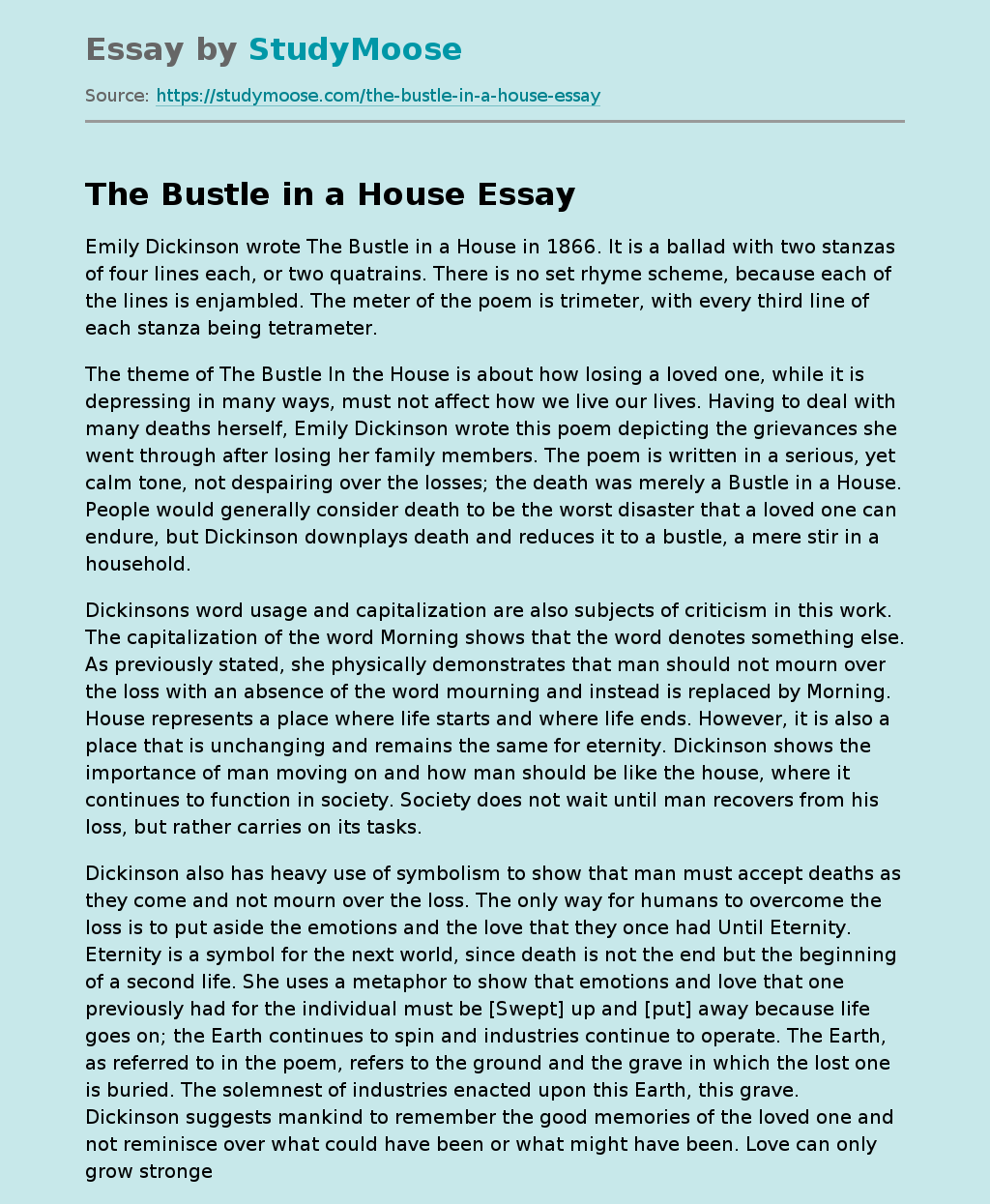