Use Of Literary Devices In Emily Dickinson Poems

In everyday life, there is a constant struggle to create a sense of self within the mind of every person in this world. There is always a conflict present between the importance of self and the influence that others pose on this sense. When this sense is reached in life, there is still constant influence from others to alter this frame of mind. In many works of literature, this struggle can be seen within the characters of the story.

A conflict is always found between the importance of self and the interference that others inflict upon those who are trying to discover their sense of self.

Don't use plagiarized sources. Get your custom essay on
“ Use Of Literary Devices In Emily Dickinson Poems ”
Get custom paper
NEW! smart matching with writer

A pressuring factor is often seen to influence a person’s view of themselves. Individuality and self expression are very important to happiness and success in life to one’s self, and constantly there are others who hinder a person’s ability to express themselves and be the person that they are. In knowing that a person is happy with their personal status and outlook on life, they can find that it is much easier to live life with the reassurance that they know that at least they are happy with themselves.

In Emily Dickinson’s poem “There is a solitude of space” she alludes to the fact that a man or woman’s soul is theirs and theirs only, but can come into turmoil from others. The sanctity of the mind can be broken through a person’s manipulation of it, and current feelings can be replaced with the negative feelings of others.

In Kate Chopin’s short story, “The Story of an Hour,” the main character has a poor sense of self due to the presence of her husband. As her life goes on, and she catches wind of the news that her husband has died, she is stricken with grief. Soon, she finally realizes how great of an event this is, because she can finally be free from the bondage of marriage and all of its turmoil. Once she finds this joy within herself that she is finally free, her husband is found to be alive and returns home. Shortly before his arrival, she dies because of the great joy she has found in her freedom from the chains of marriage. Her husband and the marriage that she has lived through, has oppressed the growing of her mind and self feelings, and kept her living in the bonds of an unhappy existence.

The literary devices used in both of these works show the examples of how self-image can be influenced by outside sources. The paradox shown in the poem shows how others can influence thoughts by stating, “A soul admitted to itself- finite infinity.” The paradox of “finite infinity” shows that the self-importance of one’s self can be broken at some point if it is allowed to occur. Dickinson also uses her figurative language to describe the solitude of other inanimate objects that is unbreakable, but compares those to the solitude of the mind that can be interrupted with agitation. In Chopin’s short story, she uses the device of irony to show how the influence her husband had on her caused her death. As soon as the main character realized that she was free from her submissive role in the house and was free, her retarding factor came back to haunt her. When her husband returned, her joy was quickly shut down by her death, and she was never able to experience the freedom that she wanted so badly.

A conflict between self-importance and those who interfere with this importance is commonly present in life. Many works of literature show this conflict in their plots, as well as through many other literary devices. It is up to those who find self-importance essential to keep themselves and their thoughts in tact and not allow interference to get in the way of their lives.

Use Of Literary Devices In Emily Dickinson Poems. (2016, Jul 11). Retrieved from https://studymoose.com/use-of-literary-devices-in-emily-dickinson-poems-essay 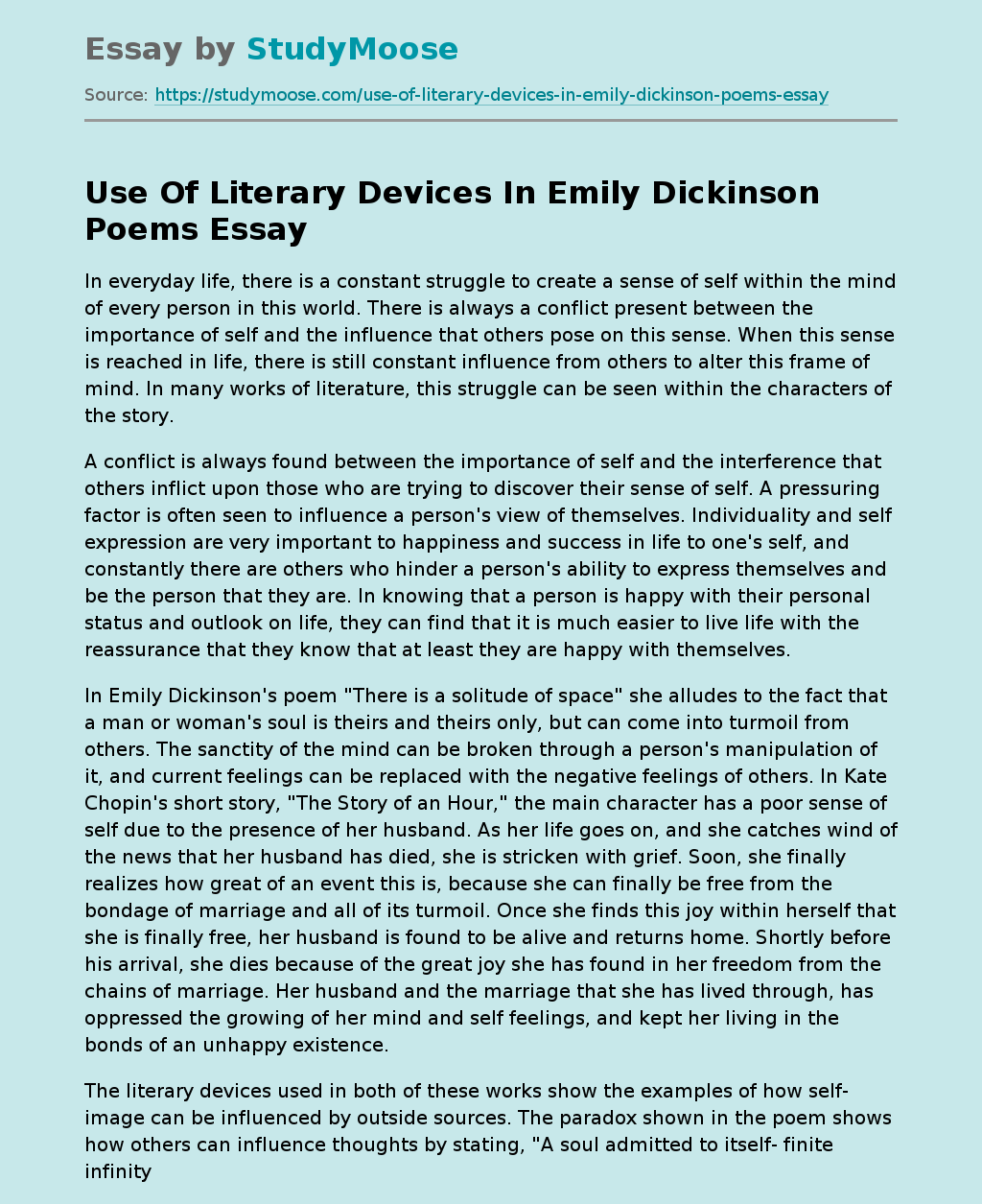