Emily Dickinson was a religious person, but she always questioned faith and religion in her poetry. She seems to not take a solid stance in the debate between science and faith. However, Dickinson seemed to particularly struggle with the idea of “faith” and what it really meant. This is evident in most of her poetry, but two poems that indicative of this are “Faith is a fine invention” and “I heard a Fly buzz–When I Died”. “Faith is a fine invention” is a short poem comparing faith and science.

I see this poem as a concise and truly accurate claim.

Dickinson is basically portraying that religion is okay, just as long as the individual is aware of when it is appropriate to depend upon it. I think this poem does mock religion a bit. She never says that all people who put their trust in their religion are ignorant, but I do believe that she is implying that some may be consumed by their faith, to the point of blindness.

Faith cannot solve everything, and those who believe it does are somewhat ignorant to believe so. Dickinson also refers to “faith” as an “invention” in the first line of the poem.

I feel that to imply that something has been invented would be to suggest that it’s artificial and not concrete. Maybe man has invented religion as a means of a scapegoat in situations, so that’s why faith, to Dickinson, is “… a fine invention / When Gentlemen can see–” (Dickinson 1-2).

It is an invention, because religion sometimes may become a tool to draw attention away from immorality. This is true about those who claim to have strong faiths, but are very quick to find faults in others. Faith should not be way of taking the blame off of oneself.

If someone cannot view their own behavior as immoral, are they completely blind? This poem somewhat satirically mocks how people use faith in situations where it may prove to be completely useless. Certain life problems, health ailments especially, cannot be solved by reliance on faith. In a crisis, religion can’t be relied upon to save an individual. I feel that the “microscope” in line 3 holds multiple meanings. The microscope a tangible tool to help us see things that we cannot see with just the naked eye. This is a metaphor for humans being able to see the truth and reality of a situation.

This presents a realness in the poem, as opposed to the “invention” of faith. “In an emergency” (Dickinson 4) science would prove to be useful while faith would not. I would argue that this poem definitely forces readers to contemplate her faith. The poem is short, but conveys a clear message. Many individuals turn to god when they are in the midst of a life crisis. However, faith is not the answer “in an emergency” (Dickinson 4). God cannot always save us, so we must open our eyes and take a closer look to realize this.

We must save ourselves sometimes, despite the trust many people have put in their faith. The poem “I Heard a Fly Buzz – When I Died” is a poem about death. The speaker has already died, and speaking from the grave, they describe the last few moments of their life. Before the speaker is about to reach “the light” (Dickinson 14), the buzzing fly that is in the room comes between the speaker and the light. The conclusion of the poem is truly ambiguous and leaves the reader wondering whether or not the speaker reached what would seem to be heaven.

It also causes the reader to question if heaven, to Dickinson, is even real or not. The fly coming between the speaker and heaven is representative of reality. The speaker was hoping that before they died, they would be greeted by god, or perhaps Jesus. Dickinson really seems to question god’s existence in this poem. She conveys the fact that many humans try to console themselves with stories about god and heaven. Even when the speaker is about to die, they are hopeful to be greeted by god or jesus, but this is really not the case.

Heaven does not provide an afterlife, if heaven really even exists at all. Life is the only tangible thing. The fly interrupting the silence illustrates the ordinary, the average, every day tangible things. Although Emily Dickinson was a religious woman, I did interpret this poem as having an agnostic theme about it. It even leads me to believe that Dickinson was unsure herself if there was truth to faith, and if god was real. She recognized that people liked to almost fantasize about a softer side of death.

I believe that people who claim to have very strong faith are guilty of that. Knowing, or at least hoping that you will be taken to heaven by god when you die is a comforting thought. People don’t like to think about the harsh reality of death. As in “Faith is a fine invention” Dickinson points out that faith is something that man has created. If man has created it, can it actually be real? The way she questions faith in many of her poems would convey to the audience to believe that she had very deep struggles with her own faith and religion. 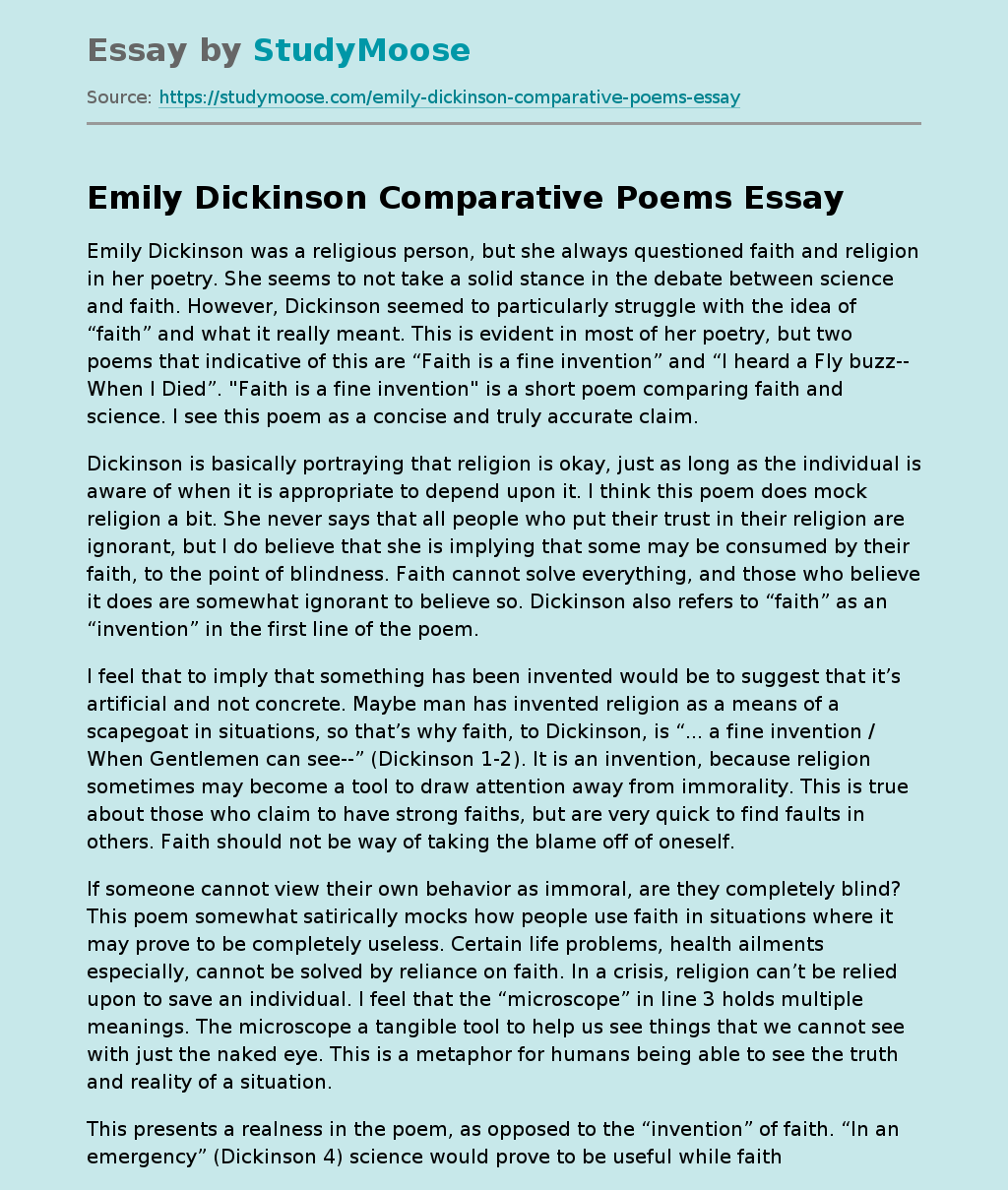