Emily Dickinson became a world renowned poet after her death. Much of her work involves the use of nature as a metaphor along with common meter. Dickinson uses metaphors to present her interpretation to both the world around her, and the thoughts within herself. We will be analyzing Dickinson’s views of death and how they compare in poems like “I heard a Fly buzz when I died” and “Because I could not stop for Death”.

In both works, Dickinson describes the experience of death.

Don't use plagiarized sources. Get your custom essay on
“ Analysis between Two Emily Dickinson’s Poems  ”
Get custom paper
NEW! smart matching with writer

Death is something that is unavoidable, but not necessarily negative. “Because I could not stop for Death –He kindly stopped for me – The Carriage held but just Ourselves –And Immortality.” (Dickerson, Stop). Though the narrator appeared to be busy, we can see that death had stopped to wait for them and take them to eternity. It can be said that Dickerson is hinting at the afterlife and how positive it can be. Just because our lives as humans end, does not mean that all is over.

In “I heard a Fly buzz when I died, Dickerson chooses to focus on the moment before death. The Narrator is at their final moments on their deathbed when they notice a fly. Typically a fly is only seen as a nuisance. However, in this case, the fly become the center of the narrators attention: “With Blue – uncertain – stumbling Buzz – Between the light – and me – And then the Windows failed – and then I could not see to see –“ (Dickerson, fly).

The only thing between the final “light” and our protagonist is the uncertain, stumbling buzz of the fly. Why did the fly become so interesting? It can be said that the fly only became interesting because it may have been the last worldly thing they would see. To be held up from death due to the buzzing of a fly can be seen as, at the very least, truly significant towards ones final thoughts in life. The narrator has given up all possessions and has prepared for death with their loved ones surrounding them.

The only left to observe in death is what was missed during life. Death in this case can be seen as a metaphorical eye opener. Dickerson may be saying that though we must someday close our eyes for good, that final moment will give us the chance to open our eyes to the most overlooked things around us. 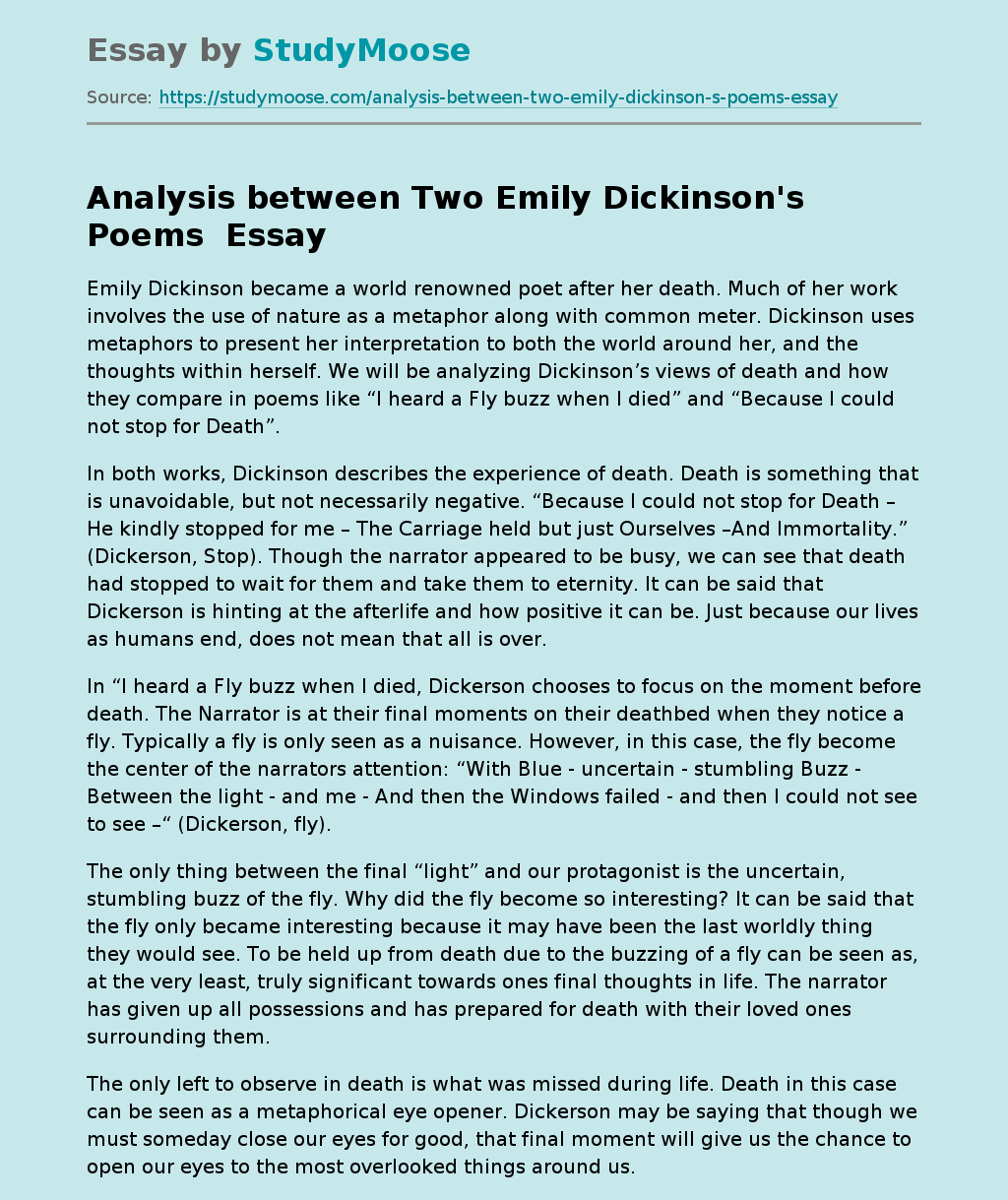