The Analysis of The Poem #280 by Emily Dickinson

Adroit (noun) – clever or skillful in using hands or mind. In her poem #280, Emily Dickinson describes her insanity caused by her isolation from the outside world. The first time the poem is read, it may seem like she is recalling a moment from her past, which included a funeral of someone she knew – maybe even her parents. If the poem is read closely, it becomes clear that the speaker is not sane. The most obvious part is the rhyming. In the first four stanzas, the rhyming is the same – it is A B C B.

Don't use plagiarized sources. Get your custom essay on
“ The Analysis of The Poem #280 by Emily Dickinson ”
Get custom paper
NEW! smart matching with writer

In the last stanza, however, there is no particular rhyming at all. This break from predictable pattern represents the speaker’s departure from sanity. In the first stanza, the speaker talks about the funeral in her brain. With only one line read, we can interpret that it was not a real death, but a death of her sanity. Mourners symbolize her only rational thoughts left. These rational thoughts keep “treading” in her brain and try to bring the sense and sanity that the speaker is losing.

In the second stanza, the rational thoughts stop “treading” and sit down, which symbolizes her brain giving up and her becoming insane.

She also talks about the beating from the Drum, which made her “mind go numb”. This symbolizes how the speaker is hallucinating. There is also repetition, which is similar to the first stanza. She seems to repeat her own thoughts, so she would not lose them completely. In the third stanza, her rational thoughts, represented by the Mourners, take the Box away.

The Box is the coffin in which the speaker’s sanity now lies. She also states that these rational thoughts took it away “With those same Boots of Lead, again.” Boots of lead symbolize force. The speaker’s sanity was taken with force. The words “same” and “again” tell the reader that it is not the first time the speaker loses her sanity. In the fourth stanza, Dickinson talks about the importance of listening and also compares herself to silence. This is factual, because Dickinson never left her home and almost never talked to anybody. She calls both herself and silence a “strange race”, admitting that she is strange and there are not many people like her. Silence is also very uncommon in the real world.

The Analysis of The Poem #280 by Emily Dickinson. (2016, May 21). Retrieved from https://studymoose.com/the-analysis-of-the-poem-280-by-emily-dickinson-essay 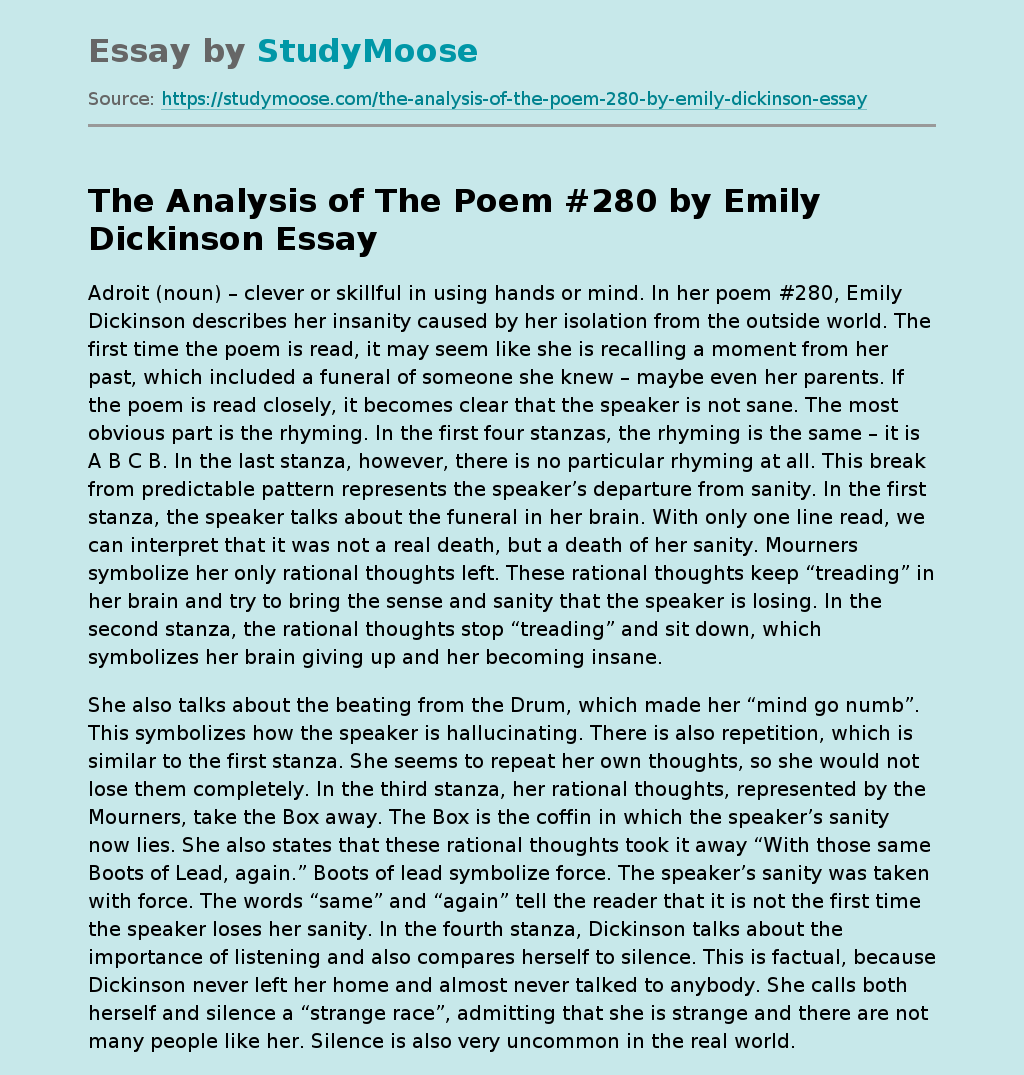