“The Ormolu Clock” is a short story written by Muriel Spark, who is considered to be one of the 50 greatest British writers since 1945. Dame Muriel is a poet, writer of fiction and literary criticism, and biographer – went on to win most of the literary awards going, was never out of print, and was at the top of her profession, internationally, for more than half a century.

The story under discussion begins with the description of two hotels standing side by side and separated by a narrow path – the Hotel Stroh and the Guesthouse Lublonitsch.

Turn in your highest-quality paper
Get a qualified writer to help you with
“ Analysis “The Ormolu Clock” by Muriel Spark ”
Get high-quality paper
NEW! AI matching with writer

The first one is a disappointment for its visitors, what can’t be said about the second. The story goes on to tell that the author had a chance to get acquainted with the owner of the Guesthouse – Frau Lublonitsch, who was a very hardworking woman. Once he saw her bedroom he was moved by the sight. The room was richly established and there was a large ornamental clock known as ormolu.

Under consideration belongs to the belles-lettres functional style, the main aim of which is to give the readers aesthetic pleasure and to make them think. It is an entrusted narrative and is told in the first person from the viewpoint of a visitor of Frau Lublonitsch’s house. The use of various types of narrative allows the author to create plausible characters. The dialogues are used in the personage’s speech as well.

In this short story women dominate men. The proof of it is that the indefinite article is used before the name of Herr Lublonitsch ( There was a Herr Lublonitsch, but he was of no account).

Also the 1st paragraph ends with sentence “But she was undoubtedly the boss.” which marks Mrs. Lublonitsch’s superior position in the relationship of the couple.

The story under consideration abounds in different stylistic devices. The most recurrent are metaphors which add up to the emphatic description of the protagonist’s emotions and thoughts (mouth turn down, smell its quality, strip of land, ome of sons emerged from) also epithets (humorous face, opulently dull, nervous stormy night). The detachment is used here as well (She scoured the huge pans herself; wielding her podgy arm round and round.) It specifies the manner of doing the action.

In the text there are also various types of repetition: catch repetition (The maids called her Frau Chef. Frau Chef prepares special food…),morphemic repetition (drinking, greeting the guests, receiving as much attention…), lexical repetition (as she emereged from the kitchen wiping her hands on her brown apron, with her grey hair drawn back tight, her sleeves rolled up, her dingy dress…;She owns all the strip of land… She’s got three farms.. She may even expand across the river…) This SD underlines Mrs. Lublonitsch’s domination, power and strength, it shows that everything belonged to her only.

The Inversion used here gives emphasis to the situation.(Appended to the guesthouse was a butcher’s shop; In the garden grew one useless thing, within it was a bedroom…).

The author resorts to the use of descriptions of Mrs. Lublonitsch and her room. He opposes her appearance of a peasant to the imperial magnificence of her bedroom. (she emereged from the kitchen wiping her hands on her brown apron, with her grey hair drawn back tight, her sleeves rolled up, her dingy dress…) And with the use of similie he compares her to a peasant ( She went and fetched a cloth and mopped up the mess herself, like any peasant…). For the description of her room the author uses various detachments that serve as descriptive details ( I saw a canopied bed, built high, splendidly covered with scarlet quilt). Also the colors make a clear contrast of Mrs. Lublonitsch’s personality: grey, black, brown describe her as a working woman, therefore gold, red, scarlet in the description of her room symbolize that she lives like a queen).

The most recurrent words: possession, she, the boss, herself acquire the status of the key words. “The ormolu clock” is a symbol of the time that was ticking for Mr Stroh, reminding him who the boss is. Though it is no longer in his possession it still has an influence on him. ). In the course of the whole story the clock dominates Mr Stroh’s life and his acting. Finally, he “gave up his gazing; he went indoors, sullen and bent”. That means that he is defeated by the clock, its authority has dominated in the scene. The message is that Mrs. Lublonitsch’s appearance was contrasting with her real possessions, which she wanted to expand. 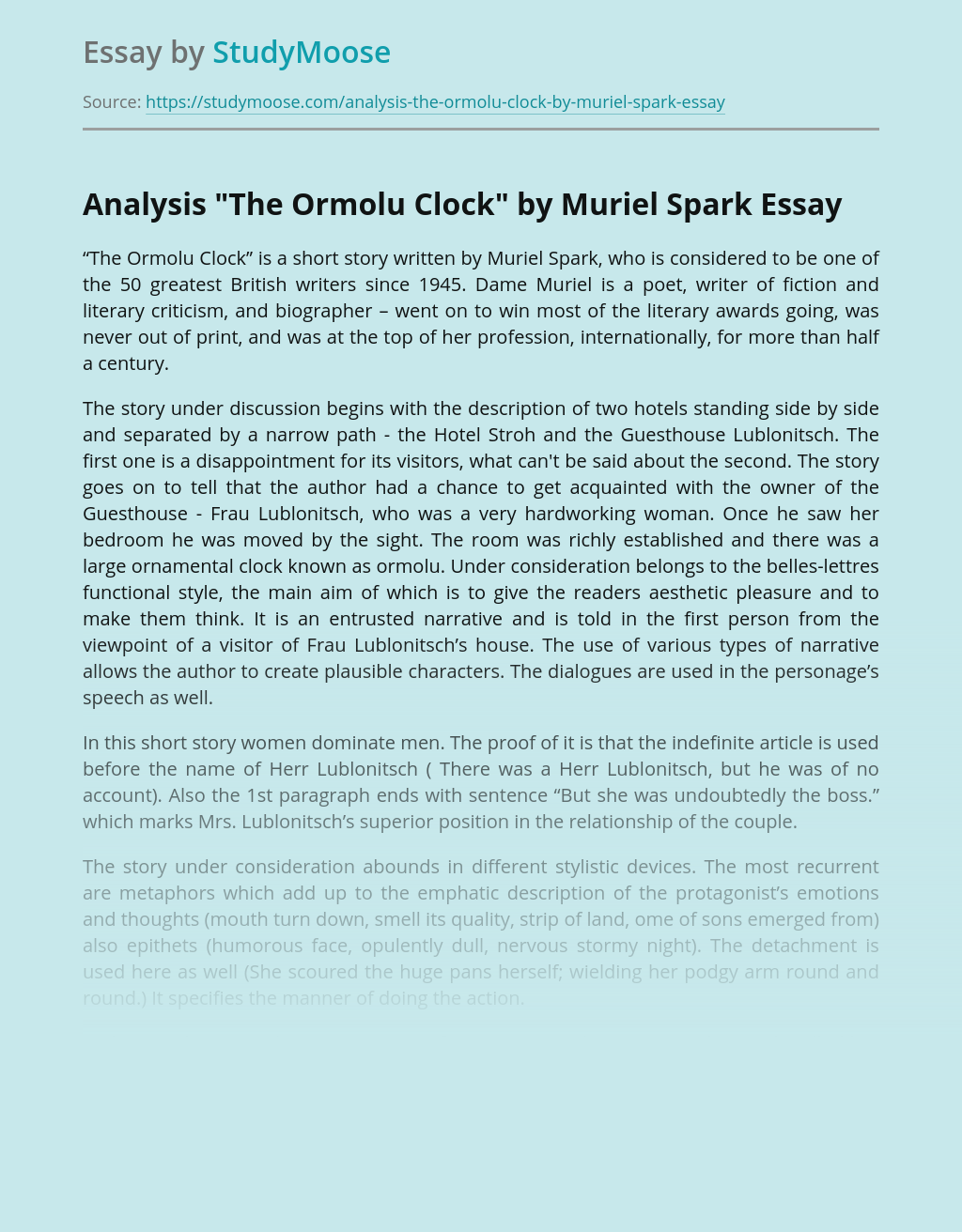 Turn in your highest-quality paper
Get a qualified writer to help you with
“ Analysis “The Ormolu Clock” by Muriel Spark ”
Get high-quality paper
Helping students since 2015
Stay Safe, Stay Original