Analysis of the last scene in the play “The History Boys”

Analysis of the last scene in the play “The History Boys”

This extract captures the end of the play so well. The opening statement gives the impression that the play is coming to an end. Irwin is presented in his wheelchair. This is a reminder that the audience should not forget that Irwin had been involved in an accident. It is during the accident that he broke his legs.

Turn in your highest-quality paper
Get a qualified writer to help you with
“ Analysis of the last scene in the play “The History Boys” ”
Get high-quality paper
NEW! AI matching with writer

Presently, he can’t walk. He can only use a wheelchair to move around. In the opening statement, we are told that photographs of Hector as a young man were being displayed on the screen. Again, this is used to emphasize the fact that he is not alive at present. The audience is made to recall what sort of a person Hector was when several photographs of him as a young man are flashed on the screen. The demise of Hector is symbolically emphasized also by the song that the boys are singing: ‘Bye Bye Blackbird’.

When they sing this song, it brings out a sad mood. The effects of the song cause melancholy to grip the audience as they are made to feel the deep absence of Hector. By extension, the song also helps bring the message of sympathy towards Irwin, who is in wheelchair.

As the play in this extract begins, the Headmaster speaks about Hector. He praises him as a person who loved language and a person who molded his students to understand literature and language.

But the tone that he uses captures his emotions has he remembers Hector. He seems to be in great pain and sadness because of Hector’s death. This is a good way of ending a play. It is worth showing the audience that the dead character had a significant contribution in the development of the story. In addition, flashing back connects the audience to the story in a solid manner. That is to say that the audience feels a part of everything that is happening in the play. In this case, when the Headmaster mentions Hectors’ past and how good he was, the audience feels the sadness that surrounds the fact that he died.

Furthermore, the mood of sadness brought to the surface by the Headmaster is propagated by some of the students. However, these students recall Hector by the way he did his things and the way he talked. For instance, Timmssays that he never understood some of the things that Hector said. Lockwood himself thought that Hector was an extraordinary teacher. He jokingly says that he realized that Hector was a human being when he heard him complain of being a teacher in that school. He had referred it as a ‘godforsaken school’. What Lockwood meant is that Hector loved to teach language and literature. He, therefore, didn’t expect to hear him complain at all. However, this attitude of Lockwood paints a better picture of Hector to the audience with regard to how his students viewed his teaching.

The past about Hector had its pitfalls. He messed severally and did some things that his students cannot forget. Crowther says that he had done many ‘unforgivable things’. Perhaps this utterance refers to the time that Hector had been found fondling with a boy. This brought him out as a homosexual. According to Crowther, this act was abnormal and thus refers to it as unforgivable. It is important to mention that the tone with which Crowther utters this statement reveals distaste. He appears to have developed a negative attitude on Hector perhaps on the grounds of his sexual orientation. He appears to feel less remorse for the fact that Hector is dead. He casually says, “Even his death was a lesson and added to the store”. This emphasizes the fact that he felt no sympathy upon Hector’s death. For purposes of ending this play, it becomes important to know how some students felt about Hector. And the feelings of Crowther towards Hector cannot be ignored.

Furthermore, the Mrs Lintott, the History teacher, has her comments about Hector. She says that Hector never bothered with what he taught. In other words, MrsLintott means that Hector cared less about what he taught. The tone in her voice betrays her attitude towards Hector. She seems to have been bothered by the way Hector had been teaching. However, she remarks that his students ended up taking different careers in life. She simply and casually says that some became solicitors, others chartered accountants, others teachers among others. The students take different paths in life because Hector had been influenced them think beyond just passing exams. It can be said that he had a great impact on the lives of his students. This recounting of the lives of the students is a good marker to show that the play is coming to an end. It is important for the audience to know the lives of the characters as influenced by Hector, who appears to be the center of this passage. His contribution is being recalled.

Besides Mrs Lintott, students also take part in telling the audience what each of them becomes at the end of the play. For instance, Timms says that one of the students became a tax lawyer. He supports the claims that Mrs Lintott is making that Hector’s students succeeded in their lives. Dakin owns up to Timms’ claim to mean that he is the one being referred to as the tax lawyer.

As the discussion proceeds, Mrs Lintott humorously says that Hector had referred Irwin as a journalist instead of a history teacher. This is because of the view that Hector had on the way Irwin taught his History lessons. He did not teach history as was supposed to be taught. Instead, he taught students how to critically analyze the past. It is a claim that Irwin himself admits with a sense of humor. This is a way of further remembering what kind of person Hector was. He had a very different approach in teaching from that of Irwin. This is a nice way of bringing the story to an end because the audience feels that Hector had a significant position in the lives of those who lived with him.

Another positive impact of Hector in the lives of his students is illustrated by the mention of one of his students, Posner. Mrs Lintott humorously says that Posner remembers everything that he was taught by Hector in terms of language and literature. She supposedly says that Posner remembers the exact words of Hector. We find that this last part of the play is filled with what can be referred to as sweet memories of Hector. In the case of the Posner, there is a replica of Hector. Posner likes literature in the same manner that Hector did. He is ever present in the local library reading. This illustration is also contributing to a good ending of the story. It helps to further paint the picture of Hector.

Finally, Hector’s voice is used to utter the last words before the play ends. He is given this privilege to conclude what others have been implying about him. From the discussion held up by Mrs Lintott and others, we have realized that Hector was an exceptional person. To other teachers, Hector had a different approach to teaching. The students also felt the same. They felt that he made them understand what they were learning from a cramming point of view. However, they don’t make bad comments on him. Instead, they praise him. He has had contributions in the success of his students. They passed their final exams and are all successful people in life.

This passage explicitly talks about Hector, the English teacher who is not alive at the moment. We gather that he had died earlier on in an accident. Being a passage that is ending the play, it effectively captures the attitudes of the rest of the characters about Hector. The language used portrays a mix of moods; sadness and happiness. It is sad when everyone remembers the contributions that Hector had in the teaching fraternity and he is now dead. It portrays happiness when his sense of humor is recalled. In a nutshell, this passage is effective in the way it ends the play. The audience is left contemplating about Hector. It is nostalgic when his voice is given an opportunity to utter the last words before the end of the play.

Analysis of the last scene in the play “The History Boys”. (2015, Oct 31). Retrieved from https://studymoose.com/analysis-of-the-last-scene-in-the-play-the-history-boys-essay 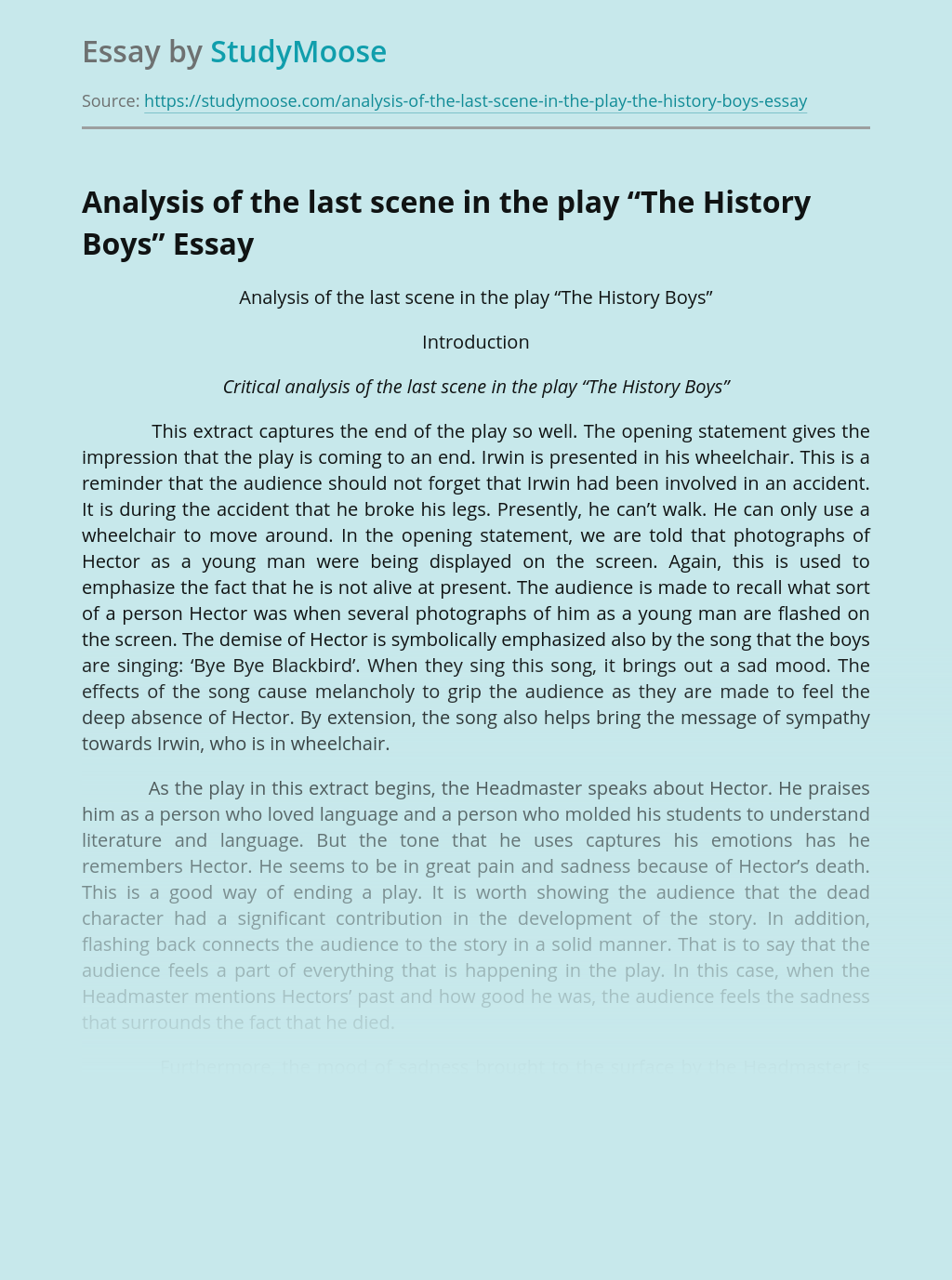 Turn in your highest-quality paper
Get a qualified writer to help you with
“ Analysis of the last scene in the play “The History Boys” ”
Get high-quality paper
Helping students since 2015
Stay Safe, Stay Original