Women's roles within the History Boys

Dramatic comedy often sees the woman take on a role of insignificance. They become the prey, the desired possession and are not seen as equal beings to male characters. This has been apparent throughout history from the very birth of comedy. Plautus for example developed his comedy from the Greek’s new comedy and so also inherited a bias against woman. Any female that did appear within his works fit effortlessly into one of several stereotypical categories; the puella or young maiden, the matrona or married woman, the meretrix or courtesan, the ancilla or handmaid, and the anus or old woman.

Don't use plagiarized sources. Get your custom essay on
“ Women’s roles within the History Boys ”
Get custom paper
NEW! smart matching with writer

Many are never seen, merely discussed and others are seen but do not speak and never are they the protagonist of the play. Within The History Boys, Alan Bennett introduces one meretrix who is never seen, two matrona who are also never seen and one ancilla who could be argued to be the one exemption from the tokenistic nature of the woman in the History Boys.

Proficient in: Women's Role In History

Mrs Lintott slots into the stereotype of the ancilla as she is witty and capable of interacting within the male world of the play. She represents feminism and presents the idea that not all woman are simply sexual objects to be admired and hunted. However, she seems to submit to the idea that men are in fact better at her beloved subject than her. “Men are, (clever) at history, of course.” Despite this she still maintains a somewhat elevated stance on the situation.

In dramatic comedy sex is a common theme. The audience find it relatable and amusing. For example during the French scene where the boys enact the life inside a brothel the audience cannot help but find humour in the bizarre situation in which the boys pretend to be “Les Femmes de chambres” and Dakin ends up with his trousers around his ankles before Hector, Irwin and The Headmaster. Dakin is central to the sexualising of woman within the History boys. He is the one that knows in French what a “maison de passe” is contrary to the other boys, excluding Posner. The boys then become meretrices, entrancing prostitutes who seek to enthral the men who visit the brothel and relieve them of their money through extortionate pricing. The women they become are most likely the ones they fantasize about again presenting the idea that women are just seen as being objects used for sexual pleasure with little depth.

As the play progresses it soon becomes apparent that Dakin is not only the most obsessed with sex but in fact the most experienced as we are faced with his repeated attempts to “move up to the front line.” This crude metaphor for trying to seduce Fiona links to the boy’s study of the Somme suggesting that the pursuit of a female is almost like going to war, a war that eventually Dakin is sure he will win with no thought to Fiona’s feelings. Fiona is seen as the prize, or at least her body is. There is no mention of her personality or attributes.

“It’s like the Headmaster says: one should have targets.” Later on we learn that the Headmaster has in fact been “trying to cop a feel” of Fiona as well by “chasing her around the desk.” This makes the audience think of Fiona as a victim, the poor defenceless young maiden or puella. In Plautus’s comedy the puella tends to be the least dramatically or comedic ally interesting of female characters which is somewhat true of Fiona whom we never know. Dakin gains respect for his attack on Fiona and his status is elevated amongst the boys. [4: The History Boys, Scene 8][5: The History Boys, Scene 6]

Women seem only to really serve as plot devices, used to deepen our understanding of the situation or character. For example Mrs Lintott and Irwin discuss Hector and his wife. Hector is sure his wife doesn’t know but Mrs Lintott is quick to judge his wife. “I imagine she’s another one who’s sort of known all along.” This both somewhat deepens our sympathy towards Hector who seems to be trapped in a “lukewarm” marriage whilst also depicting a very tokenistic female character whom despite knowing of Hector’s preferences chooses to stay with him simply for safety and not for love. However the fact that Mrs Lintott realises this and is able to discuss her take on it with Irwin paints a very different image of female characters presenting the idea that women are not all like that.

Mrs Lintott is not afraid to speak out on subjects she feels strongly about, for example when the teachers are running a mock interview for the boys she reveals her somewhat inspiring feminist views to the boys hoping for a response but instead is treated to silence and yawning. “History’s not such a frolic for women as it is for men.” Her points grow in significance and are almost heightened by the non-existent reaction from the boys showing that what she is saying is true.

Even though she is now allowed to speak as centuries ago she would not have, she is still not listened to and her views are not respected by the boys as Irwin’s are. Bennett suggests she is seen simply as their teacher and a woman despite the fact that what she says is usually unbiased truths compared with the other characters. Bennett uses the metaphor of women following men around with a bucket to suggest that without them nothing would progress or get cleaned up as men have left a lot of mess behind them for women to clean up throughout history.

She is used mainly as narrative character, not to drive the plot as the other male teachers do, this is because she is unable to think about things in a non-factual way as Irwin does or debate in an opinionated, moral way as Hector does so is not a part of the ‘special lessons’ that are central to the plot. Yet, even though she is shunned, this means she is able to give other characters a voice that they may not otherwise have had. She acts as a confidant to Rudge but not in a stereotypically motherly way. She instead acts as the anus, Plautus’s old woman or wise woman, revealing truths and acting as a guide. She becomes the voice of Bennett, a medium for him to convey his feelings on the matter.

Despite Mrs Lintott’s feminist approach to life she seems to fins her place in the male dominated world of the school by adhering to the common use of sex in conversation for comedic effect. She frequently uses subtle innuendos “Other things, too, of course, but it’s the pizza that stands out.” She suggests that pizza is in fact better than sex contrasting to the boys’ view of sex as being the ultimate goal in life. This is of high comedic effect as it seems surprising to us that Mrs Lintott would speak about sex so brashly. Her nickname “totty” adds to this image whilst being ironic as it become evident that Mrs Lintott is not fitting to this description. [6: The History Boys, Scene 3]

The entire plot is centred on a male dominated school in the 80’s where the idea of women being equal to men had still not been accepted by many people. Feminism was a relatively new theory making Mrs Lintott a more interesting character in context then how we see her now. The school is boys only which increases the significance of the few female characters that are mentioned. I believe Bennett wanted to show how despite women have had a vital part in History, they are still thought of as insignificant but he doesn’t make Mrs Lintott a protagonist giving the idea that in face he thinks that in some ways women do bring it upon themselves.

This is echoed by the mention of Hector’s “unsuspecting wife.” In the History Boys I do believe the women to be marginalised and tokenistic but I think Bennett did this to show that this is how women are perceived and not simply for comedic effect as some may argue. Bennett both challenges the norm and conforms to it allowing the audience to formulate their own opinions on female characters meaning the women in The History boys cannot be categorised either.

Women's roles within the History Boys. (2016, Aug 15). Retrieved from https://studymoose.com/womens-roles-within-the-history-boys-essay 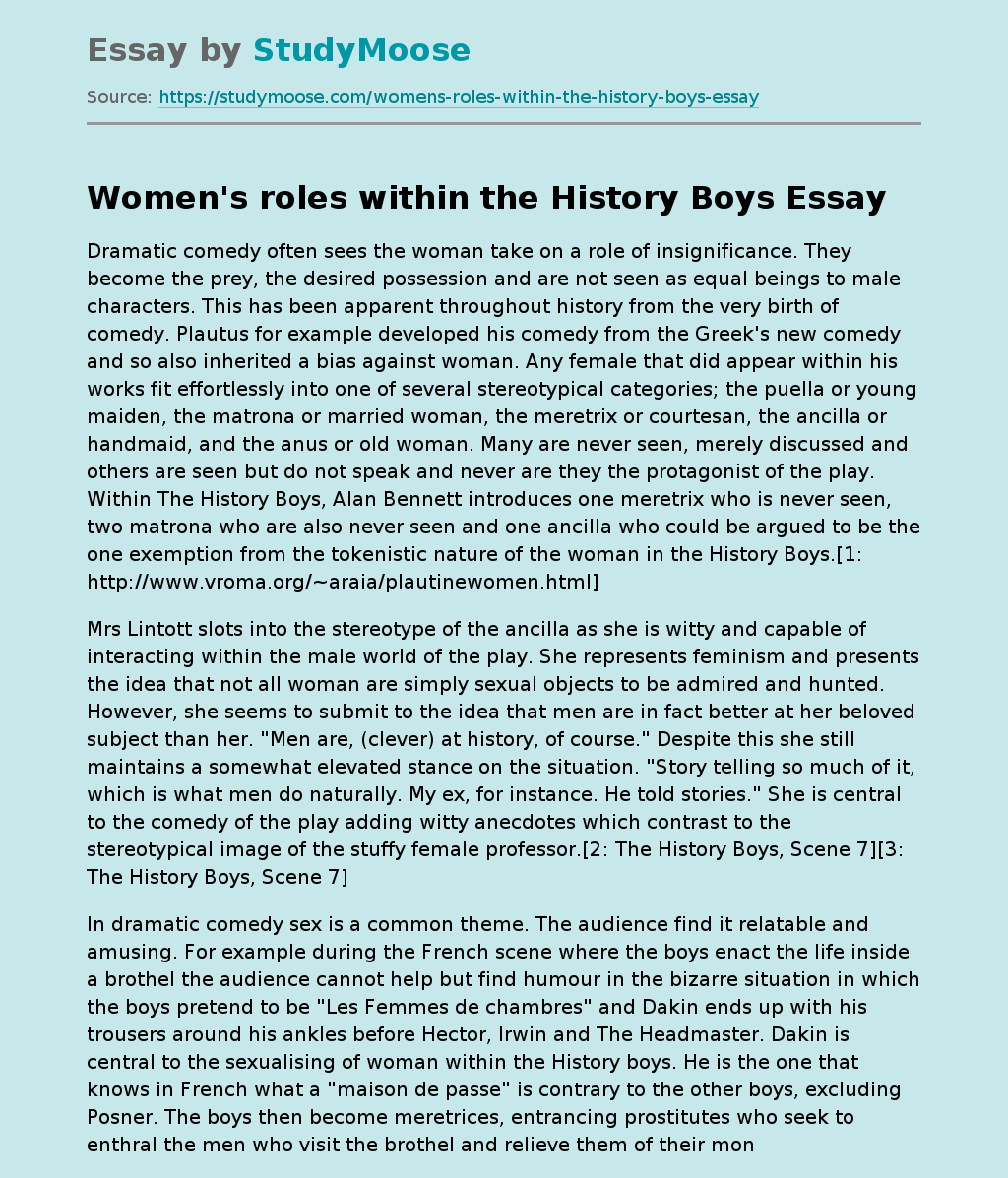