Gender Roles and Relationships within Families

Gender Roles and relationships within families. Different sociologists have had different views to whether conjugal roles have become equal. Researchers have measured different aspects of equality in conjugal roles. Some have focused on the division of labour in the home. They have examined the allocation of responsibility for housework between husband and wife and the amount of time spent by spouses on particular tasks. Others have tried to measure the distribution of power within marriage.

Willmott and Young, and Gillian Dunne are amongst those who have argued that conjugal roles are equal.

Don't use plagiarized sources. Get your custom essay on
“ Gender Roles and Relationships within Families ”
Get custom paper
NEW! smart matching with writer

However many sociologists such as Ann Oakley, have carried out research into the area of conjugal roles and have found little evidence that couples share equal division of domestic tasks.

Willmott and Young tend to agree that conjugal roles have become more equal. During the 70’s they announced the arrival of the symmetrical family, a family where husbands and wives were similar in their roles. In the home the couple ‘shared their work and shared their time’.

Husbands were thought to be helping with the housework, childcare and decision making more often. Willmott and Young discovered that 72% of husbands helped with these household tasks.

They thought that the change from separate to joint roles resulted mainly from the withdrawal of the wife from her relationships with female kin, and the drawing of the husband into the family circle.

Ann Oakley is one sociologist who criticises this view of Willmott and Young. In 1974 Oakley pointed out that included in this 72% figure were husbands who did very little, only had to perform one household chore a week.

During the 1970’s she collected information on 40 married women who had one child or more under the age of 5 and were themselves aged between 20 and 30. Half of her sample was working class and half was middle class. She found greater equality for domestic tasks in the middle class than in the working class.

However in both classes few men had a high level of participation in housework and childcare. She found that most wives saw these jobs as their own responsibility, where only 15% of men in marriages participated in them at a high level. Sociologists such as Ann Oakley have argued that women have increasingly been taking on a dual burden: they have retained primary responsibility for household tasks while also being expected to have paid
employment.

Jonathan Gershuny agrees with Ann Oakley and disagrees with the statement that conjugal roles have become equal. He points out that dual burden could lead to increased inequality between husbands and wives as a rising proportion of women suffer from it. He believes that dual burden is a result of lagged adaptation where there is a time lag between women taking up paid employment and men adapting to this by increasing their contribution to domestic labour.

In 1992 Gershuny studied the changes in hours worked by men and women over time, analysing data from 1974/5 to 1987. It showed a gradual increase in the amount of domestic labour performed by men. This increase was greatest when wives were in full-time employment. Husbands whose wives worked full time doubled the amount of time they spent cooking and cleaning. Gershuny concluded that though women still bear the main burden of domestic labour, there is a gradual trend towards greater equality. However it is still a long way off from becoming equal.

In conclusion from the evidence presented it is clear that there is little support to Willmott and Young’s study that conjugal roles have become equal. Gillian Dunne however suggests that household tasks and childcare in single sex relationships have become equal, but haven’t in heterosexual relationships. There is though a trend towards greater equality. Gershuny’s research into childcare all suggests this trend. Therefore it appears that conjugal roles have not become equal, but evidence shows they are becoming more equal.

Gender Roles and Relationships within Families. (2016, May 31). Retrieved from https://studymoose.com/gender-roles-and-relationships-within-families-essay 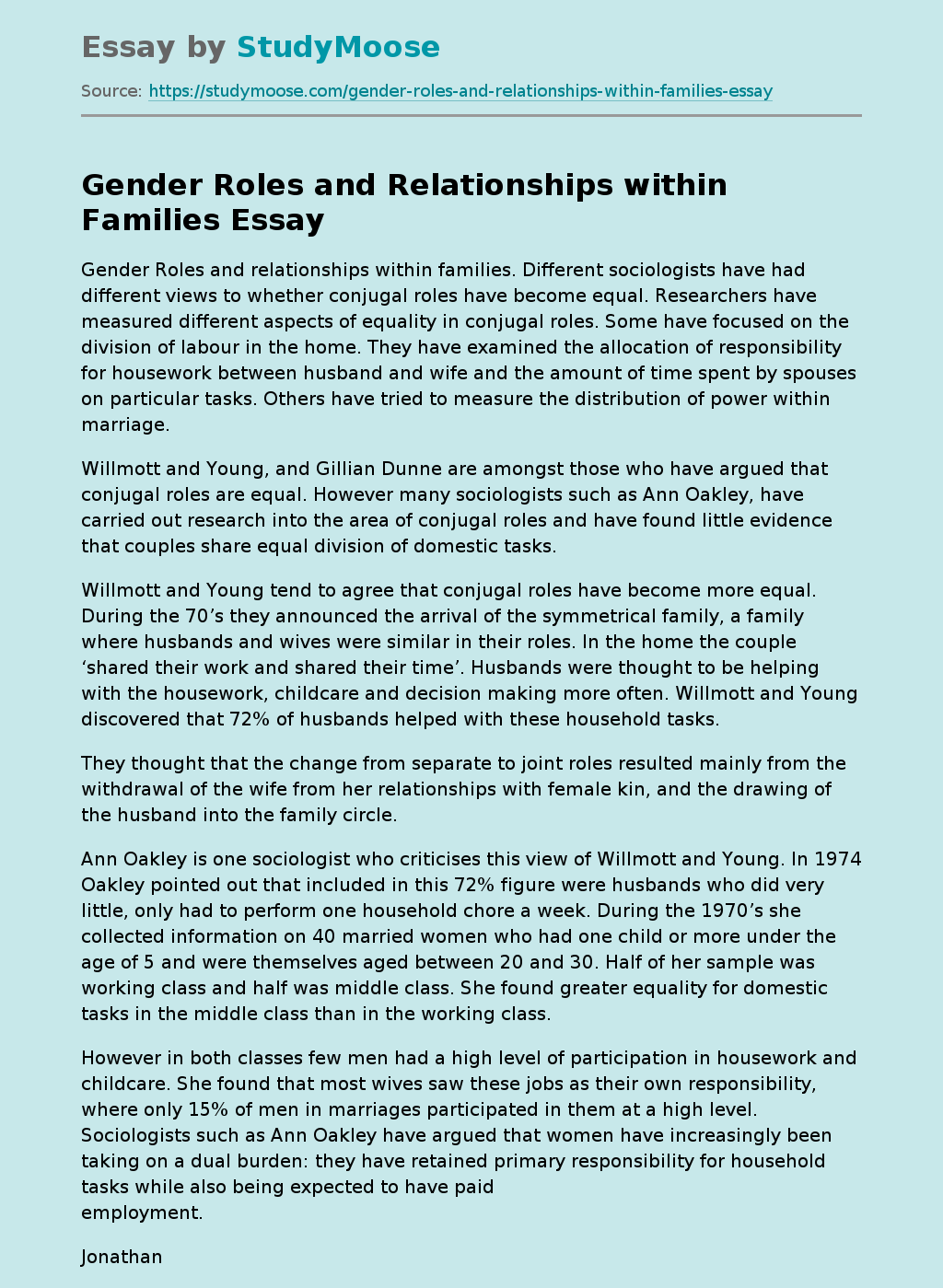