Gender roles in Pride and Prejudice and A Thousand Splendid Suns

The idea that gender roles are pre-determined by society is explored within Pride and Prejudice and A Thousand Splendid Suns. The time period was saturated by patriarchy as male dominance was prevalent. Throughout both novels we are shown how the upbringings of females living in different society standards has led to a different outcome which is portrayed in their actions and behaviour.

A reader would comment on the significance of Mariam’s treatment from Nana and how that has already put her at a disadvantaged position within society as she is isolated and does not have a typical childhood of that time period.

Don't use plagiarized sources. Get your custom essay on
“ Gender roles in Pride and Prejudice and A Thousand Splendid Suns ”
Get custom paper
NEW! smart matching with writer

“Mariam was five years old the first time she heard the word Harami. “Harami” is a derogatory term meaning outcast. A reader may comment that Mariam is made isolated as her only sin was being born outside of her parents’ marriage, thus bringing shame to the family name and being an undesirable asset to them. Mariam was raised by her Nana on her own and although Jalil does appear to show affection to Mariam, It can be argued that he never had the strength to accept her legally.

Jalil’s decision to never acknowledge his daughter could reflect his fear of humiliation from society. This affects Mariam in a negative way as this type of shame has the power to inflict deep psychological damage which is evident throughout as she has low self-esteem, confidence and self-worth. Hosseini’s choice to include this could be justified by the Taliban laws.

A reader may comment on the significance of “no money” as this could suggest that the society she has grown up in, she understands that having a lack of money and being a female you cannot excel in life. Marriage was seen more as an economic arrangement and making sure that the female has financial security as well as being able to increase the status of herself and her family. This could suggest that a female is viewed more like an asset than a human. These ideas portray the negative effects of societal expectations on females as they were only expected to be housebound and reliant on the male characters implying that these roles have already been set out by society. A reader may comment that Austen has shown these negative impacts of marriage to expose the flaws within society and the prejudice women had to endure.

On the other hand, it can be argued that Mariam and Rasheed share a relationship full of manipulation and guilt in A Thousand Splendid Suns. In the opening first few pages of the book Nana warns Mariam “Like a compass needle, that points north, a man’s accusing finger always finds a woman.” Hosseini may have done this to highlight the injustice women faced on a daily basis. As a reader we feel empathetic towards Mariam as no matter who is wrong and right, the woman is always given the unfair blame. The simile could also suggest that it is inevitable for a man to blame a women just like a compass will always point north. It can be suggested that the advice Nana gave to Mariam was proven true later throughout the novel as Mariam is blamed for being infertile, having a lack of education and any other matter which is outside of her control. A modern audience would see this as atypical for our society because Mariam and Rasheed were both involved in the act of having a child and therefore they both bear the responsibility of raising the child. However, this is flawed during the 1970’s as whilst men were dominant and could have multiple wives, women were expected to stay chaste and within the boundaries of their homes, this indicates the hopeless Afghan women would feel during the 1970’s. Hosseini may have done this to reflect the unfair treatment women in Afghanistan had to deal with. Furthermore, he may have wanted to raise awareness of what it is like to be an Afghan women and give women a voice where they have no voice in society.

The idea that society is able to modify and manipulate gender roles depending on their perspective of women is supported in A Thousand Splendid Suns. Rasheed inflicts the words of the Taliban onto Mariam and by bringing in God, he makes his opinion sound factual. The Taliban are a group of extremists who have radical ideas of Islam, they twisted the words of God and the Holy Scriptures to suit their idyllic views. It can be argued that Rasheed is a product of the Taliban’s and imposes their views onto Mariam which can be seen when he states that ‘God has made our brains different. You are not able to think like we can’. This shows that Rasheed places himself on a pedestal above Mariam. Rasheed knows that Mariam has a strong faith and he uses religion as a malicious tool to make Mariam believe that she is inferior to Rasheed to ensure that she does not ever believe in woman empowerment. During the movement of the Taliban throughout Afghanistan, one of their main beliefs around women were that they must not be in power nor should they be equal to men, However the Qur’an teaches equality for all. A reader may comment that the reason that the oppression of women is like this is that the Taliban feared that if women become educated then this may cause men to lose their control and power in society which is why predominantly Afghan society restricted women of ever being exposed of knowledge at any time. A reader may note the significance of the advice that Babu gave to Laila “Marriage can wait. Education cannot” suggesting that Babu is ahead of his time and understands the importance of having an education, especially in societies where women are not valued or seen with an equal eye. In an interview, Hosseini explains that he wrote this novel to highlight the subjugation women faced by the Taliban and society on a daily basis, “I am from Afghanistan. And although it’s not my intention to educate people about Afghanistan, I do hope that in some ways this novel gives people a window into Afghanistan” It can be suggested that Hosseini has been able accomplish this because as a reader we feel empathetic towards Mariam and her life as we learn more about the background of women and the struggles they have faced in previous history and still today.

Austen presents mockery into the societal expectations of women during the 19th century. The use of satire in the opening lines of the novel implies that Austen does not believe in what society deems a woman’s stance to be in society; “It is a TRUTH universally acknowledged, that a single man in possession of a good fortune, must be in want of a wife”. It can be seen in the phrase that the opinion, sounds more factually based. This may suggest that the perspective society had of women was that potential partners were not dependent on love, but were chosen depending on their wealth, status and appearance. This is later on proven true between Charlotte and Lucas whose marriage is perceived as more of an economic arrangement. The dehumanization of women could suggest that women were almost enslaved by men during this time period, as they had minimal freedom, and were expected to revolve around household chores. Moreover, the declarative “he is considered the rightful property of someone or other of their daughters” reinforces the societal expectations of females who are forced to marry as a business transaction. The objectification of females in the 19th century and the rapid engagements are often shown to be a key flaw of the failing marriages women had to suffer in.

It can be interpreted that Austen was progressive for her time and she may have opened the novel in this way as she was a firm believer of true love. She believed that women should marry for love and that marrying for motives such as wealth and status is no better than prostitution. This view is explored through Elizabeth who is challenged by Lady Catherine’s argument as she believes that Mr. Darcy is an unsuitable match. However, Elizabeth’s strength is shown by “He is a gentleman, I am a gentleman’s daughter, so far we are equal” women were expected to marry someone who can provide economical elevation instead of love. However, this view is challenged by Elizabeth as she does not care about money and does not believe that Mr. Darcy is superior to her. Alternatively, the reference to ‘gentleman’ implies women’s dependence on others as she addresses herself through a gentleman; a reader may comment that Elizabeth is aware of societal constraints however, exceeds these expectations as she attempts to have equal stance with a male character. On the contrary, in A Thousand Splendid Suns Rasheed overpowers Laila due to male dominance saturating the time period, this can be shown through the declarative threat “You try this again and I will find you · And, when I do, there’s isn’t a court in this godforsaken country that will hold me accountable for what I will do”, Rasheed’s character reinforces the idea of societal roles being pre-determined by society as Laila is unable to escape from him as she has nowhere to go. The independence of females is undermined by society as when Laila tries to subjugate Rasheed she is punished and cannot escape. The treatment of women within this passage would have been accepted within society as it reveals the oppression used by men during the time of war to frighten females into silence.

Gender roles in Pride and Prejudice and A Thousand Splendid Suns. (2021, Nov 11). Retrieved from https://studymoose.com/gender-roles-in-pride-and-prejudice-and-a-thousand-splendid-suns-essay 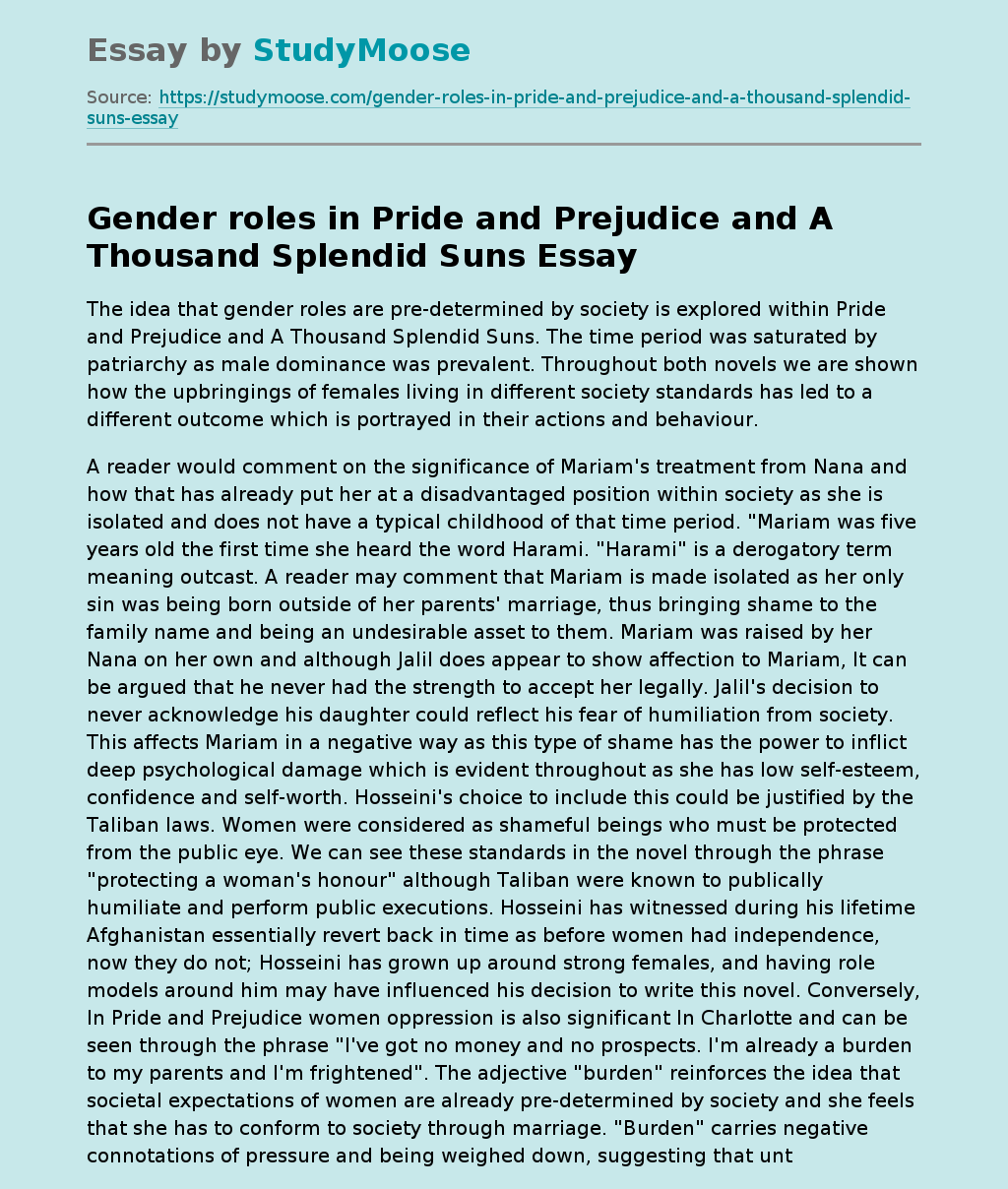