Butcher Boys is a work of art created by Jane Alexander in 1985-86. Jane Alexander is a caucasian female who was born in Johannesburg South Africa in 1959, and grew up in South Africa during the tumultuous political and cultural atmosphere of apartheid and the fight for civil rights. This location, or more specifically the cultural, social and political aspects of this location, affected Alexander’s work, Butcher Boys. The artist states, “my work has been a response to the social environment I find myself in.

Apartheid happened to be the important political condition at a certain time, and it still impacts my perception of social environments now, here or abroad”. (Dent). Alexander still resides in South Africa and currently teaches at the Michaelis School of Fine Arts in Cape Town (Bick 30).

Butcher Boys is a work consisting of three plaster-cast, life-size naked figures that embody both human and inhuman characteristics. The human characteristics include arms, legs, hands, feet and torsos that are combined with monster like heads with decaying horns, dark eyes, cleaved backs, sutured chests, ear holes and lacking mouths.

The genitalia of the figures appear to be covered by codpieces. The three figures are seated on a bench in a mundane position that could be seen in a “doctor’s office waiting room” or similar to “athletes on the bench.” (Klassmeyer). This exhibit is not separated from the audience by rails or boundaries, but is on an equal level to viewers, and therefore viewers are able to see the art piece from all angles.

The artist used oil paints to create the darkness of the defects of the figures making them seem more realistic.

This artwork was created by Alexander while she was completing a masters degree at the University of Witwatersrand. She may have chosen the media of plaster to create these figures due to the message she intended to portray. The possible message, which will be discussed in detail later, is controversial and addresses the large topic of apartheid. Perhaps the artist wanted to make a life-sized exhibit to make an impression and better communicate this important message. This exhibit is not just large but the humanoid figures are created to scale of the human form which makes the message more intimate and relatable to the general audience. Another reason why Alexander may have chosen plaster for this art piece, is that plaster is inexpensive and easily accessible. For a student, and I speak from experience, these are important considerations when choosing a medium to utilize. Therefore, plaster allowed Alexander to make the statement she intended within her constraints as a student.

In A History of Art in Africa, Suzanne Blier describes various categories that can applied to African art. Several of these categories apply to Jane Alexander’s piece Butcher Boys. Alexander utilizes innovation of form by adding innovations to the human figure to communicate her message. This symbolizes the inhuman characteristics of the culture of apartheid. This technique of creating human forms with inhuman additions has a realistic and yet surreal effect on the viewer. Visual abstraction is shown in this artwork by the deviation of the figures from the classic human form. Although the figures are in a very unremarkable position, they have cleaved backs, horns, ear holes and other inhuman attributes. Without the addition of these abstract characteristics, these figures would appear to be ordinary humans, and the thought provoking connotations of the piece would be lost.

The figures in the art piece are human like and represent human society. This shows humanism/ anthropomorphism. There are also three figures arranged together in this piece making this display an ensemble. The meaning of Butcher Boys is very intellectually complex, and can be interpreted in a variety of ways. Therefore the piece shows a multiplicity of meaning. The various interpretations of this piece will be discussed at a later point in this essay. The categories that do not apply to Alexander’s piece include parallel asymmetries and performance.
The cultural, political, and social circumstances that existed in South Africa during the life of Jane Alexander greatly impacted her art, and specifically the piece Butcher Boys. To appreciate the meaning of this piece it is necessary to understand the history of South Africa, the origin of the artist. Similar to other African countries, South Africa was colonized by Europeans including Dutch and later British immigrants.

The discovery of gold and diamonds in the mid 1800s brought an increase in attention to South Africa and therefore, an increase in immigration from European countries. The Zulu, an empire of the indigenous African population, was defeated by the British and the Dutch in 1879. These white immigrants over time established control of the indigenous populations by creating several laws and limitations. The Native’s Land Act of 1913 assigned 87% of the land in South Africa to the white population and 13% to blacks. The Mines and Works Act of 1911 assigned menial and manual labor to blacks and skilled labor to whites. During this time the indigenous population was denied many rights including the right to vote. In 1948, apartheid, a policy of racial segregation, was put into place by the ruling white population. This significantly increased the racial issues in South Africa. In the 1960s and 1970s South Africa encountered upheaval including several strikes and uprisings which resulted in many deaths. After this time South Africa experienced a continuous struggle between the black and white populations as the indigenous people fought for their civil rights, similar to what was experienced in the United States during this time.

During this time of racial turbulence, Jane Alexander created the piece Butcher Boys in 1985-86. This cultural, social and political framework had a distinct impact that is communicated in the meaning of this piece. As an artist, Jane Alexander is generally silent as to her intended meaning of her pieces ArtThrob). Therefore, the meaning of Butcher Boys is open to interpretation and there are a variety of perceptions of this piece. One possible intention of this piece is to create emotions within the viewers related to the horrors that took place during the apartheid era in South Africa. The figures in the artwork may represent the perpetrators of apartheid. The casualness of the appearance of the models in relation to the inhuman characteristics of each may communicate the good and evil within the white population involved in these atrocities.

This may show the revulsion that Alexander felt toward the white population while living in South Africa during apartheid. In contrast, these figures can also be perceived as representations of the black population. They show “dehumanized victims of apartheid’s crimes against humanity” (Bick 33) by the additions of horns, cleaved backs, and other inhuman attributes on the otherwise normal human form. It can be argued that the evil vs good theme displayed in this artwork portray the good and evil present in all of us. These sculptures have no genitalia or specific skin color and are therefore representations of humanity in general, and all viewers can relate the forms to themselves. This interpretation is intensified because the figures are life-sized and are not separated from the audience allowing them to become more intimate with the art piece. The human features of the sculptures cause viewers to relate personally to the figures, and ponder if the inhuman attributes represent the evil inside themselves.

Another interesting issue regarding the perception of Jane Alexander’s Butcher Boys occurred in February 2012. At this time, the South African band Die Antwoord’s lead singer Ninja dressed as a character resembling a figure in Butcher Boys in a teaser trailer for their album Tension. Die Antwoord speaks to the post-apartheid generation of the white population who is now experiencing a changing identity as the political and social entities in South Africa stabilize after a tumultuous past. Die Antwoord participates in “selecting, editing, and borrowing from available cultural resources to construct and perform a new white identity” (English). Jane Alexander communicated with the band after this release objecting to the band’s appropriation of the imagery of her piece. The band immediately removed the video and the lead singer responded that they used the imagery because Butcher Boys was one of the few South African art pieces that they were proud of. Reactions to this occurrence in South Africa have been mixed.

Butcher Boys by Jane Alexander was chosen for this essay because it was previously introduced to the class and the image was found to be both visually and conceptually stimulating. After reading the article Horror Histories: Apartheid and the Abject Body in the Work of Jane Alexander, the historical significance of this piece made it even more intriguing. Butcher Boys became even more compelling after research showed that this specific art work, as well as its history, impacted the band Die Antwoord, which is a band I appreciate. This piece is relatable to me personally because it shares many qualities of my own work which utilize the human form with alterations. I find the work of Jane Alexander to be inspirational and will draw from this experience in my future endeavors as an artist. 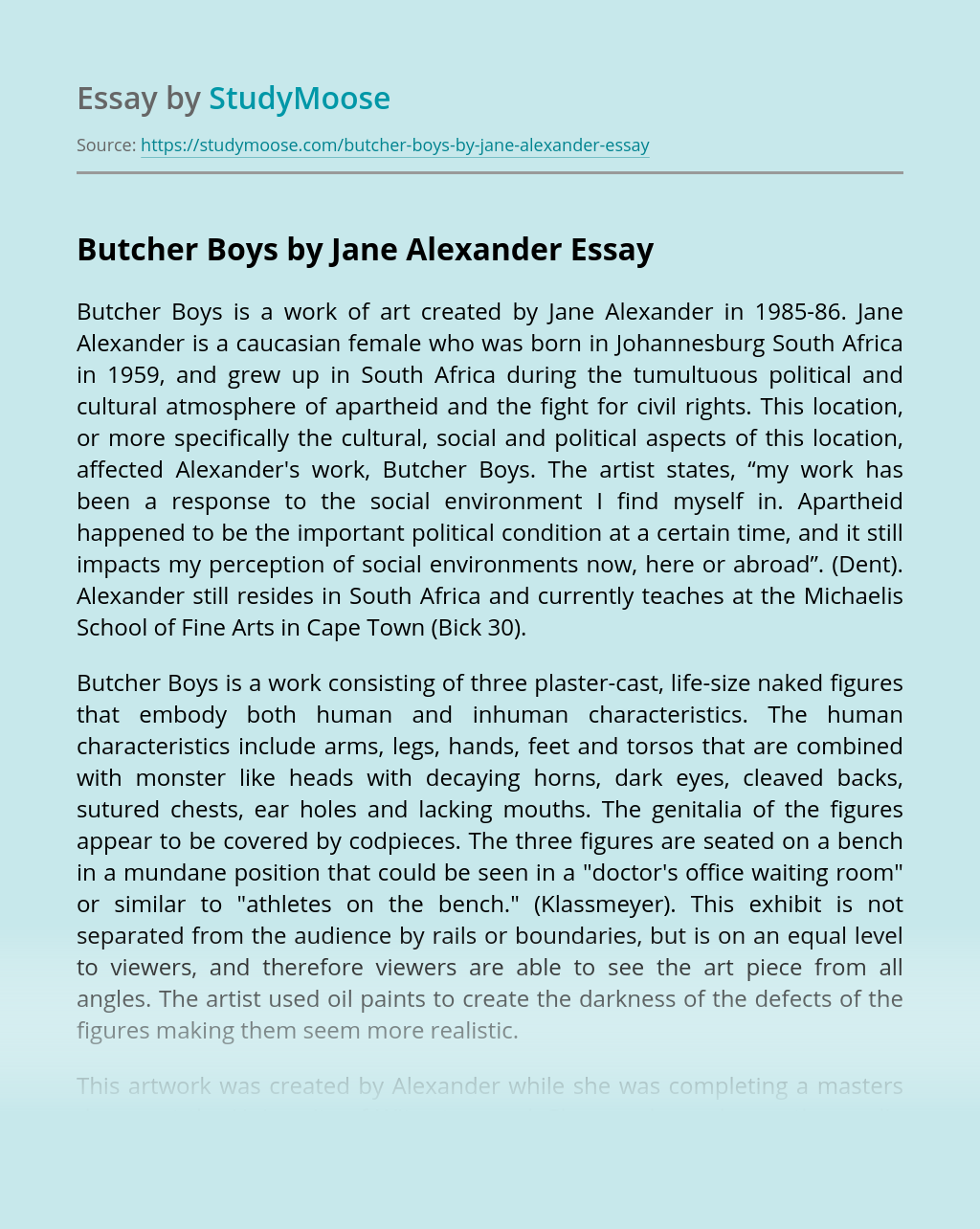