The 2004 film Alexander, directed by Oliver Stone, depicts the life of Alexander the Great. This essay will discuss the accuracy of Oliver Stone’s artistic vision in this depiction of Alexander’s life and achievements. The discussion will focus on: Alexander’s 7 year campaign, particularly its battles; his relationship with others, including his sexuality within the film; and the legacy Alexander and his armies left on the world. Historically, there are many omissions within Oliver Stone’s Alexander, however, the majority of these are accounted for through Stone’s artistic vision.

Don't use plagiarized sources. Get your custom essay on
“ Oliver Stone’s Alexander and it’s Accuracy in portraying Alexander the Great ”
Get custom paper
NEW! smart matching with writer

Many minor campaigns during the 7 year period were completely left out, and only two battles were shown throughout the movie. Within these two battles, many major components of other battles were in some way conflated so as to equate to having experienced those battles as well, since if Stone were to include every battle, not only would the film be far longer than its current form, but it would also have required a much larger budget.

This absence of battles is the major inaccuracy in Stone’s Alexander.

Whilst Stone only conveys two battles in the movie, history conveys that Alexander participated in a vast quantity of battles, pitched battles as well as sieges, throughout the 7 year march. Stone choice in depicting only these two battles of the many others was through his aim to convey the key points of Alexanders major campaigns in a condensed form as possible. Whilst the battles themselves were inaccurate, many of these inaccuracies were choices of Stone’s.

The main inaccuracy for the the Battle of Gaugemela, the first battle depicted in Alexander, is the Persian army itself.

Alexander shows them as a disorganised rabble, when, historically, the Persians would have been exceedingly well organised. Members of the Persian army would have had uniforms, rather than the variable clothing they wore, and musicians would play so that the army would march in rank. Conversely, many of the events before, during and after the battle were accurate. For example, before the battle, the night before in the tent where Alexander converses with his generals, he is urged to make a night attack and steal a victory: Alexander, if we must fight, do so with stealth. Use your numbers well; we should attack tonight when they least expect us”. Alexander refuses.

This conversation is accurate in at least it’s meaning, as is recorded by Arrian: “It is said that Parmenio came to him in his tent, and urged him to make a night attack on the Persians… but the reply which he made to him… was that it would be mean to steal a victory” (Arrian, Book 3, Section 10). The conversation is as such a recorded event, and though Stone changed dialogues, the meaning behind each is the same.

The major inaccuracy in the Battle of Hydaspes, the second battle, is that it takes place in a jungled terrain, fighting the people of India. In historical fact, the Battle of Hydaspes occurred on a open plain. Stone is said to have chosen the location of the battle to be in a forest as a contrast to the Battle of Gaugemela, which also occurred on a plain. Arrian records the battle to have taken place near the river Hydaspes, with Alexander making a secret crossing in the night, however Alexander makes no mention of the crossing, or even of the existence of the river.

Arrian also mentions that the the forces from both armies were split, but the film shows no evidence of this. A second inaccuracy was the conflict between the leader of the Indian army and Alexander. According to reports by Arrian, Alexander never confronted nor charged the king of the Indians as is shown in the film, but instead treated him with dignity and honour, eventually giving him the rule over a large territory. Nor did Bucephalus die from the major wound as shown in Alexander, but from old age and minor wounds he sustained throughout his life.

The film shows Alexander charging the king, and Buchephalus saving his master’s life at the cost of his own. This was most likely done as a method to increase the dramatic effect of the scene, but also as a method of including another major battle in Alexander’s timeline, the siege of Malli. Within the battles depicted in Alexander, Stone directed minor changes in the factuality of battle events. For example, he depicts Alexander being gravely wounded in the Battle of Hydaspes.

This grave wounding of Alexander occurred later, at the siege of Malli. This event is combined into the Battle of Hydaspes to portray more of Alexander’s history, and those knowledgeable of it could notice and appreciate this and other acknowledgements of history even though they aren’t accurate. Apart from the battles, there were other events of history or legend in Alexander’s life which are not represented. For example, the Gordian knot.

This well known legend of Alexander slicing open the untie-able knot with his sword and its linked prophecy of ruling Asia is not included. This may be because the truth is not known of the event, whether Alexander cut it, pulled apart what it was tied to and then untying it or whether it existed at all, although there is evidence that it existed. Apart from these events not included or merely conflated there are portion of Alexander in which the way Alexander is depicted historically, or not as the case may be.

To the points where it was inaccurate, Alexander is scripted throughout his speeches to encourage his men in their campaign to conquer the world. These scripts lead to him being given a purpose behind the campaign, that of a “brotherhood of man”. Historically, there is no evidence to this. Alexander was known to merely have conquered because he could, “a brilliant commander traveling an endless path of conquest” (Eugene N. Borza, Movie Commentary: Alexander, page 4).

During his early life, Alexander is shown very close to his mother, with her urging him on to succeed and whispering propaganda in his ear against his father, while Alexander is taught to be a leader through the actions of his father. Later on, he grows separate from both, however influenced by them tremendously. For example, when Philip dies, Alexander falls into a rage, even though he had fallen out recently with his father in a drink influenced conflict, and it embitters him against his mother, this bitterness continuing into the film.

Further, in developing the relationship with Hephaistion, Stone also spends a lot of time enforcing the point that Alexander is bi-sexual, through the homoerotic subtext, though this was not limited to Hephaistion but incorporated others within the film. Whilst this may have been the case in history, as in Ancient Greece sexuality was merely a matter of course, and you were either sexual or you weren’t, without vastly distinguishing between the genders, Stone pushes the limits of this concept in order to outline a known part of Alexanders life.

It is known that Alexander had at least two male physical relationships, and this may have pushed Stone into depicting the sexuality of Alexander, though in contrast to the homosexual relationships, Alexander’s relationship with his first wife Roxanne was inaccurate and over-zealous. Roxanne, his first wife, is historically known as a devoted wife and mother, rather than as the character displayed in Alexander (Eugene N. Borza, Movie Commentary: Alexander, page 3).

In all, Oliver Stone’s depiction of Alexander in his film Alexander has both accuracy and inaccuracy. The major inaccuracies was the events, or lack thereof, as Oliver Stone either chose not to or was not able to include them, whilst the main accuracies of the film were the inclusion of key points in Alexander’s life and relationships. Alexander shows some of Alexander and his armies impact on the world, and it is a well researched attempt at conveying the incredible life of Alexander the Great accurately. 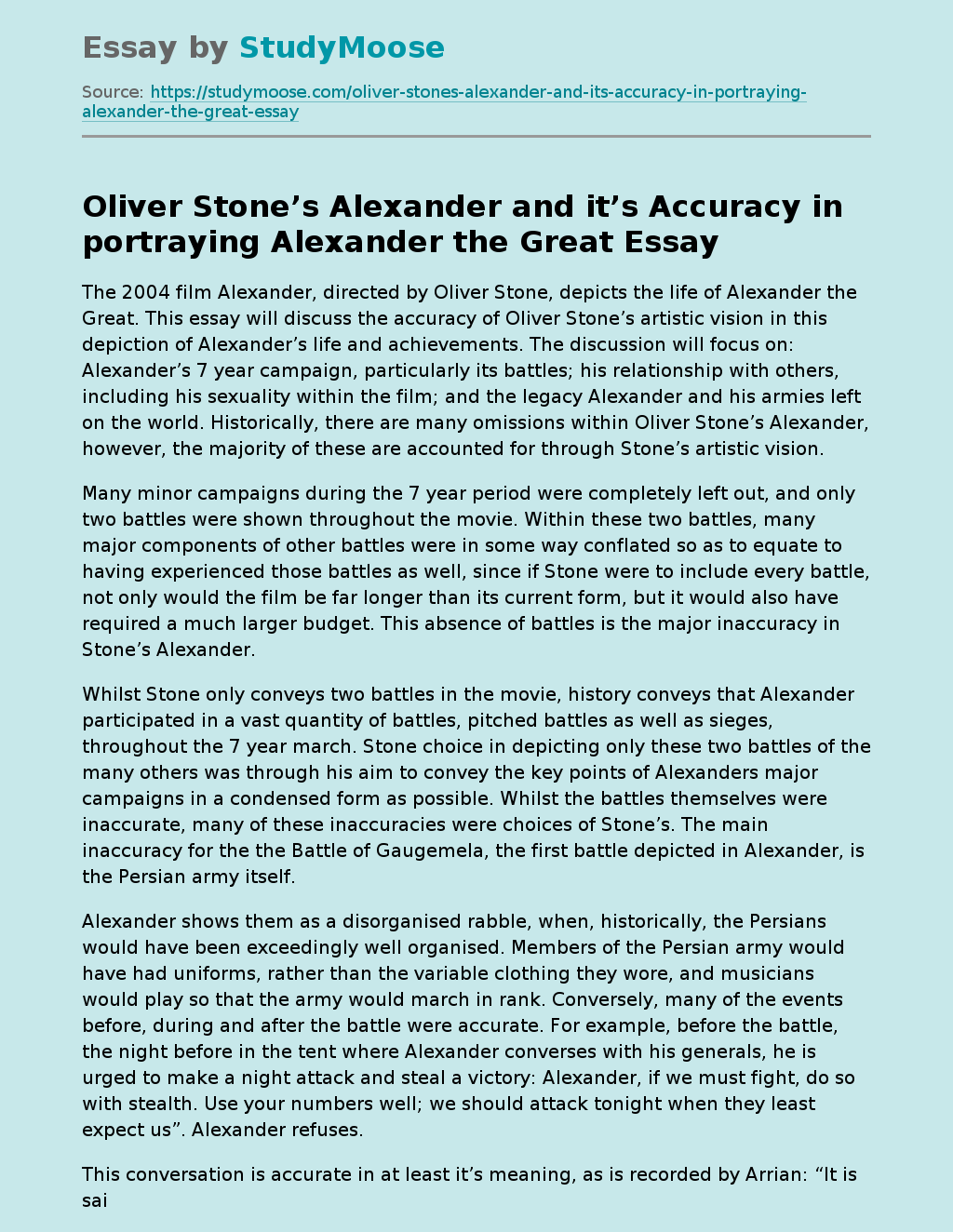