Does Alexander the Great deserve to be called 'the Great'?

The greatness of Alexander III, as he was originally, has been disputed in the past. His legend has survived for thousands of years, and his name is well-known, but just how great was he? In answering this question it is necessary to define the terms ‘deserve’ and ‘great’. For these purposes, to deserve will mean to be worthy of. Great has many meanings, and will be defined as: important; grand; distinguished; remarkable in ability or character; competent; or above what is normal, with implied admiration.

Don't use plagiarized sources. Get your custom essay on
“ Does Alexander the Great deserve to be called ‘the Great’? ”
Get custom paper
NEW! smart matching with writer

Alexander, son of Philip, the king of the Macedonians, was more than most men. His achievements were admirable, and his success brilliant.

His accomplishments were grand, momentous and distinguished, having huge impact on the history of the world. Alexander’s ability was well and truly remarkable, and his overall life was incredible. He truly fits into the criteria of a great person. The small young boy, who, although outnumbered, captured the mighty Persian Empire, was more than an average person.

He may not have been the perfect man, and some may argue he had a cruel heart, but he was surely great. Alexander the Great, as he is now, was one of the greatest men ever, and truly deserves the title ‘the great’.

Alexander was a man of achievement. He had known from his childhood that his ultimate goal was to revenge the Persians for their devastation of Greece 150 years prior. And this would drive him in his campaigns. Even before he became king, Alexander had led a minor military operation, ruled the land and established a city.

He was soon given greater command when at eighteen his father was assassinated, and he became king. His war would now begin – and would take him to be the Lord of Asia. After defeating local Persian governors, Alexander marched on through Asia Minor to meet with King Darius III, the Persian Emperor, at Issus. Alexander won decisively. But Darius and Alexander would meet again, at Gaugamela. The size of Darius’ army is unknown, but Alexander had only 50,000 men.

Again, Alexander was superior, and won a tough battle. With Darius fleeing, almost the entire Persian world was Alexander’s. Soon he became the Persian King, and led campaigns further east into today’s Pakistan. Spreading Greek culture to the ends of the known Earth, Alexander became ruler of a great empire. He had achieved a huge amount, all within no more than fourteen years. On top of this, Alexander constructed cities and trade routes and improved the economy and government. It is true that Alexander did level many towns, killing civilians including the sick, elderly, woman and children; but certainly he had made great achievements. An unknown source says “When Alexander saw the breadth of his domain, he wept for there were no more worlds to conquer.”

Other meanings of great include important and grand – and Alexander did not fail in these areas. For someone to go down in history as great, they must have left their mark. Achieving so much certainly was something special, but Alexander did more than that. With his momentous actions he changed history, and left his stamp throughout the land. He turned the tides from the east to the west in terms of the major world powers. Before him had been Persians and Babylonians, but now Greeks and Romans would be the centre of attention. Alexander spread Greek culture throughout the known world, making a major impact on many civilizations. His vast conquering pushed the boundaries of the known Earth, and his construction of cities like Alexandria shifted the light of learning.

Although many people dismiss him for not actually constructing many cities, but rather renaming them, he did have an impact on the cities, and often improved things like trade. H. Bengston suggested that: “Neither the Roman Empire…the triumphant route of Christianity…the Byzantine Empire nor the Arabian civilization would have been created without Alexander…and his cosmogony works.” Alexander must be grouped with people like Napoleon in being a pivotal individual that shaped the world. What he did was important, grand and distinguished – and great.

Alexander had remarkable ability, and so was great in many different ways. On top of doing great things, Alexander was a great leader, and a political and military genius. His goal to conquer Persia was one that he would let nothing stand in the way of. As leader of his troops, he suffered their same wounds, being one of the last great leaders to personally take the risk of death in battle. Alexander listened to every man he had, and so became very close to his men. Some argue his ability in motivating and inspiring his men was in fact the greatest ever seen, half-defeating the opposition in nerves before a battle began. He was also remarkable with military tactics, employing strategies still used today. As the Encarta Encyclopedia put it: “Alexander was one of the greatest generals of all time, noted for his brilliance as a tactician and troop leader and for the rapidity with which he could traverse great expanses…” He succeeded politically as well, earning respect from many people. Alexander’s charisma and adoption of Persian customs gave him strong loyalty needed in order to control his massive empire. However, the greatness in his work here is questionable: often he used brutal force, sometimes killing thousands of civilians, or selling them into slavery. But overall, Alexander must be seen as great man in terms of a leader and a military commander.

There is one major area of Alexander where heated debates often occur: his character and personality. Alexander is still seen almost as the devil (‘Alexander the Accursed’) in modern Iran. His acts, especially in ruthlessly killing Persians, are still remembered with hatred. The fact that his quest was centred on revenge questions his greatness. However, many scholars see him as a good man, who believed in the peaceful co-existance of all people. The Oath of Alexander the Great says: “It is my wish…that…all be happy in peace…as one people…I…see you all as equal…” Alexander’s actions seem to be quite contradictory in some circumstances. His present-day enemies see him as a man who hated all Persians, and their culture. They claim him to be an alcoholic, saying what he did was disgraceful, and is made out to be more than it was.

But he surely did have an odd character: in a drunken rage, he murdered his friend Clitus. Alexander also seems to have been lucky in some regards – sometimes not planning very well. He appears to have been a fair ruler in Persia from some accounts, but others say he hated their culture and religion, doing as much as possible to destroy it. Fraydon Aryan says “…he murdered more than one thousand Dasturs (high priests)…destroyed the fire temples, sold the inhabitants into slavery and, overall, left more than three million dead.” Although he may not have had an admirable personality, we must look at the overall Alexander.

Now it has become clear that Alexander did achieve great things, and was great in many ways, but does he deserve to be called ‘the great’? Mustn’t it take something extraordinary to be labelled this? To deserve to be called ‘the great’, someone must be extremely great. There is no measure of greatness, but clearly we can see Alexander was one of the greatest men of all time. Conquering the largest empire ever seen at that point is extremely great. Being such a good leader, an inspirer and motivator, a tactician and military genius is extremely great. Although he may not have been such a good person, Alexander was more than most other great men. All great men have enemies, and Alexander had many – but does this make him less great? Alexander must not be dismissed because of some of his less noble deeds. He is truly deserving of the name ‘the great’, having changed the course of history, stamping his name in his time, and ours.

To conclude, Alexander was an extremely great man. He made great achievements in his short life that are hard to compare to those of any other man. He ranks among those men who shaped the world, having done such important things. Alexander was also a great man in terms of leadership and military tactics. However, he had a mixed personality, and seems to be less admirable in some of his acts and intentions. Only a few men may go down in history as ‘the great’, and only few deserve to. On the whole, Alexander was truly worthy of this title. He fulfilled many criteria of a great man, and moreover was so great that he deserves to be remembered as ‘the great’. The greatness of a man is hard to assess, but despite what Alexander may have been like, his achievements and abilities are among the greatest ever seen. According to Stelios Papathemelis, “He did not merely place his stamp on his era. Rather, he has survived – he even ‘lives and reigns’.”

Does Alexander the Great deserve to be called 'the Great'?. (2021, Jun 25). Retrieved from https://studymoose.com/does-alexander-the-great-deserve-to-be-called-the-great-essay 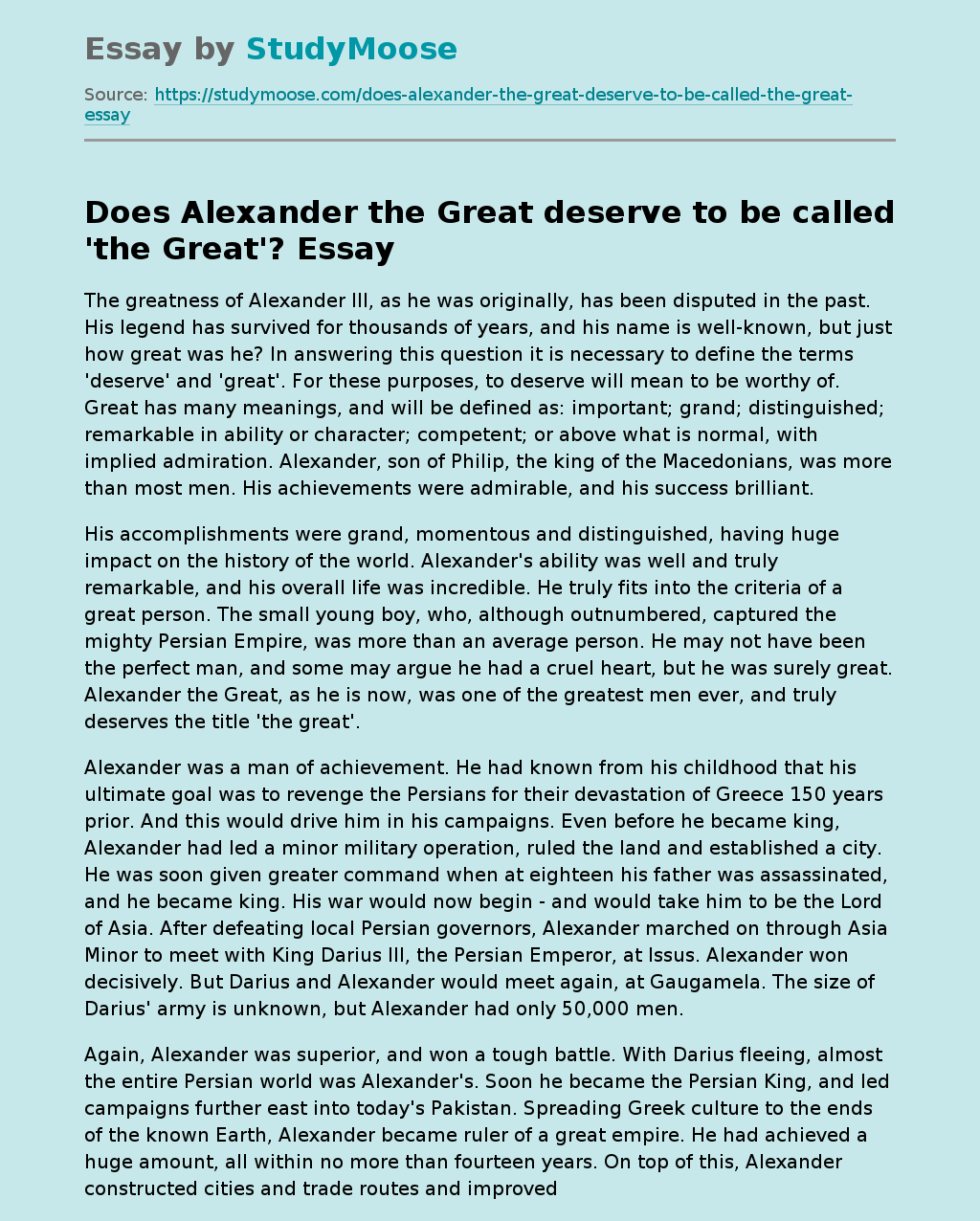