Femininity is the quality of being a female, which includes the behaviors and roles that are generally associated with women. In the 1960s and earlier, mothers usually stayed home, did the household chores such as laundry, cooking, cleaning, as well as taking care of the children. The men would go to work then return home after a long day and expect dinner ready, and then relax. Within families, in many generations, women taught their daughters to do the same to be the “good wife” society expects each woman to be.

Over the years, the norms of both men and women have changed as far as it now being acceptable for women to work, in addition to all the family and household responsibilities she has, but also men helping more around the house and playing more of the role when caring for the children. However, although women have come a long way from before, there still seems to be a lack of respect toward women.

The way artists refer to women in their songs or how company’s advertisements depict women as sex images, these are ways popular culture portrays women today. Popular culture such as music, advertisements, and television, impact a person’s idea of a woman being negative, which is not how they should be viewed by others.

From a young age, children are conformed to acting and dressing a certain way according to how their parents want them to. Due to the norms that are set for women, they are expected to act, dress, and carry themselves a certain way.

They need to act very lady like, they are expected to dress in skirts, dresses and wear colors that are usually assigned to girls such as pink and purple. These are norms that were made by society and of course, if a person does not conform to them, they are oftentimes looked down upon and very rarely ever rewarded. In “Becoming Members of Social Society: Learning the Social Meaning of Gender” written by Aaron H. Devor, he says “As we move through our lives, society demands different gender performances from us and rewards, tolerates, or punishes us differently for conformity to, or digression from, social norms” (387).

An example of society rewarding a person for digression from social norms would be if a woman shaves her head in honor of someone who is battling cancer. A woman who wears men’s clothes, has a shaved head, and is not at all feminine would be an example of a person that society would punish for digression from social norms. Women should be free to do as they please. Not only is a person’s appearance what the people in today’s society pays attention to, but the responsibilities a woman does as apposed to what a man does, such as household chores including cooking, cleaning, laundry, and raising the children. Many people look down upon women who do not take care of those responsibilities, then others get angry when women feel as though they are responsible for these chores. Many women are influenced by women to do these responsibilities because they were taught to them by past generations. The people in our society worry so much about everybody else’s flaws when each person should worry for themselves and not what others please to do.

Many advertisements have portrayed different images for women, especially depicting them as sex objects. In “Two Ways a Woman Can Get Hurt” by Jean Kilbourne, she says “Sex in advertising is pornographic because it dehumanizes and objectifies people, especially women…”(420). The advertisements company’s use display women to be used for sex when advertising for certain products. Usually advertisements for cologne use women being or looking sexy to catch the customer’s eye to want to buy the product. Women are human beings that deserve respect for being women. They are made to look sexy and getting attention for dressing and posing this way, yet they are being disrespected and looked down upon for the way they present themselves when going to the club. It does not make sense that a woman can be sexy for an advertisement, but when it comes to her everyday life she cannot express herself in the same way.

According to society, and what is accepted by them and what is not, they are allowed to be sexy when it comes to certain advertisements but when she wants to wear a dress that is too short or showing too much cleavage, she is seen as a hoe, which is oftentimes the case. There are certain values a woman is expected to have, such as they way she carries herself, appearance, and behavior. For example, in movies and shows there may be a scene in which there is a man getting drunk, acting crazy, and hooking up with different girls and the man gets respect for that and is being praised. Yet, when it is switched around to a woman doing the same thing, she is seen as a ho or a slut. Society already has what is acceptable for each gender, but popular culture emphasizes and keeps people’s ideas at the same place.

Music impacts the idea many people have of women due to the way certain artists express their ideas of how a woman is. Music artists such as Tupac has written songs honoring women. He has a song called “Keep Ya Head Up,” that inspires women to keep living life with high hopes and dreams regardless of how men treat them, throughout the song he says that things will get easier. He wrote another song called “Dear Mama” which talks about the struggles he and his family went through growing up. His mother was on drugs, and his mother was raising Tupac and his siblings on her own and even though they hung around with the thugs and the wrong crowd, his mother never left their side. The song “Dear Mama” is basically a thank you to his mother for all that she did for him and for never losing hope or leaving his side when times got tough. While Tupac was an artist who believed women deserved the utmost respect, there are other artists who refer to women as being no better for anything other than sex. For example, the rapper YG, has a song called “Bitches Ain’t Shit” which refers to women being “bitches,” and nothing but “hoes and tricks.” This song is about a man who has sex with many different women and talks about the different way each woman is, or what it is her body has to offer such as “ass and titties.” The difference between these two artists is the perspective in which they see women. Tupac is very respectful toward women, while YG sees women for sex only.

Even though the image of women is seen a negative way to many men and women due to the advertisements and music, they are expected to be seen as role models. Majority of women are mothers and if are not yet they may soon be and are supposed to be someone who their children look up to. Women are people who are oftentimes to have the motherly characteristic who care for others as well as emotional. They are not supposed to be seen partying and getting drunk or being around a lot of guys, nor are they supposed to dress in a way that shows a lot of skin or exposing to much cleavage. Women are expected to act and dress a certain way because they are the people who are supposed to care for others. They are usually the ones who take care of children, do household chores and make sure their husbands and children are well taken care of and if they are not, they are seen as a bad wife and mother. Some may say that women should not feel obligated to do the standard things women do such as cooking and cleaning, but they are respected for those things by their husband and children because if she were not the one to do it for them, they would have to do it themselves.

Finally, although women should be responsible for their behavior and how they present themselves, they should be free to do as they please, just how it is acceptable for men to live their life how they want to without worrying if they will be judged. Popular culture such as music, media, and television shows provides people with an idea of women that can be either positive or negative all depending on what it is they are doing. When a woman looks sexy in advertisements they are seen as hot and all a man wants from them is sex, but then there are men who call women hoes when they go to the club dancing around with there guys and getting drunk. Women should be treated with respect, of course they have to earn it but a book should not always be judged by its cover. Mothers especially deserve the utmost respect because they are the ones who carry their child in their womb for nine months, then go on to raise them and teach them about life. Yet the children they are raising and giving their all to make their lives better than theirs, they are the ones being disrespectful when it should not be that way. 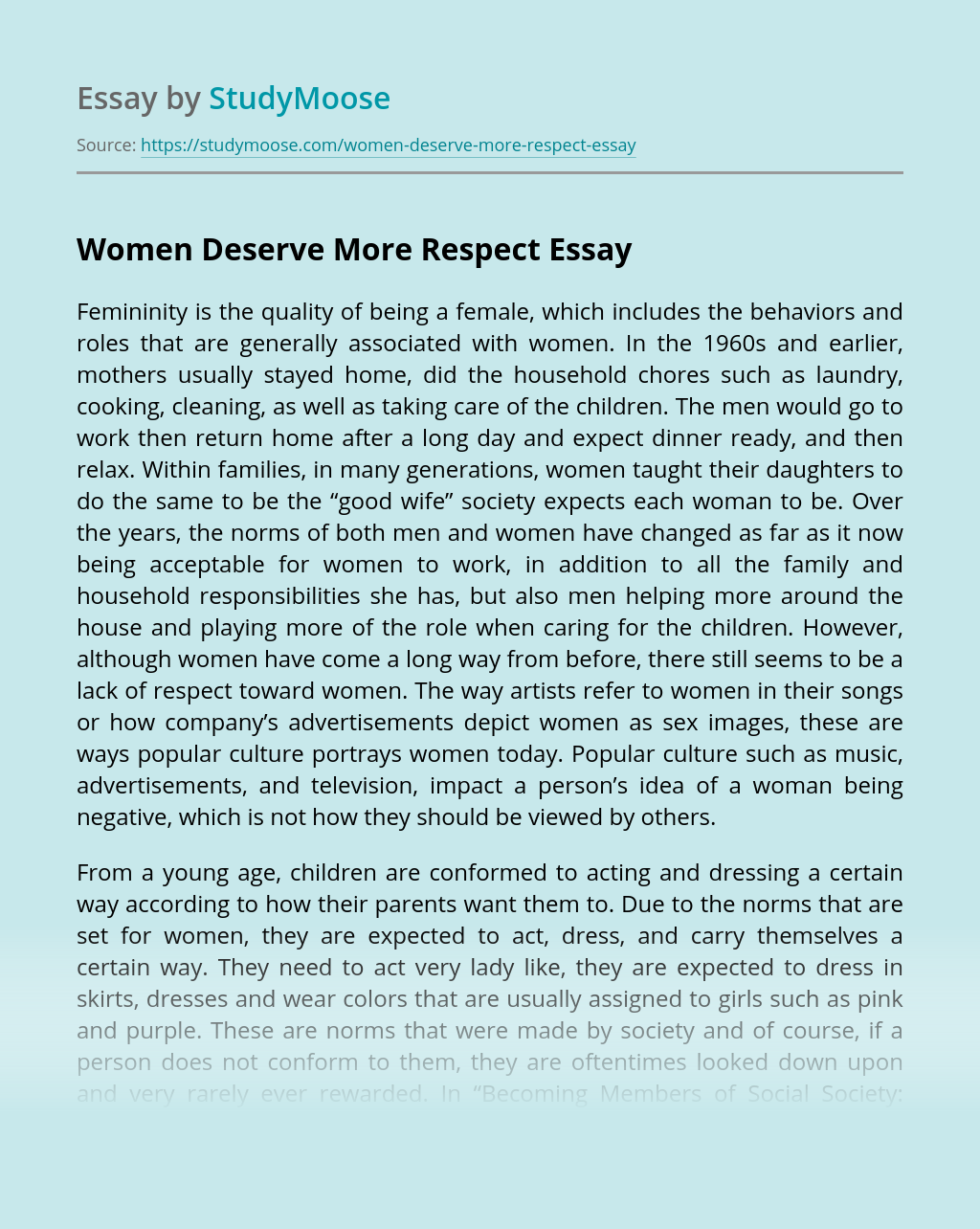