Was Alexander the Great Really Great

2,000,000 square miles. It would take the average man 500,000 hours to walk this distance. This translates to 20,833 days, which is equal to 57 years. In a mere 12 years, a man by the name of Alexander III of Macedon, conquered such a vast expanse of land, by the time he was 32 Alexander controlled an empire larger than any the world had ever seen. Today, around the world this man is known as “Alexander the Great”. But why is Alexander considered “great”? At first the answer seems pretty straightforward: at the age of 20 he inherited the throne of Macedon, he invaded Persia, and in less than ten years he had conquered Egypt, Iran, Persia, and parts of India.

Don't use plagiarized sources. Get your custom essay on
“ Was Alexander the Great Really Great ”
Get custom paper
NEW! smart matching with writer

Alexander is responsible for spreading Greek culture across the known world, he founded various cities, and some consider him a “philosophical idealist” with his policies of incorporating various races into his military and government. He was never defeated in battle and by the age of 32 controlled an empire that spanned from Greece to India.

Certainly on the basis of his military success, especially in the eyes of the many who count success as the number of dead bodies removed from a battle scene, he lived up to his title. Earning the title of “The great” is certainly no small feat, but should a man be awarded this trophy on the basis of military achievements alone? Should a man, who is responsible for the deaths of thousands, who had serious alcoholic and rage issues, be considered great?

If Alexander were a military commander only, then there would be no question, he would deserve the title, and probably many of the legends associated with him.

But this is not the case, Alexander was also a king, had personal relationships, and was a member of the human race. He must also be held morally accountable and examined for greatness in these other roles he held in his life. On all three accounts (king, relationships, and man) Alexander’s positive influence was more than lacking, and for this reason should not be considered great.

The first area in which Alexander was far less than great, was Alexander’s role as king of Macedon. Alexander required thousands of troops throughout his military campaign, in document A it states that when Alexander left Macedon he brought 40,000 troops with him. This in and of itself is not necessarily a bad thing, in order to conquer Persia, Alexander needed as many troops as he could get. From a military perspective, this was ideal. However, Alexander was more than simply a military leader, he was the kingof Macedon.

Document A shows that Alexander left Macedon in about 334 BCE, this means that Alexander only stayed in Macedon as the king for a single year. When Alexander left Macedon, and took his 40,000 troops with him to Persia, Macedon was left with a weakened defense. When Alexander left for Persia he left a man named Antipater in Macedon to ensure it’s protection. Although successful in the end, it was more a matter of luck than good kingship by the way of Alexander. The military support and reinforcement required by Alexander constantly left Macedonia depleted in men. An uprising in Thrace almost destroyed what was left of the Antipater army, and during the war of Agis III, it was only the fact that Leonnatus returned with reinforcements that saved Antipater.

Alexander’s military conquests and endless search for power in Persia left his homeland and theoretically his largest responsibility with less than adequate defenses. Alexander, although possessing a vast empire, could never unite it. He was often deemed a paranoid megalomaniac, who held his empire together with frequent and unnecessary assassinations. Truly Alexander was feared and not loved, anyone who crossed him died. Cleitus, one of Alexander’s friends and generals, misspoke about Alexander’s father, and in a drunken haze Alexander stabbed him with a spear, and killed him. Alexander’s men and his friends were afraid of him, which is why, as it states in document E, Alexander’s “great” empire only lasted 10 years after his death. As king, one should not only maintain their kingdom, but name an heir to rule it afterwards, Alexander did not. This would be understandable had he died in battle (which could have happened numerous times before), however Alexander died in bed, most likely of typhoid fever or malaria, with ten days to name an heir. Alexander did not fulfill his duties as king, he abandoned Macedon, and left it close to defenseless, never named an heir, and ruled with fear and power, never truly uniting his kingdom, which inevitably led to its collapse.

Alexander was a person, although he claimed himself to be a god, and he had close relationships with other people. However, in many of Alexander’s relationships, he was anything but great. Alexander’s father, Philip, had many wives and sons, Alexander’s mother was named Olympias. There is some evidence to show that when Olympias became worried Alexander (who was even rumored to be illegitimate) would not become king, she plotted withAlexander to kill Philip, and paid Philip’s body guard to do it. Ironically enough the murderer himself, is killed by Alexander’s henchmen, almost immediately after the murder.

Later in life, Alexander killed his best friend Cleitus, by stabbing him with a spear. Paramenio was a general who had served under Philip as well as Alexander, but when a conspiracy arose that he planned to assassinate Alexander, Alexander had them both put to death. Document B references Porus, an Indian prince. Alexander allowed this prince to continue ruling under Alexander’s name after he was defeated. However, this was the last battle fought by Alexander, as his men refused to follow him further without reason. It is for this reason that Alexander allowed Porus to continue his rule. On many accounts, especially towards the end of his life, Alexander was increasingly paranoid. He ordered assassins to kill his close allies and friends based on suspicions, and he was rarely trusted and often feared. Alexander’s personal relationships failed in nearly every circumstance, and it usually ended with the murder of one of his friends, those who were supposed to be close to him. Poor ability to maintain positive personal relationships, provides yet another reason why Alexander was not truly great.

Alexander, through the lense of morality, was much less than great, in fact he was quite the opposite. Although Alexander claimed to be a god, he was in fact a man, both mortal (dying at the age of 32) and human, his parents being Philip and Olympias. Document C references Alexander’s campaign against Tyre. It shows that once he broke in, he destroyed the city- killing thousands. Those he supposedly showed mercy to, were sold into slavery, and 2,000 were crucified. This unnecessary massacre of humans was simply cruel. Another instance in which Alexander was amoral, was when his men refused to march forward into India. Instead of returning home over sea, or along the coast, he forced his men to march for miles through the desert, the same desert referenced in Document D.

During this forced march thousands of Alexander’s men died. Additionally, although the legend in document D where Alexander threw down the helmet of water, could be seen as inspirational, it could also be seen as disrespectful. Allowing the people who found the water to drink it, and then bringing the remainder of his army there to at least drink a little would have been safer, and more effective than wasting water.
Alexander’s lack of morality is noted again in Document D, where a man swims after Alexander’s head band, and Alexander kills him for doing so. Among other cruel things, Alexander almost killed Aristotle, murdered many of his close friends, and sold thousands of men and women into slavery. In spite of this, his empire still collapsed a mere 10 years after his death (Document E).

Alexander the great was known by another name, Alexander the Annihilator, anybody who stood in his path he destroyed mercilessly, and he made an example of them. In the east, Alexander is a villain, his name is “Iscandur- the killer” & “Iscandur-the destroyer of cities”. He slaughtered his way across three continents in a mere decade, Alexander was clearly a tyrant in a hurry, and one who worked outside the normal rules of human morality.

Alexander “the great” – although a military genius, was also a king, and a mortal man who had relationships. Although Alexander succeeded on the battlefield, he failed outside of it. Psychiatrist David Mallot diagnosed Alexander, not as great, but as a psychopathic goal driven killer, with a narcissistic personality disorder. Alexander the great was a power hungry megalomaniac, whose sole purpose was to conquer as much land as he could with utter disregard for human life. Alexander the great, however popular of a title, is misleading, Alexander was a ruthless tyrant, and clearly doesn’t deserve to be remembered as “great”.

Was Alexander the Great Really Great. (2016, Apr 12). Retrieved from https://studymoose.com/was-alexander-the-great-really-great-essay 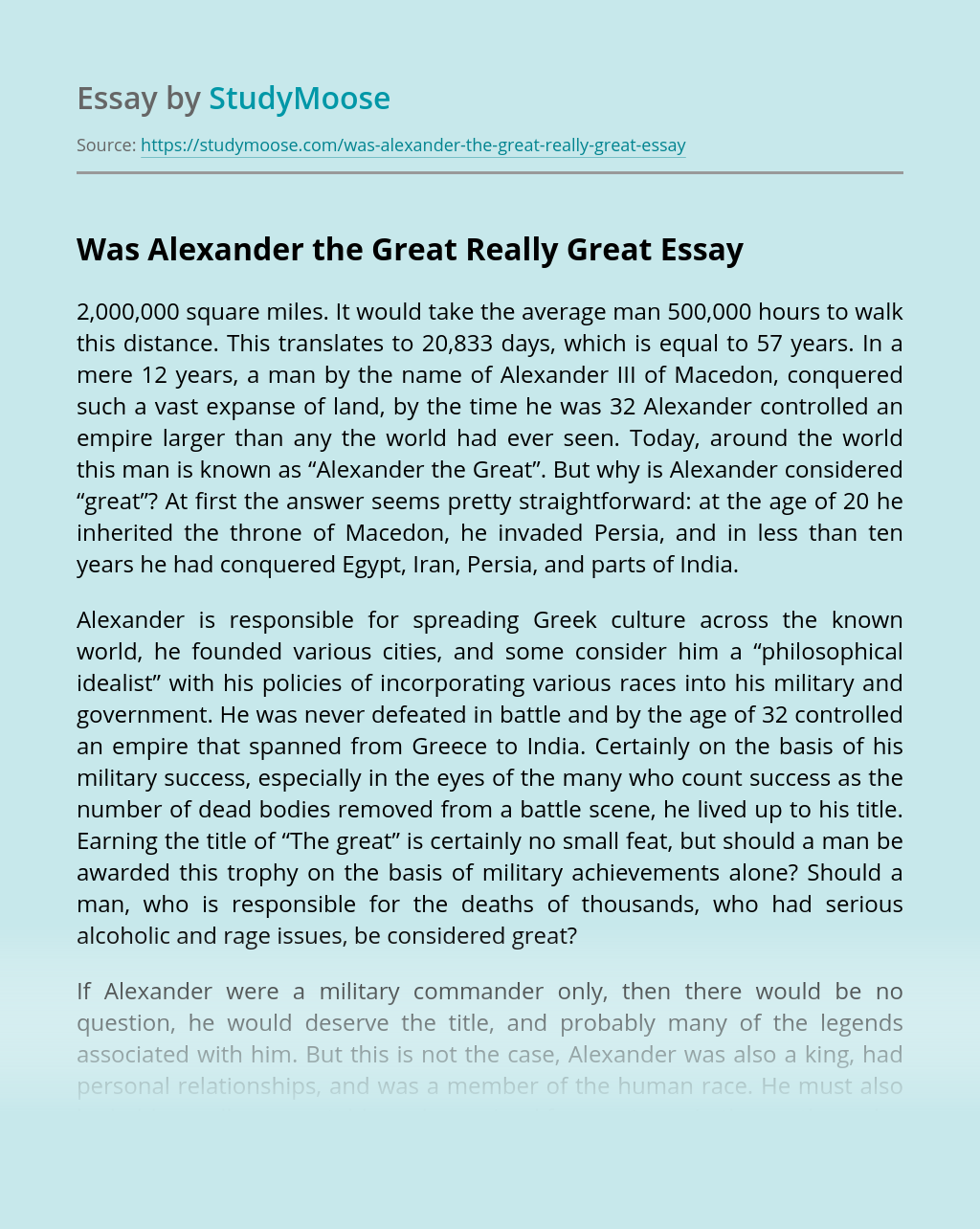