The Relationship Between Alexander and the Great General Hephaestion

Alexander III of Macedon, or better known as Alexander the Great was king of Macedon, a state in northern Ancient Greece. He was born in Pella in 356 B. C. and was tutored by Aristotle until the age of 16. By the age of 30, he had created one of the largest empires of the ancient world, stretching from the Ionian Sea to the Himalayas. He was undefeated in battle and is considered one of history’s most successful commanders. Alexander was an outgoing charismatic man, who had many friends, but his dearest and closest friend and confidant was Hephaestion.

Don't use plagiarized sources. Get your custom essay on
“ The Relationship Between Alexander and the Great General Hephaestion ”
Get custom paper
NEW! smart matching with writer

Hephaestion, son of Amyntor, was a Macedonian nobleman and a general in the army of Alexander the Great. He was born in Macedonia in 356 B. C. He was a member of Alexander the Great’s personal bodyguard, which then he went on to command the Companion cavalry, and was entrusted with many other tasks through Alexander’s ten-year campaign in Asia. Apart from being a soldier, engineer and diplomat, he corresponded with the philosophers Aristotle and Xenocrates, and supported Alexander in his attempts to integrate Greeks and Persians.

Their relationship lasted through Alexander’s becoming of king, through the hardships of campaigning and the flatteries of court life, and their marriages. In all that Alexander undertook, Hephaestion was at his side making their friendship a working partnership. They worked well together making Alexander trust him and rely on him. When Alexander had to divide his forces he trusted Hephaestion with half of his men knowing that in him he had a man of unquestionable loyalty, who understood and sympathised with his aims, and above all, who got the job done.

Hammond sums up their public relationship well: “It is not surprising that Alexander was as closely attached to Hephaestion as Achilles was to Patroclus”, and “At the time of his death Hephaestion held the highest single command, that of the Companion Cavalry; and had been repeatedly second in command to Alexander in the hierarchy of the Asian court, holding the title of Chiliarch, which had been held by Nabarzans under Darius. Thus Alexander honoured Hephaestion both as the closest of his friends and the most distinguished of his Field Marshals. It has been said that as well as being close friends Alexander and Hephaestion were also lovers. It cannot be proved that they were lovers as none of the ancient sources states this in so many words. However, Arrian describes the occasion when Alexander and Hephaestion publicly identified themselves with Achilles and Patroclus, who were acknowledged, by Plato and Aeschylus among others, to have been lovers. It happened at the begging of the campaign in Asia when Alexander led a contingent of the army to visit Troy.

He laid a wreath on the tomb of Achilles, and Hephaestion laid a wreath on the tomb of Patroclus, and they ran a race, naked, to honour their dead heroes. Robin Lane Fox, writing in 1973, says: “It was a remarkable tribute, uniquely paid, and it is also Hephaestion’s first mention in Alexander’s career. Already the two were intimate, Patroclus and Achilles even to those around them; the comparison would remain to the end of their days and is proof of their life as lovers, for by Alexander’s time, Achilles and Patroclus were agreed to have enjoyed the relationship which Homer had never directly mentioned.

In conclusion Alexander and Hephaestion’s relationship was extremely close. They may or may not have been lovers but the friendship they shared was one of a kind. Their tutor, Aristotle, described such a friendship as “… one soul abiding in two bodies”. Paul Cartledge describes their closeness when he says: “Alexander seems actually to have referred to Hephaestion as his alter ego. ” They truly were soul mates and had one of the strongest relationships in history.

The Relationship Between Alexander and the Great General Hephaestion. (2020, Oct 29). Retrieved from https://studymoose.com/the-relationship-between-alexander-and-the-great-general-hephaestion-essay 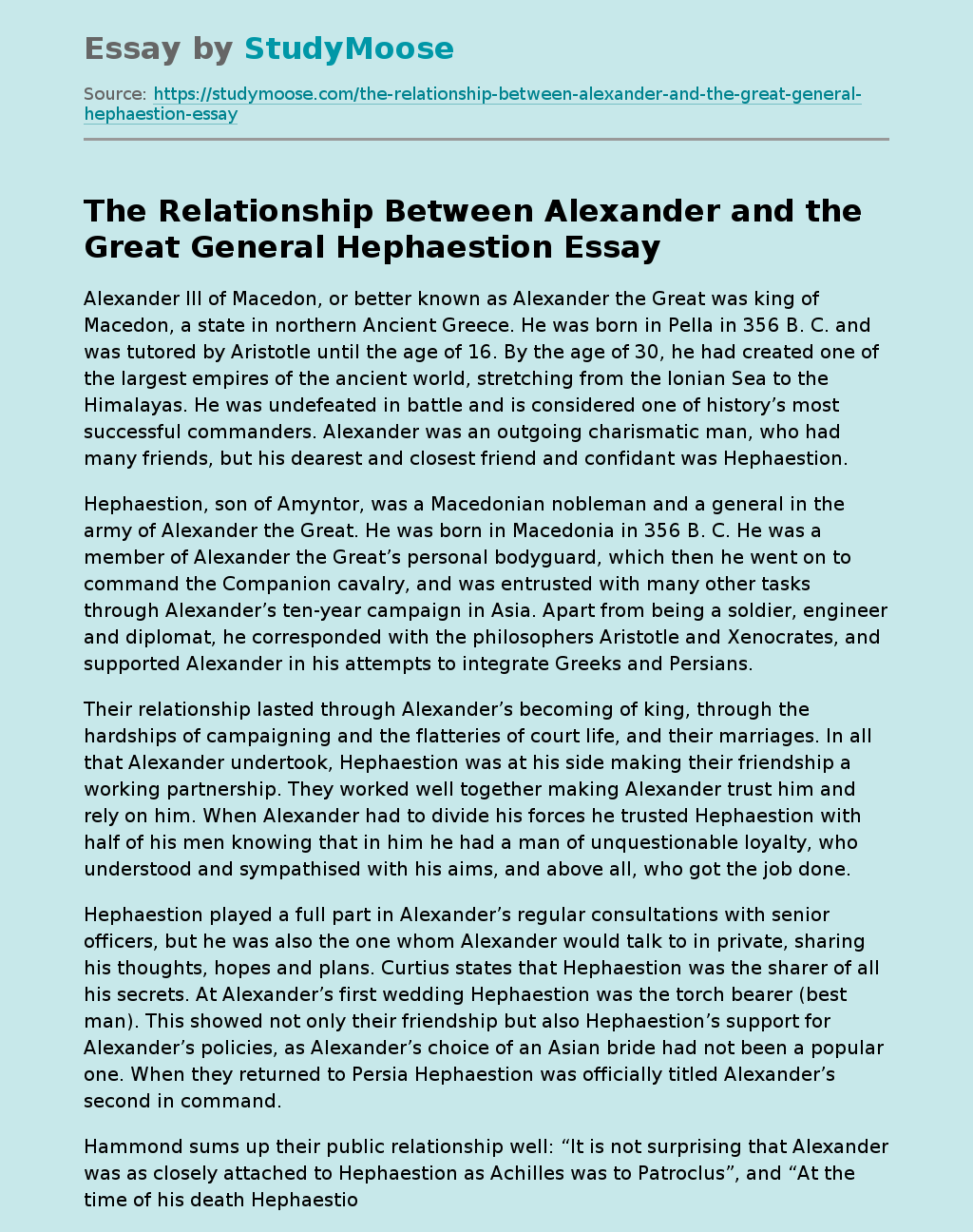