The Great Gatsby is a classic tale that has been interpreted very differently throughout time. One prominent source of constant debate lies in the main character, Jay Gatsby. In the novel’s title, Gatsby is misleadingly referred to as being “great”. However, the events that transpire within the novel paint a very different picture of this man. Despite the title of his story, Jay Gatsby is dishonorable, immoral, a phony, and is, in fact, very far from greatness. To elaborate, when Gatsby meets Daisy, he loses sight of his true ambition.

Don't use plagiarized sources. Get your custom essay on
“ The Great Gatsby – Really Great ”
Get custom paper
NEW! smart matching with writer

Gatsby ends up transforming himself in order to please Daisy, the love of his life.

His actions could be seen as admirable if it were not for the fact that Daisy was a ridiculously shallow and ignorant woman. Originally, Gatsby was a man with high standards for himself and his future. Unfortunately, being a person who was most familiar with the lifestyle of the working class, he was easily lost in the glamour of Daisy’s rich, extraordinary life.

When they develop a relationship, he finds an opportunity to take part in the exclusive high society of America and takes advantage of it: “eventually he took Daisy one still October night, took her because he had no real right to touch her hand” (Fitzgerald 156).

Daisy was in love with Gatsby partially because he allowed her to believe that, financially, he was her equal. Under false pretenses, Gatsby takes Daisy’s virginity simply because he can. In an examination of The Great Gatsby, Tony McAdams pushes the novel as an attempt by its author, F.

Scott Fitzgerald, to suggest “that the American Dream lies in the limitless possibilities in being human while warning of the risks in losing sight of those possibilities in the glare of wealth and its accoutrements” (McAdams 117).

Gatsby is the prime example of a person disregarding whatever morals he might have had, in order to pursue Daisy, his own personal American Dream. Consequently, his actions were reprehensible, not great. Gatsby also showed himself to be a generally dishonest person. Daisy was married to a man named Tom. By trying to win her affections Gatsby is, in turn, adamantly trying to get Daisy to cheat on her husband. On top of this, when Gatsby’s persistent chase for Daisy is brought to his attention, Tom looks into Gatsby’s past, and “reveal[s] him [Gatsby] as a liar and a riminal” (Stocks 2).

Tom investigates Gatsby and announces that he is connected to various under-the-table dealings such as bootlegging, and betting. It later becomes clear that there is some substance to his accusations. In the end, Gatsby was shot and killed as an indirect result of his deceptiveness. Gatsby lead an immoral, deceitful life, most likely believing that the end would justify the means. Ironically, his death served to prove a very different theory; that what a person reaps is what he sows. 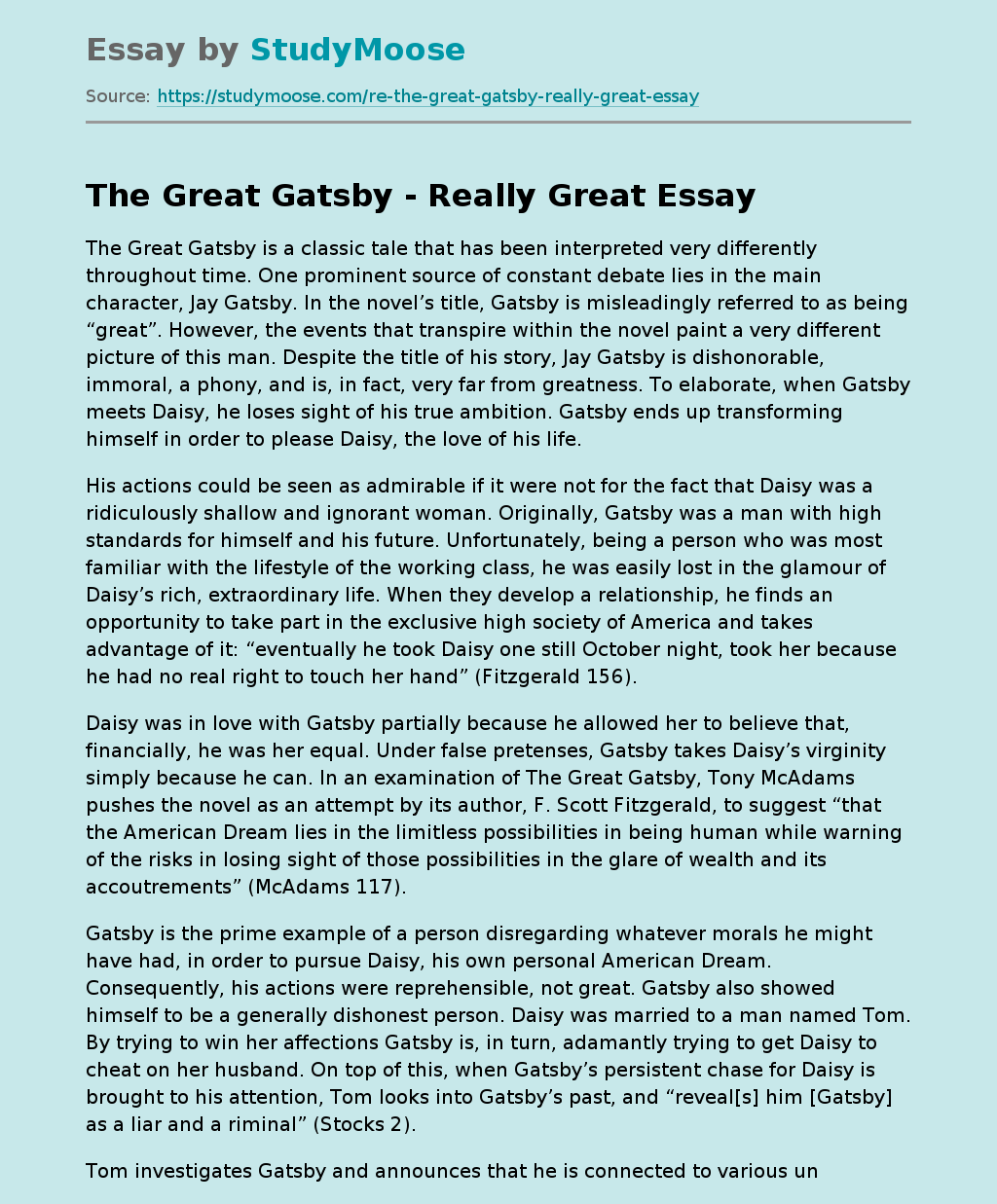