The Great Gatsby and Great Expectations: A Comparison

Since the beginning of time, society has been separated into classes; the rulers and the ruled, the rich and the poor, the nobility and the common folk. One can find examples of social caste systems in any time period. Over time, social standards have changed, but one thing has not. Those who possess wealth are thought to also possess happiness. From the outside looking in, the common man always believes that the wealthy live happier lives.

Don't use plagiarized sources. Get your custom essay on
“ The Great Gatsby and Great Expectations: A Comparison ”
Get custom paper
NEW! smart matching with writer

Charles Dickens’ Great Expectations and F. Scot Fitzgerald’s The Great Gatsby, both show that in order to be truly happy, one must reject superficial things, such as one’s position in the caste system of society, and pursue one’s true desires. When given the choice between upper class and common, a well-rounded individual will choose a common life. At the start of the novel, the protagonist Nick Carraway finds himself lusting for the glamorous life in New York City, partially out of boredom and partially because he does not have a passion in life.

Fitzgerald portrays Carraway’s lostness when we writes, “Everybody I knew was in the bond business, so I supposed it could support one more single man” (Fitzgerald 3).

With this sentence, the audience feels that Carraway does not feel passionate about the “bond business,” rather he believes that it is an opportunity that his family approves of and something reasonably pleasing. Carraway wishes to adventure out to the East Coast in order to become his own person and rise in social class.

He wishes to be a glamorous New Yorker as opposed to a boring Middle-Western man. Over the summer, Carraway lives in a modest, decent-sized house, sandwiched between two monstrous mansions. At the end of the While in New York, Nick enjoys the many luxuries of the upper class life by befriending Jay Gatsby and many other wealthy and famous characters. Nick meets Jordan Baker, a famous athlete, and takes her on dates over the summer, initially, Nick “was flattered to go places with her, because she was a golf champion, and everyone knew her name” (Fitzgerald 57). Carraway enjoys her company for superficial reasons: her fame, her beauty, her position in society.

But as Carraway spends more time with Baker, he learns that she is dishonest and afraid on the inside. Fitzgerald shows Baker’s unhappiness when he writes, ““I suppose she had begun dealing in subterfuges when she was very young in order to keep that cool, insolent smile turned to the world and yet satisfy the demands of her hard, jaunty body” (Fitzgerald 58). Baker had to learn coping mechanisms when she was “very young” in order to achieve happiness in upper class society. Baker had to learn to be fake, to ignore her inner desires and tap into her superficial wants.

Carraway takes note of this, and notices this similarity in many members of upper class society. Carraway fins that often the wealthy and famous members of society are either vastly unhappy, or learn to twist their perspectives to be happy. Over the course of the summer, Carraway realizes that many upper-class people possess unappealing qualities similar to Bakers’. At the end of the novel, when given a chance to continue his career as a New York bondsman or return home, Carraway chooses to return to the Middle-Western United States, to his home. He realizes that upper class society is composed of unhappy and superficial people. When given the choice, Carraway chooses to reject social class and pursue what makes him happy.

When an individual is so concerned with social standing that he abandons the things that he loves, he will only find unhappiness. Charles Dickens portrays the lack of happiness that comes with higher social position through his character Pip in the 19th century novel Great Expectations. Pip falls for Estella in his childhood and believes that if he earns a title of nobility, Estella will reciprocate his love. After Pip hatches his plan, he begins to hate his “common” life, a thing that he once loved: “Finally, I remember that when I got into my little bed-room, I was truly retched, and had a strong conviction on me that I should never like Joe’s trade. I had liked it once, but once was not now” (Dickens 82). Pip believes that his happiness will come from becoming a gentleman, and in order to become a gentleman, Pip must fit the standards of upper class. He must hate all lower class occupations, such as blacksmithery, and abandon his once beloved home.

After achieving his title of a gentleman, Pip meets Estella’s rejection and goes on to lead a life of adventure. When Pip returns home, he finds that he had missed out on much love from his family, specifically from Joe: “He would sit and talk to me in the old confidence, and with the old simplicity, and in the old unassertive protecting way, so that I would half believe that all my life since the days of the old kitchen was one if the mental troubles of the fever that was gone” (Dickens 366). Pip finds true happiness in the end of the novel when he rejects social standards and pursues what makes him happy, love. Only when he rejects social standards does he finally obtain Estella’s love.

These two novels show that often, people do not find true happiness in superficial things such as position in society. In order to be happy, an individual must let go of social obligations, and relentlessly follow his or her dreams.

The Great Gatsby and Great Expectations: A Comparison. (2016, Apr 24). Retrieved from https://studymoose.com/the-great-gatsby-and-great-expectations-a-comparison-essay 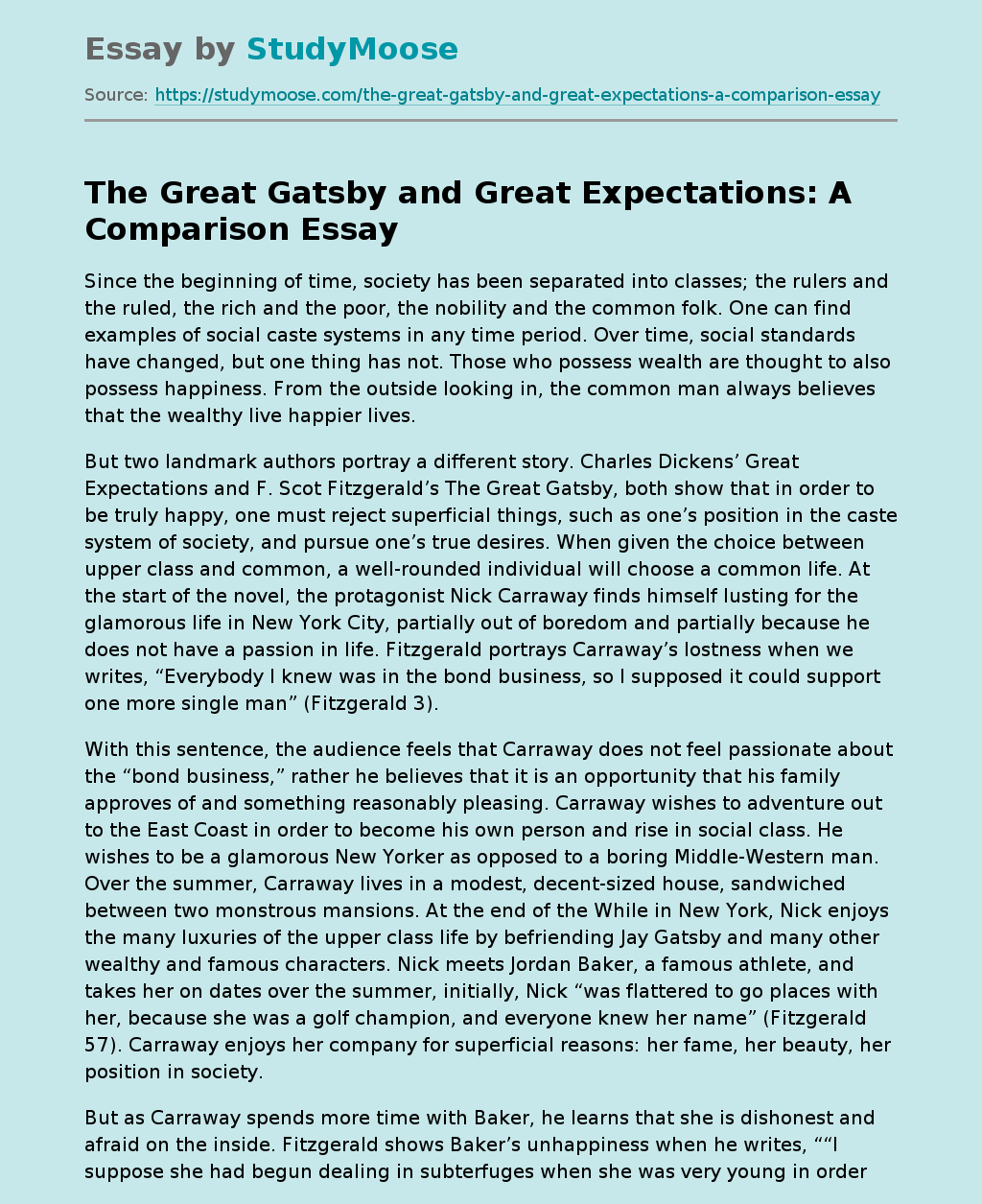