Often called the first Modernist poem, “The Love Song of J. Alfred Prufrock” was published in the prestigious American journal Poetry in June 1915. About the Poem: The poem centers on the feelings and thoughts of the eponymous speaker (the somewhat neurotic Prufrock) as he walks through the streets of London route to meet a woman for tea. He is considering a question (perhaps, broadly, the meaning of life, or, more narrowly, a proposal of marriage). Far more than just the “love song” of a romantic, agonized young man, the poem explores the Modernist alienation of the individual in society.

Don't use plagiarized sources. Get your custom essay on
“ Representation of Modern Man’s Pursuit Of Happiness ”
Get custom paper
NEW! smart matching with writer

Born into a prosperous Midwestern family, Eliot attended Harvard and then went on to study at Oxford. Although born an American, Eliot married an Englishwoman, gave up his American citizenship, and lived most of his life in London. Eliot made his living as a teacher, a banker, and an influential literary critic. He popularized the modernist style of thinking and writing.

In fiction, modernism was represented by the stark realism of such writers as Ernest Hemingway, but in poetry this new sensibility was quite different. The Imagists, including Eliot’s close friend and fellow poet, Ezra Pound, believed in the motto, “No ideas but in things,” in other words, the image is most important, the meaning secondary.

Modernists embraced free verse (no regular rhyme scheme or meter) and freedom of thought (often their writing questioned accepted ideas and social norms). This anti-traditional and anti-romantic trend began before World War I; however the unprecedented loss of humanity during the war accelerated the popularization of modernism.

The war caused many people to reexamine their previous beliefs in religion and the innate goods of humankind, and one radical branch of modernism, known as Dada, claimed that the only legitimate emotion left was disgust. “The Love Song of J. Alfred Prufrock,”

The entire poem, “The Love Song of J. Alfred Prufrock” is an interior monologue based on the traditional dramatic monologue, a solo speech that often puts into words the speaker’s inner turmoil, as in Hamlet’s famous “To be or not to be” soliloquy. Prufrock often alludes to Shakespeare’s Hamlet, but admits, “I am not Prince Hamlet.” He has no such grand illusions. His thoughts and feelings tend to be humble and full of self-doubt. He worries not about “outrageous fortune,” as Hamlet does, but about growing old and being rejected by a woman. Critically Analyzing the poem:

Contrary to what the title implies, The Love Song of J. Alfred Prufrock, by T.S. Eliot, is anything but a love song. It is instead quite the opposite. Although the poem is open to several interpretations, after careful reading of the poem, the several underlying themes can be expressed by one central idea. In the poem, the narrator, J. Alfred Prufrock, portrays his disappointment with the society he lives in. By interpreting aspects of imagery, speaker and intended audience, one can easily assess Prufrock’s views of life. His interpretation of everyday life can be described as a vacant, bleak, and repetitive. Early on in the poem, Eliot creates a scene that does not seem very inviting. Prufrock describes his surrounding on an evening out with phrases that insinuate melancholy and depression. In line 6, Prufrock describes the night as “restless” and says that the streets are “tedious arguments of insidious intent”. From this the reader can infer a certain discontentment that Prufrock has with his surroundings.

He refers to his, and his companions’, destination as “one-night cheap hotels and sawdust restaurants with oyster-shells”. Even though these descriptions leave the reader only approximately 10 lines into the poem, we already have a feeling of restlessness and dissatisfaction from Prufrock about his life. As the poem continues, the reader is bombarded with even more imagery that conveys Prufrock’s discontentment with his surroundings. Prufrock talks of the “yellow fog” that “rubs its back upon the window-panes” and the “yellow smoke that rubs its muzzle on the window panes”. He also mentions the “soot that falls from chimneys”. Later on in the poem, Prufrock refers to smoke again while describing the streets he is walking on. All this imagery leaves the reader feeling that the place Prufrock is at is dark and hazy and not at all welcoming. Among the feelings that Prufrock expresses in this poem, no feeling comes across more clearly than his feeling of restlessness and wasted time.

We get the feeling that Prufrock, who is aging, would do things differently if given another chance. In lines 49-54, Prufrock asserts his overall boredom with life. He says he has “known them all already, known them all-have known the evenings, mornings, afternoons”. From this we can infer that Prufrock seems to feel as if his life is over and he has no more to offer. He makes statements similar to this throughout the poem. He proclaims to have known “the eyes that fix you in a formulated phrase” and the “arms that are bracleted and white and bare”. We get more of a sense of Prufrock’s disillusionment of life with his many references to time. In lines 24-34, he claims there is time to “meet faces”, “murder and create”, have a “hundred indecisions” and a “hundred visions and revisions”.

It is not as though Prufrock is doing this in a hopeful manner, though. Instead we get the impression that he is reflecting on time as if it is plentiful only if you take advantage of it and perhaps he feels he did not Another aspect of this poem that is important is the interpretation of it is the speaker and the audience. Although the audience is never clearly identified, several assumptions can be made. It seems as though Prufrock is simply reflecting on life to himself. He makes several statements that would allow a reader to arrive at this conclusion. Throughout the poem, he asks several rhetorical questions of himself. In line 62, he asks “and how should I presume?”. He asks himself the same question again in line 68 and then follows with another “and how should I begin?”. These questions lead the reader to believe that the poem represents Prufrock’s inner-thoughts about life. This is important to consider because if the audience was anyone but Prufrock himself, the poem would more than likely take a very different course.

Once you get past the initial misconceptions about the poem due to its misleading title, you can easily see that this is a poem about what happens if you do not make the most of your life. Prufrock is a character that we all can learn something from. Through an interpretation of this poem, one can assume that even though a person’s life may seem to be normal and in fact successful, sometimes that person may have a totally different view of their own life. From the poem we can conclude that Prufrock’s life was like many others during the time it was written. It talks of parties, drinking, and lovely ladies. This did not, however, bring his happiness. As he aged, Prufrock was left very disenchanted with his life. In the end, he discusses how he will behave in his old age and finally describes death as what can be interpreted as drowning in the sea.

“The Love song of J. Alfred Prufrock,” by T.S. Eliot is about a man who is searching for something to break him for the dull life that he has been leading. In the beginning, the speaker invites us to go with Prufrock and come into his world with the statement “Let us go then, you and I.” Throughout the poem, the reader is following the speaker throughout an evening searching for the acceptance of a woman. Because of his lack of self-assurance, he fails to find the meaning and acceptance of his love. Prufrock is a timid man. He is extremely conscious of what others think of him and this has a great effect of his actions. He has problems with speaking what he feels and this is demonstrated when he “prepare(s) a face to meet the faces that (he) meet(s).” He also extremely self-conscious with his appearance and thinks that people talk about what he looks like and what he wears. Other’s opinion of Prufrock bothers him so much so that he does not want to “disturb the universe” by making an entrance into it.

Finally, the last part of the poem, Prufrock show’s his final despair in life. He can not bring himself to tell the woman that he is in love with how he really feels. However, if he ever did decide to tell her, it would come out as a mess. He finds himself with no real role in life. He is no “Prince Hamlet, nor was he meant to be,” but rather an “attendant lord,” or sometimes “the Fool.” He hears the mermaids singing, but he thinks: “I do not think they will sing to me.” In the end, Prufrock feels left out of society, and can not find his own place in the universe.

As an old man on the beach, looking out into the ocean, he questions if he did the right thing. But he missed everything, all because he was scared. He realizes that he has been living in an imaginary world. When this reality hits him, he drowns soul and all. This poem has always been a favorite of mine because the theme of can apply to the world as a whole. Each of us can sometime find ourselves searching for where we belong in the universe,but are afraid to act on our own desires because of the possible outcomes. In the end, we have to make our move, and not fear rejection so much so that we pass up an opportunity of a lifetime.

The speaker of this ironic monologue is a modern man who, like many of his kind, feels isolated and incapable of decisive action. Irony is apparent from the title, for this is not a conventional love song. Prufrock would like to speak of love to a woman, but he does not have the nerve. The poem opens with a quoted passage from Dante’s INFERNO,

“If I thought that my reply would be to one who would return to the world, this flame would stay without further movement; but since none has ever returned alive from depth, if what I hear is true, I answer you without fear of infamy.”

Meaning that Prufrock speaks only because he knows no one will pay attention to him and he won’t be heard. Purfrock repeats certain phrases to clue the reader in that they are part of the story. “You and I” in the first line, suggest that you must be with him to understand his story. 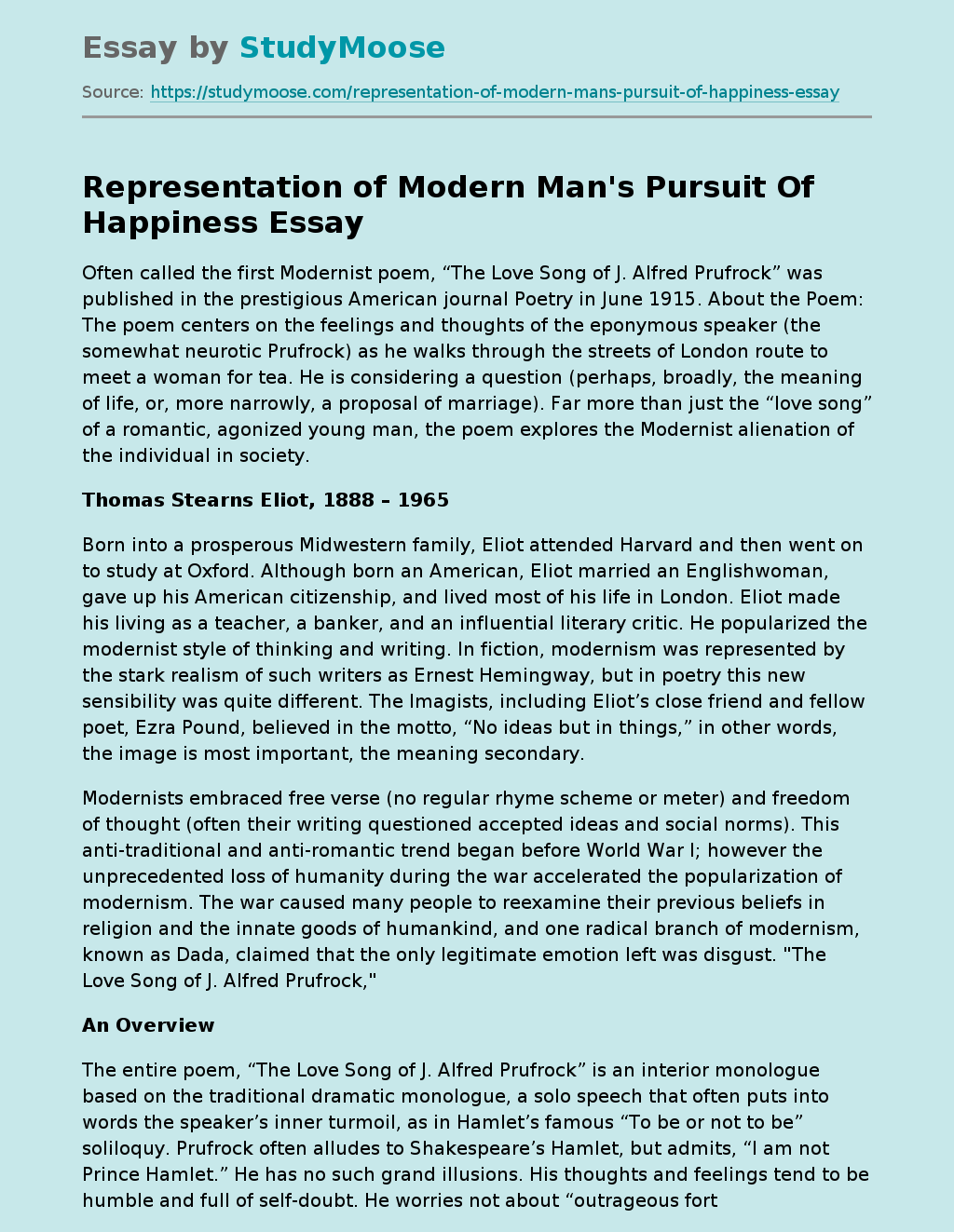