Movie "The Pursuit of Happiness"

An amazing movie, The Pursuit of Happiness illustrates through the examples of Chris Gardener’s life that anyone has the opportunity to achieve their own pursuit of happiness, if they have self-motivation and determination. Happiness is not something that can be pursued. We already have all the capacity for happiness that we need. Happiness comes from within, and from being content with oneself. People can choose to be happy or choose to be miserable. But to be happy or to be sad they need to have particular motivation or self-determination for it.

Don't use plagiarized sources. Get your custom essay on
“ Movie “The Pursuit of Happiness” ”
Get custom paper
NEW! smart matching with writer

Motivation is defined as a desire or need which directs towards a goal or something that someone wants. Motivation is an inherent response; it comes from inside and cannot be imposed from the outside, and comes from wanting to do something of one’s own free will. A motivating condition may be defined as an emotion, desire, physiological need, or similar impulse that acts as an animating to action and is the set of processes that moves a person towards a goal.

Motivation consists of five basic theories. The last theory is called humanistic theory and this is perhaps the most important of all. According to Abraham Maslow, an inventor of humanistic psychology, humans are driven to achieve the maximum point of goal at some point of their lives regardless of any obstacles and hindrances. Maslow developed a pyramid called Maslow’s Hierarchy of Needs and it argues about five levels of needs beginning with physiological needs and ending with our need for self-actualization.

In the movie Pursuit of Happiness, the main character Chris Gardner was played by Will Smith, who had lost everything in some financial crisis. He ended up living in homeless shelter with his kid. He was jobless to support his kid and his wife, so his wife leaves him. Motivation drives him to struggle until the very end to get rid of this situation. Chris had motivation, he had to feed and care for his child. To feed your child and raise them properly is probably about the strongest motivation a person could have. Chris’ son reminded him daily of his need to succeed and get control of his life. Not only did Chris have motivation, he had an incredible attitude and was confident in himself. If not for his confidence and attitude he most likely would have never become the successful stock broker he ended up being, much less even made it into the internship.

Chris, after falling on hard financial times his son was left homeless. Chris manipulates working a full time unpaid internship, bringing his son to daycare, and finding a bed to sleep each night in Church. Chris and his son are not leading an easy life. One day, Chris finds some free time and decides to play basketball with his son. Where he tells his son that his dream to play basketball as an NBA player will never become true, and he can never be a good player, so he should stop playing. Yet Chris has a sudden change of heart and gives his son a speech to encourage him to always try his hardest and not let anyone shuts him down. Chris tells his son, “Don’t let anybody tell you, you can’t do something. Even me,” “You gotta dream, you gotta protect it… You want something? Go get it. Period (_The Pursuit of Happiness.)”_ In first Chris decreases his son’s expectancy by telling him that he wouldn’t be able to play as a basketball player.

In this movie the character of Chris is shown an extremely determined person. According to psychology, in order to be determined you have to let your mind make the decision that you have to get to the very end. It’s like a goal that you have to achieve it. It’s the end of your work. It could be either good or bad. A very good example which proves that Chris Gardner is determined person is when Chris did not have any money left to pay for his rent. He didn’t just say I don’t have any money and give up on everything, he rather told his land owner that he will pay him the money and so he did, he was so determined to pay for his rent, so determined that he painted the walls of his apartment to make money so that he could pay off his rent.

The another great example of being determined is when Chris trusted the hippie girl with one of his bone scanners and when the hippie ran away with the scanner, he did not just sit back and lose his faith. He runs after that lady and finally gets his scanner back. The third example of being determined is when Chris kept calling although many people such as his manager keep distracting him from his work and turned him down, but he never gives up and ended up getting business from a CEO of a big company which shows that what determination brings to him.

Chris Gardner had hope and motivation not to give up. He was very hopeful and optimistic individual and never gave up throughout his life. He decided what he wanted to do and he actually went for it. Even though his motivations for being in the stock market were not the correct ones, but it still even didn’t drag him to despair. An admirable illustration that proves Chris Gardner really is a hopeful and Optimistic person is when Chris’s wife had left him and he did not break down.

He in fact was totally optimistic and did as far as conceivable to take care of his child as a single parent. Further example for Chris Gardner’s optimistic nevertheless hopeful individuality is when he took a chance of an internship that offered no salary, and he took that job even though he was literally broke. The third impressive example would be when one of his scanners that Chris was selling got broke. He did not get disappointed and lost his hope. He actually took some notable action and donated blood to the hospital so he could get paid for that. With that money in his hand he bought the bulb for his machine and repaired it.

According to Maslow’s pyramid Chris was hanging on the very bottom of it, because he did not have a permanent shelter where he could live with his son, and he has very little money for the food. Since he had no job so he was not secured either. With all these negative things Chris’ self-esteem was very high as is shown in the movie when he showed up into interview with no shirt on and paint all over his body and hair and he still gets selected. The reason why, is because he was very and confident and he had firm belief in himself, so he gets respected by others too. They didn’t just judge him the way he looks but how well he can perform his job and they offered him the internship job. Even though the job was no salary based he still accepted it and worked very hard till the end to get the actual job at same place.

In the end, your motivation to change something about yourself may come from a variety of sources, perhaps a little because of pain, a little because you’re inspired to be a better person, and a little because your spouse would like you to stop a habit that’s driving both of you crazy. Becoming aware of your primary motivation to change is the best source for setting off a new path, a new direction of life. No matter who or what the circumstances are, every person who is considering changing something about her or himself has a reason; a motive to change that can reinforce and strengthen the resolve to change when change becomes difficult.

Movie "The Pursuit of Happiness". (2016, Aug 12). Retrieved from https://studymoose.com/movie-the-pursuit-of-happiness-essay 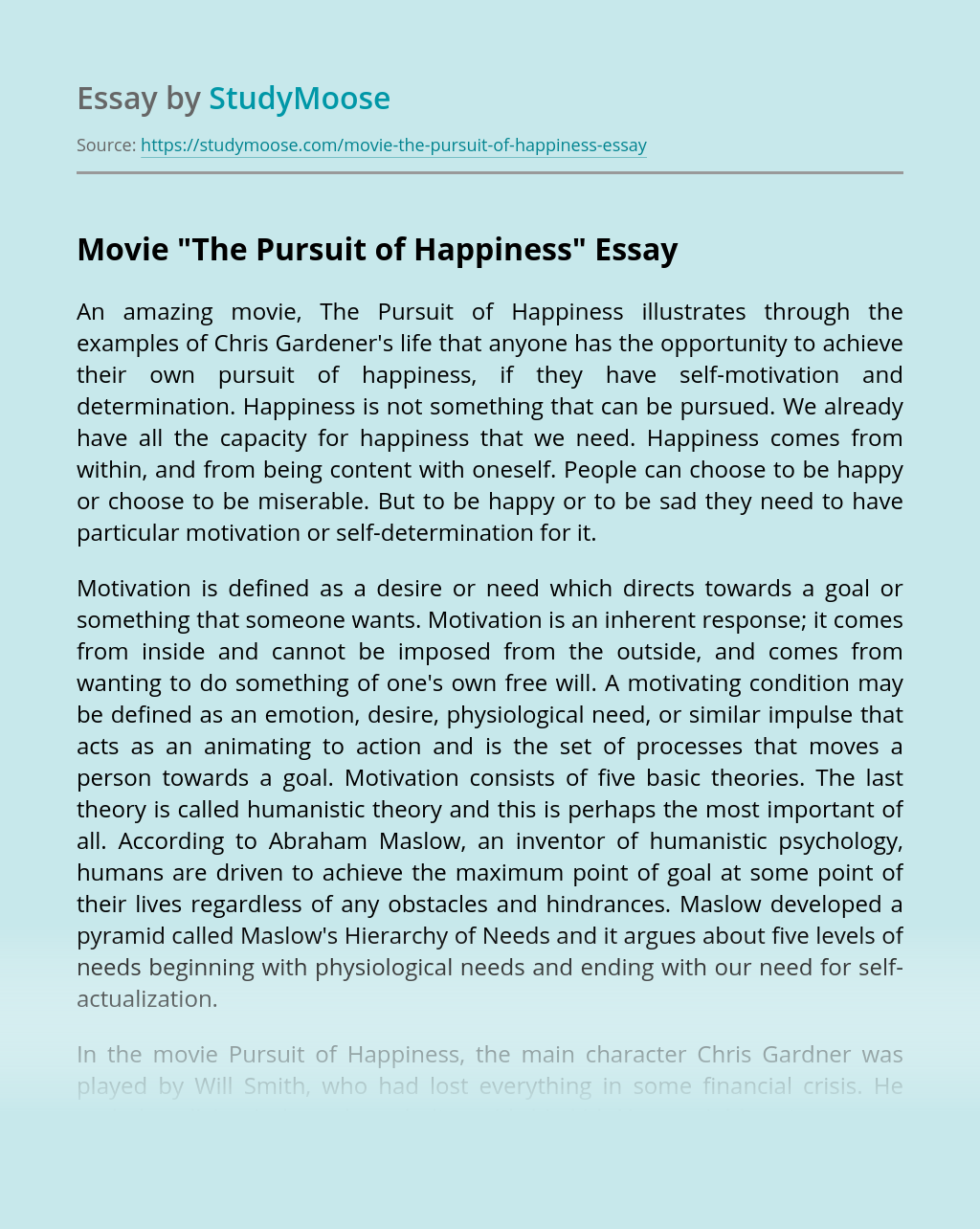