"Raisin in the Sun"- Play vs Movie

The film did a very good job of portraying the emotions the characters were experiencing during the play.

The strongest scene in he book would have to be when Walter turned down the money he would get for not moving into the neighborhood . I felt this took a lot of guts on his part. I also thought that this was a turning point in the novel. By Walter not accepting the money it showed that he not only grew through out the play, but also that he put many things into perspective.

His family became the most integrate part of his life, by the end of the novel he realized what was more important. He took a stand for not only him self but for his family when he didn’t accept the buyout. I think Walter’s unexpected decision to save his integrity by sticking with the move to Claybourne was the best. In snuck up on you better in the book and a certain intensity hung in the air longer.

I think that the best scene in the motion picture was when Walter had his hand on the check they received. The director focused right in on Walters face and you could actually see a crazed look on Walters face. It foreshadowed that Walter was going to do something.

I felt that when I watched the film I felt more emotion. In a way I enjoy reading more because in your mind you can imagine whatever you want, but in a film, you see what the director sees.

I still think that being able to view the film helps convey the emotions that each character feels simply by being able to watch them interact with one another. You seemed to get attached to each individual character.

I think it goes without saying that Bobo’s bad news is by far the most dramatic scene in the motion picture. Although it was also very good in the book I believe the film portrayed the emotion of despair better through the facial reactions of the actors. Of the few changes in the film none of them really bothered me. In fact I’m glad the Ms. Johnson seen was cut. The point was nagging and disruptive to the flow of the story. I do believe that the last discussion between Asagi and Beneatha was articulated better in the book. The whole, outlook on life as a Idealist or a Fatalist(Realist)in comparison to geometry carried much deeper in print.

I believe that the another good or second most intense scene in the motion picture of A Raisin in the Sun is when Ruth comes home from the doctor and reveals that she is pregnant, and then when Walter Lee hears the news later that she is thinking about an abortion, he has no reaction, doesn’t try to stop her or anything. I think it is powerful because it shows how serious and driven he is about getting rich. I feel like that is all that Walter Lee wants; to be powerful, rich, successful, and most of all these are the only things that will make him happy. I have mixed emotions on Walter Lee as a character. In the play I felt more compassion for him, however when I viewed the film I disliked his character because of his refusal to look at the bigger picture. Perhaps because I am a person who is more like Mama or Ruth, I don’t or I am very scared to take big risks. Perhaps this is why I have difficulty understanding why Walter can’t pursue his dreams but in a more subdued or safer manner.

Usually, I enjoy the book over the film, however in this case I think the film is better. I wish that the book was set up as a novel instead of a play. I think a lot of the dramatic detail is lost in reading a play. I think the scene when Walter found out the money was gone was very strong in the movie, much more so than in the play. I also thought the scene with Lindner in the movie was more successful. I think in this case it better to hear the tone in the actors’ voices

I feel another good scene in the motion picture occurred when Walter comes back from making the phone call to Karl Lindner and explains to his family his plan to take the white community’s money that was offered to the Youngers in return to not move. The scene accomplished a few points. For one, it displays how greedy and frustrated Walter is and how he can no longer stand the financial position that his family has been in for years. Walter seems to be overcome with a search for power and a drive to become wealthy and leave the life of being a worker behind him. It also shows that he cares for his family seeing how he is striving to give them the best, but that aspect is overshadowed by his greed.

I feel the scene also shows the Younger family at its lowest point in the movie. Walter is on the complete edge and is thinking of stealing a community’s money and the rest of the family, besides Momma, seemed to lose their faith and trust in him. When things seemed hopeless with the loss of the money, they only became worse as a loss in more than money occurred. A loss in their character, faith, history, and respect for each other overcame the family, particularly Walter and Beneatha. Nevertheless, Momma soon sets Beneatha straight with an emotional and positive speech about how there is “always something left to love” and sets the standard that the family should adhere to. It marks the turning point at the end of the movie

There were few differences between the movie and the book Raisin in the Sun. I felt that the movie just gave you a visual to understand and relate to the characters more. The one major difference between the two was the sequence of events from the movie to the book.

The most dramatic scene for me was when Bobo tells Walter Lee that Willie ran off with his money. I really felt that he was going to physically hurt Bobo. I chose this scene because I understood Walter’s frustration and anger where as in the book I didn’t get the same impression. I felt he didn’t react that upset in the book. I watched the original black and white version with Sidney. I truly believe he was amazing I couldn’t think of anyone who could have done a better job. I don’t think he over reacted.

I didn’t see any differences between the book and motion picture. It was word for word. It didn’t bother me that there weren’t any differences between the two. I feel that the motion picture makes the book come to life. I prefer movies over books because I’m a visual person. In the motion picture you can see the characters expressions and behavior and emotions where as in the novel they are just written out. It’s harder for me to picture the scenes taking place in my head because i may not interpret what i read the way the author would.

A touching scene in the film for me is at the end by Mama. It is the scene when she has the monologue about love. It was actually one of my favorite scenes in the book as well but for some reason it just jump off the screen in the film. The scene takes place after Walter has lost the money and the family appears to be in disarray. I especially love the lines ” Have you cried for that boy today? I don’t mean for yourself and for the family ’cause you lost the money. I mean for him.” This scene was important to me because it again illustrated Mama as the most dynamic characters as well as put a somewhat spin on an obviously sad moment in the family.

One of the reasons that the film differs from the novel has to do with time. Especially when it first appeared on Broadway. Certain scenes were just left out for reasons of shortening the production and certain scenes were dropped because of chemistry in the actors. This does not bother me that much since I often watch film versions of written work I always try to look at the films as interpretations of the book and never as a copy or replica. This is especially true in works meant initially for the theater, after all live action and recorded images couldn’t be much further from each other. In this instance I generally liked the film version, it made me aware of the subtle imagery like shadows and light that I previously over looked in the novel.

It also gave me a visual reference to things like the apartment and in particular the window. Another interesting difference between the to is that for some reason Ruth struck me as a much more important character in the film as opposed to the novel. The fact that the film was not in color actually made the experience more real to me. After all this was an environment by the author’s own description that was often void of light and hope.

Although there are dozens of strong scenes in the book one of my favoriteoccurs on pages 92-95. In thid scene Mama is telling the family about the house in Clybourne Park. This scene is important for many different reasons. First off it shows the dreams and aspirations of Mama, it also thrusts Mama on the defensive, “(Frghtened at this telling) Well-well-it’s out there in Clybourne Park-” p.92. This scene goes on to show the dreams of Mama as well as the reactions of her children. This decision of Mama affects the family profoundly as Walter and Ruth express ther disdain towards Mama’s decision. Mama also has one of the most profound statements in the novel and one that is in response about this novel ultimately being about the American dream. “Son-Ijust tried to find the nicest place for the least amount of money for my family.” A statement like that is not only pertinant in this situation but I believe any responsible adult could make the same then or now.

The strong character of Mama is the idealist in this situation, the one who just wants to better her families situation. The scene goes on to show Walter’s digust at his mother’s decision but I believe there is more there as well. This decision of Mama’s not only goes against his dreams but I believe it shows a glimpse into his psyche. I believe Walter views this decision of Mama’s as undermining his responsibilities as the man of the house. Not only can he not provide for his family but he isn’t even involved in the decisions of the household. This scene is important because in just a few pages you see the relationship between Mama, Walter and Ruth (arguably the three most important characters)as well as the hopes and dreams of Mama and eventually the family ingeneral. 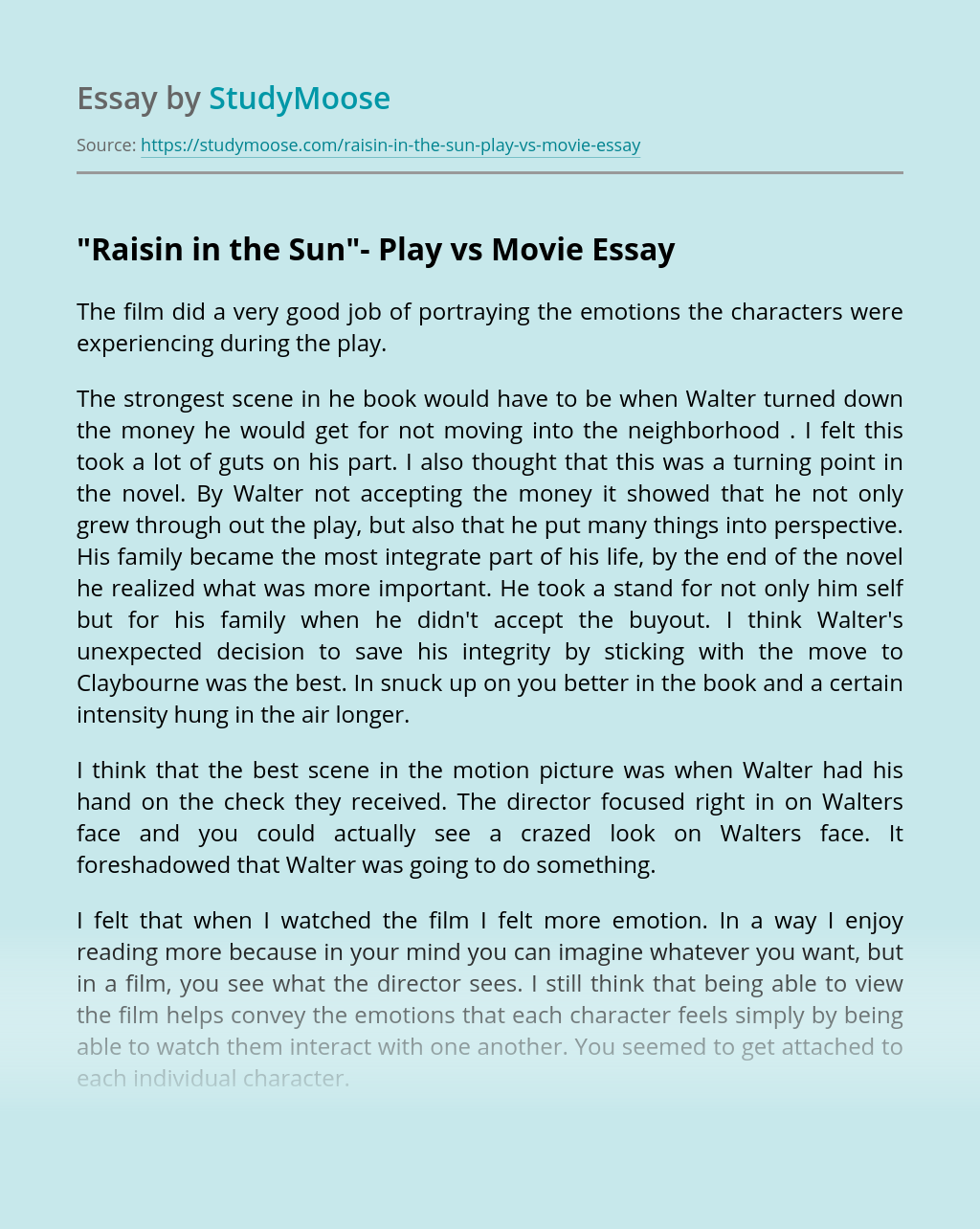 Don’t waste time
Get a verified expert to help you with “Raisin in the Sun”- Play vs Movie
Hire verified expert
$35.80 for a 2-page paper
Stay Safe, Stay Original