Death theme In the play "Hamlet" by Shakespeare

Death has always been the most debated subject regarding humans belief. It is part of life, yet a mystery nobody has experienced to tell. It is said to drive people’s actions, however Death is still a mystery as the whole human race still wonders how it acts on people’s lives and what is next after Death. In the play Hamlet, Shakespeare uses the theme of Death to drive the characters actions, and portrays the tragedy through their dialogues and significant symbols to create a tragic atmosphere.

The first sign of Death is the appearance of King Hamlets ghost. The play is set only two months after his death, which is the lead for the events following in the play. He appeared at the platform before Elsinore castle as Horatio pictures, with that fair and warlike form (Shakespeare I.i.55-56 p1326). Even the apparel suggests a killing attitude. The Ghost, the symbol of Death, reveals the truth of him being murdered by his own brother to his son, Hamlet, and asks for revenge.

Because of King Hamlets death, Claudius gets the throne and Gertrude betrays her late husband and remarries with Claudius.

The murder and the betrayal, therefore, become the main grounds for Hamlets actions. The young Hamlet is given a valid reason to be mad and willing to accept the role of spreading death. The Ghost is the seed for killing, revenge, and death later on in the play (Boyce, Ghost). Another foreshadowing of Death in Act I is the line of Marcellus: Something is rotten in the state of Denmark (I.

iv.99 p1342). The feeling this guard gets is from the scene of the ghost, along with the dreadful death of King Hamlet not long ago. It also foretells the outcome of the story.

Death is presented mainly through characters dialogue. When Hamlet does not know yet the true reason of his fathers death, he thought about committing suicide. Deeply depressed about his mothers too early remarriage, Hamlet considers the opportunity to escape the “whips and scorns of time.” Here he thinks of Death as an escape; however, he has great fear of it. He explains his inability to end his life by questioning the moral of his actions:Whether tis nobler in the mind to sufferThe slings and arrows of outrageous fortune,Or to take arms against a sea of troublesAnd, by opposing, end them. To die, to sleep -No more – and by a sleep to say we endThe heartache and the thousand natural shocksThat flesh is heir to… (III. i.l 65-71)

He views suicide as a chance to escape his own depression, but he realizes that for in that sleep of death what dreams may come. The dreams of the sleep of death mean there may be a worse situation after the suicide. The Prince wonders how people bear to grunt and sweat under a weary life, as he discovers, it is because of their fear of Death:But that the dread of something after death,The undiscovered country from whose bournNo traveler returns, puzzles the willAnd makes us rather bear those ills we haveThan fly to others that we know not of…” (III. i.86-90)His statement describes the explanation of humans fear for death. It is an unknown mystery of the afterlife that prevents hamlet himself from committing suicide.

Despite the fear of Death, his fathers demand for vengeance gradually changes hamlet into the weapon of Death. The massacre begins when Hamlet confirms Claudius is the real slayer of his father. Hamlet stabbed Polonius as he thought that was Claudius in the Queens room. For many reasons the death of Polonius is the most important death. Because Hamlet kills Polonius, he has blood in his hand and thus will be revenged. Therefore it is no surprise that Laertes, Polonius son, will soon kill Hamlet as they meet. Poloniuss death also offers Claudius an opportunity to get rid of Hamlet. Since Hamlet now knows the truth of Old Hamlets death, as long as he is nearby, Claudius is no longer safe. Claudius smartly uses this occasion to mask himself as a loving stepfather, and also to stage the death for Hamlet.

Furthermore, Poloniuss death makes room for another death, Ophelias. Her death, in addition to Poloniuss death, makes heavier cause to Hamlets doom. When Polonius is alive, Ophelia is absolutely obedient and dependent on him “Ill teach you: think yourself a baby” (I.iii.110 p1338). It is possible to say that Hamlet indirectly kills Ophelia through slaying Polonius. With her suicide, Laertes her brother is given even more reason to kill Hamlet. In the chain of Death, the following one is Laertess. He is driven to face his fate by Claudiuss manipulation and Hamlets carelessness. Hearing the news of Poloniuss death and his sisters going mad leading to her suicide; he goes mad and thirsts for Hamlets blood. However, just how Hamlet avenges his fathers death with the price of his life, Laertes too will avenge his family in exchange with his youth in the grave.

Death itself is also presented through Hamlet the protagonist character. Although at first he fears Death, slowly he becomes the sword of Death; and then he becomes a represent of Death after killing Polonius and then in the graveyard scene in Act IV (Boyce, Hamlet 1). Hamlet fully realizes that everyone’s fate is death, regardless of status or wealth. He also realizes that no matter what a person does in life, in death, that person is merely nothing Your worm is your only emperor for diet: we fat all creatures else to fat us, and we fat ourselves for maggots: your fat king and your lean beggar is but variable service, —two dishes, but to one table: thats the end (IV.iii.22-26 p1390). Or again in the graveyard, as he picks up the skull of Yorick his childhood friend, the dear yester: ; as thus: Alexander died, Alexander was/ Buried, Alexander returneth into dust; the dust is earth; of earth we/ make loam (V.i.168-169 p1410). Death transforms the human nature in Hamlet.

Upon conversing with his dead father, Hamlet’s mind becomes occupied with the death-provoking demands of revenge from the Ghost. From a young man fearing for Death and still longing to live his youthful life, Hamlet becomes a murderer, accepting Death as inevitable and letting it control his life. Hamlet fascination with death grows and he no longer considers his actions, wanting only to complete his vengeance, and pays no heed to what other circumstances his actions may bring. Although he weeps bitterly when he hears of Ophelias death, he surrenders to the idea that death is only a part of life (Boyce, Hamlet 2). His journey to complete his revenge is meant to be a process of learning how to die (Quinn). Finally, as Claudius and Hamlet both fall, Denmarks throne is left without a heir. Death sweeping through Denmarks royal family, leaving the nation itself dead, as it falls into the hand of Fortinbras, a Norway prince.

Hamlet is the drama of Death, of Revenge, of tragic conflicts between human beings. Our lives are driven by other forces, as Elizabethan works suggest, by Ghost and Death as symbol for supernatural forces on Earth. In Hamlet, Shakespeare discussed this through the death of Denmark royal family, and of the country itself after the revenge of the young prince for his father.

Death theme In the play “Hamlet” by Shakespeare. (2016, Jul 29). Retrieved from https://studymoose.com/death-theme-in-the-play-hamlet-by-shakespeare-essay 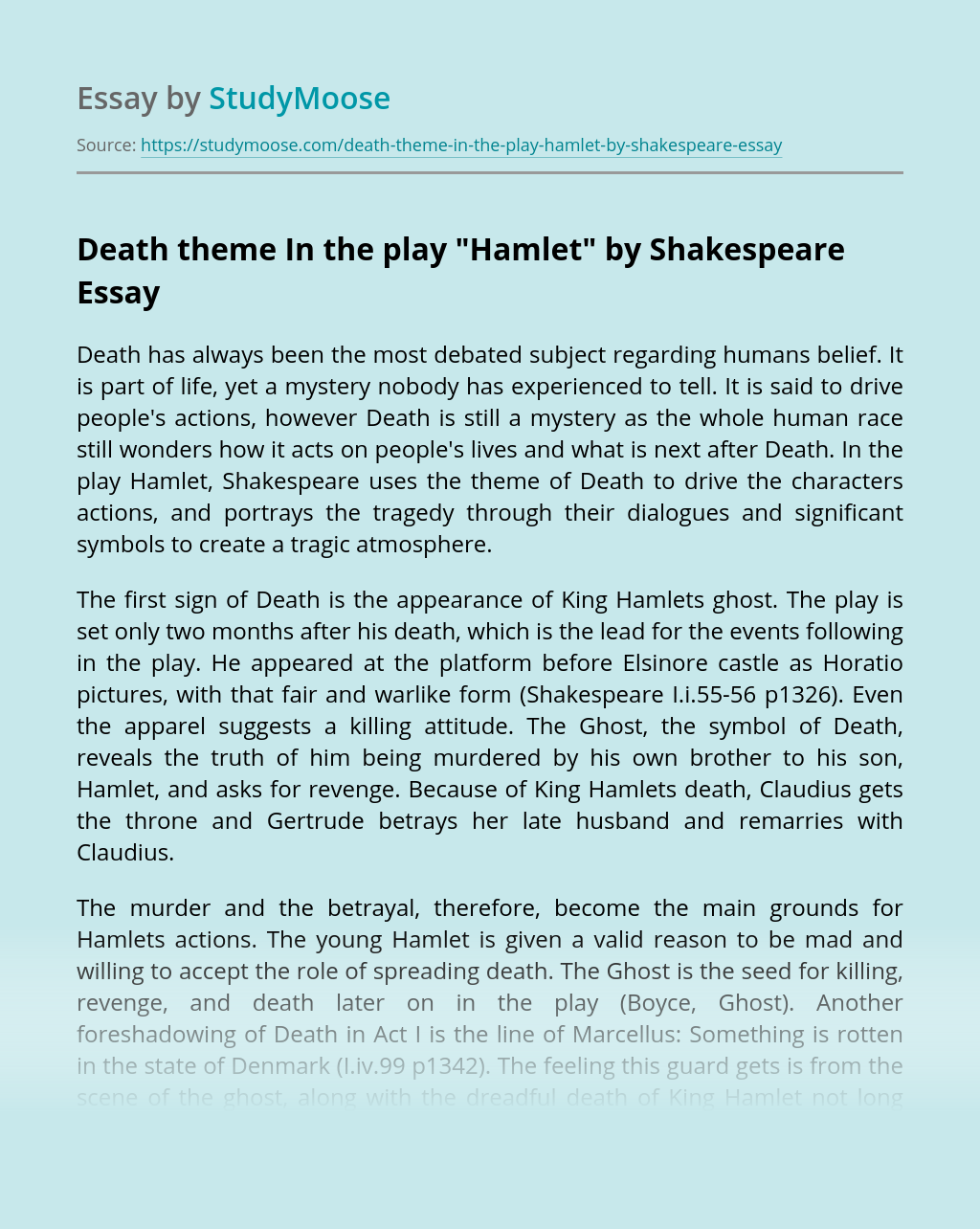 What differentiates Hamlet from other plays from Shakespeare is that the action we expect to see, and particularly Hamlet’s action, is continually postponed while Hamlet tries to understand the truth about his father’s death and about what he should do. This play poses a certain number of questions that other plays would have taken for...

Hamlet thesis on decay and corruption

William Shakespeare’s Hamlet has been considered the greatest tragedy to ever be written. With a focus on the third of five acts in Hamlet, Shakespeare develops the theme of both physical and psychological decay and corruption through the actions, dialogues, and figurative language of the characters. The evidence of this theme can be seen though...

Get Essay
What Is the Significance of Hamlet's Soliloquies?

In What Way Is Hamlet Relevant in Our World Today?

In that question, the word Hamlet is not underlined because the play itself is not nearly as relevant as a whole as Hamlet the person is. The play is full of allusions, jokes, and implications that is difficult for a modern audience to pick up on and understand their significance to the overall work. After...

“Choose a play in which there is a conflict between key characters. Explain how the conflict arises and, by referring to appropriate techniques, go on to say how the conflict adds tension to the play, and whether is it resolved.” William Shakespeare’s shortest tragedy ‘Macbeth,’ charts the rise and fall of the titular character and...

The Insight About Hamlet's Elusive and Mysterious Character

Hamlet’s famous and memorable soliloquy, “To be, or not to be,” provides us with insight on the different emotions Shakespeare places into Hamlet’s character. This soliloquy is spoken by Prince Hamlet in Act III, scene I, lines 62-96. It is arguably one of the most famous speeches in English literature and reflects many important themes...

Preoccupation with Death in Hamlet

“Hamlet” is a play permeated with death. Right from the opening scene of the play death is introduced, where the ghost of Hamlet’s father introduces the idea of death and its consequences. Preoccupation with death is a major theme in this play as shown in the numerous deaths of the main characters of Hamlet, Polonius,...