After studying and reviewing the book Hamlet, there are many different types of themes that stand out. Subterfuge was one of those themes and it is an important theme with several examples from the book supporting it. Many of these examples are important parts in the book and they all seemed to have something to do with secret plans. Upon reviewing many themes of Hamlet, Subterfuge was the theme that stood out the most to be the major theme of Hamlet.

Don't use plagiarized sources.
Get Your Custom Essay on Subterfuge: Theme of Hamlet Just from $13,9/Page

One example of the theme subterfuge is Laertes and Claudius plans to kill Hamlet. When they are sitting with each other discussing ways to kill hamlet, they both come up with secret plans to execute Hamlet. When Laertes says to Claudius, Where it draws blood no cataplasm so rare, collected from all simples that have virtue under the moon, can save the thing from death, Claudius agrees with Laertes secret plan. Claudius then tells Laertes of his plan that would forsurely kill Hamlet if he was to escape Laertes plan.

Another example of subterfuge is the re-enactment of the murder of King Hamlet where Hamlet has his little plan to see if the ghost was telling the truth. Hamlet has a plan to see if Claudius was really responsible for the death of King Hamlet by watching his reaction during the play. Hamlet achieves this plan by telling the player to Speak the speech, I pray you, as I pronounced it to you. Hamlet has another plan up his sleeve to watch the Kings facial reactions when he says to Horatio, Give him heedful note; for I mine eyes will rivet to his face, and after will both our judgments join in censure of his seeming. Both of the ideas from Hamlet are secret plans, which again supports the theme Subterfuge.

After Laertes departs to France, Polonius wonders if Laertes has been behaving properly. This is an example of subterfuge because Polonius has a secret plan to find out how Laertes is behaving by telling Reynaldo to spy on him and to spread stories about Laertes. When Polonius says to Reynaldo, and thus do we of wisdom and of reach, with windlasses and assays of bias, by indirections find directions out he means that from telling lies, you will find the truth. After spreading lies, Reynaldo is to see if Laertes confirms these stories or not. Reynaldo obeys Polonius demands when he is told by Polonius to Observe his inclination in yourself.Claudius and Polonius plan to accidentally overhear a conversation between Hamlet and Ophelia is another example. Polonius comes up with an idea of where to spy on Hamlet and Ophelia when he says to Claudius, Be you and I behind an arras then.

After hearing Hamlet and Ophelias conversation, Polonius still believes that rejected love is the reason for Hamlets madness. Polonius then comes up with yet another plan. This plan consists of Polonius secretly hiding behind curtains in the Queens room to eavesdrop in on a conversation between Hamlet and his mother. After the play, let his queen mother all alone entreat him to show his grief.The King and Queen also had there secret plan to get Rosencrantz and Guildenstern to come visit Hamlet and to try there best to find out what is causing Hamlets madness. When Rosencrantz and Guildenstern arrive to the castle, Queen Gertrude politely says to them, And sure I am two men there are not living to whom he more adheres. If it will please you to show us so much gentry and good will, as to expend you time with us a while for the supply and profit of our hope, your visitation shall receive such thanks. Her plan is to see if Rosencrantz and Guildenstern can find out whats wrong with Hamlet since they are two very good friends of his.

There are a couple more small examples of subterfuge. One example is Claudius plan to kill Hamlet by secretly sending a letter to the King of England to execute Hamlet upon arrival. Another one is Fortinbras huge plan to make it seem like his army and himself are going to take over Poland when his actual plan is to get his long last revenge to take over Denmark. The last example is when Hamlet demands Horatio and Marcellus to keep it a secret about seeing the ghost.

He makes them promise when he demands them to Never speak of this that you have seen, swear by my sword.Subterfuge, out of all themes, was one of the major themes in Hamlet. Throughout this essay, there have been many examples given that all represent the theme subterfuge. The reason why they all represented subterfuge very good was because every single example was either a plan or a secret. Even though subterfuge is one of many themes of Hamlet, it is the one that stands out the most and represents many important parts in the book. 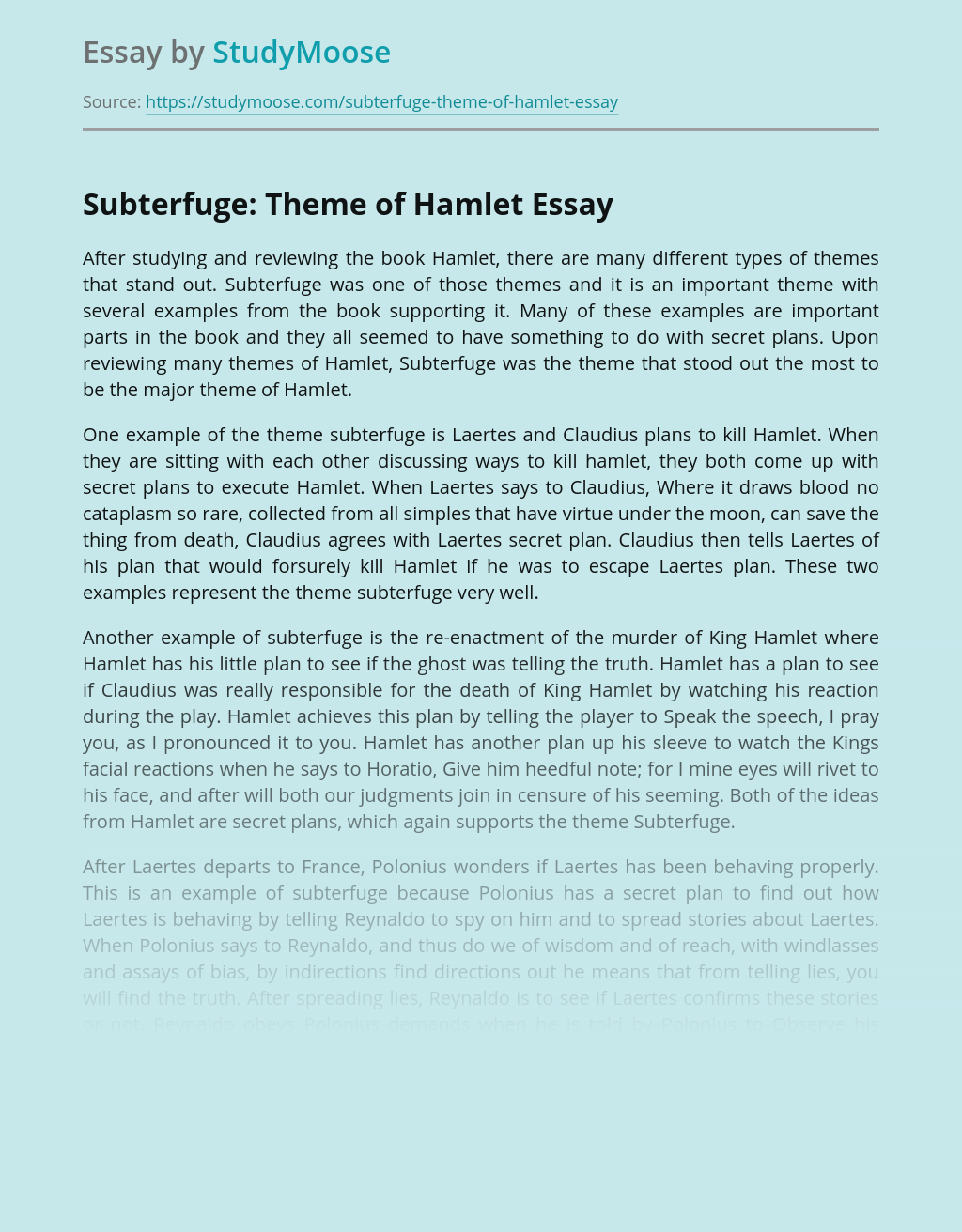 I would have such a fellow whipped for o’erdoing Termagant (II,ii,14)Hamlet is giving instructions to the troupe of actors that has come to the castle. These actors are going to perform a play within a play and Hamlet has added some lines to the play in the hope of exposing Claudius’ treachery. “Termagant” is an...

Get Essay
Understanding of Hamlet

Good morning teachers and students, our understanding of Hamlet takes many turns and the most important of these is in act 3 scene II. As a pivotal scene in William Shakespeare’s play, audiences gain an understanding of the characters and their actions leading up to this point. Many of the themes in the play come...

Something is rotten in the state of Denmark'

Marcellus comments that something is rotten in Act One scene four, after Hamlet has seen the ghost for the first time and has departed to talk to it. In a short space of time, Marcellus has seen the ghost of the old King in arms and Hamlet, the heir apparent to the Danish throne airing...

– Eugene has written 28 plays. His most famous works include The Lesson (1951), The Chairs (1952), and Rhinoceros (1959). -Eugene has been recognized as a leading writer in the Theatre of the Absurd. His plays break theatrical archetypes of plot and sequence; explore mortality, and introduce existential conundrums while utilising over imaginative, unrealistic and...