The Theme of Indecision in Hamlet

The essential component to any tragedy, Greek or Shakespearean, is a protagonist with a fatal flaw. In Greek tragedy this is called hamartia. This Latin term translates directly into the word “flaw” but is usually used to describe an excess of a personality trait – virtue or vice. The protagonist’s fatal flaw pushes the the plot and action of the tragedy forward. It is this tragic flaw, which leads to the eventual downfall of the character, his circumstances, and the denouement of the drama.

In examining the bulk of the literature’s protagonists, no other character embodies the essential role of the flawed protagonist like Hamlet.

Without the flaw there would be no drama, and no irony and  it would end with quick death and frustration. Hamlet’s fatal flaw is idealism which leads to indecision. The rising action, falling action, and resolution, in Hamlet, can be attributed to the theme of indecision. Hamlet, the Prince of Denmark, is a bright young man with many talents.

He is an academic, a witty orator, and a flawless actor. Certainly, he has the potential to do anything he wants which may have included, in the future, being the King of Denmark.

His aptitude for all things calls into question why there is a great delay between Hamlet’s decision to avenge his father’s murder and the actual revenge. It is Hamlet’s idealism which leads to indecision and the reevaluation of  his choice to kill Claudius. Hamlet “showed all the signs of a noble and well-balanced sanguine temperament.

”   Joseph assumes that Hamlet is not experiencing insanity and he is in perfect mental health – the embodiment of everything a good Elizabethan should be. Hamlet actions should not attributed to mental illness but the purity of his soul.

He believes fully that men were born good and were meant to do good things. His strong belief system contrasts strikingly with the reality and corruption of the world when he returns home. He comments on the state of Denmark and more specifically his father’s house, “‘Tis an unweeded garden that grows to seed; Things rank and gross in nature possess it merely” (Act I, sc ii). He is disgusted not just by his home community but the evil which existed in his family. Upon the realization that the world was cruel he describes life as a “prison” (Act II sc ii).

He finds it difficult to resolve his illusions of what his world was with the reality of the situation. It is idealism which allows him to conceal his bitterness while his internal will pressures him to avenge his father’s death. Hamlet attempts to use logic, a typical idealist characteristic, to determine what course of action he must take. Hamlet struggles with idea that he may be a coward for his inaction. At this point in the play Hamlet does not understand that it is his ‘goodness’ that is delaying his revenge.

Despite his nightly supernatural chat with the ghost of his murdered father, he is still unsure if justice should be done by his own hand. The plot shows Hamlet to be a first class detective — he uncovers a criminal who has committed a perfect crime, and only in his more scholarly moments of soliloquy has he time to consider despising himself. This makes a good point in that Hamlet has to figure out for his own peace of mind what truly happened to his father. He understands that if Claudius did kill his father he must kill Claudius.

He understands that in a world of lies it was hard to tell truth from fiction, and a sinner from a saint. Hamlet states, “the native hue of resolution is sicklied o’er with the pale cast of thought”(Act III sc i), and concludes that the death of Claudius must be based on justice not emotional revenge. Therefore, Hamlet must have independent proof that his uncle murdered his father. The play with in plays is a common tool used by Shakespeare and is present in Hamlet. It is also the only way Hamlet, besides direct conformation, is going to be able to tell if Claudius is guilty.

It is for this reason that Hamlet invites players in to perform a “murderous” play to ferret out the truth from his mother and new father. Hamlet’s inability to understand the motives of evil in actions and thought can also be attributed to his sole idealistic viewpoint. He does not understand why anyone would commit murder and therefore he is uncertain that he had ability to violently kill a man. Murderous revenge represents everything that Hamlet is not. Hamlet’s rational intellect allowed him the clarity of mind to understand both the good and bad in the act of the revenge.

The mental degradation of Hamlet, is believed to be insanity by the other characters but it was clear to the audience that he is merely coming to terms with what he believes to be right. Hamlet is a religious man and murder was a sin. Hamlet is a man of classical philosophy and revenge is not rational. In “The Mind of Man in Hamlet”, Levy writes “In Hamlet, man is still the rational animal, but a revolution in understanding the operation of thought occurs”. Levy statement that Hamlet is still ration is true.

Choosing to appear mentally impair is good strategy because if the characters believe he is unwell, he will not be able to figure out the true. Hamlet’s true character remains unblemished. Hamlet is a man who believes in chivalry, and slaughter is not gentle. Hamlet is trying to be worthy of the times in which he lives is not so far in essence from the protagonists of Greek drama. His fear of the risk of damnation is not something that can be called a moral flaw ; yet it acts like one, paralysing his will, making him behave like a coward. It is those idealistic qualities which causes the postponement of Claudius’ death.

It is in the moment that Hamlet allows his emotion to dominate over his intellect that Claudius was killed. He is consumed by the thoughts of his father’s demise and is haunted by the knowledge that his father’s soul will not be able to rest until his death is avenged. Hamlet willfully concludes,  “My thoughts be bloody or be nothing worth” (Act IV sc iv). It is then that Hamlet finally had the ability to suppress his idealistic nature, and do what is right. The murder is not a well planned scheme and occurs in the heat of the moment. Hamlet,  after the murder of Claudius never once wavers in his decision.

He has done what is right and believes that “There is a special providence in the fall of a sparrow” (Act V sc ii). Oddly enough fatalism is part of idealistic theory and therefore Hamlet always remains true to himself and his idealism. Hamlet’s idealism makes him the perfect tragic protagonist and leads to theme of indecision. Without his intense regard for the ideals of truth, justice, goodness and beauty there would be no play. His fatal flaw, the belief that men and therefore the world are inherently good, created a moral dilemma which the characters, and plot revolves.

Even Hamlet, the academic, comments on the presence of hamartia in human nature. He stated: oft it chances in particular men That for some vicious mole of nature in them, As in their birth, wherein they are not guilty, By the o’ergrowth of some complexion, Oft breaking down the pales and forts of reason, Their virtues else, be they as pure as grace, As infinite as man may undergo, Shall in the general censure take corruption From that particular fault. (Act 1, sc  4). Hamlet continues late in the resolution of the play, “though I am not spleenative and rash Yet have I in me something dangerous” (Act V. sc i. )

Critics believe  while Hamlet is “Normally not rash at all, he is capable of extreme rashness when provoked extremely. The “something dangerous” is the proud impatience that there is in his otherwise noble sense of public mission. It is Hamlet’s idealistic nature mismatched with his pragmatic circumstances, which creates the ultimate theme and driving force behind all the rising action, falling action, and resolution of this tragedy.

The Theme of Indecision in Hamlet. (2017, Mar 16). Retrieved from http://studymoose.com/the-theme-of-indecision-in-hamlet-essay 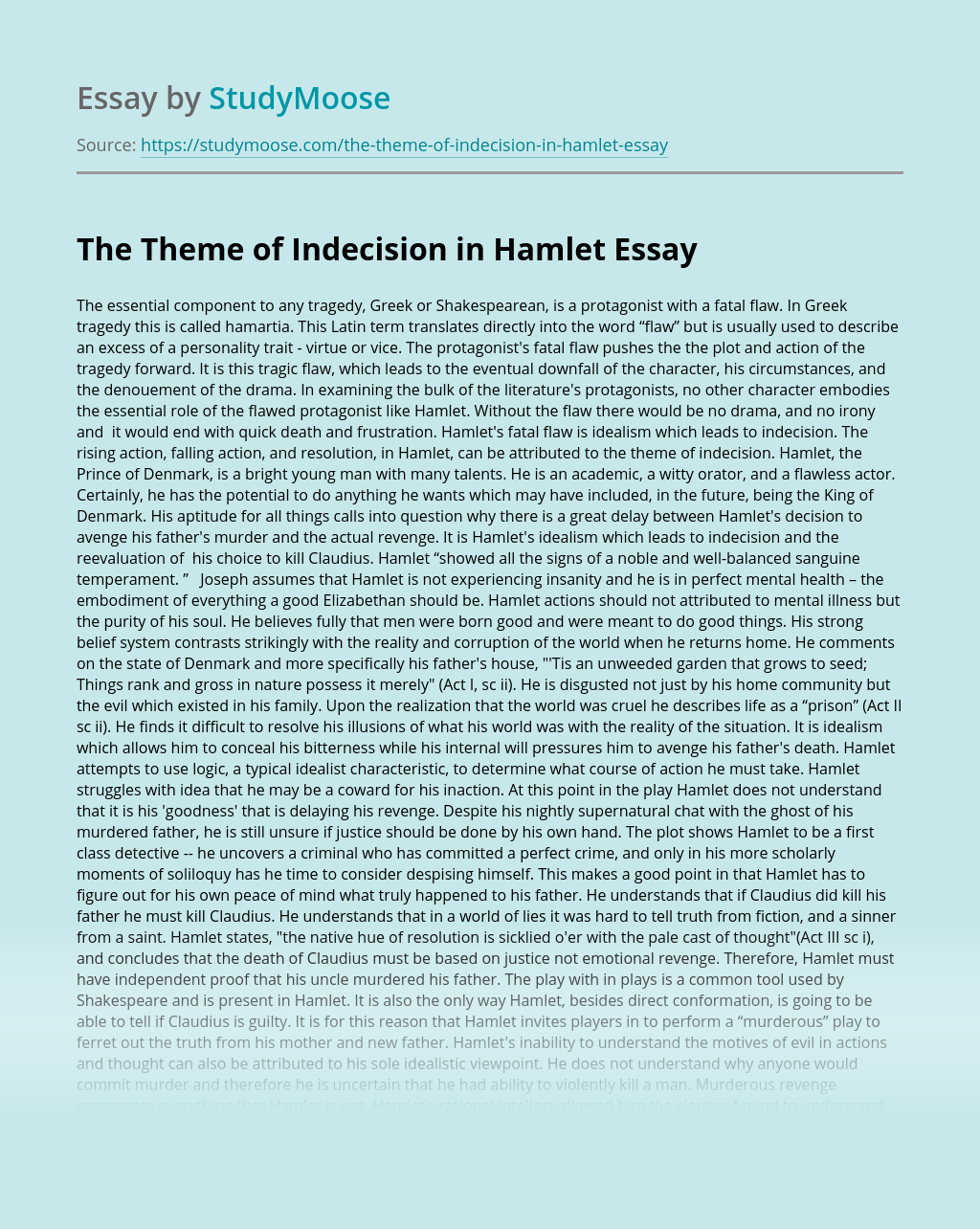 Don’t waste time
Get a verified writer to help you with The Theme of Indecision in Hamlet
Hire verified writer
$35.80 for a 2-page paper
Stay Safe, Stay Original