Theme of Revenge in Hamlet

In the play Hamlet written by William Shakespeare, several characters attempt to lure their foes into their death as payback for any wrongdoing. This highlights the main theme of revenge in the play. Revenge is a constant theme throughout the plot. Not only does it underlie almost every scene, but it also has a major effect on the story as a whole. Three of the main revenge plots within the play are Hamlet’s aim to avenge his father by killing his uncle, Laertes’ target to avenge the murder of his father by killing Hamlet, and Prince Fortinbras’ wish to reclaim his father’s land.

Turn in your highest-quality paper
Get a qualified writer to help you with
“ Theme of Revenge in Hamlet ”
Get high-quality paper
NEW! AI matching with writers

These three revenge plots play a major role in presenting to the audience the theme of revenge through a series of developed plans to trick one another.

Shakespeare first uses the revenge theme to create conflict between Hamlet and Claudius. In Act I, Hamlet is visited by the ghost of his father, who makes Hamlet aware of his murderous death completed his brother.

The ghost says this to Hamlet regarding Claudius, “Revenge his foul and most unnatural murder” (Shakespeare, Hamlet, I, v, 25). This is where Hamlet is first introduced to the revenge plot between himself and Claudius. Hamlet wants to insure that the ghost really was his dead father before he kills Claudius. Hamlet wants to entrap the King by making him admit his actions. To do this Hamlet has people act out the death of his father in front of Claudius and declares him guilty by his reaction to the play, “O good Horatio, I’ll take the ghost’s word for a thousand pound” (III, II, 281-282).

Hamlet affirms Claudius’ guilt to Horatio and now realizes that he must continue on with his revenge plot. Hamlet’s desire to get revenge for his father is the driving force to the development of the play.

While Hamlet takes the length of the play to take action, Laertes, upon hearing of his fathers’ murder, reacts swiftly and recklessly. He returns to Elsinore threatening to overthrow Claudius if he does not explain the death of Polonius. When Claudius tells Laertes that Hamlet is responsible, Laertes swears he will have his revenge; “Only I’ll be revenged. Most thoroughly for my father” (IV, v, 133-134). He immediately agrees to take part in the King’s plan to kill Hamlet. Laertes conspires with the King to deceive Hamlet and challenge him to a fencing match, where Laertes will kill Hamlet with a poison-tipped rapier. For good measure, Claudius also prepares a cup filled with poison ready for Hamlet, if Laertes’ sword fails to achieve its goal. King Claudius and Laertes’ plan to exterminate Hamlet works, but it comes along with their deaths as well, which reinforces the theme of vengeance. While Hamlet and Laertes are at opposing ends of the spectrum, however, Prince Fortinbras is in the middle. When King Hamlet kills Young Fortinbras’ father, his reaction was neither delayed nor reckless. In contrast to Hamlet’s procrastination and Laertes’ haste, Fortinbras reacts rationally. Rather than excessively contemplating his circumstances or acting on impulse, he calmly and deliberately forms a practical plan to avenge his father’s death and reclaim his lands. He assembles an army, and arranges plans to have that army march to Denmark. The Prince tricks the King by explaining to Claudius that his army is simply marching through Denmark, and that he had no intentions on attacking it. He arrives, conveniently, soon after the carnage at Elsinore has unfolded. It is no coincidence that Fortinbras, who acts rationally and decisively, is the only one of the three characters to survive the play. Shakespeare uses Fortinbras to show that acting with rationality rather than on impulse or with excessive contemplation results in the superior end. Hamlet, Laertes, and Fortinbras are three individuals who were placed in a similar position, but who reacted in drastically different manners. Hamlet, who acts slowly and with much contemplation, and Laertes, who acts with reckless anger, represent polar opposites. Meanwhile, Fortinbras’ rational, deliberate execution represents the ultimately superior combination of the two. Even though they all contrasted for the most part, they all did have one thing in common: secretive plans to entrap one of their rivals. Shakespeare’s masterful use of characterization therefore illuminates that aspect of human nature that gives us an impulse to seek revenge, and shows how different responses to that impulse can have drastically different results. Revenge is shown as a chain reaction by Shakespeare that all starts with a stealthy blueprint.

Theme of Revenge in Hamlet. (2016, Feb 27). Retrieved from http://studymoose.com/theme-of-revenge-in-hamlet-essay 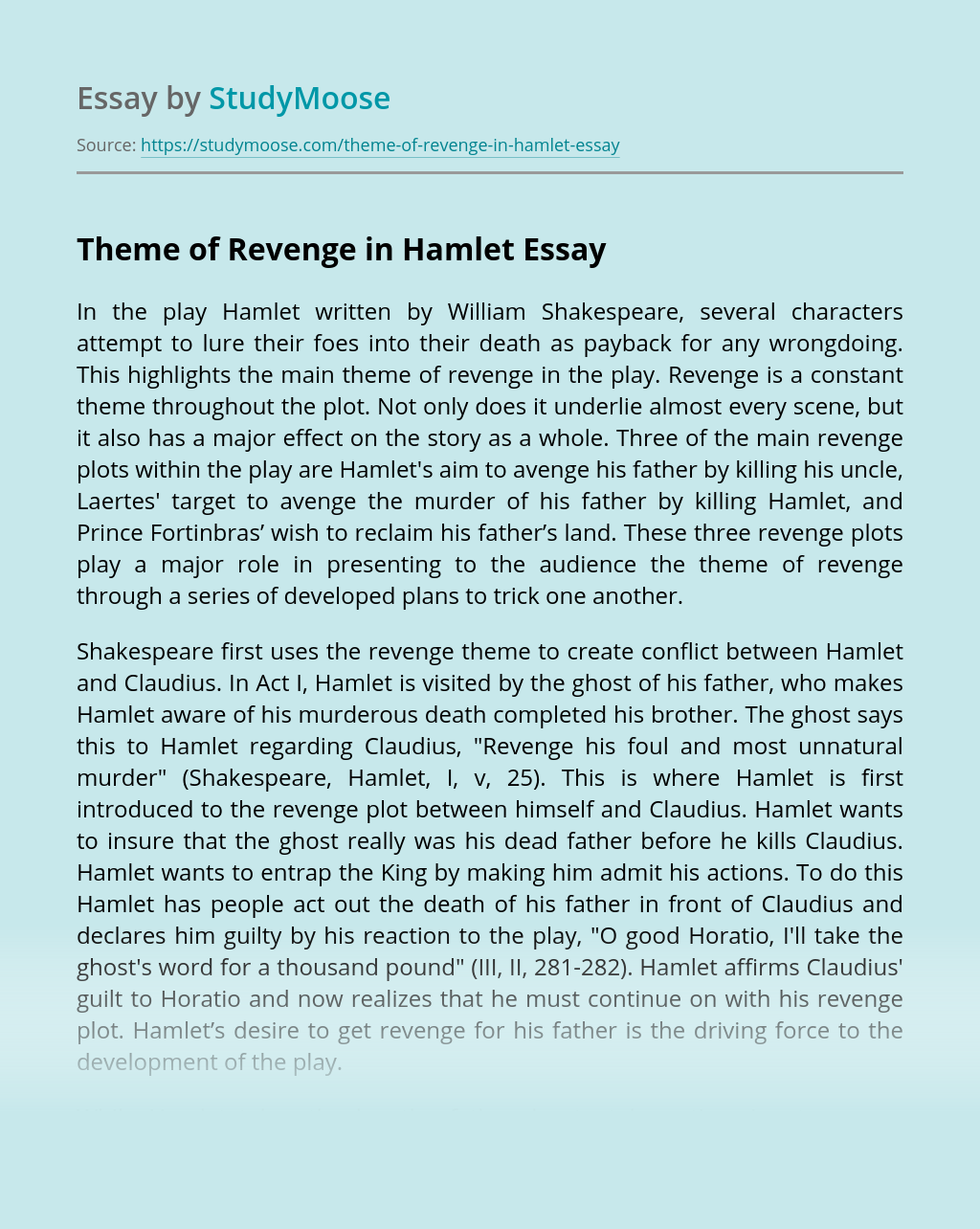 Turn in your highest-quality paper
Get a qualified writer to help you with
“ Theme of Revenge in Hamlet ”
Get high-quality paper
Helping students since 2015
Stay Safe, Stay Original