The Deeper Meaning of Hamlet’s Revenge

Hamlet, by playwright William Shakespeare, revolves around the burden of revenge. It all started from the beginning with the murder of King Hamlet, Hamlet’s father. Hamlet finds out the killer had been his uncle, Claudius, and sets out to avenge his father’s death. Claudius, however, is now the king and he has also married the queen and possesses all of the things he once envied his brother for. Every action Hamlet makes is founded upon the thought of revenge and he makes this evident throughout the play, although it seems there may be a deeper meaning to Hamlet’s revenge than meets the eye.

Don't use plagiarized sources. Get your custom essay on
“ The Deeper Meaning of Hamlet’s Revenge ”
Get custom paper
NEW! smart matching with writer

He portrays the straight forward reason of avenging his father’s death for his revenge; however he may just be concealing the deeper anger he has towards his uncle and his mother. Hamlet has felt this anger against Claudius since the beginning of the play, even before he discovered his uncle was his father’s murderer; and when Gertrude married Claudius a mere month after his father’s death, Hamlet was furious, not only because he thought it was incestuous but because she showed that her love for King Hamlet was not as strong as Hamlet though it had been and it hurt him.

One of the first scenes of revenge was the “play within the play,” also known as “The Mouse Trap;” Hamlet’s self written work of which he used as an experiment to confirm his accusations of Claudius being his father’s murderer.

He says, “I’ll have these players play something like the murder of my father before mine uncle. I’ll observe his looks; I’ll tent him to the quick. If he do blench, I know my course” (II, ii, 623-627).

This is his excuse to proceed on the course of revenge the ghost of his father led him on. In the article, “’His Semblable is His Mirror: Hamlet and the Imitation of Revenge” by David Scott Kastan, he says, “to be Hamlet, to deserve the name, at least as far as the ghost is concerned, is to be a revenger” (Kastan). In other words, the ghost convinces Hamlet that the only way to be worthy of the name he was given is to kill Claudius and avenge his father’s death.

The ghost definately played an obvious role behind Hamlet’s actions, however, it was ultimately Hamlet’s decision; he chose to go through with his plan and doing it in such a manner that was highly disrespectful towards his uncle, who was now the king, showed that his hostility was specifically directed at Claudius. Another example of Hamlet’s revenge was Claudius’ “praying” scene. This scene did not necessarily portray his action towards achieving his revenge, but more his inaction.

Hamlet had the chance to kill Claudius right then, but he stopped himself. He realized Claudius was praying and he knew that if he had killed him while he was praying, Claudius would probably have gone to heaven and he did not want that. He wanted Claudius to live in eternal damnation if he were to die. However, what he didn’t know was that Claudius had not actually been praying. He attempted it but couldn’t find it in himself to actually ask for repentance from god (III,iii).

Harold Skulsky’s, “Revenge, Honor, and Conscience in Hamlet,” states that, “Hamlet is devoted, at this point at least, to the death of his uncle’s soul; and the devotion is not ennobling. His idea of mercy as a physic to prolong disease is a grotesque parody of the medicinal function traditionally ascribed to equitable punishment” (Skulsky). It is true; Hamlet is now devoted to the death of his uncle’s soul and also to its damnation. Skulsky describes this devotion as not ennobling or honorable, and this statement is also agreeable.

He dishonors his family name by being “mad” and committing actions that tarnish his reputation. Hamlet, however, does not care what happens to how he is perceived, as long as he reaches the goal of what he is trying to achieve. This ruthlessness exhibits his hatred toward his uncle very well, especially in this scene, where he refuses to even kill him because he wants to go as far as to even put Claudius’ soul into damnation. Hamlet’s ordeal finally comes to an end at the end of the play when his mission for revenge is finally complete.

Claudius is revealed as a murderer in front of everyone; however Hamlet is doomed to die in a short period of time due to being wounded by a poisonous sword that Laertes tried to use to kill him. He realizes he needs to finish his job and quickly kills Claudius by stabbing him multiple times with the poisonous sword, as well as forcing him to drink from the poisonous cup that was meant for Hamlet in the first place but instead killed Gertrude. Bring poisoned twice causes Claudius to die almost instantly (IV, ii).

The Deeper Meaning of Hamlet’s Revenge. (2017, Jan 09). Retrieved from https://studymoose.com/the-deeper-meaning-of-hamlets-revenge-essay 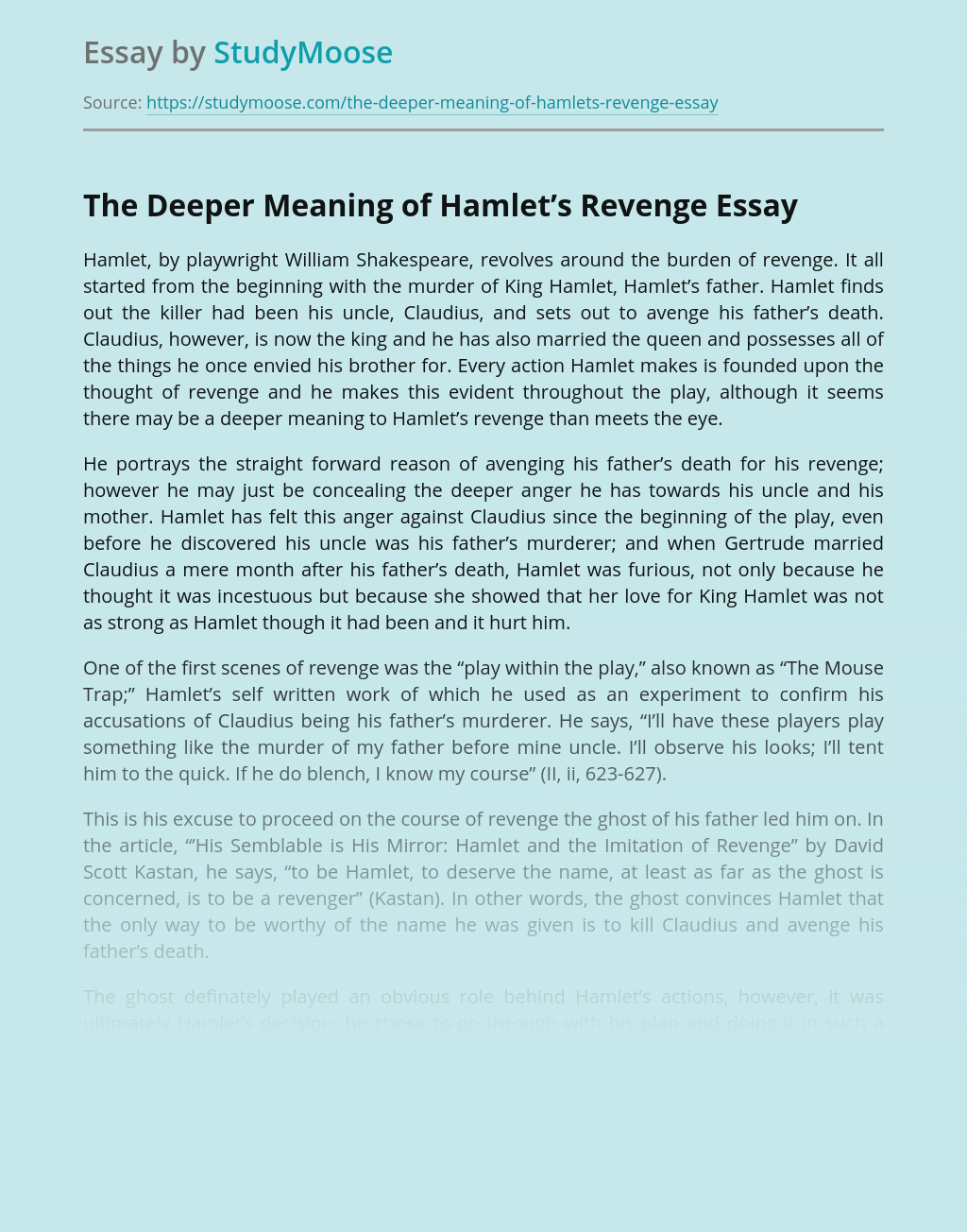