The Canterbury Tales: A Deeper Meaning

Geoffrey Chaucer was an medieval poet who wrote The Canterbury Tales. A piece of medieval literature that consisted of pilgrims telling two tales on the way to Canterbury and two more on the way back. Whoever the Host decides that has told the most meaningful and entertaining story would receive a free meal upon their return. This literature was considered a masterpiece that provided the best modern image of the fourteenth century of England. The Canterbury Tales is made up of 120 tales but only 24 of those tales were completed.

Don't use plagiarized sources. Get your custom essay on
“ The Canterbury Tales: A Deeper Meaning ”
Get custom paper
NEW! smart matching with writer

During his time, Geoffrey Chaucer was considered the greatest English poet. Each masterwork revealed an deeper meaning within. Reading The Canterbury Tales, you will see how Chaucer used allegories that exhibited the power of greed and selfsame sovereignty throughout this piece of literature.

An allegory is an symbolic fictional narrative that conveys a meaning not specifically set forth in a narrative. Allegories may have meanings on two or more levels that the reader can understand only through an interpretive process.

Proficient in: The Canterbury Tales

Literacy allegories typically describe situations and events or express abstract ideas in terms of material, objects, people, and actions. Writers may use an allegory to add different aspects of meanings to their work. It makes their stories and characters complex, so that they stand for something larger in meaning than what they literally stand for. An allegorical piece of writing can give an insight into its writer’s mind on how they view the world, and how they wish the world to be.

The Canterbury Tales is an perfect example of an allegory. The Pardoner’s Tales illustrated the power of greed, and The Wife of Bath revealed selfsame sovereignty.

The Pardoner from Chaucer’s Canterbury Tales, tells a story in the form of a sermon, an exemplum, to be exact. He intends to teach the congregation that ‘money is the root of all evil’. The Pardoner’s Tales, is about three rioters who go on a mission to seek death and kill him. Instead of finding death, an old man guided them to a tree which had gold beneath it. The gold symbolizes death because it led the rioters to sin and they became very greedy. They fought for the gold and tried to figure out plans on how to get the gold to themselves. In the text, one of the rioters says,’ If one could get the gold away, back to my house or else yours, perhaps so how you know, the gold is ours chaps, we’d all be at the top of the fortune’ (L 23-24). The rioters wanted to steal the gold without having any concern about who it belonged to or how it got there. In the end, no one got what they wanted. The lesson learned behind the allegory, “money is the root of all evil”, is having self indulgence is not the way to live life.

The Canterbury Tales: A Deeper Meaning. (2021, Apr 01). Retrieved from https://studymoose.com/the-canterbury-tales-a-deeper-meaning-essay 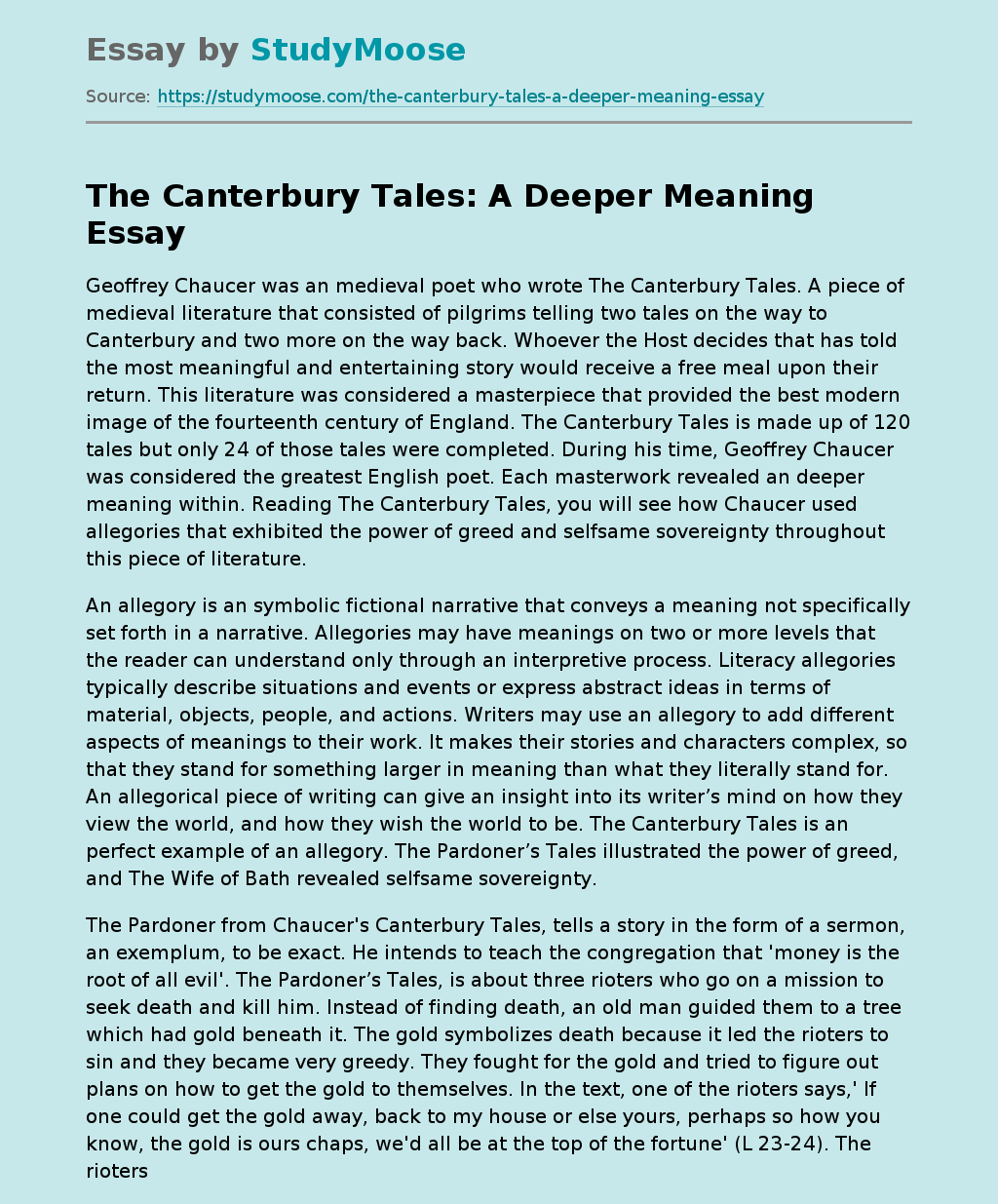