Dante completed The Inferno, the first part of his epic redemptive poem The Divine Comedy, around 1314. This date could technically fall under the label of the Renaissance, but it was at a very early stage and the humanistic revival of art and culture had yet to reach anywhere near the full impact it would later achieve. Dante did not live to see the widespread influence of humanism and its effect on the world of literature, although there is much evidence in Dante’s writing of humanistic inclinations.

Don't use plagiarized sources. Get your custom essay on
“ Dante’s The Inferno and Chaucer’s Canterbury Tales ”
Get custom paper
NEW! smart matching with writer

Humanism literally means ‘the study of man’ and can be conceived of as an awakening of the self, both in its personal application and in the social and political implications on Renaissance-era European society. Until the Renaissance began to establish itself over the course of the fourteenth century, European citizens had very much regarded themselves as part of a collective cultural or political way of thinking.

The introduction of philosophy, art, literature, poetry and increasingly well-defined systems of morality gave many Europeans a feeling of liberation and the confidence to explore their individuality.

It was encouraged to study classic literature, as well as all other forms of art that liberate the mind. Of course, it was to be a while yet before these ideas found their way into the current literary and artistic output, but the work of Dante often seems to pervade this and is almost predictive of the humanistic influences that would soon dominate literature.

Whereas a god-fearing Medieval populace had embraced and unquestioningly abided by the teachings of the Church, humanists began to draw equal influence from their devoted studies of literary classics and the liberal arts.

This did not lead to a rejection of religious values, by any means, but did result in increased concentration on improving life as lived on Earth, as well as laying foundations for a favourable position in the afterlife, which had previously been the priority.

This led to many humanists taking total control of their own life and destiny, rather than submitting to the futility of a pre-determined fate. These themes are reflected with impressive cultural foresight in Dante’s The Divine Comedy, and perhaps most significantly in The Inferno. Throughout the poem, Dante meets a wide range of characters, with vastly different personalities and stories to tell, many of whom Dante has previously encountered. His friends and enemies alike are given the respect of their individuality, their distinctive personalities highlighting them among the population of sinners.

Due to the first person narration – Dante is not merely the protagonist, but also the storyteller – we see these characters through Dante’s eyes and his various reactions to different aspects of them further establish their individuality and bring the themes of blossoming humanism into greater prominence. The character of Farinata Degli Uberti, for example, is described as if he seems to hold the entirety of Hell in disrespect. Each character has their own individual reaction to their situation, and Dante has his reaction to these in turn.

It would have been a simple task for a third-person narrator to merely describe Dante journeying through hell noting the details of the punishments being administered to each collection of sinners, but by using the first person technique, Dante not only grants us a greater atmospheric experience, but also uses Dante’s reactions and personal points of interest as a way to bring the situations and motivations of the other characters into greater significance and impact. This illustrates the point that, despite a fantastical or mythological setting, it is still possible for such literary work to feel real and believable.

Dante’s poetry may be concise, but he does not neglect to flesh out the personalities of the other characters, and he at least gives the sinners the credit (if such a word isn’t too ironic in this context) of their respective sins. By isolating different characters in turn, and giving them a chance to explain their situation, he individualises them from the vast population of sinners, and further convinces the reader of the reality they inhabit. First person narration also allows Dante a technique of transition that we would perhaps nowadays recognise as cinematic.

Dante faints with grief in the second circle of hell, only to awake in the third. There is no need to explain this transportation, as we are seeing only what Dante sees and have only the same information at our disposal as Dante is able to gather while conscious. Before Dante, there was Chaucer, who showed no such concessions to the evolution of humanism. His medieval tales do not break stylistic or linguistic boundaries, but rather work with the traditional literary techniques of the day to create a world inhabited by colourful yet less three-dimensional characters than those who later evolved in the works of Dante and beyond.

It is my belief that the first-person narration performs an entirely different function in this case, than the realism and atmosphere invoked from Dante’s believable interactions. Each of Chaucer’s characters has a tale to tell. It is not always their own tale, but it is the tale which they are telling, and through which they present themselves. For they are presenting themselves, rather than merely being presented by Chaucer. But they are not only addressing the anonymous potential audience of Chaucer’s future readership, but their companions on the pilgrimage.

They speak to us as well as them, often revealing more about themselves that they seem to realise. The advantage in using first person narration to have his characters unknowingly set themselves up for criticism, is that he is able to expose their faults without appearing judgemental. It’s tempting to question the motivation for Chaucer to write from the point of view of a woman in The Wife Of Bath. When we are confronted with her strong opinions on the conduct of married life, we realise that this is more than simple character comedy and that Chaucer probably has a point to make.

The choice of language that Chaucer bestows upon the Wife of Bath, as well as her behaviour and the nature of her tale, serve only to enforce the accusations of lechery and destruction she claims to have faced by anti-feminists, while she seeks to deny them. Notably, she tells of spending Lent stalking houses and establishments in search of her next “grace”, or sexual conquest. This is after outliving four husbands, all of whose deaths could not be said to be unconnected to the libido and outrageous behaviour of the Wife of Bath.

It should be noted that, as far as the effect of the first person narration on the structure of the Canterbury Tales is concerned, then it is the case that it is the choice of narrative style that defines the structure (if not vice versa) and makes it a necessity. The characters are all companions on a pilgrimage, and the Canterbury Tales are accounts of the tales the characters entertain each other with on the journey – first person narration is the only real option with such a premise, as it would be redundant to explore each character with the same narrative voice.

The use of first person narration to have the characters show up their own flaws is again seen, without any immediately apparent use of subtlety, in the Monk’s Tale. It remains effective – in this case, the status of the character dictates our expectations of their conduct as well as their own pretensions. The Monk is rebellious and subordinate, almost heroic (in the literary sense) in the way he takes control of his life by refusing to let title dictate behaviour. In the Monk’s Prologue, the host says of him; “If you had the freedom, as you have the power, to copulate as much as you desire, a fellow like you would have fathered dozens! This establishes a rabid lustfulness to add to the list of the Monk’s hypocrisies.

The corruption of the church is further explored in The Friar’s Tale, which again takes advantage of first person narration to expose the weaknesses in the personality of the storyteller. His flaws are perhaps unfairly less forgivable than the Monks. The Monk at least could claim to possess a certain zest for life as a redeeming feature, whereas the Friar’s low level of morality is evident in more odious characteristics such as snobbery, corruption and prejudice.

It is now evident why first person narration was so suitable as to become necessary for Chaucer’s execution of the Canterbury Tales. He uses the technique to have his characters paint an often unintentionally but unmistakably honest portrait of his characters as revealed in their own voice. His characters are, for the most part, far from heroic, and Dante does himself no such injustices while narrating The Inferno. In conclusion, it can be seen that Dante and Chaucer choose to employ first person narration for vastly different reasons.

In the case of The Inferno, this perspective is ideal for the introduction of humanistic literary techniques and an increase in the importance of individual characterisation above role and gender stereotypes. It also increases the elements of adventure, as we are very close to Dante and the unfolding events. Ultimately, it serves to heighten the solo hope and futility of his epic quest (although not travelling alone, his destination is ultimately a personal one), while enriching the journey with the detail of characterisation and the characterisation of personally perceived detail.

Chaucer, on the other hand, has far more mischievous motivations, and employs the first person perspective throughout his many tales in order that the characters get a fair chance to present themselves and that we get a fair chance to judge them. He relishes the fact that, given enough rope, they will inevitably satirise themselves to a degree that cannot be argued with. 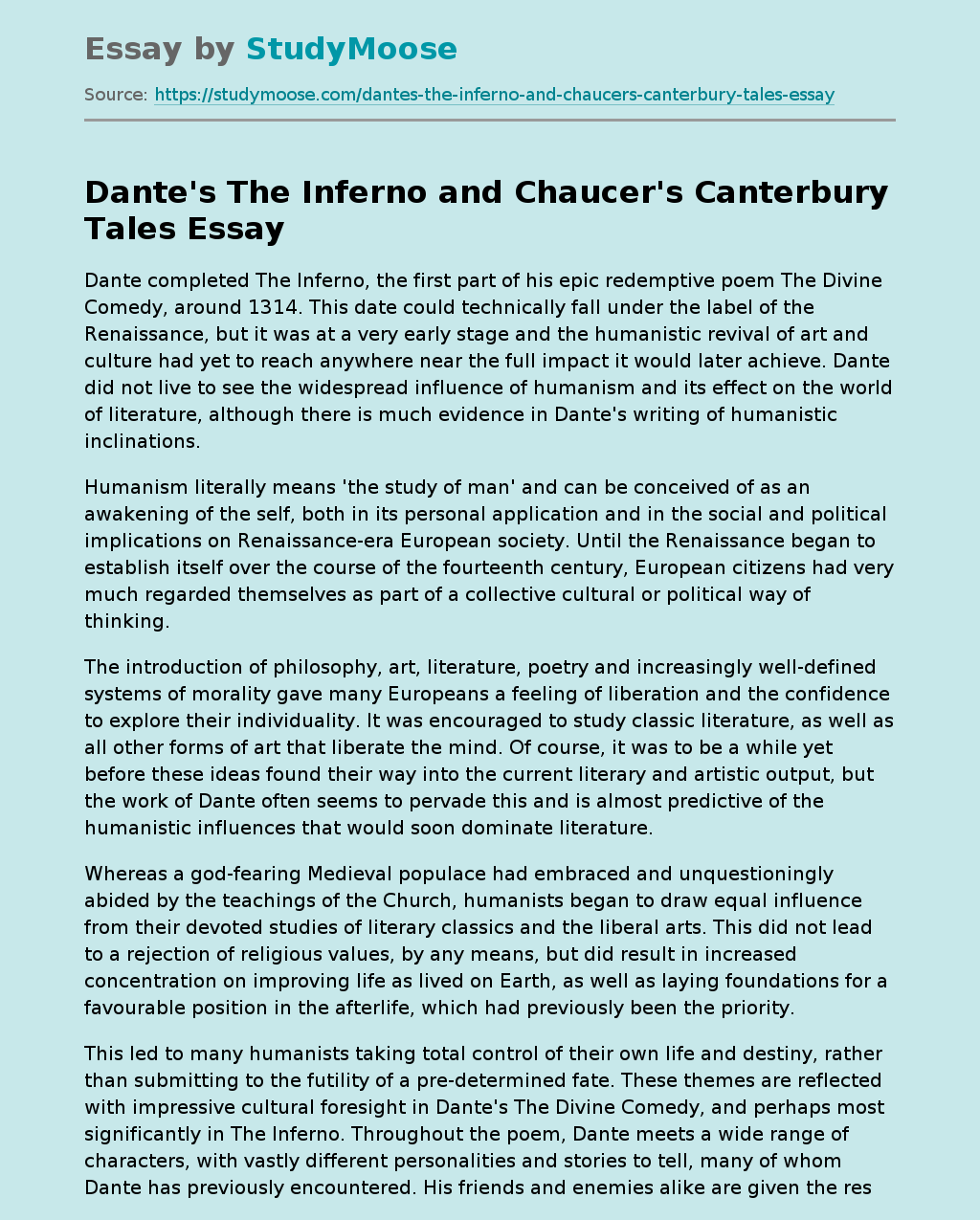