Character Analysis: The Clerk In Geoffrey Chaucer's The Canterbury Tales

In Geoffrey Chaucer’s The Canterbury Tales, of the narrator’s twenty-nine companions, few of them are described without criticism or irony. Chaucer delights in applying one, or even several, of the seven deadly sins to his fellow pilgrims while choosing a select few to represent ideals and set standards for the rest of the debauched passel. Among the pilgrims is a student, a Clerk, a character that, Chaucer feels, portrays the archetype of the dedicated student. The Clerk is unconcerned with material ossessions or a worldly appearance, he is fiercely dedicated to learning and study, as well as soft-spoken, speaking only what and when it is relevant and necessary.

Don't use plagiarized sources. Get your custom essay on
“ Character Analysis: The Clerk In Geoffrey Chaucer’s The Canterbury Tales ”
Get custom paper
NEW! smart matching with writer

In the general prologue the portrait of the Clerk fiercely contrasts that of the Merchant (Rossignol, ).

The Merchant’s opulence and acquisitiveness allow one to more ably notice the Clerk’s poverty and devotion to “enriching his mind rather than his pocketbook” (Rossignol, ). The Clerk is introduced by mention of the near-emaciated thinness of both he and his horse.

His clothing was threadbare and his face was gaunt (Chaucer, Prologue to The Canterbury Tales).

The Clerk’s appearance gives tangible evidence of where his priorities lay (Rossignol, ). For the humble Clerk, learning is his Panzarella 2 main priority. He spends his every penny on books and learning and diligently prays for the souls of those who give aid in funding his devotions. Dedication is a significant facet of the Oxford Clerk’s character. With his work and studies he took the “utmost care and heed” (Chaucer, Prologue to The Canterbury Tales).

In the General Prologue to The Canterbury Tales it mentions that he had been studying for a lengthy period of time, they mention as well that he both learned and taught gladly, this suggests that he is no longer an undergraduate student, but a graduate student working towards his M. A. (Rossignol, ). The mere fact that the poor Clerk finished his undergraduate studies and continued to work toward his Master Degree is testament enough to his dedication without the mention of his eagerness to both learn and teach.

In The Clerk’s Prologue the host to the motley crew of pilgrims made mention that the clerk need not study there, and made mention that he had not heard the student speak at all that day (Litrix, The Clerk’s Prologue). The Clerk’s silence is mentioned repeatedly throughout The Canterbury Tales. Chaucer, the narrator, writes of how the Clerk said no more than what needed to be said, and that even that was said “in fullest reverence” (Chaucer, Prologue to The Canterbury Tales).

The Host remarks later that the Clerk “rides as quiet and still as is a maid” (Litrix, The Clerk’s Prologue). When he is beginning to tell his story he himself remarks on his worry that the tale may not be relevant, and thus he is reluctant to tell it (Litrix, The Clerk’s Prologue). The tale the clerk tells is about virtue and dedication which gives one an idea of where his values lay (Rossignol, ). Panzarella 3

The Clerk of Geoffrey Chaucer’s The Canterbury Tales represents Chaucer’s ideal student, but while many may disagree with one or two aspects of the Clerk’s character, Chaucer brilliantly portrayed him as a self-effacing, admirably dedicated student, whose words are all the more regarded and respected for their infrequence. Where or, more importantly, from whom Chaucer received inspiration for the Clerk, or any of his other fellow pilgrims, one could only guess, perhaps from his family or close friends or just perhaps they were created from what Chaucer felt were his own virtues and shortcomings. 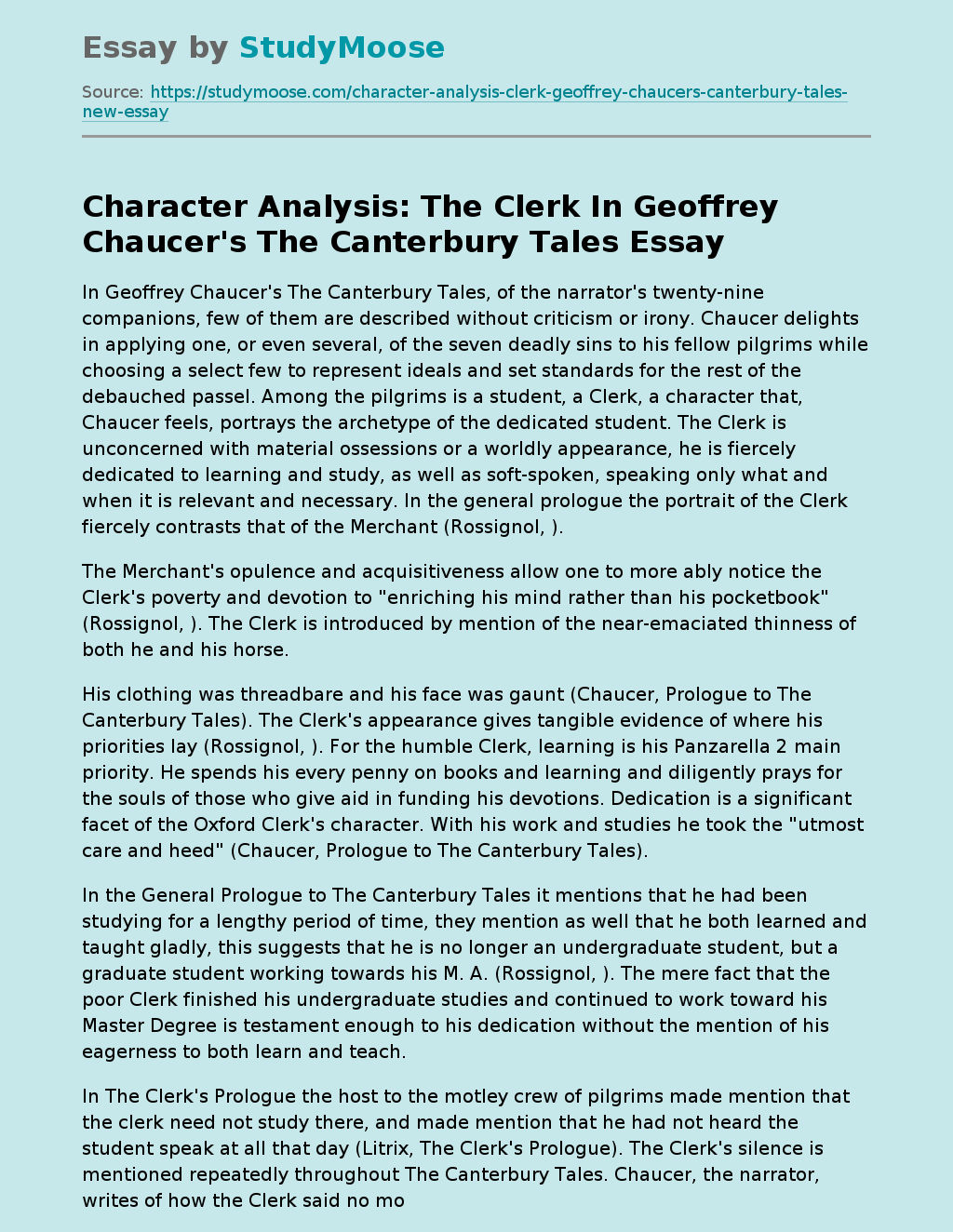