Criticism of the Church in the Canterbury Tales

The Canterbury Tales, a collection of tales by Geoffrey Chaucer, was written in Middle English at the end of the 14th century (Encyclopaedia Britannica, 2011). It is considered to be the best work of literature in English in the Middle Ages (Johnston, 1998). Chaucer uses literary devices as no one had ever done. In addition, he chose to use English instead of Latin. This masterpiece is structured in a similar way as Bocaccio’s Decameron. The tales are organized within a frame narrative (Encyclopaedia Britannica, 2011) explained in the General Prologue by the narrator: a group of pilgrims that are going to visit St.

Don't use plagiarized sources. Get your custom essay on
“ Criticism of the Church in the Canterbury Tales ”
Get custom paper
NEW! smart matching with writer

These pilgrims are from different estates of the medieval society: nobility, the church and peasantry (The Norton Anthology, 1993: 76). Through the characters, Chaucer reveals some aspects of the society he lived in. In other words, instead of creating typical role models, the characters are exaggerated individuals very different from the prototypical idea. The author uses hyperbolic characters and irony to create humour and criticism.

For example, the knight is not the typical medieval soldier the reader would expect. He avoids conflict being a very romantic person.

In a similar way, the characters that are part of the Church are also very peculiar. At the time when Chaucer wrote this poem, the Catholic Church was very powerful and rich. The clergy enjoyed great fortunes and a high quality of life compared with the peasantry who was starving and dying. In this essay, I’m going to deal with the criticism towards the Catholic Church analysing the ironic portrays of the Prioress, the Monk, the Friar and the Pardoner.

Chaucer begins writing about the hypocrisy of the church in the General Prologue when the Prioress is introduced.

The Prioress is a nun with very good manners (e. g. she wipes her lips before drinking, lines 133-134) that behaves as if she were a lady of the court (e. g. she speaks French but with a very bad accent, lines 124-125). The Prioress is also very romantic as we can see in her brooch and her motto: “Amor vincit omnia” -“Love conquest all”- (Dr. Melillo, 1996). She is also very kind and sensitive. For instance, she cries when a mouse falls in a trap and feeds her dogs meat so they do not starve. This image of nice person contrasts with the reality of the time.

If her words and actions are analyzed, the audience can understand that this was not the typical behavior of a nun. She is more worried about her pets than the commoners who actually did starve and rarely ate meat. The narrator is portraying her as a very naive person in a very nice tone that hides the irony. Nevertheless, the audience was aware that she is not fulfilling the aim of the Church: take care of people (The Norton Anthology, 1993:76). The Monk is the following pilgrim described in the General Prologue. According to his description he is very interested in hunting and in horses (line 166).

A monk should not be riding and hunting but obeying, praying, copying and studying. In addition, the Monk is fully aware that his order does not allow these practices and he admits that he does not follow the rules of his order (Jokinen, 2010) (lines 174-175). When the portrait of the Monk finishes in the General Prologue, the man described is bald, fat and well-dressed. Any person in that time that heard this description would immediately think about a lord not a monk. Although the narrator likes the life style of the Monk and his description is not very acid, we can see how Chaucer is criticizing some monk’s lives.

Monks are supposed to be obedient and to embrace vow of poverty not to reject rules and live the life they want. After analyzing two characters against who the narrator does not show great rejection, I am going to analyze the Friar and the Pardoner who the narrator describes in a very ironic and bitter tone. A friar is a roaming priest that begs for living whose goal is to help beggars and lepers selflessly. On the contrary, this friar really detests this kind of action because he does not get any benefice from it (lines 242-247). He likes to enjoy life and pleasures.

He shows that he is not like a normal friar implying that he is above (lines 210-211) like an aristocrat (Knapp, 1999). In this sense, he acts like the Prioress does, pretending not to be who he really is, a beggar. The reader also knows that he accepts bribes and gives easy penance for extra donations so he can live better. He justifies his conduct explaining that giving money is a sign of repentance. Nevertheless, the Friar, as the Monk, is supposed to have done the vow of poverty. Contradicting any preconceived ideas the reader may have about friars, he has a good quality life thanks to keeping the money he should give his order nd receiving extra incomes.

In the description of the character, the audience understood how Chaucer is condemning the abuses of the Church by creating a person who does not follow any of the prototypical characteristics of a good Christian friar. Finally, I am going to explain in detail the character of the Pardoner. The Pardoner resembles the Friar in the fact that both get money from people (with a religious reason behind) for a living and keep it for themselves. However, there are some differences: the Pardoner is not part of an order whereas the Friar is; and he does not believe in what he does either while the Friar justifies it.

The Pardoner is considered the most hypocrite character of all because he embodies all the sins he preaches against. He sells papal indulgences in exchange of donation that he keeps for himself showing avarice (lines 389-391). In addition, he admits that he does not feel guilty and that the relics he sells are a fraud. Furthermore, he tells the other pilgrims his tricks implying that he lies and manipulates people to get money. Ironically, after he has admitted that he is a liar, the Pardoner gives a kind of sermon against gluttony, drunkenness, gambling and swearing.

Moreover, his tale can be considered an exemplum (Patterson, 1976) that warns against avarice and drunkenness. He gives an instance of the kind of person he is when he tries to sell one of his relics to the Host even when he has already told them they are forged and useless. Apart from being described as, what we would call now, a con artist and a sinful person, there are allusions to his condition of homosexual and eunuch (Jokinen, 1998). All these characteristics make him appear in the margins of society. As I said before, this character is the one that better represents the hypocrisy that Chaucer shows in this work.

As I said, he represents all the sins he preaches against: he drinks (his finishes his drink before stating the tale); he lies (about his relics, line 394), and he is greedy (he keeps the money, line 409). Through this character, the author shows a very sinful and corrupt church away from their goal. To conclude, Chaucer shows a very hypocrite and selfish members of the Church in The Canterbury Tales. In the 14th century, the Catholic Church was very influential and religion was present in everyday life. The purpose of the Church was supposed to be the caring of the people.

Nonetheless, the characters in this poem do not worry about anything else that themselves and their actions are directed always to their own benefit. Through their words and actions described ironically by the narrator, the characters reflect their sins and their corruption and by extension, the sins and corruption of the Church. It can be concluded that in The Canterbury Tales, Chaucer makes a social criticism showing the dishonesty of the Church. However, it should be pointed out that the characters are an exaggerated version of the original people because the main aim of this work is to be enjoyable for the audience.

Criticism of the Church in the Canterbury Tales. (2017, Jan 09). Retrieved from http://studymoose.com/criticism-of-the-church-in-the-canterbury-tales-essay 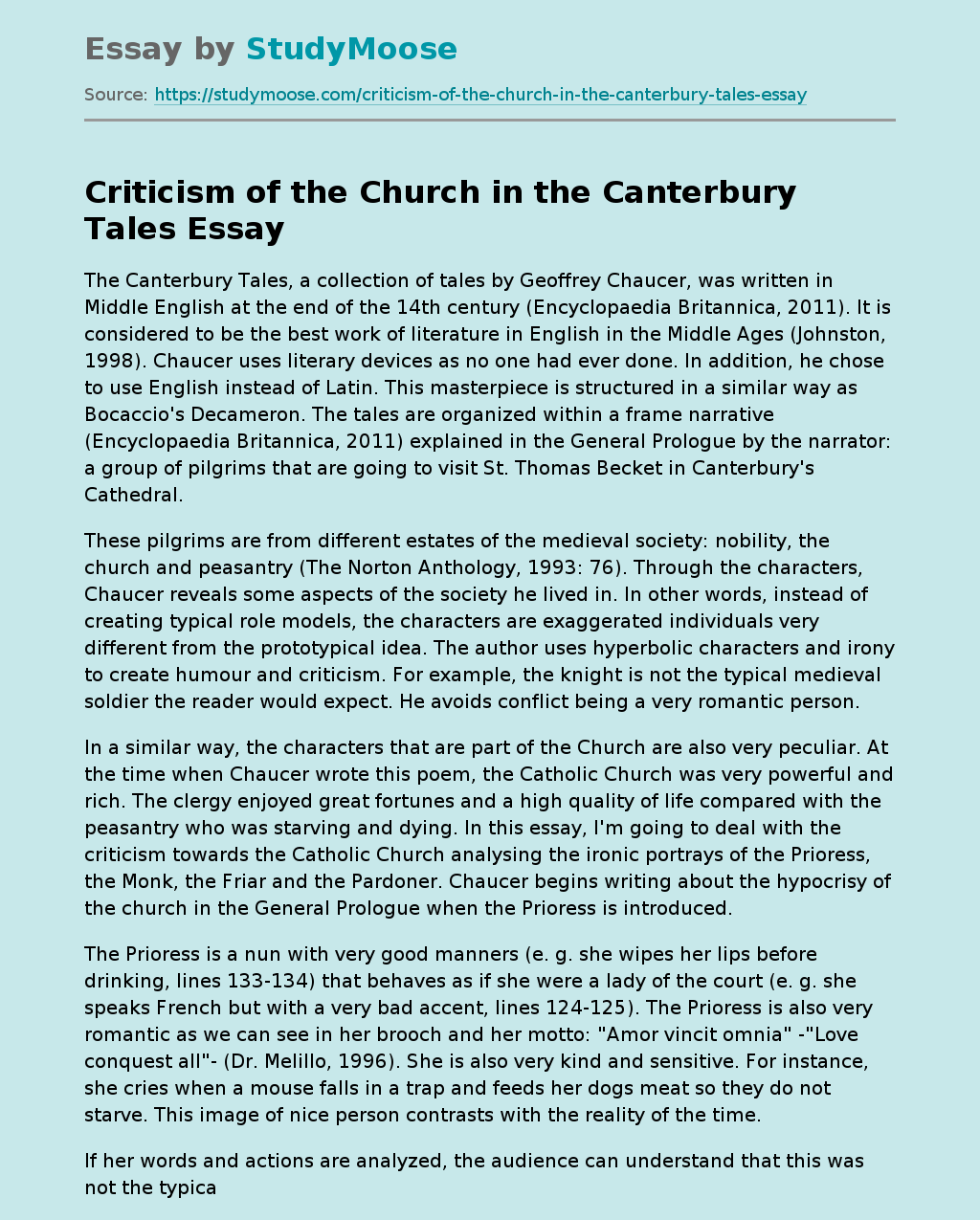