Christian Comparison in "The Canterbury Tales"

The Canterbury Tales, written by Geoffrey Chaucer is a book of short stories told by pilgrims as they journey to Saint Thomas Becket’s shrine after his death in the 14th century. These pilgrims tell each other stories to keep themselves entertained as they travel. Though their plots and themes vary from romance to tragedy, the theme of religion also made its way into many of the tales. Choosing three, “The Tale of Melibee”, “The Monk’s Tale” and “The Man of Law’s Tale” and comparing the disposition of the storyteller to the characters and circumstance in their tale, perhaps there is more to learn about their underlying feelings regarding Christianity.

Don't use plagiarized sources. Get your custom essay on
“ Christian Comparison in “The Canterbury Tales” ”
Get custom paper
NEW! smart matching with writer

“The Tale of Melibee” is a story of tragedy and forgiveness amidst a wealthy family. While Melibus has gone on a walk, his wife Prudence and their daughter Sophie are attacked and beaten in their home by three old enemies. When He returns home and sees their physical state he is furious and desires revenge.

Prudence though harmed by the attack, quotes the scriptures to him, pleads that he seek wise counsel, and forgives. He listens to her and does just this. Proverbs 24:6 says, “For by wise guidance you can wage your war, and in abundance of counselors there is victory.” Prudence’s reaction after the incident is extremely wise and biblical. Turning to the scriptures during pain and brokenness rather than lashing out takes a lot of patience and faith. Chaucer named her appropriately, for Prudence means wisdom and virtue.

Unlike the other 20 tales, this story is told by Chaucer rather than a pilgrim. Chaucer is medieval England’s best storyteller. Though he wrote on religion, he is not known to be religious himself. In this tale, Chaucer brings to light the positive elements of Christianity, rather than the corrupt views of the church that are in several of his stories.

“The Monk’s Tale” is told by the Monk. His tale is not just one, but many brief versions of well-known stories including those of Lucifer, Adam, Samson, Hercules, Nebuchadnezzar. The Monk tells 19 of these stories, the moral of the stories being that fortune is unpredictable, and even the most wealthy, strong or powerful can lose to it. The Monk could have kept on spitting out these stories if he hadn’t been interrupted by the Knight, who had heard quite enough. The Monk, the pilgrim storyteller is a jolly, greasy, wealthy and round looking man. He rides on horseback, keeps expensive animals, and hunts. He wears expensive clothes and lives in a way that conflicts with the typical monk lifestyle. Monks in the medieval period lived very minimalistically and devoted themselves to reading, prayer and work in the church. This Monk enjoyed the title and respect that came with being a monk, but did not live accordingly.

“The Man of Law’s Tale” is the story of Constance, a devout Roman Christian woman that is faced with trials, but is saved by her faith. Constance’s father, the Roman Emperor makes a contract with King Alla that he will convert to Christianity. This infuriates Alla’s mother so much so that she attacks their wedding party and sends Constance away on the sea. During her exile, Constance faces many trials and sees many miracles happen because of her faith. Deuteronomy 20:4 says, “For the LORD your God is He who goes with you, to fight for you against your enemies, to save you.” This verse rings true in Constance’s story. She remains strong and does not question God’s goodness even amidst the situations she was in. She is an example of true faith when put to the test. The storyteller, is the Man of Law, or lawyer. He is a respectable man that follows rules and does his job well. He is smart and has a lot of money. It’s possible that his reasoning for telling a tale like this is to show how devotion and perseverance is worth it.

Of the many stories the canterbury tales hold, Christianity is an undeniable theme in almost every one. Though Chaucer was not openly a Christian, he thought it important to share thoughts on the topic through story. Writers write to teach lessons, express their opinions and help you form your own. The Canterbury tales, though crude and dark at times has great stories with even better messages. In conclusion, by comparing these three tales and their tellers, there is a clearer visual of the motives and purpose of their place in the story.

Christian Comparison in "The Canterbury Tales". (2021, Apr 01). Retrieved from http://studymoose.com/christian-comparison-in-the-canterbury-tales-essay 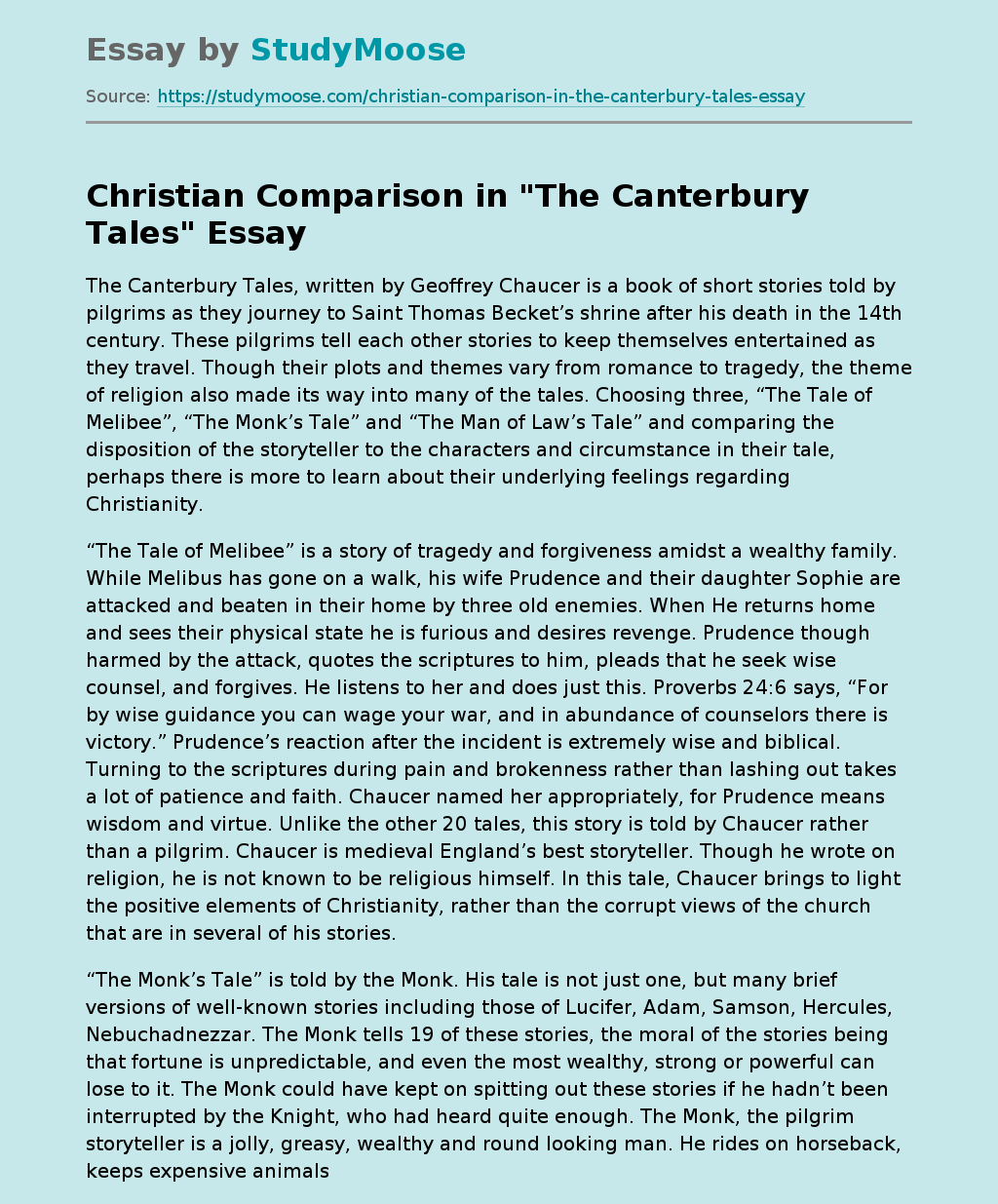