The Role of the Prioress

In The Canterbury Tales Prologue, Geoffrey Chaucer introduces many characters that play a significant role in the Medieval society. While some characters represent their position well, many do not follow certain rules and codes that are required by their occupation. Specifically, the nunnery requires a prioress to follow many vows, wear certain clothing, and perform various religious acts. Chaucer describes certain manners and habits of the Prioress, Madame Eglantyne, in order to show her non-fulfillment of these requirements. In order to fully understand her, the readers must know the reasons that women entered nunneries, the duties of a prioress, and the forbidden luxuries.

The economic background of the nuns remained the same, but the reasons for entering the nunneries differed. While some nuns belonged to low economic families, most came from wealthy families because “many convents and nunneries only accepted postulants who were from wealthy backgrounds” (“Medieval Nuns”).

Nuns drawn from a lower class usually failed to become a nun due to their lack of education (Power 14).

Nunneries required women to study Latin because the bishop addressed communications, notices of visitation, mandates and injunctions in Latin (Power 246). Some nuns also spoke French, the language of the wealthy (Power 246). Madame Eglantyne fell into this category. While the church did not require the knowledge of French, the nuns from wealthy backgrounds found it “hard to change the way of life, which they led before they took the veil and which they saw all around them…” (Power 74). Therefore, these women learned French to feel wealthy or socially accepted.

On the other hand, Madame Eglantyne represented the exception. She “[counterfeited] a courtly kind of grace” so the other nuns would assume her family possessed wealth (Chaucer line 137). She strived to fit in not only with the other nuns, but with the other well-born women of that time. Women entered nunneries for various reasons. Devotion to god acted as only a small focus of their reasoning (Power 29).

Instead, families often placed them into the nunnery (“Medieval Nuns”). The nunnery acted as a prison because their families “wished to be rid of them” (Power 25). Women like this often remained as a nun forever without hope of leaving (Power 34). If a woman joined out of choice, three main reasons motivated them. The majority of women joined as a career simply because of the absence of other options (Power 29). Also, the nunnery acted as an alternative to marriage or a place of peace for the widowed (Power 25). Women either did not want to marry or their family could not afford the price of a marriage (Power 25). Lastly, women chose the nun life due to the Cult of the Virgin (“Medieval Nuns”). “During the Medieval times of the Middle Ages, the belief, fostered by St. Augustine was that every person was born guilty of the original sin”, and because Eve committed the original sin, men disrespected and blamed women (“Medieval Nuns”). Pursuing the life of a nun demanded some considerable respect. Due to the wide variety of reasons for entering a nunnery, Chaucer does not provide enough information to explain why Madame Eglantyne did. But, the historians do conclude that most nuns came from the upper class. A nunnery required many duties from a prioress.

The daily life of a nun developed from three vows: the Vow of Poverty, the Vow of Chastity, and the Vow of Obedience (“Medieval Nuns”). Chastity “enables a nun to give her whole love to God alone”, poverty creates a life of humbleness, and obedience allows for a life completely devoted to God (Broadley). The vows reflect the life of Christ because he led a life of these values (Broadley). The Prioress in The Canterbury Tales Prologue seems to follow only one of these vows. Her accessories such as her golden brooch show her failure in following the Vow of Poverty (Chaucer 158). Also, “Amor vincit omnia” was engraved on her brooch which shows her secular love instead of spiritual love (Chaucer 160). This shows her lack of following the Vow of Chastity. Along with the vows, the prioress had many duties. She was held responsible for “managing internal affairs of her Abbey as well as of contacts with the outside”, discipling, and organizing the convent (Zatta). The nunnery offered her much freedom. But, this liberty led to many temptations (Power 59). First, luxury and independence tempted many (Power 60).

Some also were tempted to “rule like an autocrat, instead of consulting [their] sisters” (Power 60). For an example, many complained that the prioress kept the common seal in her own custody (Power 64). Lastly, the rules forbid her to express favoritism (Power 60). Often, the prioress invited nuns to dine with her (Power 61). A group accompanies her on trips due to the unfitness of traveling alone, but obviously Madame Eglantyne did not follow this trend. (Zatta). She most likely absented herself because of the briefness of the journey (Zatta). Even though Chaucer excludes a lot of information about her duties, clearly, the Prioress fails to follow some regulations. Because most women came from wealthy families, they often indulged in many luxuries (“Medieval Nuns”). Due to the Vow of Chastity, a prioress wore specific modest clothing (Power 587). For an example, “They were not to wear gowns of black wide at the bottom, or turned back with fur at the wrists, and they were in no wise to use wide girdles or belts plaited or adorned with silver, nor wear these above their tunics open to the gaze of man” (Power 587).

Furthermore, they forbid the wearing of expensive jewelry (Power 587). Madame Eglantyne adorns herself with “a coral trinket on her arm, a set of beads, the gaudies tricked in green, [and] whence hung a golden brooch of brightest sheen” (Chaucer 156-158). She tries to imitate the clothing and manners of the secular women. Her table manners support this theory and “if Chaucer had not told us whom he was describing, we might never have known she was a nun” (Power 9). As one can see, while many believe the Prioress acted in a secular manner in order to fit in with the other nuns, others consider the possibility that she “[came] from a prosperous family, perhaps an aristocratic family with several daughters that would have made it unlikely for her to marry” (Zatta). Pets also continued to raise issues in the nunneries because the fondness for them remained difficult to stop and it caused visitors to indulge in them (Power 308). So the Prioress’s lapdogs represent a common luxury for most nuns, but the church looked down upon them (Power 308). In the nunneries, all items were provided equally for everybody (Power 315).

All food was cooked in a common kitchen and clothing was provided from common goods (Power 315). It was essential that they lived commonly and owned no private property (Power 315). The Vow of Poverty enforced this life without secularity. Although, most moral standards declined and nuns “became more carless about keeping the services” (“Medieval Nuns”). In conclusion, The Canterbury Tales Prologue introduces many characters who did not fulfill their role in the Medieval society. Madame Eglantyne lacks the devotion and faith required by the nunneries. The secular world distracts her from the life of a prioress. She focuses on her manners, animals, and clothing more than her duties to the poor and God. While she may have good faith, the readers view her more as a secular woman than a spiritual one. Chaucer uses the Prioress to support his notion that most religious figures during the Medieval ages lived corruptly and secularly.

The Role of the Prioress. (2016, Aug 12). Retrieved from https://studymoose.com/the-role-of-the-prioress-essay 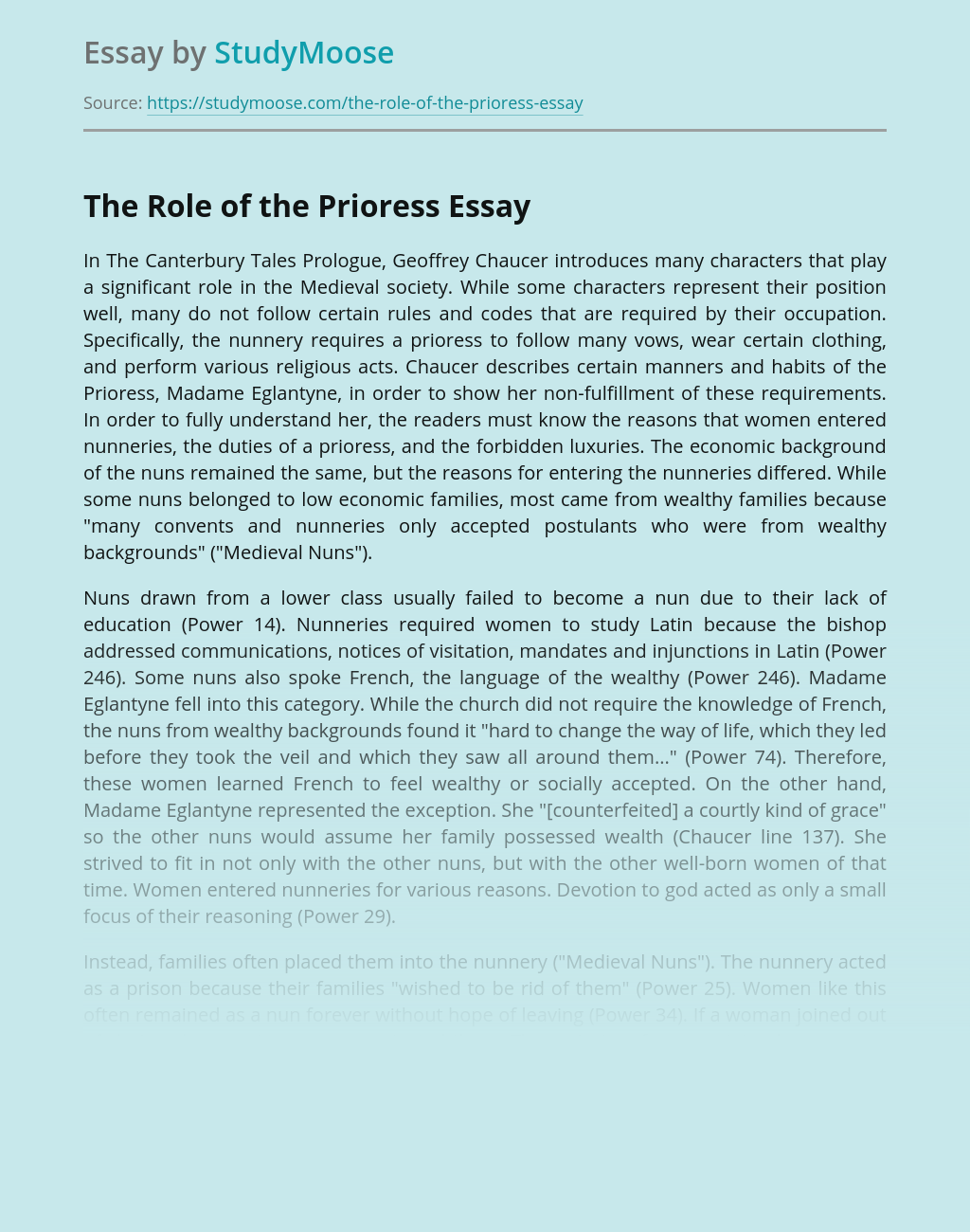 Get Essay
The Ramayana: A Story of Abduction

In Morphology of the Folktale, Vladimir Propp proposes thirty-one functions that make up all Russian fairytales. Propp’s Formalist approach to analyzing folktales can be extended beyond stories of the Russian tradition and even beyond fairytales. Proppian analysis of the Hindu epic, The Ramayana, reveals that the story is driven forth by function eight whereby “the...

The Wizard of Oz as a Fairy Tale

For hundreds of years, parents have been enthralling children with stories of magic and wishes coming true. Fairy tales are passed from one generation to the next through oral tradition, and, in modern times, books. As various societies develop, fairy tales are changed to fit the needs and morals those societies want to impress upon...

The Canterbury Tales begins with the introduction of each of the pilgrims making their journey to Canterbury to the shrine of Thomas a Becket. These pilgrims include a Knight, his son the Squire, the Knight’s Yeoman, a Prioress, a Second Nun, a Monk, a Friar, a Merchant, a Clerk, a Man of Law, a Franklin,...

The story of Little Red Riding Hood has been around for years. Throughout the years this story has been told many different ways. The story began as a folk tale that European mothers and nurses told to young children. The fable soon came to the attention of Charles Perrault (1628-1703). He was a French attorney...

Yolen enlightens and inspires responders through the use of structure, language and other techniques. The novel Briar Rose by Jane Yolen is a heart wrenching story of sleeping beauty intertwined with the horrors of the Jewish Holocaust. The structure of the novel is altered in a way to interweave three stories including Gemma’s Briar Rose...

Chaucer uses conventions of courtly love throughout the Canterbury Tales, and The Merchant’s Tale is no exception. As an elaborate code of conduct governing the actions and relations of aristocratic lovers in the 14th century, it is described satirically by Chaucer, who perhaps thought of the whole process as farcical. As well as Januarie being...