"The Miller's Tale" and "The Reeve's Tale"

Don't use plagiarized sources. Get your custom essay on
“ “The Miller’s Tale” and “The Reeve’s Tale” ”
Get custom paper
NEW! smart matching with writer

Both “The Reeve’s Tale” and “The Miller’s Tale” possess the common topic of lust. Both these fabliaux manifest their narrator’s motive for reciting these tales. Nevertheless, the clear victor between the conflict of the reeve and the Miller would obviously be the Reeve.

The narrator explains, “He was a thief as well of corn and meal, and sly at that; his habit was to steal” (109). Simpkin is a notorious brute who is married to a daughter of a parson. They have a 20 year old daughter named Molly and an infant. The Miller planned to steal meal from the two students, Alan and John. Knowing of the Miller’s trick, they planned to take revenge by fornicating with the Miller’s daughter and wife.

The Miller’s Tale is different in the sense that the narrator speaks of an old carpenter as being gullible and unaware of his surroundings. The Miller marries a young woman, who ends up being seduced by a young man named Nicholas. The narrator explains, “Now, gentlemen, this gallant Nicholas one day began to romp and make a pass at this young woman, in a mood of play, her husband being out, down Osney way. Students are sly, and giving way to whim he made a grab a caught her by the quim” (91).

The narrator says, “On hearing which the miller robbed him more a hundred times than he had robbed before; for up till then he’d only robbed politely, but now he stole outrageously, forthrightly” (110). In “The Reeve’s Tale”, Alan and John exact their revenge on the Miller by deceiving him and causing the Miller physical pain. In “The Miller’s Tale” Alison deceives Absolon. The narrator explains, “And at the window out she put her hole, and Absolon, so fortune framed the farce, put up his mouth and kissed her naked arse…” (103). Alison led Absalon to believe he was about to receive a kiss, but she tricked him into kissing her naked butt in shame.

The theme of revenge is evident throughout both of these tales. In “The Reeve’s Tale,” Alan and John take revenge on the miller by sleeping with his daughter and wife. Alan exclaims to John, “But never ye mind, all shall be for the best; I tell ye, John, as sure as I’m a man I’m going to have that wrench there, if I can! The laws grants easement when things gan amiss…” (115). In “The Miller’s Tale” Alison seeks to take revenge on her husband for being too jealous. Alison says to Nicholas, “My husband is so full of jealousy, unless you watch your step and hold your breath I know for certain it will be my death, she said, ‘So keep it well under your hat'” (91). Always hoping for an opportunity to spite her husband, Alison gives into Nicholas’ desires.

The Miller in “The Reeve’s Tale” is a very sinful and wicked man. He is a dishonest thief whose wife is the daughter of a clergyman. Since clergymen are prohibited from marriage and sex, she is therefore an illegitimate baby. The narrator says, “And her birth was smirched to say the least; being the daughter of a celibate priest…” (109). “The Reeve’s Tale” greatly involves the sins of violence, adultery, and thievery. However, “The Miller’s Tale” concentrates more on the gullibility and ignorance of the carpenter. The carpenter of “The Miller’s Tale” is an old man, who is easily deceived due to his gullibility. Nicholas reassures Alison, “A scholar doesn’t have to stir his wits so much to trick a carpenter” (91). The reeve in “The Miller’s Tale” can be described as merely a naïve old man rather than a sinner like the miller in “The Reeve’s Tale”.

The theme of lust is noted throughout both tales. In “The Reeve’s Tale”, the two students, Alan and John, had sex with the Miller’s daughter and wife. The narrator describes, “Alan rose up; towards the wench he crept. The wench lay flat upon her back and slept, and ere she saw him, he had drawn so nigh it was too late for her to cry. To put it briefly, they were soon at one” (115). The two lustful students acted on their desire for revenge on the Miller. In “The Miller’s Tale”, Nicholas’s love for Alison is lustful, whereas Absolon has an idealistic and romantic love for Alison. Nicholas sees Alison in more of a sexual and physical way, rather than in a romantic manner. Nicholas says to Alison, “Where are your manners? Take away your paws!” Then Nicholas began to plead his cause” (91). Even after Alison refused Nicholas’ attempts to seduce her, he still persisted, manifesting his lust for Alison.

The drunk and belligerent Robin offers to follow up “The Knight’s Tale” with a tale of his own. The host eventually allows Robin to tell his tale, yet Oswald objects this decision. Robin verbally attacks Oswald with this tale, and infuriates him. The Reeve shouts “Shut your trap! Giver over with your drunken harlotry. It is a sin and foolishness, said he, To slander any man or bring scandal on wives in general.

Why can’t you handle some other tale” (87)? In reply to this “slap in the face”, Oswald stands and gives a tale of his own. He counterattacks and gives an even more vulgar and heinous tale slandering Robin in spite. Oswald says, “I’ll pay him back before I’ve done in his own filthy words, you may expec. I hope to God he breaks his bloody neck. He sees the mote in my eye, if there is un, but cannot see the beam there in his’n” (108). This entire dispute is caused over spite.

The drunken Robin, in one’s opinion, was defeated by Oswald in this battle of wits. They both used poetic violence to silence each other, yet Oswald seemed to have the advantage of sobriety on his side. In the end, the dispute solved nothing.

– The Canterbury Tales, by Geoffrey Chaucer

"The Miller's Tale" and "The Reeve's Tale". (2016, Jul 27). Retrieved from https://studymoose.com/the-millers-tale-and-the-reeves-tale-essay 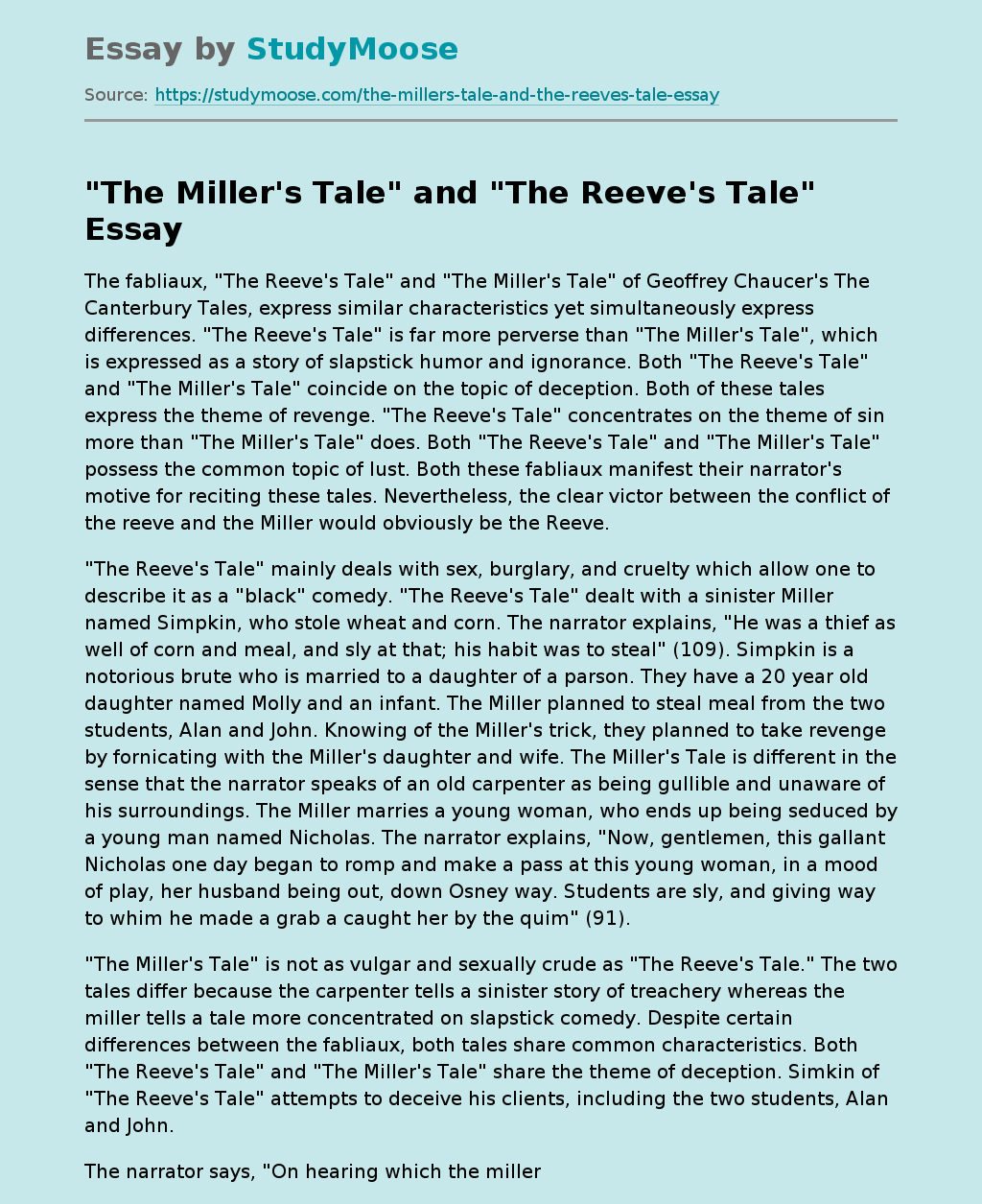