Canterbury tales: The Wife of Bath and the Pardoner

Don't use plagiarized sources.
Get Your Custom Essay on Canterbury tales: The Wife of Bath and the Pardoner Just from $13,9/Page

In the Canterbury tales the autthor makes sure that you know that there are alot more differences than there are similarities. For example the Wife of Bath and the Pardoner, they are very different stories but the author seems to tie in their similarities and differences.

In the Wife of Bath and in the Pardoner there are many similariries and differences between the two tales. In the tales one of the similarities is that they both have experienced the world. There is one difference between them just in traveling around the world because the Wife of Bath experienced the world by traveling and also in a sexual sense. She goes on for a while in her tale about how she would be the best person to talk about marriage and how you can make it work, or how it wont work.

And she states that she ahs the right to say this because she has been married fiive times, and she knows what will and wont work in a marriage. One of the big reasons that she said all of this is so that she can destroy the idea that men are the dominate species and they have a strong power over women, and that if women are given everything that they need, want, and desire, then thhey will be willing to do anything that their husbands want and they will be faithful to them always.

While these stories are exptremly different in what they are talking about there are still a few things that they have in common. The Pardoner is all about the journey to canterbury and how they decidd to make the journey a little more bearable so they decided to have a story telling contest. So they decided have each of the men tell a story on their way to canterbury and on their way back and the Inn keeper will decide on the winner. Except for the fact that they never got to finsh their stories on the way back becase the Pardoner dies and their is never a clear winner.

Sometimes the author wants you to be able to notice the similarites and differences within a peice of fiction. Sometimes it is hidden but other times, such as in this case they are very obvious.

Canterbury tales: The Wife of Bath and the Pardoner. (2016, Mar 25). Retrieved from https://studymoose.com/canterbury-tales-the-wife-of-bath-and-the-pardoner-essay 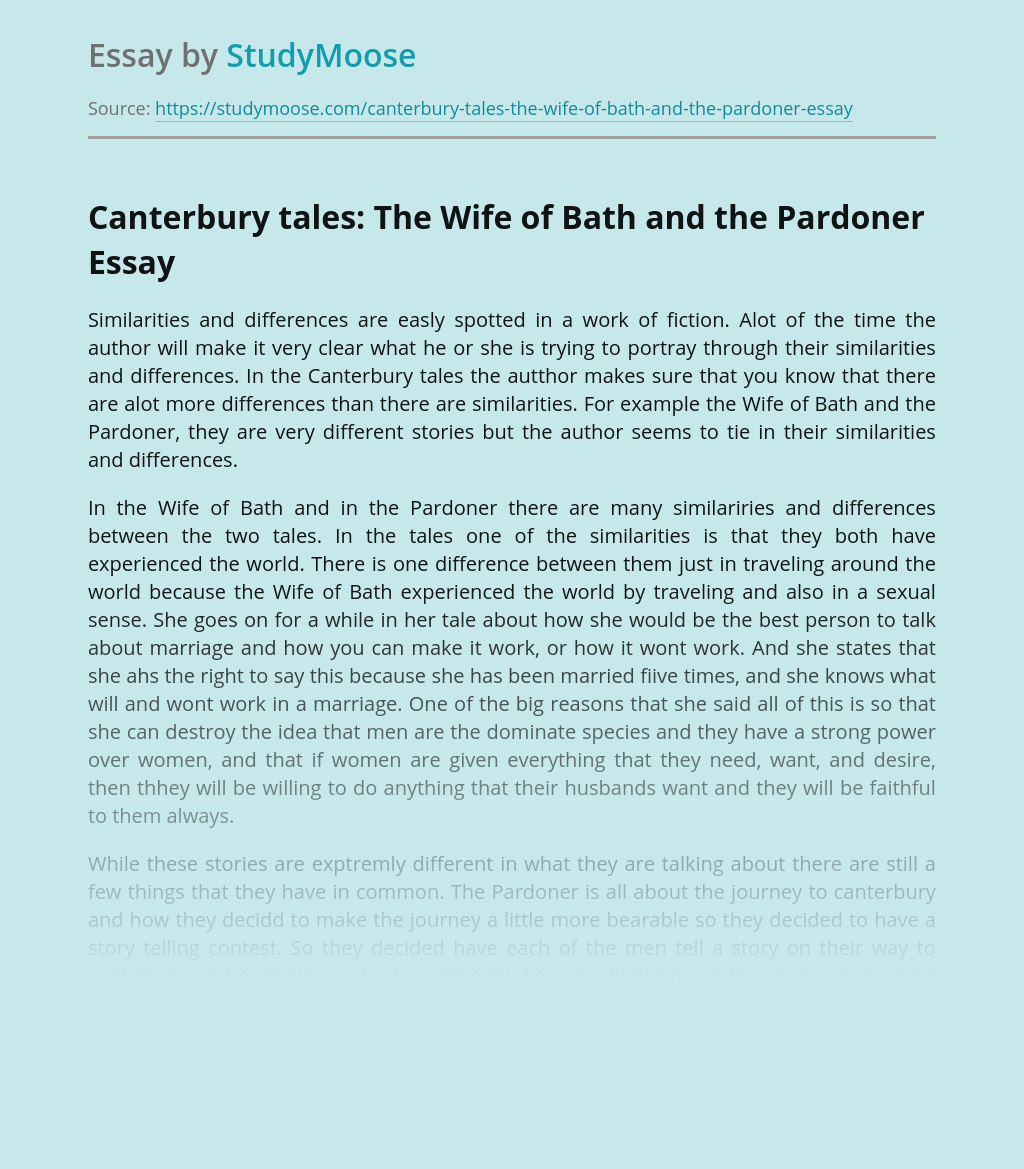 The general topic of forgiveness has received a magnitude of attention and research on a conceptual level in recent years. Hall and Fincham consistently noted, however, that self-forgiveness had little to no empirical study or research documented and believe this is a critical piece to an individual’s overall emotional health. In an effort to stimulate...

"Catcher in the Rye" and "Rebel without a cause"

When one both reads Catcher in the Rye and sees Rebel Without a Cause, he or she can’t help but wonder if the writers, Nicholas Ray and J.D. Salinger, somehow knew each other, or if one writer copied the ideas of the other. Jim Stark and Holden Caulfield, the two main characters of the stories,...

Sometimes, I think about where my own future house should be; in a city or in a village. I like to live in the two areas because they have many different interesting aspects. Therefore, I can’t make up my mind. After I compare the air, the technology and the schools of the two areas, I...

To Kill A Mockingbird Characters

Jeremy Atticus Finch, also known as Jem, is a boy of 13 in the classic novel, To Kill a Mockingbird. He is a curious and mature young man, who has to learn a few lessons along the way. Lizabeth is a young girl who lives in a poverty struck family, in the short story, Marigolds....