“The Feminine” in Dante’s The Inferno

Like many great authors throughout time, Dante Alighieri demonstrates the underlying significance of female characters in his epic, The Inferno. Due to the misconceptions men had of women during this era, women were granted much less societal acceptance and were easily labelled as seductresses. More so, Beatrice’s character suggests a much deeper relationship to Dante – one more than plain, physical love. In this sense, the women in this poem partake in two very distinct roles: either the divine love Beatrice represents, or the sinful female inhabitants of the Underworld in whom Dante sympathizes with.

Don't use plagiarized sources. Get your custom essay on
“ “The Feminine” in Dante’s The Inferno ”
Get custom paper
NEW! smart matching with writer

Women’s sins, as depicted by Dante, tend to be overwhelmingly sexual in nature as compared to men’s. Hell is divided into seven circles, according to the seriousness of the sins. Thus the first, Limbo, is the least blame-worthy, and the second, where the lustful are tormented, is also relatively mild. This moral structure gives us insight into the relative gravity of different sins in Dante’s mind.

As we see here, carnal sins are relatively unimportant, and lust, which is so closely linked with love, is viewed with a great deal of compassion. One should note the relative abundance of female sinners here.

Semiramis, Queen of Assyria, is supposed to have legalized all sorts of sexual immorality, including incest. Cleopatra committed suicide after the defeat of her lover Mark Antony. Helen’s beauty started the Trojan War when Paris desired her. Tristan was a knight who drank a love potion and fell in love with Isolde, the wife of his king.

Dido committed suicide after she was abandoned by Aeneas. In medieval Christian thought, lust was often closely associated with women. A priest who felt himself tempted by the flesh might commonly associate the object of his desire with the desire itself: if men are tempted, women are seductresses. Dante’s inclusion of many women in this circle is, however, a very mild form of this kind of prejudice. The very fact that these crimes are made mainly by women obviously depict the sexism within this epic. However, contrary to what most men would have done, Dante empathizes with them and their wrongdoings. In one particular case he encounters Francesca, who tells Dante the story of her love affair with Paolo, her husband’s brother, for which they are now both condemned to the tempest of the Second Circle of Hell.

The historical identities of Francesca and her lover are well known. Francesca da Rimini was married to Gianciotto Malatesta for political reasons. She unfortunately fell in love with her husband’s younger brother Paolo, and he with her. When her husband discovered their adultery, probably in 1285, he killed them both. Dante was then around twenty years old, and must have been profoundly saddened by the tragic affair: consequently their story affects him more deeply than those of more distant historical and literary figures.

The description of their falling in love over a chivalric romance testifies to the power of literature, a feature which probably enticed Dante since he includes it so flagrantly. She tells Dante, “[O]ne day, for pleasure, we read of Lancelot, by love constrained: alone, suspecting nothing, at our leisure . .. And so was he who wrote it; that day we read. . .No further. . .” (v.112–124). Francesca specifically refers to her adulterous deed when saying this, in which Dante does not see as something worth being punished for, but rather to commiserate with. This reaction to Francesca’s story is what differentiates Dante from the norm as he betrays the societal attitude towards women with this sympathy. As Francesca represents a vital aspect of women in The Inferno, so does Dante’s interpretation of Beatrice. Dante’s feminine ideal is such a woman, who is the whole facilitator for The Divine Comedy.

Beatrice represents Divine Love, and it is her concern for Dante that drives her to seek out Virgil to be Dante’s guide through Satan’s Underworld. It is Beatrice who gives Dante the courage to undertake his journey into Hell. Her motive is quite clear: “Love called me here” (ii. 73), she says. She has been sent with the prayers of the Virgin Mary, Saint Lucia and Rachel, who allude to the Holy Trinity. Indeed, Beatrice can be seen as Dante’s own personal savior.

It is through her love that Dante may find the way out of the Dark Woods of Error and into the true path of God’s light. After this initial gathering, Dante will not see Beatrice until the third epic, Paradise. Angelic creatures like Beatrice are not to be found within the confines of Hell. As Beatrice is the feminine ideal, the female inhabitants of Hell can be considered her opposite.

This can be seen in the second circle of Hell: the Realm of the Lustful. Again we see Paolo and Francesca, as they are an excellent example of how Hell’s feminine occupants stray from the divine feminine ideal in Beatrice. While Paolo weeps, Francesca tells the pitiful tale of their love: “Love, which in gentlest hearts will soonest bloom / seized my lover with passion for that sweet body / from which I was torn unshriven to my doom” (v. 97-99). Note how in her tale Francesca concentrates on the physical aspects of love. The love that Beatrice has for Dante is quite the opposite as it is a celestial kind of affection. Francesca’s love for Paolo was purely in vain, and now she and her lover will live side-by-side in the realms of Hell. Since Beatrice’s love for Dante came from sanctity she, like God, both physically and spiritually guide him on his tour. The distinction between Beatrice and the feminine of Hell is not just visible in its human dwellers. Many of the demons of the underworld also embody a counter feminine ideal.

The Erinyes guard a tower near the Gate to Dis. We see Beatrice as a calm symbol of love, but the furies are “hellish and inhumane” (ix.34), with “horned serpents [that grow] from their heads like matted hair” (ix. 37-38). They are so far from the feminine ideal that Dante’s only description of them that identifies them as female is skeptical: “Their limbs and gestures hinted they were women” (ix. 35). The Harpies, kin of the Erinyes, do not even get specified as female by Dante, but have traditionally been represented as such. The Harpies are described in terms that perhaps, are even more hideous than those granted to the Erinyes: Their wings are wide, their feet clawed, their huge bellies covered with feathers, their necks and faces human.

They croak eternally in unnatural trees. The concept of the divine feminine is not just seen in the sinners, but also in those who were sinned against. In the Eighth Circle of Hell there are the seducers and panderers, who are being punished for their crimes against women. Dante speaks with Venedico Caccianemico, who prostituted his sister Ghisola to gain political favor. Virgil also points out Jason, who was Hypsiplye’s seducer and unfaithful husband to Medea. They are forced to walk quickly in a circle, driven by “horned demons with enormous lashes” (xviii. 35).

By taking advantage of these women they rejected the divine femininity and destroyed its purity. In this sense Dante was thinking ahead of his time. Dante lived through the end of the Middle Ages. He saw the very beginning of the Renaissance. During this point in time, women were viewed as temptresses, and frequently received the blame for any acts of adultery. It was not uncommon for an upper-class woman to be used as a sexual bribe either. Chivalry was only introduced during the hype of the Renaissance, which was approximately a couple decades after this epic was written.

Therefore, the way Dante depicted his female characters, and upheld his belief in feminine purity, suggests he had a much more respectful appeal to the ideal of a woman than most men during his time. The last place we see a female in Hell is within the Eighth Circle. She is Thaïs the Flatterer, and she lives in the filth of her own sin. Virgil describes her as “scratching herself with dungy nails, the strumpet who fidgets to her feet, then to a crouch” (xviii. 129-130). Hers was a sin of the intellect, unlike Francesca, whose weakness was one of physical desire.

Through her insincerity, Thaïs rejected the position of the divine female. She had no love, not even a lustful love. Her punishment matched her crime. By cheapening the position of the woman, she sentenced herself to an afterlife of obscenity and decay. As said before, Beatrice is the feminine ideal. The women of Dante’s Hell are judged by her standards. Dante seemingly, yet unusually, treats the women in his poem with respect, especially given his time period. His fascination with Beatrice, and the significance she held for him, influenced how he viewed women, and in turn, as a poet, how he treated the women of Hell.

“The Feminine” in Dante’s The Inferno. (2016, May 05). Retrieved from https://studymoose.com/the-feminine-in-dantes-the-inferno-essay 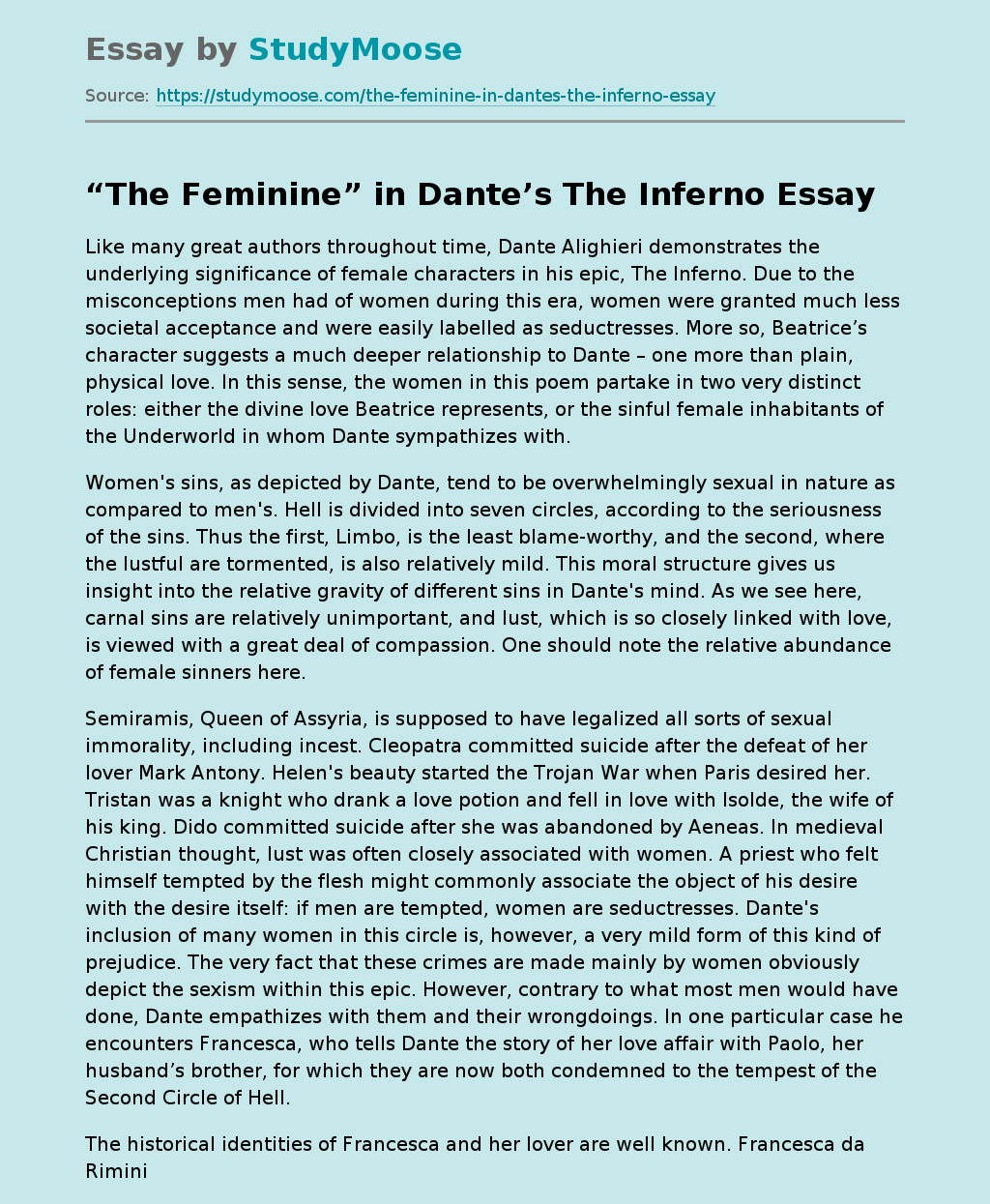