God's Justice in The Inferno by Dante Alighieri

Dante’s Inferno is a very prominent and significant segment of literature work. There are various things one can learn from it, from the in-depth knowledge of the pits of Hell to how God intended us to understand how to live life. This epic story demonstrates how with each action one makes there is a consequence for it, and what you sin from above, you have to deal down under. Readers get to know hell in a whole new aspect. Throughout an incredible journey, we get to see the many different forms of sins, and each with its own distinctive way of suffering.

Don't use plagiarized sources. Get your custom essay on
“ God’s Justice in The Inferno by Dante Alighieri ”
Get custom paper
NEW! smart matching with writer

With each sin committed there is a special kind of punishment, which reflects the type of suffering the unfortunate sinner gets, and in a way it is a retaliation for breaking God’s divine law. In Dante’s Inferno, it argues that one’s punishment, in the form of justice, forces their crimes or sins to ultimately turn back against that sinner.

Dante’s version of hell consists of nine circles of suffering underneath the earth. He is guided by the poet Virgil, who essentially represents human reason. Each circle throughout the book depicts a different type of sin with a punishment according to that sin, depending on the degree of crime they committed in life. Dante as a pagan realizes the perfection of God’s divine justice. In Inferno, Dante explains that God created hell with the thought of justice. This is demonstrated in Cantos 3 at the gates of hell where it says, “Justice it was that moved my great creator; Divine omnipotence created me, and highest wisdom joined with primal love.

” (p. 1060, 4-6). This is attributing to the creation of hell and God’s justice, and it is how it shapes the nine circles of hell and their punishments. The more severe a sin was committed, the more the soul of the sinner moves farther away from God and closer to Satan. In the article by Angus Fletcher, he states that “Despair is a death, absolute in its unforgiving blockage of hope.” This is explaining that hell is the ultimate place where a sinner gets his or her justice in the form of a punishment, and that they will forever be damned and be in despair.

Dante also talks about contrapasso, which means that every crime must be paid with a penalty. An example of this is Pier della Vigna, who committed suicide after being unjustly imprisoned for something he did not do. Dante and Virgil meet him in the seventh circle of hell where violence is brought upon self. Dante learns that people who committed suicide are punished by being stuck in one place forever as a tree. Pier della Vigna tells him, “The moment that the violent soul departs the body it has torn itself away from…Our bodies shall hang forevermore, each one on a thorn of its own alien shade.” (p. 1096, 94-108). For the people who commit the sin of suicide, justice is served by planting them in one spot forever. This is the punishment for not being cautious of the body in life. Dante is seen praising God’s justice in hell “O Highest Wisdom, how you demonstrate your art in Heaven, on earth, and here in hell!” but, also fears his punishments as shown in Cantos 14 where he sees its dreadful operation. (p. 1115, 10-12). Virgil chastises Dante for having such reactions and tells him that God’s justice is perfect. Dante describes God as merciful and caring but also shows that justice needs to be done and is more important.

God’s justice is shown in various ways throughout Dante’s journey. Like in the first circle, God shows mercy to the people there because they either lived before Christ or were not baptized. Although the people do not suffer there, they must forever live in hopelessness with no way into Heaven. As Dante and Virgil go further and further into hell, they see how cruel and vengeful God delivers justice to the sinners. John Alcorn in his article says, “Hell is a vast dictatorship.” This is describing how the sinners there have no choice on what they get to do. They are given special punishments and have to endure them whether they like it or not. For example, in the sinners in circle 8 are forced to relive the sin they committed on earth. Here, the readers can see the perfection of justice, and how each person is condemned to the severity of his or her sin. Dante gradually has less pity as he continues through the journey, and comes to understand how God’s justice is implemented. In the last circle, which is where the most severe punishment is given, is where the ultimate traitors and the devil are located. In this specific circle, justice has no exception at all. The sinners here all incase in ice, each with their own unique way of being punished.

In conclusion, justice is all about restoring balance. Divine justice takes many forms in this work, and each punishment is corresponding to the person’s crime he or she has done in life. In the beginning, Dante started his journey feeling compassionate towards the sinners and fearful towards how God implemented justice. But, as he transcended through the nine realms of hell, he acknowledged how perfect God’s divine justice was executed. Dante depicted hell as the place of eternal suffering and perpetual horror. The more a person committed a sin on earth, the more he or she was severely punished in hell. One can relate this to the epic story of The Odyssey, where the suitors took over Odysseus’ home when they thought that he was dead, and could not go back to take his throne. Justice was served when Odysseus went through his own journey to go back to Ithaca, and he killed all the suitors for taking what was his in the first place. Dante witnessed divine justice throughout his journey through the depths of hell, and how each sinner was punished the right way. In Dante’s Inferno, not only was justice is shown as an appropriate punishment, but also God’s significance that not only affected the lives of the living, but also of the souls of the dead as well.

God's Justice in The Inferno by Dante Alighieri. (2021, Mar 02). Retrieved from http://studymoose.com/god-s-justice-in-the-inferno-by-dante-alighieri-essay 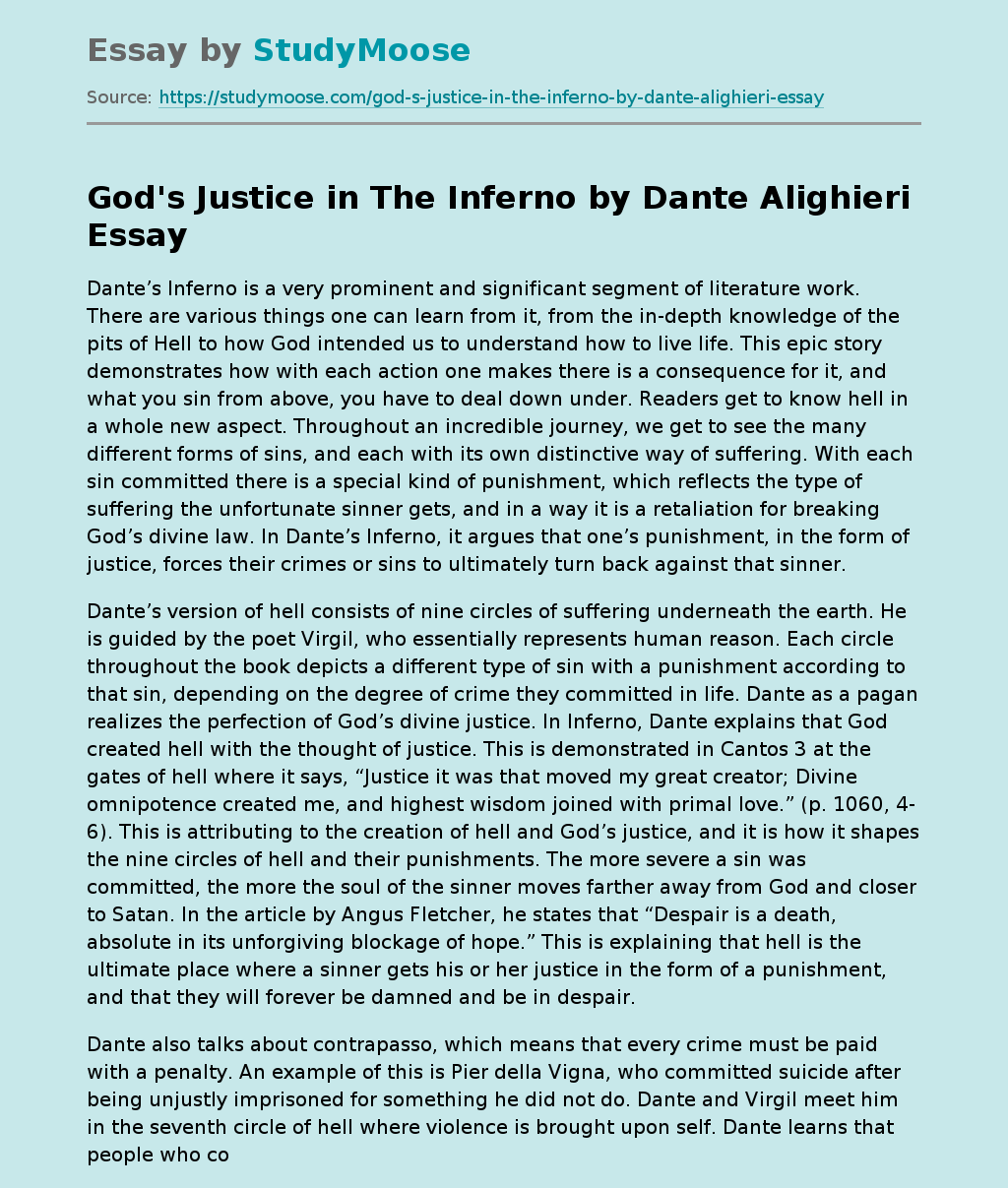