Contrapasso means suffer the opposite. It refers to the punishment of souls in Dante’s Inferno by a process either resembling or contrasting with the sin itself. There are many examples of contrapasso in Dante’s Inferno, as he travels ever deeper into the depths of hell. In the Inferno, we are given a tour through Hell by Dante, who is a middle-aged man. The Inferno is a story of a journey given by two different Dantes: Dante the pilgrim and Dante the author.

Turn in your highest-quality paper
Get a qualified writer to help you with
“ Dante’s Inferno: Contrapasso ”
Get high-quality paper
NEW! AI matching with writers

He has a natural emotion of pity, which he is often reprimanded for. At the beginning of his journey, he is confronted by three animals.

Dante uses the concept of contrapasso to express his own views on ethics of various sins, reflecting on the cultural and political state of Italy at the time. Before Dante and Virgil enter Hell proper, they find the opportunists in the vestibule.

They are running around wildly chasing a banner, while nude being stung by hornets and wasps. When the split came between Satan and God, they tried to stay neutral, and now they must suffer their punishment. Here, the banner symbolizes a leader, serving as a direct punishment for their indecisive nature.

They come across limbo next, where the virtuous pagans are. These are the souls of good non-Christians, who are stuck in limbo because they were never baptized and never went to church to study Jesus. This is where Virgil and the poets reside.

Limbo is not a bad place to be, and their only punishment is that they will never get to see the face of God. This is a fitting punishment because while alive they never knew of God, and now they are forbidden from him. They encounter the least offensive sinners in the first ring of Hell, represented by the she-wolf. Once inside the gates of Hell, Dante encounters the Carnal (or lustful). The souls who are in this first section of Hell are so because they let their lusts control them in life. The punishment of the Carnal is that they are trapped in a whirlwind, blizzard storm.

They see the object of their lust, but they cannot have sex in Hell. They are doomed to chase their love around in the whirlwind, and they cannot satisfy their needs in any way. Contrapasso is appropriate here because while living they could not control their urges and always satisfied their needs, but now in Hell they are not allowed to. In circle three of Hell, we find the gluttons. Ciacco is a representative of the gluttons whom Dante knows personally. Ciacco means hog in Italian. Because gluttony is a sin of incontinence, their punishment is wallowing around in a slushy mound of garbage.

The gluttons are in a storm of putrefaction. Gluttony was considered a major sin back in Dante’s day. Also in this circle are the hoarders and wasters. They contribute to each other’s punishment as they are in a constant rock war. Hoarders and wasters are two extremes. This is contrapasso because the hoarders are constantly trying to take the rock, while the wasters are trying to get rid of it. Next, they come across the wrathful and sullen. They are stuck in the Marsh of Styx. The sullen were drawn within themselves and tried not to associate with others in life, they took a sour disposition towards life.

Their punishment is appropriate because they are stuck at the bottom of the marsh, beneath the slimy surface. Moving along through Hell, Dante and Virgil come across the heretics. This is a sort of a transitional stage between the sins of incontinence and violence. A heretic is anyone who doesn’t adhere to strict Catholic doctrine. Heretics committed some of the worst crimes, according to Dante. Their punishment was to spend eternity in a grave on fire. Contrapasso is in effect here because heretics thought that the soul dies with the body, and since they believe their souls died, they are entombed.

Those who committed suicide became trees. Since they rejected God’s gift of body, they are forced to stand still and see the human life they rejected. This is their contrapasso, also whenever a limb from the tree falls off, they feel it. The final form of violence is that against God. These blasphemers, who curse God, are punished in circle seven, round 3. They are forced to lie in a field of burning sand and a fire rain constantly falls down on them. This is ironic because it is the first time while Dante is in Hell that we actually see fire. Circle eight of Hell begins the worst sins, those of fraud and treachery.

These sins are the worst because it breaks the trust of the individual. The usurers are loan sharks. They do not further mankind, they just want money. According to The Holy Bible, it is unnatural to charge usury. Their punishment is to carry a pouch with lead weights around their necks. They constantly have to fight off fire and chains from lashing devils with their hands. This is their contrapasso because they used to use their greedy hands to abuse people by taking their money. The panderers and seducers are punished by having to constantly run from one side to another, and demons are there whipping them.

The second section contains the flatterers. Because they lied and figuratively slung excrement from their mouths, they are punished by wallowing in excrement, which they flatter. This is a perfect example of contrapasso. The fortune tellers and diviners presumed to have the power to see God’s future, but most of them are just tricksters. Their contrapasso is that their heads are twisted completely around, and they can no longer see what’s ahead of them. Dante sees weeping shades slowly marching in single file, each one covered from head to foot with a golden cloak lined with lead.

It is appropriate because on the outside the cloaks look beautiful, but on the inside they are horrible, like the hypocrites, and they are weighed down by their guilt. Contrapasso for thieves is depicted as serpents chasing nude sinners, and when the snake bites them, they burst into blames and disintegrate. Sometimes they become the serpent, and the serpent becomes them. This sets out to show that thieves can’t even claim their own bodies. Also, the snakes represent trickery, and the serpents steal the thieves’ bodies, just as they stole.

Bertrand de Born was guilty of separating father and son (King Henry II and son), which caused war. His contrapasso is walking around with his head separated from his body, carrying it like a lantern. It is also symbolic of the father being the head of the family, and his body is separated from it because he separated them. In the ninth circle of Hell, Cocytus, Dante encounters the absolute worst sinners, including Satan. These sinners are frozen with the memory of their sins, and they cannot move. These evilest of sinners are in a sea of ice. Sins of betrayal are in the ninth circle.

They were cold hearted and fake in life with no warmth of heart. A unique encounter Dante has is with Count Ugolino and Archbishop Ruggiere. In life, they made a deal, but it went awry. Now, the count feeds on the head of the archbishop. Since the archbishop imprisoned him and sons, they starved to death, thus his contrapasso is that Ruggiere is Ugolino’s last meal for all of eternity. At the end of the journey, Dante encounters Satan. He is bigger than the giants with three heads. Each head is chewing on the worst sinners in history up to that point: Judas, Brutus, and Cassius.

They represent hate, impotence, and ignorance to contrast the three highest virtues of Heaven. Satan is at the center of the universe. His main punishment is that he is frozen and can’t do anything. This is the ultimate contrapasso. Dante highlights that Satan himself is an example of contrapasso as Satan’s sin of seeking God’s place as ruler of Heaven resulting in him forever ruling over the damned. Here, the sin reflects the punishment as Satan aims to raise himself higher and as a result is cast down into the depths of the Inferno. Dante takes us on an intriguing and eye-opening journey throughout his Hell.

He uses contrapasso as a way to show the many different sins and how he thinks they should be punished. Dante also places real people in his Inferno to point out the cultural and political state of Italy at that time. While he does this, he is pretty fair and impartial about who belongs in which area of Hell. Near the end of his journey, Dante finally realizes that the sinners got what they deserved, and he no longer pities them. By having Satan frozen in ice, Dante is portraying the message Satan cannot do anything, unless you let him because he is not that powerful. 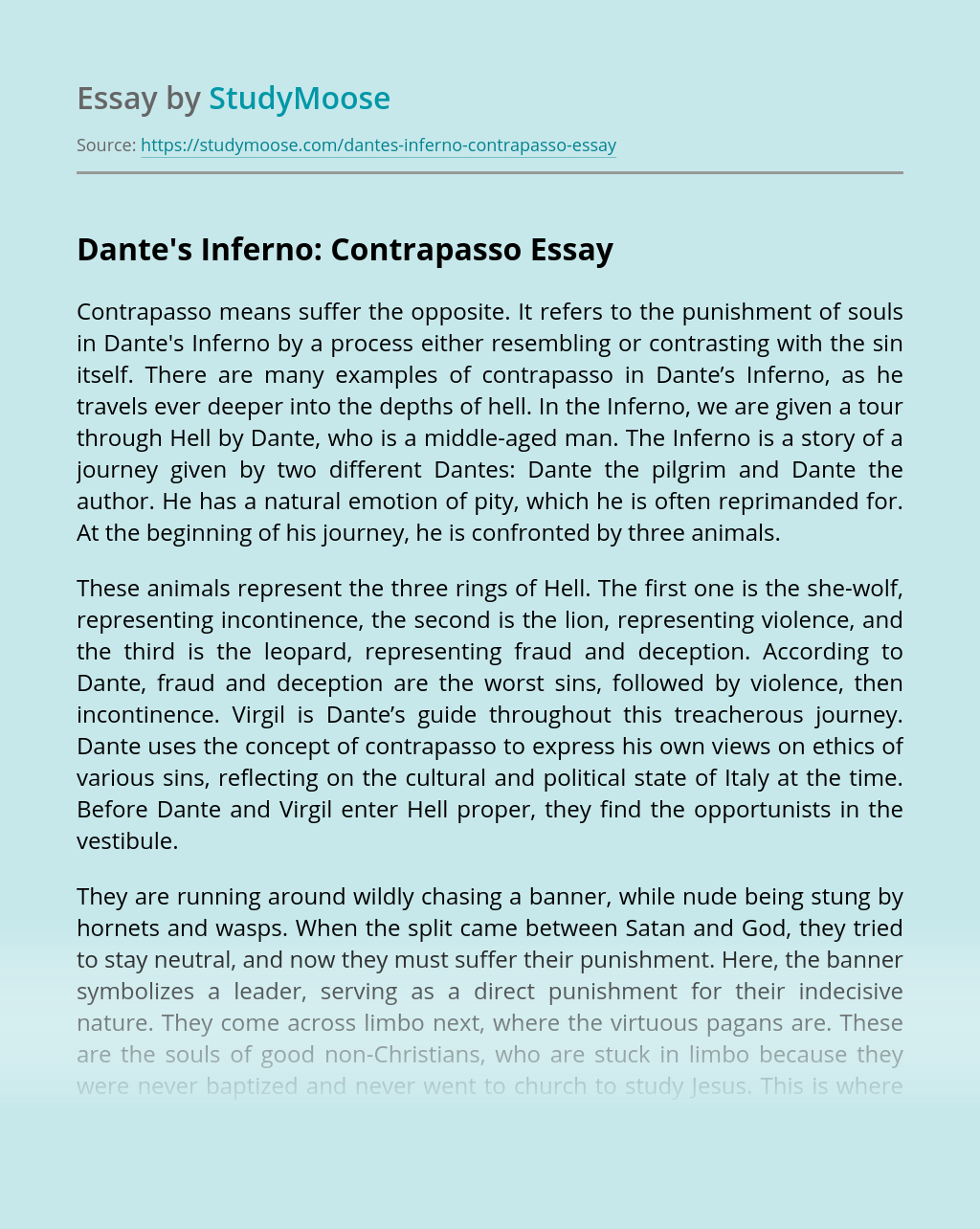 Turn in your highest-quality paper
Get a qualified writer to help you with
“ Dante’s Inferno: Contrapasso ”
Get high-quality paper
Helping students since 2015
Stay Safe, Stay Original