Reading Dante’s Inferno has been a challenge for me, especially at first when I didn’t understand some of the main themes Dante was trying to get across. My values are so different than those of Dante when it comes to the afterlife, it can be hard to read something that is so contradictory of my own beliefs. Once I understood that Dante was not being literal about the things he wrote in the Inferno it became a lot clearer to me that his main theme was that of controlling our own fate based on the choice we make to do the right thing or wrong thing.

Don't use plagiarized sources.
Get Your Custom Essay on Reaction to Dante’s Inferno Just from $13,9/Page

After I knew this, I realized that we really weren’t that different after all, because that idea appeals to me greatly. I first had to struggle to get past some of the obvious differences I feel about the afterlife, like the fact that I don’t believe in hell, in order for me to really appreciate the Inferno.

Probably the main thing that happened to me that shaped my views about Christianity in general was when my cousin tried to scare me into becoming a Christian when I was about 8 years old. He convinced me that unless I started being an obedient Christian who prayed and went to church and read the bible regulary, I was going to be sentenced to a existence of burning in hell for eternity by God. That’s a lot to try deal with as a kid, especially if the person telling you this is someone that you look up to and have love and respect for. The older I got the more I resented not only my cousin for this, but that spread to all Christians in general. His approach was to make me believe in God as a sort of insurance policy so that I wouldn’t go to hell.

After this experience I decided for myself that hell was quite possibly something that was made up by people to scare other people into believing what they wanted them to believe. I could not imagine that God would really want people to practice a religion out of fear, the idea just seemed a little out there for me. All my cousin accomplished in the end with me was to make me suspicious of any person who is Christian and anything that has to do with hell, and I don’t think that was his intention at all.

I have since learned that not all Christians are like my cousin in their views and I’m generally quite accepting of anyone and their faith, as long as they don’t try to pressure me into believing what they do. But to this day I still feel a little uneasy about anything that has to do with being punished by hell, so you can perhaps understand why it may have been a little hard for me to look past that in the Inferno. At first glance, the Inferno can just look like its just about people being punished cruely for the sins they have commited. But after a deeper look, it can be said that there is much more to it than just that.

What really helped me be able to understand the Inferno a lot better was to understand that what Dante wrote about was not meant to be a literal interpretation of how he felt the afterlife was. He understood that it would be quite presumptuous of him to think that he could really know that. Whats important is to realize that Dante uses hell in this poem as a vehicle for expressing his views about the choices people make to either do good or do bad, and being liable for those choices.

I definitely feel it is healthy to read things that vary from one’s own personal beliefs because it may bring up issues and ideas you hadn’t thought of before, possibly expanding your understanding of what you know thought you knew. It can help you learn and grow and not be stuck with certain views. Even if your values are not some how changed, I think it is still important to beable to go into something with an open mind and respect the difference of opinion. I do feel that after reading Dante’s Inferno that I have been given a new way to look at the decisions we make for ourselves in this life. Whether I believe in hell or not, I can completely appreciate this new perspective, and it makes me grateful that I was given the opportunity to read Dante’s Inferno. 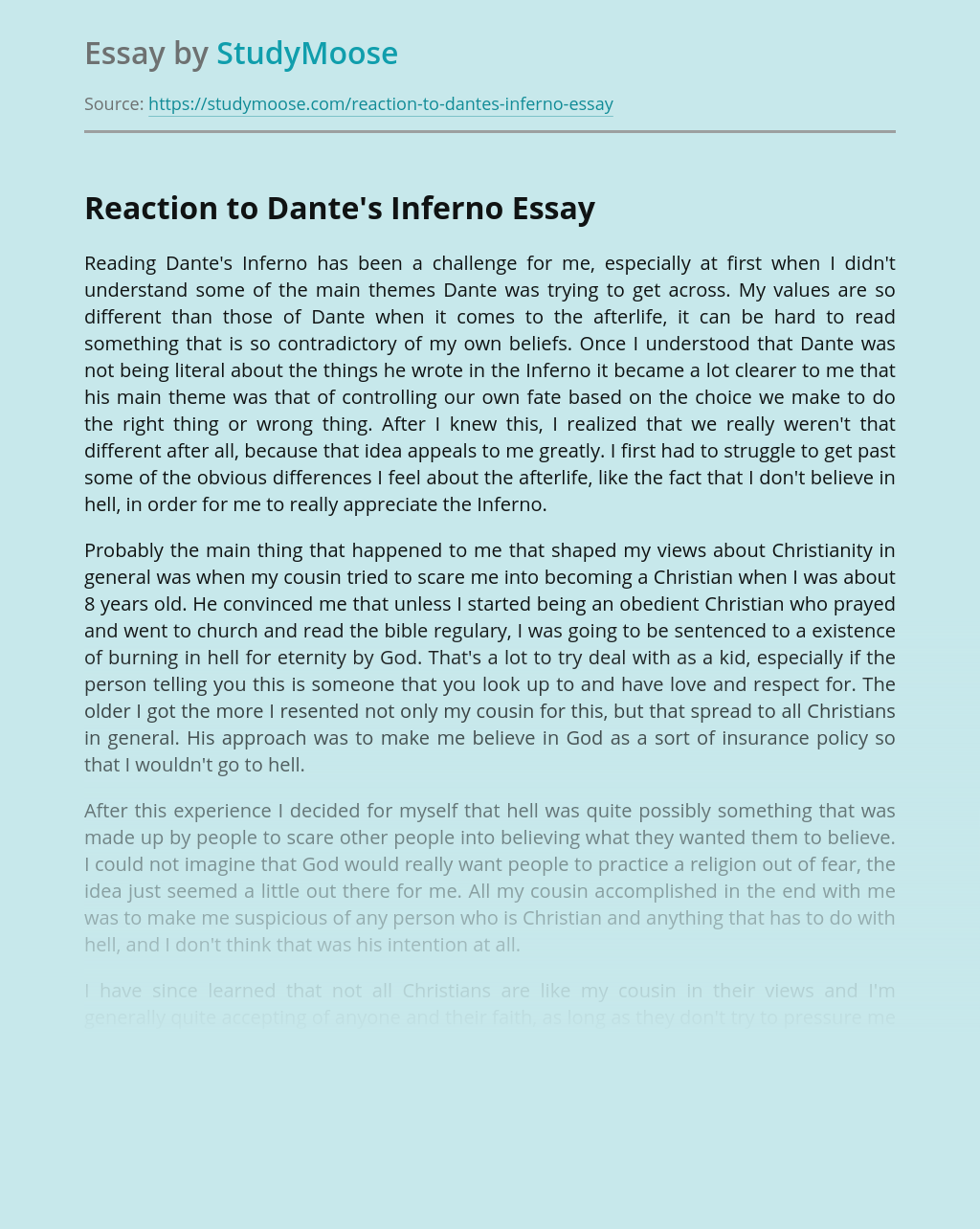 View sample
Get Essay
Back for Christmas

Interpretation The story “Back for Christmas” was written by a highly skilled modern English writer John Collier (3 May 1901 – 6 April 1980). His stories may be broadly classified as fantasies, but are really sui generis. They feature an acerbic wit and are usually ironic or dark in tone. His distinction is a grotesque...

Did you happen to catch the season finale of “Friends” on May 6th? “The exhaustively hyped series finale of “Friends” drew 52.25 million viewers for its extended 66 minute running time.” A 30-second commercial spot garnered a cool $2 million, costing advertising heavyweights such as Allstate, Anheuser-Busch, Chevrolet, General Electric, Hewlett-Packard, as well as Walt...

View sample
Teamwork is the key to success

Teamwork is a group of people with various complementary skills, working together towards a common vision. It generates performance greater than the sum of the performance of its individual members. There are some tasks that cannot be done individually, but can be easily accomplished by working in a team. . Teamwork compiles the ideas of...