My reaction to Dante's "Inferno"

While I was looking back through all the freewrites I had written about Dante’s The Divine Comedy I realized how much I had really progressed in my understanding of the poem itself, and in doing so had really been given a whole new view on religion and spirituality. The freewrite that showed this growth to me the most was the second one we had written after reading Canto’s III and IV. I had a rather strong reaction to the ideas presented to me within those sections that dealt with the concept of Limbo.

That reaction brought on somewhat of a domino effect, bringing up even larger issues for me that had to do with my views on Christianity and the assumptions I made about it. Through further reading and class discussions I was able to start looking The Divine Comedy with a whole new angle, allowing me to grasp Dante’s message of being responsible for your actions so that you can be in control of your own fate.

Limbo was making little sense to me. I could not comprehend how God could let these worthy souls, especially Virgil, not go up to heaven just because of certain technicalities that were beyond their control, such as not living in a time of Christianity or living in a culture that was not Christian. Or being held up because of something as small as not being baptised. It seemed so arbitrary to me that God could get so hung up on these details and punish those souls by not permitting them to go to heaven even though they seemed to deserve it.

I am really not religious at all, and I have a lot of my own views about the afterlife and God. Realizing that my values are probably different than the average Christian, I adopted what I think of as the “normal” Christian view when I go into anything that deals with religion. That view, to be simplistic about it, is that we go through life, and when we die, God either rewards or punishes us for the life we led by sending us to heaven or hell. So when I began reading The Divine Comedy, I was trying to apply that overly simplistic view to the poem, and it led to a lot of confusion for me.

I had to overcome my assumption that God was the judgemental ruler and determiner of all things and realize that Dante wants us to understand that we have all the control over our fate because we have the power to choose right from wrong in any situation. In this poem, it’s a matter of making the right decisions and doing the right things to lead a life of God, or its choosing to do the wrong thing, therefore giving your self a hellish existence.

Dante gives us the idea that God is eternally forgiving and accepting of us. Therefore the people we see suffering so horribly all throughout the Inferno have made the decision to be there. None of them ever ask to get out. They are quite literally still choosing to be in hell because they refuse to see the evil in their decisions. You can’t feel sorry for any of them because of this. It gives it a certain level of deservidness when you read of all the tortures going on in the Inferno. That I think really explains the idea of contrapasso.

You get what you deserve. This is seen in every level of hell, it is what the Inferno is based upon, it is the physical punishment that fits the sin. Like in the seventh circle, for example, tyrants and murderers are immersed in a boiling river of blood. Or in the first ring of the ninth circle, traitors are immersed in ice with their heads bent down. Dante feels that they chose to sin, and now they are paying for it. They choose to be there by not recognizing their responsibility to do the right thing.

I think it is really hard for anyone to read about the suffering in hell and not feel some sympathy for those who are going through it, whether they are choosing it or not. I think it should be understood that Dante was not being literal about it all. Contrapasso is something that I think is supposed to be somewhat amusing to think about and can create some gratifying mental images for one’s imagination, but to have people actually suffering I think it feels a bit harsh. Hell in The Divine Comedy I think is mainly used for allegorical purposes, and contrapasso accomplishes that. He was writing a poem, an entertaining one at that, and I highly doubt he was trying to show us what the afterlife was really like. What I do think he was trying to do was tell us that we have the power to choose right from wrong, and based upon that we can decide our own fate. I feel that anyone can find some solice in that idea, whether you are Christian or not.

Limbo is still probably the hardest concept for me to accept, but I do know that before I just thought it was really unjust of God to hold back worthy people, whereas now I understand that it is really a bit more complicated then that. Based on how every other level of hell works in The Divine Comedy, I might say that God really doesn’t have much to do with keeping them there, it has more to do with them keeping themselves there. Or perhaps Limbo is just an exception to that rule. It’s hard to say. But by realizing how simplistic I thought the “normal” Christian view was, I think I’ve gained a lot in understanding that the views of Christianity can be seen in a multitude of ways. It would certainly be unfair of me to continue to assume I know how anyone, Christian or not, views the afterlife and God.

My reaction to Dante's "Inferno". (2016, Jul 20). Retrieved from http://studymoose.com/my-reaction-to-dantes-inferno-essay 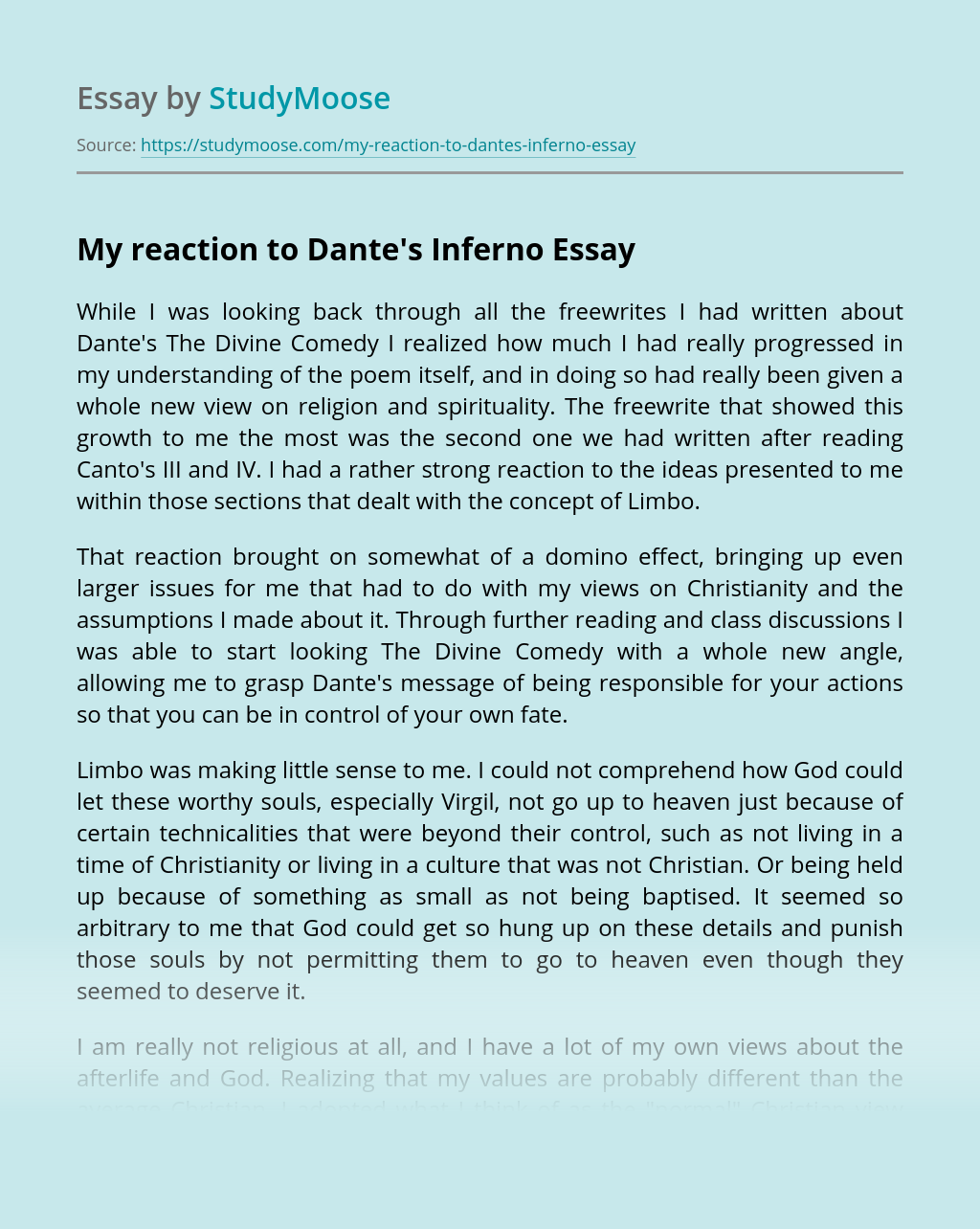 Don’t waste time
Get a verified writer to help you with My reaction to Dante’s “Inferno”
Hire verified writer
$35.80 for a 2-page paper
Stay Safe, Stay Original