One of the overriding themes of William Shakespeare’s Hamlet is the futility of revenge. The most obvious insistence upon revenge in the play is that of Hamlet himself who seeks to right the wrong of the murder of his father by Claudius. Both Laertes and Fortinbras are also out to seek revenge. Every one of the three eldest sons had one thing in common: they all wanted revenge for a slaughtered father. In the time in which this play is set, avenging the murder of a father was part of one’s honor, and it had to be done.

All of the three sons swore vengeance, and then acted towards getting revenge for the deaths of their fathers. Shakespeare demonstrates how rage emerges in many different forms. Hamlet, Laertes, and Fortinbras bring the theme of revenge to life, revealing the complexity and richness of human feelings. Hamlet’s method of revenge is perhaps the poorest method of all. He spends too much time thinking about his actions and takes no immediate action without premeditative thought.

Hamlet’s reaction to the ghost changed after thought and this was his main problem. His approach to achieving revenge was incorrect from the start. He thought and planned to catch Claudius at the ‘right’ time; he excused himself and reasoned with himself as to why timings were not right. Laertes has no need for revenge until Hamlet kills his father, and he finds out that his sister is dead. It is for this reason that he goes along with the scheme to kill Hamlet, however he falters towards the end.

His last words blame Claudius; however Hamlet also dies, and so his revenge is complete. After Hamlet kills Polonius, Laertes faces the same problem that Hamlet does – a murdered father. Yet, Laertes’s reaction to his father’s death is very different from Hamlet’s response to news of his own father’s murder. While Hamlet broods over the murder for much of the play, Laertes -takes immediate action. He storms home from France as soon as he hears the news, raises a crowd of followers, and invades the palace.

Therefore, he needs to recover the land in order to regain his family’s honor and the honor of the nation. Fortinbras is also humbled by his father’s death. He believes that regaining the territory lost during the war will restore the honorable conditions in Norway that existed before the war. But, while Hamlet sits around contemplating life and death, Fortinbras takes clear and immediate action by raising an army to reclaim Norway’s lost territories.

Though his uncle (the current king of Norway) diverts Fortinbras from attacking Denmark, in the end, prince Fortinbras helps himself to the Danish throne. Hamlet, Laertes and Fortinbras seek retribution for the violent deaths of their fathers in different ways and for different reasons, but all three acts of revenge contribute to the theme that revenge is ultimately a pointless endeavor. Hamlet’s brooding over the morality of the act of revenge stands apart from that of the other two men because he represents the coming of a more enlightened age.

Cold-blooded murder of the type that Laertes seeks is not acceptable to Hamlet; indeed he also seeks everlasting punishment. The revenge of Fortinbras is caused by the desire to regain a lost land of little consequence, pointing to the theme of how revenge can be enacted for the most illogical of reasons. Ultimately, the most successful method of revenge was Fortinbras’. He did not intend to use violence or cold-blooded murder but rather to seek what is his and bring back the rights and honor of his father. 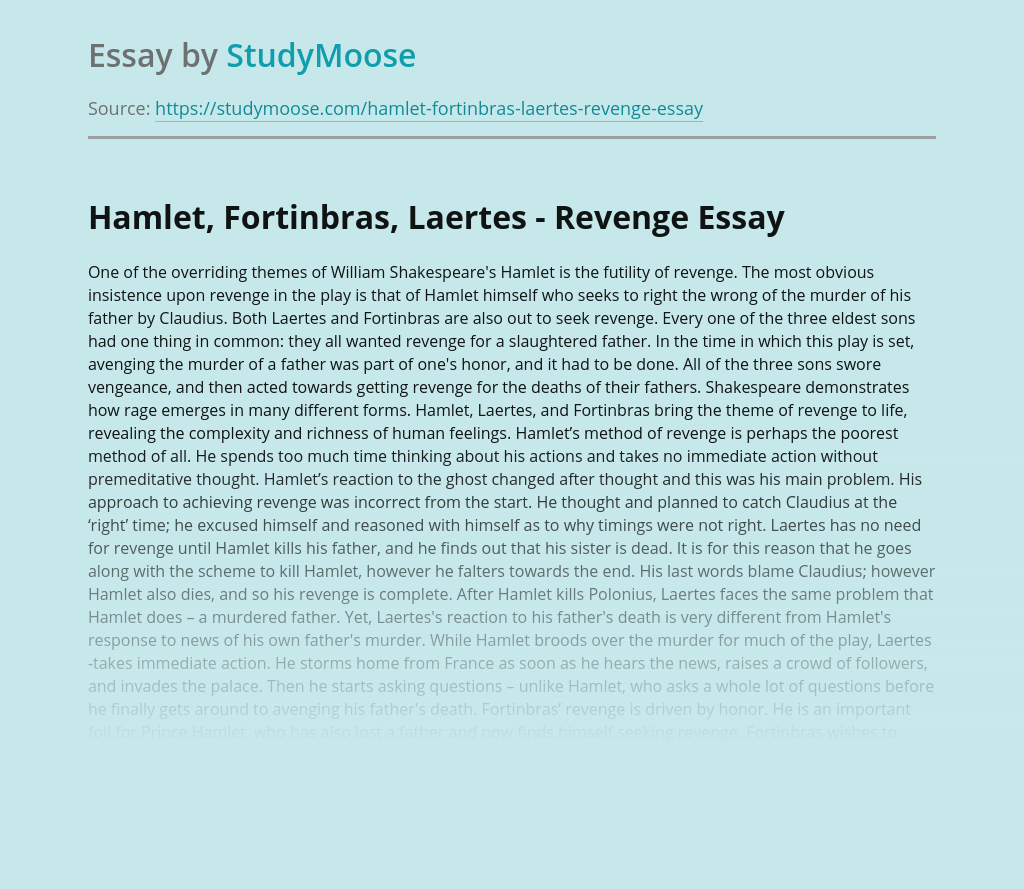