It is without doubt that William Shakespeare has created many unique, thought – provoking characters. Hamlet is by far Shakespeare’s most compelling character. In Shakespeare’s play Hamlet, various character traits, exhibited by Hamlet, can be seen through his foils. Similarities with Hamlet and Horatio’s education, as well as their levels, can be drawn. However, Hamlet’s character is in constant change and even philosophical. Fortinbras, without question encompasses many of Hamlet’s qualities. They are both born with nobility, along with a similar lineage.

Don’t waste time
Get a verified expert to help you with Hamlet through his foils – Laertes, Fortinbras and Horatio
Hire verified expert
$35.80 for a 2-page paper

However, Fortinbras is more aggressive and even sneaky. Laertes, Hamlet’s late antagonist, is both impulsive and righteous. However, they differ in terms of their nobility, as well as their father’s behaviour. The character traits exemplified by Hamlet also comprise his foils.

In relation to Hamlet’s three foils, Horatio is the most dissimilar. When Horatio first enters the play, Hamlet says, “And what make you from Wittenberg, Horatio.” (I,ii,171) Hamlet is making reference to the city that their university, which they both study at, is located.

With respect to education, these two characters are one; they are both deemed scholars. One characteristic also shared between the two is their courage. When the ghost first appears Horatio fiercely challenges him, “By heaven I charge thee speak.” (I,i,58) Ghosts are unique in the respect that they are the supernatural; they are able to walk through doors, be immune to fires and even ascend. Thus, upsetting a ghost is certainly a courageous act as Horatio is easily susceptible to consequence.

Another similarity, these two characters demonstrate is their belief in God. When the ghost leaves Horatio says, “Before my God, I might not this believe.” (I,i,65) Hamlet also makes reference to an afterlife, “But that the dread of something after death, /The undiscovered country from whose bourn/No traveller returns.” (III,i, 85-87) In this portion of his soliloquy, Hamlet is making reference to afterlife, a belief held in conjunction with religious people. Although this was a religious time period, not all characters make references to God, thus this quality is worth addressing. Hamlet and Horatio have many personal characteristics that are similar.

Like all other characters, Hamlet and Horatio have their differences. A major idea exemplified throughout the play is that Horatio is a static character, one that does not develop. Hamlet however is bipolar, demonstrating moods that are at one moment excited and the other dreadful, to name a few. When Hamlet is first introduced in the play, his mother says, “Good Hamlet, cast they knighted colour off/And let thine eye look for a friend on Denmark.” (I,ii,69-70) From her comments, it is obvious that Hamlet is suffering. Upon the arrival of the players, Hamlet transforms into a more inquisitive mood and says, “I’ll have grounds/More relative than this. The play’s the thing/Wherein I’ll catch the conscious of the King.” (II,ii,615-617) Another difference between Hamlet and Horatio is Hamlet’s philosophical nature. This is one of Hamlet’s only constants throughout the play. Hamlet demonstrates this quality through many of his soliloquies. In the most famous speech in literature Hamlet says,

To be, or not to be, that is the question.

Whether ’tis nobler in the mind to suffer

The slings and arrows of outrageous fortune,

Or to take arm against a sea of troubles

In this speech, Hamlet is intelligently contemplating living through pain and suffrage rather than committing suicide and ending the harsh life. Hamlet and Horatio differ in terms of consistency and a lack of trait.

In relation to Hamlet’s three foils, Fortinbras is the most similar. Fortinbras and Hamlet are both born into nobility; their fathers were both rulers of their respective countries. However, this similarity runs deeper then readers first imagined. Fortinbras and Hamlet are in identical scenarios; they have dead fathers with uncles governing their country. Another similarity between these two are the purpose they are presently seeking. When the guards notice activity in the mills, Horatio says,

Of unimproved mettle hot and full,

Hath in the skirts of Norway here and there

For food and diet, to some enterprise

That hath a stomach in it, which is no other, …

But to recover of us, by strong hand

In this speech, it is obvious that young Fortinbras is out for revenge. He is not content with what happened to his father. After a visit by the ghost, Hamlet says, “Prompted to my revenge by heaven and hell.” (II,ii,596). In this soliloquy, Hamlet mentions his existential purpose in life, which is to extract revenge for his father, as he too is unhappy with the current conditions. These two characters share similarities that they have been born into.

Of this his nephew’s purpose, – to suppress

His further gait herein, in that the levies,

In this speech, it is clear that Fortinbras is more driven in his purpose and has the ‘wheels in motion.’ In one of Hamlet’s soliloquy’s he says,

But in fiction, in a dream of passion

Could force his souls so to his own conceit

That from her working all his visage waned,

Hamlet’s philosophical nature is not helping his main objective. One can argue that he has had reasons not to act when he has been given chance. However, this is clearly an instance when he should stop portraying Socrates’ and focus more on his objective. A major difference between Hamlet and Fortinbras is that Fortinbras is a snake, ruthless with intent. After threatening to attack their country, he was granted permission to pass through for battle. “Tell him that by his license, Fortinbras/Craves the conveyance of a promised march/Over his kingdom. You know the rendezvous.” (IV,iv,1-3). However, at the conclusion of the play, Fortinbras arrives ready to overtake the kingdom. He doesn’t care for the gracious favour that Denmark had granted him. As well, he attacks without notice, a use practiced by terrorists in the present day; he is as evil as they come. Hamlet and Fortinbras differ in terms of their willingness as well as a lack of a trait.

Laertes and Hamlet share many striking characteristics. It is obvious that Laertes is impulsive. Upon first hearing his father’s murder, he becomes angry with the king, even accusing him of the crime.

To hell, allegiance! Vows, to the blackest devil!

Conscience and grace, to the profoundest pit!

I dare damnation. To this point I stand.

That both the worlds I give to negligence,

This speech is very powerful in conveying the vehemence that is surging through his veins. He is willing to take action immediately, not even knowing for certain who murdered his father. Hamlet displays his impulsiveness when he is speaking with his mother, after Polonius’s murder. When Hamlet pulls the curtains he says, “Thou wretched, rash, intruding fool.” (III,iv,37). Hamlet is astonished that Polonius is the one behind the curtains. Hamlet is filled with the intent on taking action but consequently does so impulsively and results in the wrong death. Another similarity between Hamlet and Laertes is there good nature, good intentions. Before his departure, Laertes has strict instructions for his sister. “And keep you in the rear of your affection/Our of the shot and danger of desire.” (I,iii,36-37) Unlike some of Shakespeare’s other characters, Goneril and Regan, Laertes genuinely cares for his sister. He warns her of the possible ramifications of continuing her relationship with hamlet, such as a broken heart. Hamlet is also obedient to his father’s wishes, “revenge his foul and most unnatural murder.” (I,vi,29).

Hamlet’s father instructs him to avenge his death. Hamlet is upset that his father is suffering and seeks to fix the ‘rotten things in Denmark.” (I,iv,99) Another similarity between these two characters is that their fathers are both sneaky. Polonius exemplifies this when he grants his son permission to return to Paris. He instructs Reynaldo, “By indirections find directions out.” (II,ii,71) Polonius makes it clear that he does not want his son to be aware that he is secretly keeping watch on him. Although Claudius is not the biological father of Hamlet, through marriage he obtains ‘fatherly’ figure. Claudius is intent on learning why Hamlet is upset and does not mind being sneaky in the process. When Polonius suggests hiding and listening to Hamlet, he does not object to it, he says, ‘thanks my dear lord.” (III,iii,38). Hamlet and Horatio have many personal characteristics in common.

One of the differences between Hamlet and Laertes is irrational thinking. When Claudius and Laertes are speaking, Laertes suggests, “To cut his throat in the church.” (Iv,viii,139). This is obviously an irrational method of obtaining justice. Hamlet is arguably the most intelligent character in the play. This is demonstrated countless times throughout the play. One of the instances is when the king sends Rosencrantz and Guilderstern to speak to Hamlet. It does not take long for Hamlet to be certain of their true intentions. For he says, “You were sent for, and there is a kind of confession in your looks which your modesties have not craft enough to colour.” (II,ii,292-295) Another difference between Hamlet and Laertes is their nobility. Hamlet is the heir to the throne, a noble figure by birth. Laertes, on the other hand, is the son to a councillor. They are both recognizable, but not of nobility. Laertes differs from Hamlet by encompassing less gratifying traits.

Hamlet’s characteristics can be seen through his foils. Horatio and Hamlet hold the same position in education and studied at the same university. They are both religious and courageous figures. They differ in terms of their nobility and constant moods. Fortinbras and Hamlet share lineage and nobility but are different in terms of aggressiveness and philosophical nature, or lack there of. Laertes and Hamlet are both impulsive, good with sneaky male parentage. They differ in terms of their nobility and even irrational thinking. Hamlet is Shakespeare’s most loved character. However, he is a combination of other characters. Thus he is not as truly unique, as one initially perceived.

Hamlet through his foils - Laertes, Fortinbras and Horatio. (2016, Jul 04). Retrieved from http://studymoose.com/hamlet-through-his-foils-laertes-fortinbras-and-horatio-essay 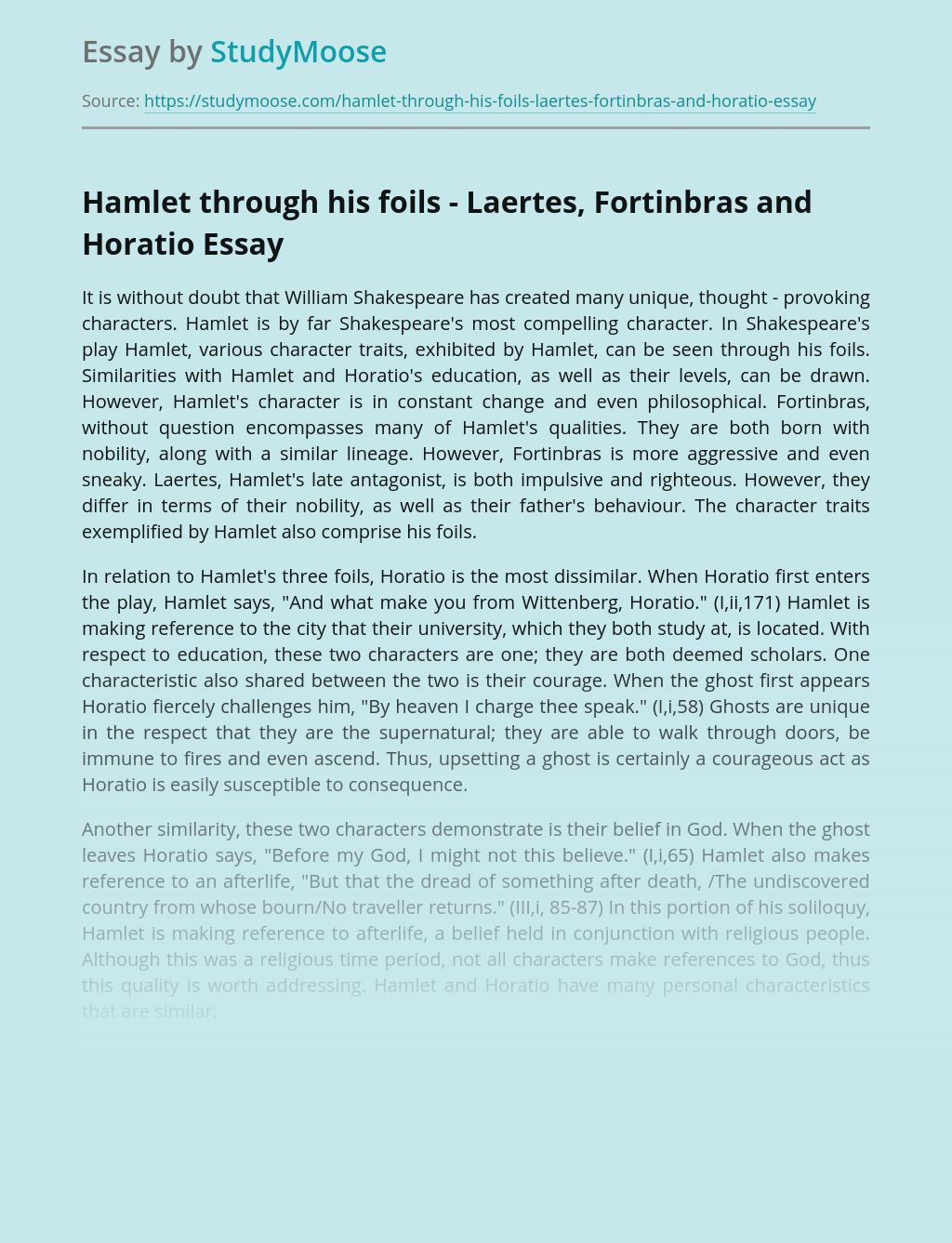 Don’t waste time
Get a verified expert to help you with Hamlet through his foils – Laertes, Fortinbras and Horatio
Hire verified expert
$35.80 for a 2-page paper
Stay Safe, Stay Original