Laertes and Ophelia as Character Foils in Hamlet

“The spirit that I have seen May be the devil: and the devil hath power To assume a pleasing shape; yea, and perhaps Out of my weakness and my melancholy, As he is very potent with such spirits, Abuses to damn me:” (2.2.58)

In William Shakespeare’s classic drama, ‘Hamlet’, the titular protagonist, Hamlet, is a dynamic, round character with constantly evolving traits. The character Hamlet, himself, interestingly, is not noted for what he does, but rather, is noted for his indecisiveness and lack of taking action throughout the play.

Don't use plagiarized sources. Get your custom essay on
“ Laertes and Ophelia as Character Foils in Hamlet ”
Get custom paper
NEW! smart matching with writer

Despite Hamlet having a ulterior motive throughout the play, he is constantly seen to be deliberating as to whether or not he should act on his actions. Through his numerous soliloquys, Hamlet’s innermost reflections are seen, many of them contemplating existence, and the nature of the task which he has taken upon himself to carry out: the task of killing his uncle, the current King of Denmark.

In ‘Hamlet’, there are numerous characters, many of whom belong to either one of two families focused upon in the play: there is the royal family, consisting of Hamlet, his mother Gertrude, the Queen, and his stepfather Claudius, the current King of Denmark; and there is the family of the King’s chief counselor, Polonius, which includes his daughter, Ophelia, and his son, Laertes.

In both families, the parent-child relationship is heavily focused upon. Compared to the other ‘children’ of the play – Laertes and Ophelia – Hamlet’s slow, deliberate thinking is brought to the forefront, with both Laertes and Ophelia acting as character foils to Hamlet.

Hamlet and Laertes may both be defined by their fathers, and how they react to them, as well as the way they are viewed by the public. Hamlet and Laertes are seen to be in similar situations: both of them are sons, and students who were studying abroad at the time of old King Hamlet’s death. Both of them appeared to have shared a relatively close relationship with their fathers. After his father’s death, Hamlet dressed in black, in grief and mourning. When the Queen asked why Hamlet seemed to be so affected by his father’s death, he replied, ‘”Seems,” madam? Nay, it is.’ (1.2) Polonius, meanwhile, had been hesitant to let Laertes return to France, stating that Laertes had “wrung upon me my slow leave by laborsome petition, and at last upon his will I sealed my hard consent.” (1.2)

Both Hamlet and Laertes are juxtaposed when their respective fathers are murdered, contrasting them – while both feel wronged by their fathers’ deaths, the means with which they take action are different. Hamlet did not consider revenge until the Ghost told him to “revenge this most foul and unnatural murder”. (1.5) Even then, Hamlet took action slowly, carefully and deliberately planning out the steps of his plan with which to get revenge. Laertes, however, upon hearing of his father’s death, returned to Denmark, smashing the doors to the Elsinore castle open, demanding that the “vile king” should “give (him his) father”. (4.5) Their moral compasses, too, are exceedingly different.

Hamlet had had the opportunity to murder Claudius while Claudius was praying, but chose not to, thinking that if he killed Claudius then, he would “this same villain send to heaven”, showing that he still believes in a higher power, and demands that justice be paid. (3.3) Conversely, Laertes, when asked by Claudius what he would do to prove that he was “in deed (his) father’s son more than in words”, Laertes stated that he would “cut his throat i’ th’ church”. (4.7) Through this comparison, it may be seen that while Hamlet is uncertain about committing murder to avenge another murder, Laertes has no hesitation about it.

How Hamlet and Laertes are viewed by other characters, too, shows the similarities between both of them, despite the differences in how they act. Both of them are loved by the public, and are competitors for the throne of Denmark. Claudius himself states that “the great love the general gender bear (Hamlet)” is the reason that he does not prosecute Hamlet. (4.7) Laertes, too, has the affection of the public, evidenced by their cries of “‘Laertes shall be king, Laertes king!'” (4.5) Due to this popularity, the king naturally has reason to be wary of both of them, a trait which is reflected in his chief counselor, Polonius.

Polonius is seen to be spying on various characters, including Hamlet and Laertes – he requested that Reynaldo, a servant, should go to France and spy on Laertes; he himself spied on Hamlet. This may be interpreted as meaning that neither Hamlet nor Laertes are completely trustworthy. The other member of Laertes’ family, Ophelia, however, is loved by both Laertes and Hamlet, and Ophelia’s death results in their confrontational duel, which in turn results in their respective deaths, both indirectly killed by Claudius.

Ophelia herself is a foil to Hamlet. While Laertes as a foil to Hamlet was a contrast in their actions after their father’s deaths, Ophelia and Hamlet contrast in their emotional well-being, and the kind of madness that they face. Both have been disappointed by someone whom they love – Hamlet being disappointed by Gertrude’s “o’erhasty marriage”, Ophelia by Hamlet’s rough treatment of her during his supposed madness. (2.2) While it is revealed several times by Hamlet that he is faking madness, saying that he “essentially (was) not in madness but mad in craft,” Ophelia’s madness seems less forced – after Polonius’ death, she appears to have slipped right into insanity. (3.4) Hamlet, conversely, had gone through a mourning period before appearing to be mad.

Interestingly, the contrast in how they act when they are mad – Hamlet being deliberate, Ophelia to have seemingly been truly mad – provides an even bigger contrast as to how each of them die, with Hamlet’s death occurring in a violent situation, while Ophelia’s death is shrouded with the calming natural imagery of flowers and trees. Hamlet dies due to a poisoned sword during his duel with Laertes, played out in front of an audience. The circumstances behind Ophelia’s death, however, is more unknown and ambiguous. It is implied that her death was accidentally.

According to Gertrude, that “on the pendant boughs her coronet weeds clambering to hang, an envious sliver broke,” (4.7) implying that Ophelia’s death was accidental. However, as Ophelia’s death is not shown, it is possible that she had decided to commit suicide instead. Should she have decided on death by her own hand, a powerful foil is brought in, contrasting against Hamlet, who, while seen to be contemplating suicide on several occasions, never kills himself, instead wishing “that the Everlasting had not fixed His canon ‘gainst self-slaughter”. (2.5) While Ophelia is commonly portrayed to be weak, her choosing to take her own life implies that she is of a stronger will than Hamlet, who is eventually killed by Laertes.

Ophelia, like Hamlet and Laertes, seeks revenge for her father’s death, but her form of revenge is not violent in the way that Hamlet and Laertes’ confrontational duel is. Rather than choosing to blame a single person for Polonius’ death, Ophelia instead passes judgement on the other characters in the play in a much more feminine way – by handing out different types of flowers, saying, “There’s fennel for you, and columbines.-There’s rue for you, and here’s some for me. We may call it “herb of grace” o’ Sundays.-Oh, you must wear your rue with a difference.-There’s a daisy. I would give you some violets, but they withered all when my father died.” (4.5)

Ophelia’s way of retribution for her father’s death contrasts strongly with Hamlet’s – his is a single-minded focus on killing Claudius, whom he holds personally responsible for his father’s death. While Ophelia could have gone down the same path as Laertes, demanding justice for Polonius, she does not – rather, she blames everyone in the play for what has happened. However, her way of doing this, too, provides a similarity with Hamlet – the flowers were deliberately chosen in the same way that Hamlet deliberately staged the play – in order to “catch the conscience” of those around them. (2.2)

The flowers that Ophelia chooses to hand out raises the question of her madness – has she truly lost her mind, as some characters believe, or is she just mad in certain ways, while retaining her logic in some other ways? The flowers that she chooses to hand out each conveys its own meaning: fennel is thought to mean flattery, columbine meaning foolishness, daisies portraying innocence, violets showing faithfulness, rosemary “for remembrance”, pansies for thought, rue meaning regret. (4.5) The meanings of these flowers all seem to have some connection with the characters in the play. Rosemary may be meant for Hamlet, who, to Ophelia, may seem to have forgotten who he is in his state of madness, pansies, for thought, may be meant for Laertes, to consider his actions.

Fennel may be paired with the King, a reflection of how his words are often deceiving and manipulative; columbines may be paired with Gertrude, a criticism on her actions. Daisies and violets, interestingly, do not appear to be given to anyone. Daisies, a symbol of innocence, may be a statement that Ophelia does not believe that anyone is worthy of having the flowers. That Ophelia does not hand out violets may be a portrayal of herself, a particularly interesting note, as she leaves on the note that all violets had withered when Polonius died, perhaps showing her lack of faith to anyone left.

Secondary characters in Hamlet seem to mostly be a foil of Hamlet himself – while he is slow, deliberate, and carefully plans out what he wishes to do in order to exact revenge for his father’s death, other characters reflect and contrast these traits. By choosing to place Laertes and Ophelia in similar positions as Hamlet, but making them react in different ways, Shakespeare emphasises the usage of character foils in Hamlet. All of them are the children of noblemen in court, all of them have lost a father, but all of them react in contrasting ways to each other. It may be seen that the characters of Laertes and Ophelia do increase our understanding of Hamlet, a dynamic character who is not easily understood, by providing foils against him, adding emphasis to the ways in which he acts in certain situations.

Laertes and Ophelia as Character Foils in Hamlet. (2016, Aug 12). Retrieved from https://studymoose.com/laertes-and-ophelia-as-character-foils-in-hamlet-essay 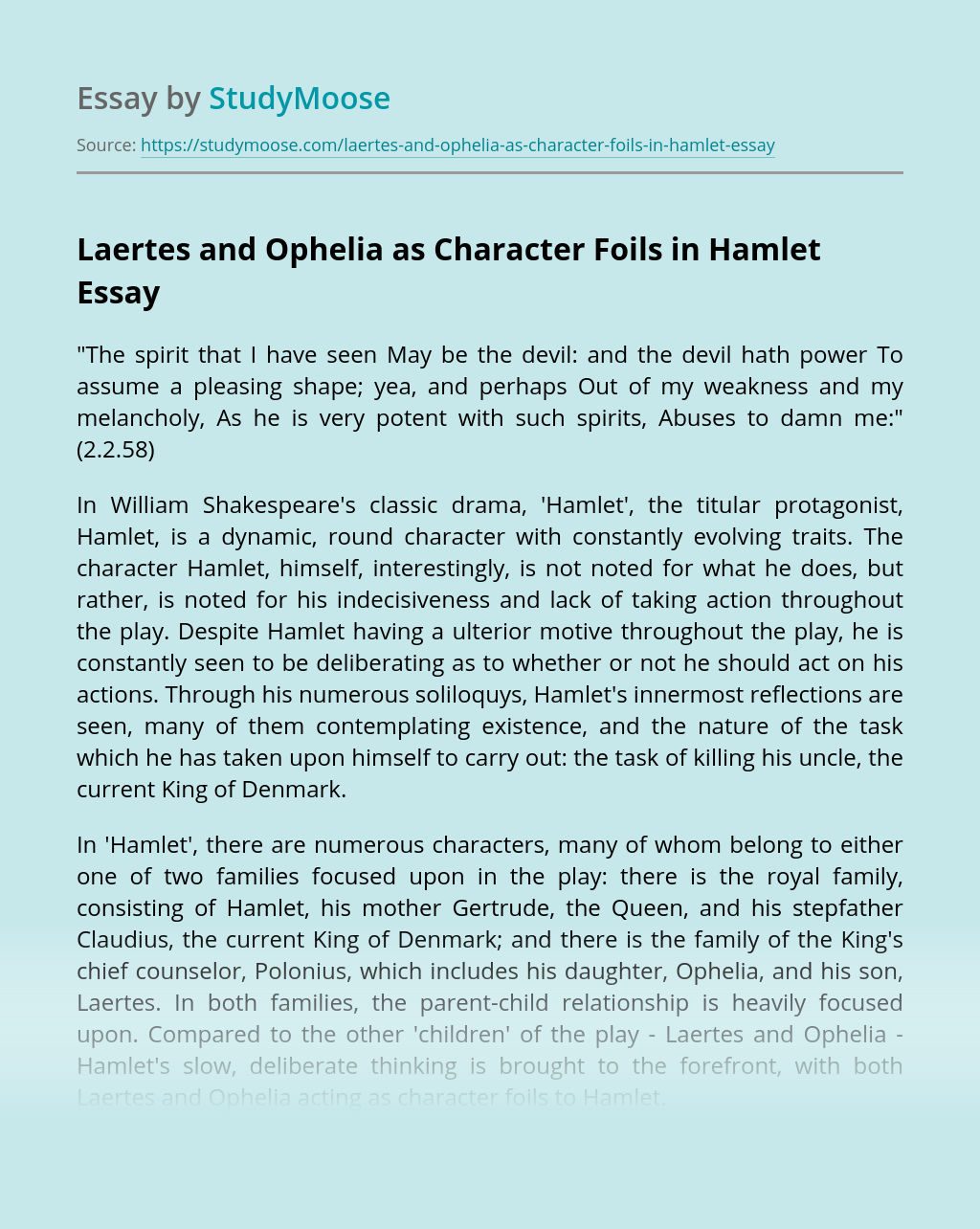