Foil Characters in "A Doll's House"

Henrik Ibsen creates characters in A Doll’s House who change throughout the play. Ibsen’s use of foil characters helps the reader understand each individual character better. Some of the characters in the play are perceived as opposites but in fact share several similarities. Krogstad and Torvald, Christine and Nora, and Krogstad/Christine’s relationship and Torvald/Nora’s relationship are all foils to each other. Foil characters are mirror images of each other; they have similarities as well as differences.

Don't use plagiarized sources. Get your custom essay on
“ Foil Characters in “A Doll’s House” ”
Get custom paper
NEW! smart matching with writer

Nils Krogstad and Torvald Helmer are foils to each other. They both have children and are lawyers, even though Krogstad lost his license because he did a forgery. Krogstad did something immoral but so did Torvald; Torvald helped Nora’s father when he had done a bad thing. Torvald and Krogstad were childhood friends and now they work together at the bank. Even though they have the same professions as each other, Torvald’s position at the bank is much higher than Krogstad’s.

Everyone hates Krogstad because he did an illegal act; on the other hand, everyone loves Torvald. The idea that Krogstad is the villain of the play is reinforced by the reactions that Nora displays whenever Krogstad is around.

Torvald helped Nora’s father in order to win favor with Nora and attain her as his wife. Krogstad no longer has a wife because she, Christine, left him for money.

Christine Linde and Nora Helmer are greatly dissimilar but also share some comparisons. Very much like Krogstad and Torvald, Nora and Christine were childhood friends. Before their meeting in Act 1, these two women had not seen each other in nearly ten years. Christine and Nora are nearly opposites of each other; Nora has children, money, and a husband, Christine is a poor widow with no offspring.

Christine is an independent woman who has been out in the world and has held multiple jobs. Nora is seen as a child who does not have knowledge of how the world works because she is trapped in a “dollhouse”. Christine supports this idea when she calls Nora a child and says, “For you (Nora) know so little of the burdens and troubles of life.”(Act 1) When the reader learns what Nora did for Torvald, it shows that Nora is more intelligent than she seems which is a characteristic that Christine also possesses.

In order for Nora to pay back the loan she took, Nora did repair work for extra money. Nora and Christine both had a sick parent who needed their help, which caused them to make a tough decision and they each chose the most important person to them. The two couples in A Doll’s House, coincidentally, are foils to each other. Society sees Nora and Torvald Helmer as a perfectly happy couple. On the other hand, Krogstad and Christine’s relationship is looked down upon because Christine seemingly left him for money.

Christine elected to leave her husband, Krogstad, so she could make more money to help her brothers and her sick mother. Nora chose to help her sick husband instead of her ill father during his dying days. The Helmer’s relationship looks stronger because Nora chose her husband over her father but in fact, her decision shows how much Nora is under Torvald’s control. Christine and Krogstad truly have the better relationship because they have adult conversations and work their problems out. These two couples are fundamentally opposites of each other except for the fact that they both become separated at some point.

Christine and Krogstad truly love each other because they have both been out in the real world and want to be together. The Helmer’s do not have true love because Nora has never been out of her “dollhouse” to experience the world for herself. Nora and Torvald’s relationship is more similar to father/daughter rather than husband/wife. Torvald loves Nora as more of a daughter and cares more about what others think of him rather than what she thinks. “Torvald: From now on, forget happiness.

Now it’s just about saving the remains, the wreckage, the appearance.” (Act 3). Torvald is extremely selfish in his relationship with Nora; Krogstad is not selfish at all in his relationship with Christine. Christine and Krogstad are able to solve their issues together as adults. The main characters in this play have foil characters who are there to support them and help the reader understand the story. Certain characters seem to be opposites of each other while also having similarities.

Krogstad and Torvald have similar jobs and families, but are also quite dissimilar. Christine and Nora were childhood friends but grew up in different worlds.

Foil Characters in "A Doll's House". (2016, May 16). Retrieved from https://studymoose.com/foil-characters-in-a-dolls-house-essay 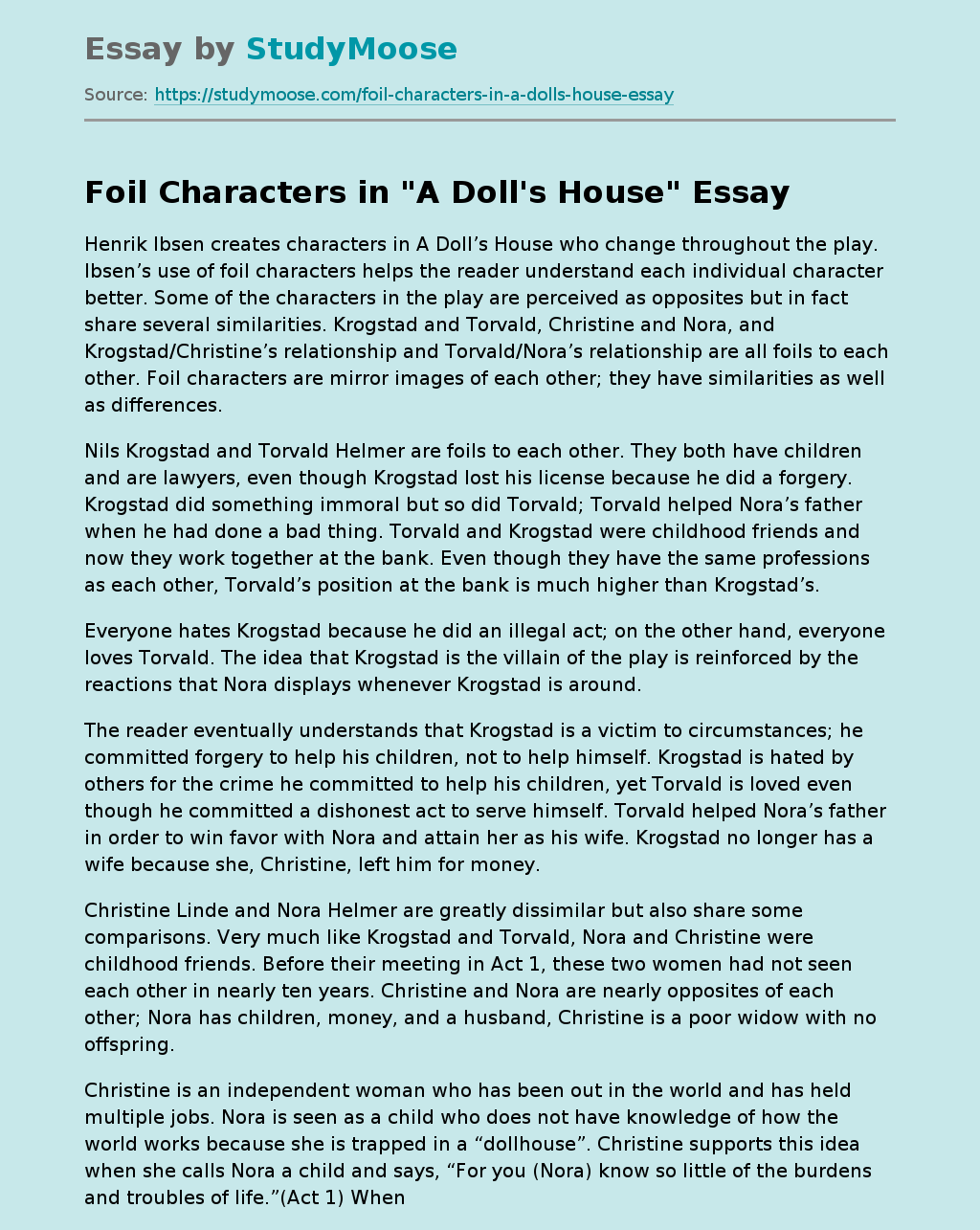