Don't use plagiarized sources.
Get Your Custom Essay on Romeo & Juliet – Foil Characters Just from $13,9/Page

While, Romeo is attracted to intelligent, nice, and beautiful women. Hence, Romeo’s attraction is brought out. Finally, Romeo’s romantic side is brought out by a lack of a romantic side in Mercutio. Mercutio is only interested in the act of love. Yet, Romeo is interested in Romantic actions more than anything. Because of this, Romeo’s romantic qualities are emphasized by Mercutio’s lack of them. Thus, Mercutio, who lacks them, stresses Romeo’s love characteristics.

Tybalt, a main character and Juliet’s cousin, experiences moments of anger, rage, and lust for revenge. Romeo benefits from this because it shows his calm, peaceful, and forgiving qualities. All through the play Tybalt shows that he is angry at something or someone. For example, in the following quote: “It fits when such a villain is a guest; I’ll not endure him.” (I, v, 74-5) Tybalt is angry with Lord Capulet for not doing anything about Romeo’s presence during the party. This underlines Romeo’s calm quality because he ignores Tybalt and Lord Capulet’s presence and calmly talks to them as if they were unknown people. Similarly, Tybalt’s Rage is noticeable throughout the play.

A good example of this is when Tybalt recognizes Romeo’s voice at the party. He immediately calls for his sward. Yet, Romeo once again ignores Tybalt’s presence and handles things peacefully. Furthermore, Tybalt shows lust for revenge. After he was told by Lord Capulet to leave Romeo alone, Tybalt comes looking for Romeo. Once he finds Romeo he challenges him to a fight. However, Romeo does not accept because he can not fight a family member even though a Capulet. Hence, Romeo shows he can forgive even his greatest enemies. Thus, Tybalt’s anger, rage, and lust for revenge highlight Romeo’s calm, peaceful, and forgiving qualities.

Benvolio, a Montague, is a unique character. Unlike Mercutio and Tybalt, Benvolio extracts Romeo’s bad side. Although Romeo is peaceful, calm, and lawful, Benvolio proves Romeo is still capable of rage, anger, and ignores the law. He dose this by giving emphasis to Romeo’s bad characteristics through his extra peaceful, extra calm, and law obedient character. First, Benvolio accents Romeo’s rage through his extra peaceful character. For instance, Mercutio was an equal friend to Romeo as he was to Benvolio; Although, Benvolio did not fill with rage towards Tybalt, when he killed Mercutio, as Romeo did. By this Benvolio highlights Romeo’s rage with his extremely peaceful character. Likewise, Benvolio’s calm character brings out Romeo’s anger filled character. After killing Mercutio and disappearing, Tybalt comes back. In the time he was gone Romeo built up anger towards Tybalt. Upon seeing Tybalt he says: “Alive in triumph, and Mercutio slain!

Away to heaven, respective lenity, And fire-ey’d fury be my conduct now!” (III, i, 122-4) This would be considered a normal reaction; however, Benvolio did not react so strongly. By this he magnifies Romeo’s anger. Finally, Benvolio’s lawful character amplifies Romeo’s law breaking character. An example of this is when Benvolio says: “We talk here in public haunt of men: Either with draw unto some private place, Or reason coldly of your grievances, Or else depart. Here all eyes gaze on us.” (III, i, 49-52) Benvolio remembers the prince’s words and warns that they should not fight in public. Even though he knows and was reminded of the new law, Romeo fights Tybalt anyway. Consequently Romeo’s action is magnified because Benvolio warned and obeyed the law. Hence, through his peaceful, calm, and lawful character, Benvolio magnifies rage, anger, and ignorance of law in Romeo’s character. 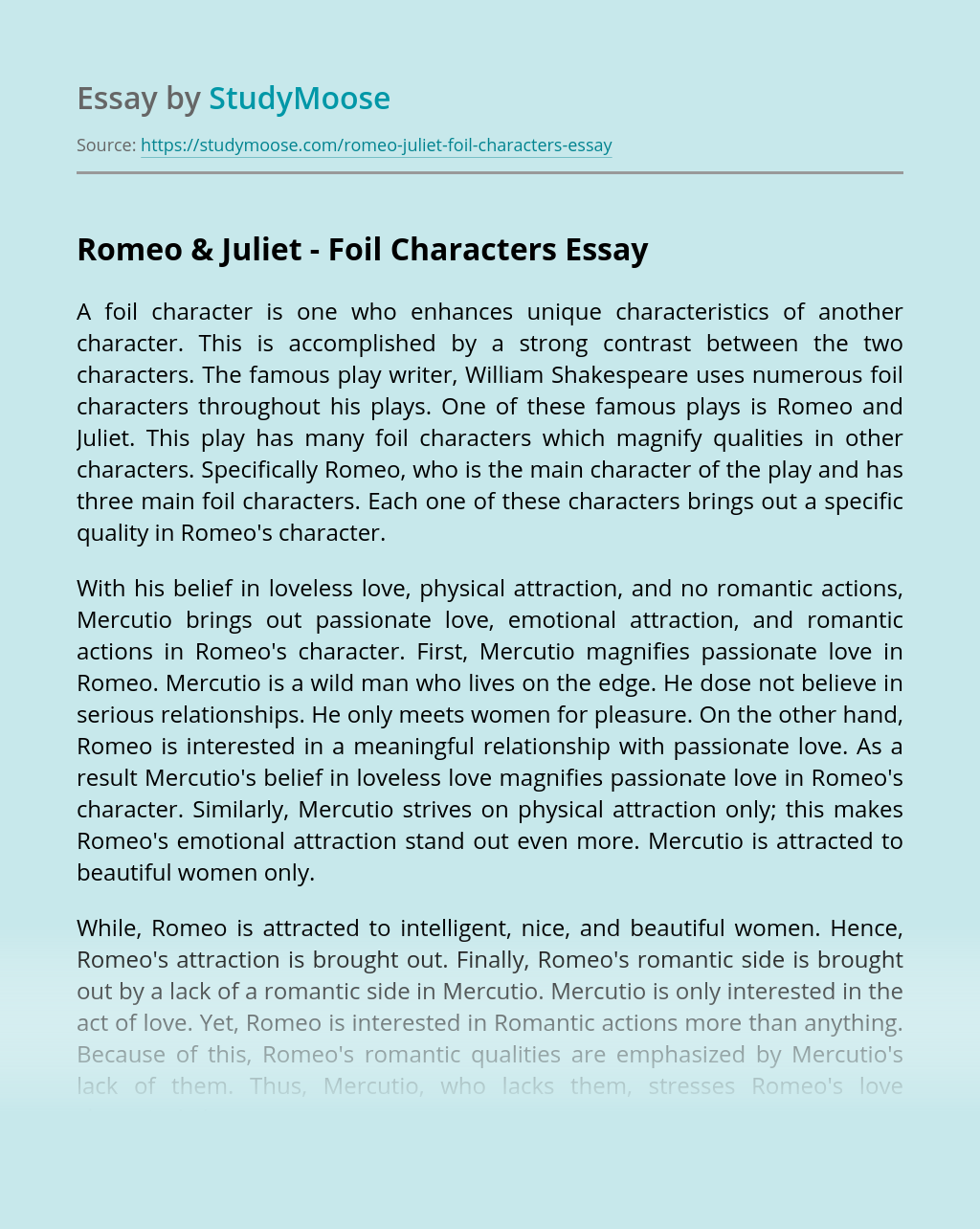 Revenge in Romeo and Juliet

The want for revenge leads many of the characters in Romeo and Juliet into murderous acts which eventually leads to severe punishments and a further need for revenge. The everlasting revenge in Romeo and Juliet is first born from ancient grudge between the Capulets and the Montagues, which is ultimately settled with the tragic, abrupt...

Romeo and Juliet: The Rivaling Families

Get Essay
What makes "Romeo and Juliet" a tragedy

“Romeo and Juliet” is one of Shakespeare’s most famous and classical tragic plays where two young lovers are destined to be together but their families bitter hatred towards one another force them apart. They soon realize that one cannot live without the other and would rather be dead than live apart; so they end up committing suicide under tragic circumstances. Shakespeare wrote...

A foil character is one who enhances unique characteristics of another character. This is accomplished by a strong contrast between the two characters. The famous play writer, William Shakespeare uses numerous foil characters throughout his plays. One of these famous plays is Romeo and Juliet. This play has many foil characters which magnify qualities in...

Romeo and Juliet vs Macbeth