The Odyssey is the epic that has been read time and time again, by varying ages, digging its way into our hearts, becoming an instant classic. Odysseus and the adventures of his homecoming create a much different tale than Homer’s other work, the Iliad, provided. The epic is not about bloodthirsty men trying to get their hands on kleos anymore; it is about the homecoming of a man who uses his wits, not his weapon. In the Odyssey, the characters balance – Homer provides contrasting characters to show the readers the traits that Odysseus holds and how it builds his character development and even those who are foils to him.

Turn in your highest-quality paper
Get a qualified writer to help you with
“ Foils for Odysseus ”
Get high-quality paper
NEW! AI matching with writer

Odysseus’ own son, Trojan War companions, and wife create the man that is called Odysseus, highlighting the various facets of his personality throughout the epic. Odysseus’ son Telemachos matured since the very first book of the Odyssey, becoming more self-confident in his capabilities, more powerful in the speeches he makes, and more importantly, more determined to rule the kingdom that will one day become his.

The growth that Odysseus undergoes in his travels, such as growth in intellect, maturity and strength, his son goes through as well.

The emotional growth in the paralleling stories of Telemachos and Odysseus holds a key part to the storylines. When Telemachos travels to Sparta he meets Menelaus, Odysseus’ friend from the Trojan War. When Menelaus mentions Odysseus, the young Telemachos first tries to stay strong and continue to hide who he is but breaks down and cries, showing he still has a lot to learn.

Odysseus is known for his tricks, especially in the Odyssey where he specializes in not being who he says he is for ninety-five percent of the epic. As Telemachos tries to accomplish being a trickster like his father he shows he has potential but it is not the right time yet to be as tricky as Odysseus is. In book 21 of the Odyssey Telemachos sets up the trial of the twelve axes perfectly for the suitors, even though he was never taught how; only Odysseus knows how to set them up so flawlessly. When it came time for Telemachos to try his hand at stringing his father’s god-like bow that only he could string, he came very close. If it were not for Odysseus’ signal the boy would have strung the bow and won.

He had the potential to be just like Odysseus, stringing the bow that only Odysseus could string, proving that Telemachos has matured to the point that he could almost take his fathers place. He yields the contest to the suitors, stating: ‘Shame on me. I must be then a coward and weakling, or else I am still young, and my hands have yet no confidence to defend myself against a man who has started a quarrel. Come then, you who in your strength are greater than I am, make your attempts on the bow, and let us finish the contest’ (Book 21,131-135). As the suitors witness his failure, Telemachos starts to use and perfect the use of clever responses just like his father, making the suitors feel safer than they really are, not letting them see through his ruse. After the Trojan War ended and time for the homecoming of the soldiers came about, the men who were featured in Homer’s Iliad journeyed on their merry way, back to their homes they left behind for twenty years. Agamemnon, Nestor and Menelaos all had different homecomings, but each of them creates a nicely knit foil for Odysseus.

As Agamemnon stepped inside his own home after twenty years of being away, his wife Clytemnestra and her newfound lover Aegisthus, who was Agamemnon’s cousin, greeted him with a nice bath. Before Agamemnon arrived, Clytemnestra was plotting the death of her husband due to the sacrifice of their daughter, Iphigenia. Agamemnon was stabbed to death by the vengeful tag-team. Agamemnon’s son, Orestes, unleashed vengeance upon his mother and her lover. Agamemnon’s family is a foil for Odysseus’ family life. Odysseus’ family loves him very dearly and has done no wrong as he was away. Penelope, unlike Clytemnestra, stays loyal to Odysseus and even creates an ingenious plan to keep the suitors off her back. Telemachos on the other hand has to deal with the suitors who are trying to marry his mother and have been dishonoring his father, Odysseus, eating their fill since they sat their butts on the stools they deem as weapons. Telemachos can’t even stand up to the suitors as Agamemnon’s son took revenge on the people who killed his father. This shows how Telemachos should be as a son and will soon be as he grows up to be more like his father. Menelaos had a long homecoming due to the gods, just as Odysseus had. Menelaos angered the Egyptian gods, due to the lack of knowledge of Egyptian customs.

He was able to get home with all of his crew, unlike Odysseus, who was a lone survivor. Although Menelaos had an easier homecoming than Odysseus, he did not have a faithful wife, just like Agamemnon. Helen was the reason for the Trojan War; for Menelaos it was not easy to forgive an unfaithful wife to that degree. He cannot rejoin the present as easily due to all that was lost in Troy, destined to be full of grief for eternity. Then there is Nestor, the man whose name means “Returner”. Nestor was the one who had the easiest and most peaceful return home. His palace was full of peace, unlike Odysseus and the other two men. As the three war heroes returned back to their homes, none of them had to disguise themselves as someone else, making it obvious who they were, which was good and bad. Odysseus had to resume pretending he was someone else, generally from Crete, until he was certain that the people who caused the most threats were out of the picture.

That was a smart move on Odysseus’ part. Penelope was Odysseus’ faithful, cunning and stunningly beautiful wife. Penelope, just like Odysseus, tests people until she gets enough information to her liking. For example after Odysseus reveals himself to the household and asks for Penelope, Penelope does not believe the news so quickly. She was not so gullible as to be excited about simple information; she wanted cold hard proof. Penelope shows her cleverness when she wants to see Odysseus, telling Eurykleia: ‘Dear nurse, it would be hard for you to baffle the purposes of the everlasting gods, although you are very clever. Still, I will go to see my son, so that I can look on these men who courted me lying dead, and the man who killed them’ (Book 23, 81-84). She is not willing to let anyone know she is excited to see her husband, so she plays it off cool, saying she was just going outside in order to see her son, not even mentioning Odysseus by name.

Penelope constantly reconsiders and rethinks what she should do, just like Odysseus tends to do because he never wants to be caught off guard, until Penelope, as clever as she is, starts playing the same game he does. She orders Eurykleia to ‘make up a firm bed for him outside the well-fashioned chamber: that very bed that he himself built. Put the firm bed here outside for him, and cover it over with fleeces and blankets, and with shining coverlets’ (Book 23,177-180). Knowing Odysseus would get flustered with her idea, he revealed who he was by stating that the bed could not be moved due to it being made of the olive tree trunk that the house was built on. Not one person could out wit Odysseus and yet, his own wife did so easily. Penelope was just as smart as Odysseus, making them perfect foils for one another.

Odysseus was a man of wit and courage, one who was unfortunate enough to anger the gods. Even with his unlucky fate of a long homecoming, he was blessed with a loyal and loving family, a family that highlights the various facets of his personality. All of these characters molded Odysseus, just as he molded them through the events of the Odyssey. They reflect his growth as a character with their own trials and tribulations. We find the best depiction of Odysseus’ growth in comparison to other characters; his wife, his comrades, and his son all bring out different elements of his personality. Without any of them, Odysseus would not be the great character we all know and love. 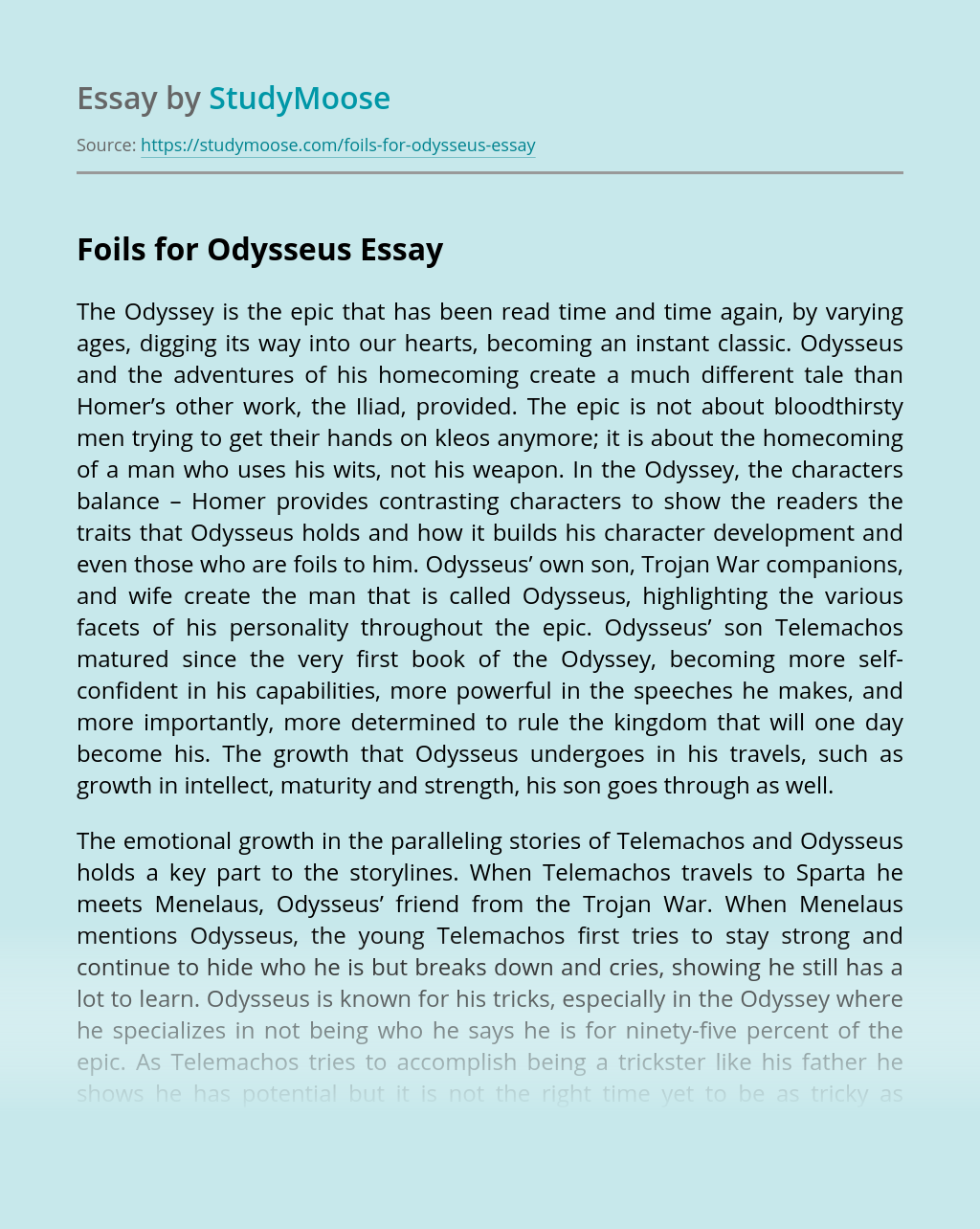 Turn in your highest-quality paper
Get a qualified writer to help you with
“ Foils for Odysseus ”
Get high-quality paper
Helping students since 2015
Stay Safe, Stay Original