“Death of a Salesman” and “A Doll’s House” are two plays that were written in different centuries. In these plays, among other things, is presented the place that women hold in the family, as well as in the society. Although in many aspects, the two protagonists of the plays, Linda and Nora respectively, appear to have things in common, at the same time they are very different, since Nora seems to be more modern and liberal than Linda, which is ironic given the fact that Ibsen wrote his play seventy years earlier than Miller.

Don't use plagiarized sources. Get your custom essay on
“ “Death of a Salesman” by Miller and “A Doll’s House” by Ibsen ”
Get custom paper
NEW! smart matching with writer

The representation of the two women in these two plays is what will be discussed in this paper.

In “Death of a Salesman”, Linda embodies the role of the traditional American woman, which was to take care of her husband, her children and the house, regardless of her personal aspirations, and dreams. The woman is expected to stay at home and engage in everyday house works, like cooking, cleaning and sewing, while the man, as the head of the family, is expected to find a well-respected job position because it was the man’s duty to provide for the entire family.

So Linda has given up on everything she hoped for in her life, she sacrificed herself, just to be with her husband and her two sons, even though her husband doesn’t seem to be treating her very well.

Willy disregards every word Linda attempts to interject in family conversations by interrupting her and accusing her of interrupting him.

He shouts at her, he doesn’t let her speak and when she does, he speaks to her badly. A distinct example is the passage towards the end of Act I, in which Linda attempts in vain to speak her mind: Linda: “Maybe things are beginning to-” Willy: “Stop interrupting!” (1907), and later on when Linda tries again to say something Willie tells her abruptly “Will you let me talk?” (1907), while he is the one doing most of the talking all this time.

Despite her husband’s constant degradation, Linda appears to be a woman who is very loyal, loving, caring and understanding to her husband. Not even once did she complain about Willy’s belittling behavior. Linda seems to be for Willy the perfect wife: she always speaks very nicely to him, she makes sure that his clothes are always mended, and that he has got everything he needs with him before he leaves for a trip. She loves him very much and she doesn’t seem to hold against him the terrible way that he treats her. A distinct example is the fact that right after the incident of insulting her, she proposes to sing to him a lullaby, so that he could relax : Linda: “Just rest. Should I sing to you?” Willy: “Yeah. Sing to me” (1909).

At the same time, Linda stands up for him, takes his side, even if it means to get into a fight with her sons, for not treating him with the respect he deserves as their father: Linda: “He’s the dearest man in the world to me, and I won’t have anyone making him feel unwanted and low and blue …Either he’s your father and you pay him that respect, or else you’re not to come here” (1902). Also, and she tries to protect him by asking for their sons’ help, when she realized that he had been trying to commit suicide, since she didn’t want to do anything that would let Willy know that she has understood that he wanted to die. She was very concerned not to hurt her husband’s pride, realizing that if she confronted him, Willy would be devastated: “How can I mention it to him? Every day I go down and take away that little rubber pipe. But, when he comes home, I put it back where it was. How can I insult him that way?” (1904).

Linda is also a very dedicated mother to her children, that she managed to raise in the best way possible, when she was all alone with them, while her husband was away for a long period of time. She has always been with them; she has educated them since the day they were born and she has tried to install in them good values. Even now, that her sons are adults, she still reprimands them about being selfish, impolite, rude and disrespectful towards their father. And her sons seem to love her and think very highly of her; for them she’s the perfect role model for a future wife: Happy: “Somebody with character, with resistance! Like Mom, y’know?” (1885) This is ironic, since her own husband doesn’t seem to appreciate her, and treats her badly.

On the other hand, Nora, the protagonist of “A Doll’s House”, represents the society’s notion for the women in the late 1800s, which is not very different from that of the mid 1900s, in the sense that the wife has to stay at home, taking care of her husband and children, and doing all the household chores. Under no circumstance is a woman expected to work and contribute to the family income for the man, for once more, the man is the one that works and brings in the money.

Thus, poor Nora is financially dependent, in a great extent, on Trovald, and every time she wants to buy something she has to ask him to give her some money: Nora: “Your could always give me money, Torvald. Only what you think you could spare. And then I could buy myself something with it later on.” (1768). Nora, like all the women of her era, is controlled by her husband, who is the one that wants to make all the decisions for her, even what she would or wouldn’t eat, like when he forbidden her to eat the macaroons that she liked so much.

Nora, just like Linda, is very concerned with her husband’s health, but instead of just watching she decides to do what she can to save his life, even if this means acting behind his back and hurting his pride, in order to get the necessary amount of money to save his life. Nora: “Torvald is a man with … pride – it would be terribly embarrassing and humiliating for him if he thought he owed anything to me” (1775) because for a man that was considered to be strong enough, it would be regarded as an insult to admit that he needs the help of a helpless woman. What Nora did shows that although she appears to be a typical woman of her era, in reality she’s very different, she is a rebel that risks everything so that she won’t lose the man that she loves. In the end, when everything is revealed, she’s very hurt, for she realized that the man that she risked everything for never loved her, and that all she was to him was a beautiful toy-doll to play with, and not a person with real feelings.

The way that the men in her life have treated her is expressed in one word through the metaphor that Ibsen uses: a doll. That has been very confusing to Nora and her role as a mother of three children, since it has made her also think her children as dolls. The only thing that Nora does with her children is to play games. She has completely trusted their upbringing to the nursemaid without worrying about them or trying to teach them values and how to behave, like Linda did. In the end, she realizes that she would have never become a good mother to her children, and in fear of hurting them or turning them into dolls she decides to leave them forever: “And never see the children again either. Never, never.” (1813).

In the end, Nora realizes that she had been living a lie, and she is faced with the dilemma of engaging the responsibilities to her husband and children or the responsibilities to herself. But the need to break free from the simple, decorative roles that she has been assigned, and to find herself, is greater than anything else. She can’t be of any use to anyone without discovering her self first, and see what she can do on her own: “If I’m ever to reach any understanding of myself and the things around me, I must learn to stand alone” (1818). She’s young and beautiful, contrary to Linda who stayed until the end with her husband and children, and she has the whole life ahead of her to love and to be loved, make a new family, since she finally made the decision to leave Trovald and never come back, unless “a miracle of miracles” (1821) would happen.

Both plays discuss the position of the women in the family and in the society. Two different women, from two different times were victims of their era. The one is old, unattractive but caring and supportive; she is Linda, the woman of the 1940s. The other is young, and beautiful but also more modern and demanding; she is Nora, the woman of the 1870s. Both of them weren’t happy with their lives, but only one of them, Nora, finds the strength to leave and change her life. And that is why the Linda was the victim of the capitalistic society, while Nora’s more of a feminist.

"Death of a Salesman" by Miller and "A Doll's House" by Ibsen. (2016, Jul 19). Retrieved from http://studymoose.com/death-of-a-salesman-by-miller-and-a-dolls-house-by-ibsen-essay 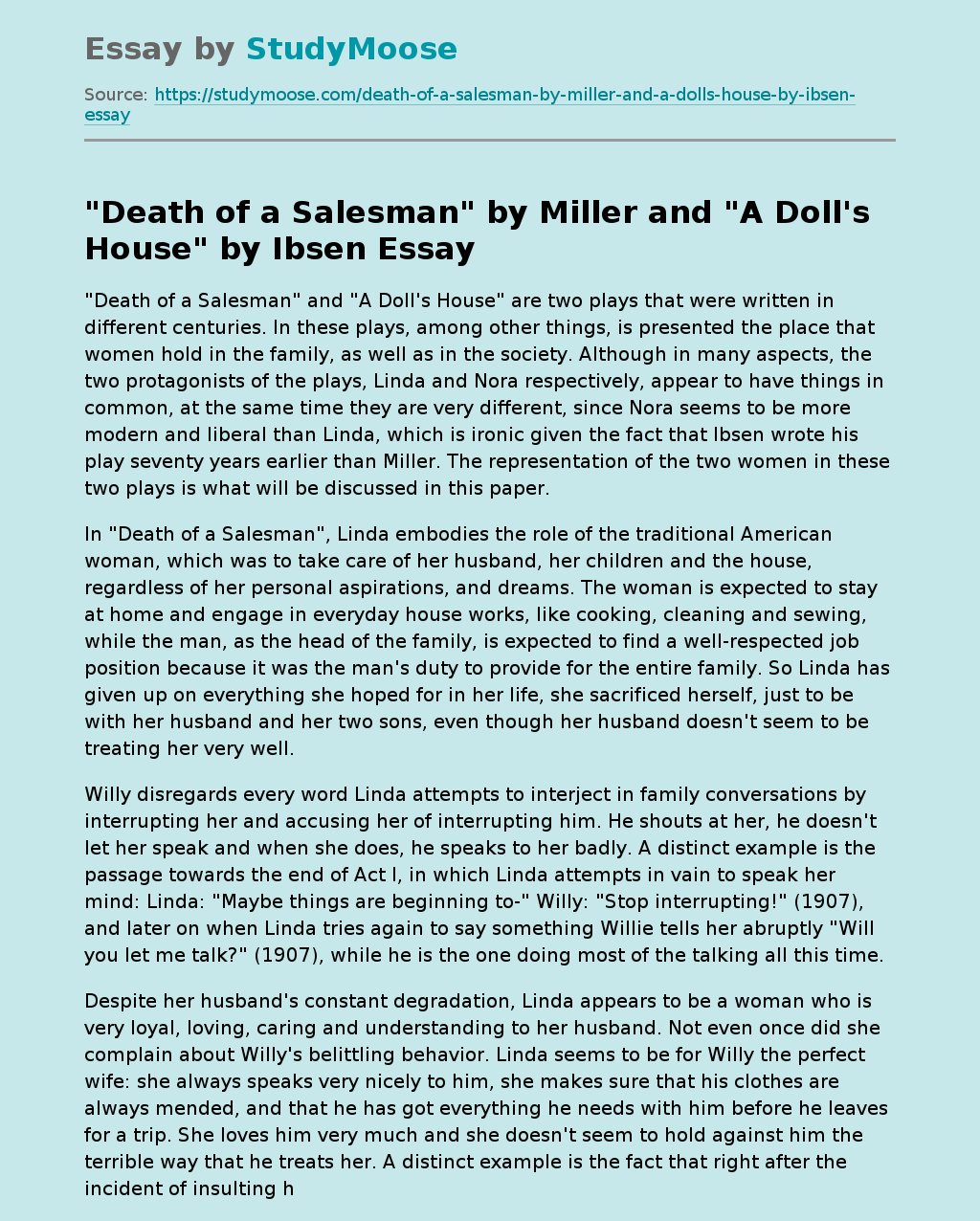