Nora Helmer, the central character, wife of Torvald, and mother of three children, is indeed a classical hero in Isben’s A Doll’s House. She was hiding her character and personality throughout the play under the pretense of the ‘ideal 19th century wife’ who completely abides to her husband. The character of Nora is quite tough to interpret as she is made out of a combination of different traits. Even though she is found to be playful and silly in certain places, she appears very differently in certain other places being very practical and astute.

Don't use plagiarized sources. Get your custom essay on
“ Nora – A Classical Hero in Henrik Ibsen’s A Doll`s House ”
Get custom paper
NEW! smart matching with writer

She is indeed a hero as she was successful in showing that she is a supporting wife, and a good mother.

Nora attempts to become a strong individual even though she was being locked in a male dominated world. Her husband Torvald’s dominating nature was the one that was preventing her from become self motivated. She appeared inexperienced, naïve and vulnerable till the end when she surprised everybody by boldly leaving her husband and children to live an independent life.

Nora’s world appeared to be so childish that the author has named it as a ‘doll’s house’. She appeared as an alien to the real world with no real world experience. She was even found humorous in few incidents. But we can see the same Nora being serious and trying to be superior as she says “one isn’t without influence”.

She is indeed a captivating character. Even though Nora is constructed as immature and silly, we can see that this nature is enforced by the society around her.

However her true nature was destined to be revealed later. Nora is found to be an independent woman who was restricted within the ‘dollhouse’ by her husband. Her life was like that of a butterfly that is trying to get out of the cocoon to show its true colors.

We can see Nora striving, throughout the play, and finally unveiling her original self. She is indeed a classical hero. She was submissive to her husband and was enthusiastic and smart. We can say that Nora was always right in her attitude as this was the best she can be towards her dominating husband. Towards the end of the play she discovered herself and took the big shocking decision to leave her husband and children for ever.

She was found subordinate to her husband Torvald who believed that women are frail and can never make decision of their own. However finally Nora gets hold of her individuality and dares to take the great decision to abandon her husband and children. Nora’s great passion for life and her strong feministic beliefs stimulated her to take the decision of her life. She courageously broke away from the doll house that appeared as a prison for her all through these days.

Nora was always under the care of someone, first with her father and then with her husband. Nora was a materialistic, impulsive and babyish. But Nora appeared as a bold woman in the final scene of the play. We can see Nora the classical hero walking out of her house in the final scene to live her life. All this makes us doubt whether she was pretending to be silly all through these days to adjust with the patriarchal oppression she was suffering from her husband Torvald.

Nora finally becomes fully independent to renounce the false union of marriage and the burden of motherhood. She says “Never see him again.  Never.  Never.  Never.  Never see the children again.  Them too.  Never. never.  Oh – the icy black water!  Oh – that bottomless – that -!  Oh, if only it were all over!  Now he’s got it – he’s reading it.  Oh, no, no!  Not yet!  Goodbye, Torvald!  Goodbye, my darlings.”

Nora always wanted to get out of the clutch of her husband as she says to Rank and Linde “I’ve the most extraordinary longing to say: ‘Bloody hell!’” She finally gets out all her social and traditional commitments and obligations as become free as a hero. She is such a classical character that our hearts are with her even though she took the pitiless decision to leave her moral husband and innocent little children. She can be called as a hero as a fought for a good cause, the freedom for the weaker sex. The position of women in the 1800’s, during the time of Nora was too low.

They lived as housewives with no right to vote, own property, and make any significant transactions. Nora recognized her slavery and preferred to break away and live a life with freedom. It is nothing but her courage to fight against oppression made her the most admirable stage heroine of the century. What she has done is perfectly justifiable in the light is modern ideology and culture.

She was just being a model to the women of modern days. She stepped into a wider world and making her husband understand that he is not the noble person that she expected him to be. She understands that she can no longer continue as a shadow of her husband. She turned out to be a classical hero in the contemporary male dominated society that oppressed women to the core and considered them as a second-class citizen. She just initiated an awakening and made a classical turn in history. 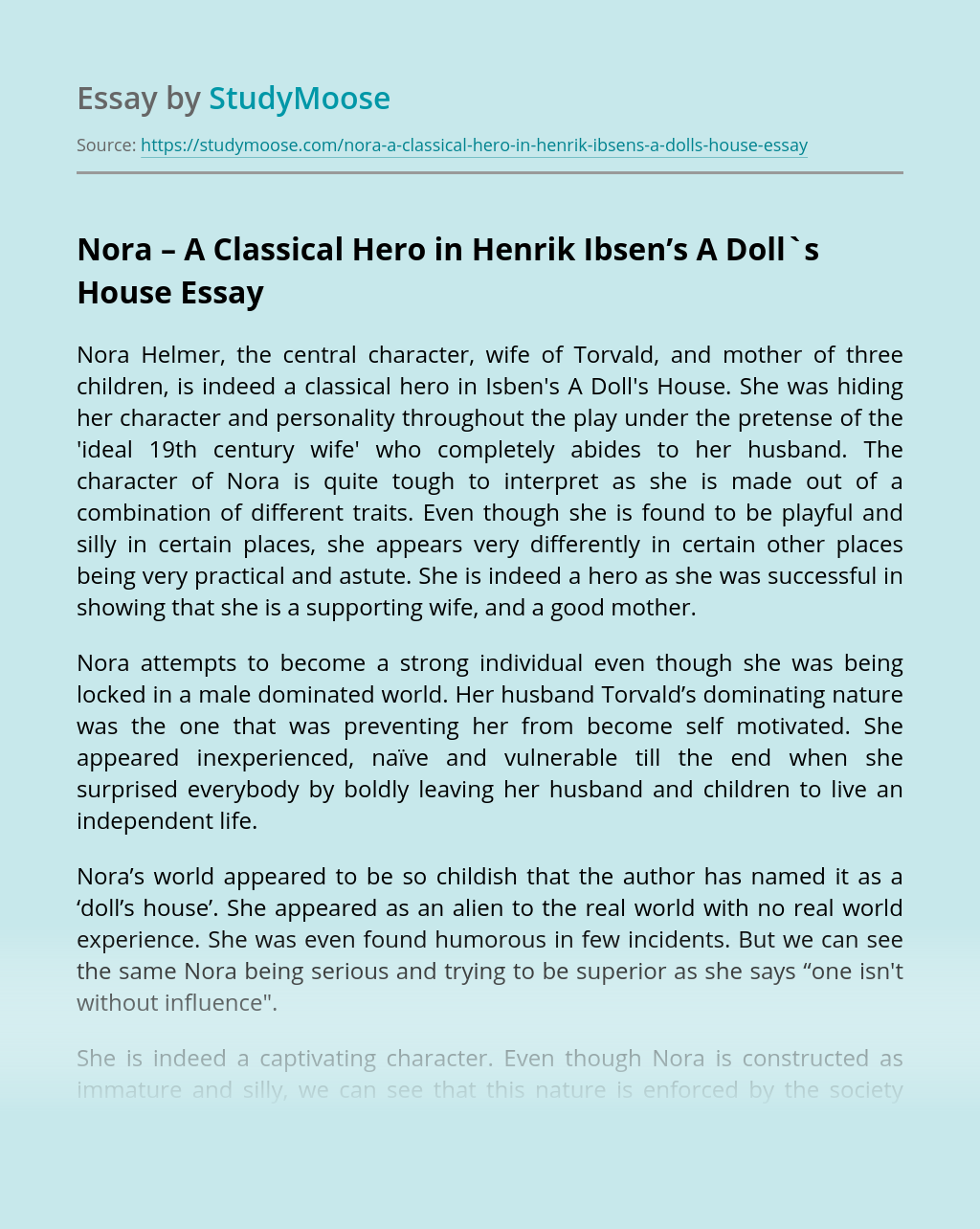