A Doll’s House, originally titled as Et Dukkehjem by a Norwegian playwright Henrik Ibsen was first premiered in 1879, Denmark. This play revolves around a conflict between the two characters, Torvald Helmer and his wife, Nora. How do the techniques in this play guide his audience’s response to the central characters and the action? First we will explain how the costumes are used as masks, then how the doors reflects Nora’s entrapment and her longing to freedom, to finish on how the macaroons are a sign for Nora’s secret and childishness.

Don't use plagiarized sources. Get your custom essay on
“ A Doll’s House ”
Get custom paper
NEW! smart matching with writer

Ibsen creates an atmosphere based on appearances; it is one of the most important symbols in this play.

Costumes are a big deal of appearances; they are used as a tool to hide Nora’s and Torvald’s superficial relationship and her secret. In the first Act, Nora’s outdoor clothes when she comes in, foreshadows her leaving in the end. They come back in the second Act lying on the sofa; it represents Nora’s longing to escape.

This reveals her true self. However, Helmer organizes a fancy dress ball and wants Nora “to go as a Neapolitan fisher-girl and dance the tarantella”. The fact that Helmer chose the dress for Nora shows how much appearances means to him.

Furthermore, Nora is “anxious to look really beautiful at the fancy dress ball”, Nora has to wear a mask in order to keep the secret, even in the presence of those who are dearest to her. “I wish I could tear them into million pieces” symbolizes Nora’s longing to escape, to end this madness tormenting her.

In fact, her wish of destroying all the fancy dress shows how much the dresses are a tool to hide her secret. After Dr. Rank declared his love to Nora, she asks him to go talk to Torvald because an unwanted visitor came to see Nora, Krogstad. In order to keep Torvald talking with Rank’s help, she justifies herself by telling him, her best friend “an untruth”: “[she] ordered [another dress] specially – Torvald musn’t know”. The tarantella dance was originally performed by the people who were victims of a “poisonous spider”, in this case, Nora is victim of her crime.

She dances as if “her life depended on it”, it reflects her difficult situation at the moment and shows Torvald’s ignorance of Nora’s behavior. At rehearsals, Nora wears a coloured shawl but for the actual rehearsal she wears a black one. Why? The coloured shawl defines her desire to seize the delights of life, unlike the black shawl that hides Nora’s fancy dress and expresses Nora’s feeling. She plans to commit suicide when Torvald read Krogstad’s letter about what Nora did in order to save her husband’s life when he was ill. Instead, she “tak[es] off [her] fancy dress”, it foreshadows her leaving, and confronts Torvald.

Have you changed? ” askes Torvald, Nora answers “Yes, Torvald. I’ve changed”. When she pronounces these words, it does not only mean she changed her clothes, but changed mentally as well: she knows the only thing to do is to leave and find herself. This is how Ibsen guides his audience’s response to the central characters and the action; he uses the costumes as a symbol to hide the reality. A Doll’s House takes place at the Helmer’s house, mostly in the living room. The doors are a major imagery in this play. They represent Nora’s entrapment and her longing to freedom.

In the beginning of the first two acts, the doors are closed, meaning there is no chance for Nora to leave, shows her struggle trying to avoid a catastrophe in their “playroom”. Unlike in the third Act, the hallway door “stands open” foreshadowing Nora’s departure, the possibility of running away from her old life. Nora’s character changes throughout the play, at the start of every act, we notice a shift in her. At first, Nora is portrayed as a spoiled girl, careless, childish by “humming contentedly”, tiptoeing and listening at her husband door, disobeying Torvald by eating macaroons.

She acts as if nothing happened, she does not face reality yet. Moreover, the bell rings several times throughout the play; it symbolizes the unwanted visitors complicating the situation. Mrs Linde, Dr Rank arrives first, then Krogstad: “It’s me, Mrs Helmer”, his first words makes his entrance very melodramatic, as if he was the villain, this puts Nora in a awkward tensed position: whenever she feels threatened, she “sees to the stove” because she needs comfort and warmth.

Ibsen uses the door imagery to relate to Nora’s entrapment and freedom, to open and closed possibilities, to a sense of choices freely made and choices irrevocably determined by heredity, by social and environmental pressures. When the door is half open, it does not represent a chance to Nora to leave, but more likely as troubles because Krogstad enters. His visit made Nora realize that what she did “for love”, was actually “a dangerous admission” because “the law does not concern itself with motives”: it shows Nora’s childishness, naivety. Even though, “this secret is [Nora’s] pride and [her] joy”, it irritates her.

This changed her in Act Two; she is in the middle of a thinking process. Nora is alone, “walking restlessly to and fro”: she is trapped and is in danger of having her secret revealed. “There’s someone coming! – No, it’s no one”: Nora is stressed out; she is at the phase of giving up. She needs help from Mrs Linde because she cannot do it alone, she wonders what her children will think if she leaves, “do you think they’d forget their mother if she went away from them forever? ”, Nora can’t take it anymore and got to “get out of this other business”. This foreshadows her leaving.

Furthermore, in the last Act, the hallway door is open, a possibility for Nora to set free, represents the end. It also symbolizes Dr Rank’s death, he comes and disturbs Torvald and Nora after the ball and when Torvald closes the door, two visiting cards with black cross arrives in the letter box. The letter box where stands Krogstad’s letter, this leads to Torvald’s angriness. Ibsen guides his audience’s response by referring the closed door as an entrapment, and the opened door as a possibility to escape. Finally, Ibsen employs the macaroons as props symbolizing Nora’s secret and childishness.

The fact she has been eating macaroons, when Torvald has expressly forbidden her to eat sweet things is typical behavior of a child and goes back to my first point of appearances: “He’s afraid they’ll ruin my teeths”. In the first Act, she hides her bag of macaroons in her pocket, wipes her mouth before Torvald sees her. Nora knows how to look innocent, to manipulate is a very a good liar: “You know I could never act against your wishes”. In fact, that is why she knew how to keep her secret. She eats behind his back, like she committed a forgery behind his back.

But when she is with Mrs Linde and Dr Rank, she “pops a macaroon into [Rank’s] mouth”, gives one to Christine and eats one herself. Her popping a macaroon into Rank’s mouth shows that Nora is being a bit flirty, which foreshadows Dr Rank’s love confession in Act Two. However, Nora’s secret is her pride; it’s her way to show that she is clever, can take care of herself, knows how to manipulate and is, some way, aware of the outside world. In the end of Act Two, Nora says out loud: “We’ll drink champagne until down! […] Put out some macaroons! Lots of macaroons – for once? even though she knows it’s forbidden, it reveals her longing for freedom. On the other side, we see Dr Rank’s and Torvald’s ignorance of Nora’s feeling. “-She isn’t-er-expecting? ” shows Rank’s sexism side for Nora, while Torvald answers “She just gets scared like a child sometimes”: this strengthens the father and daughter relationship between Torvald and Nora. Macaroons are a sign for her secret of her crime, Ibsen uses them as well to amplify Nora’s childishness, and this is how Henrik Ibsen guides his audience’s response to the central characters and the action.

In conclusion, Henrik Ibsen uses techniques such as symbolism, imagery to guide his audience’s response by combining them all together in some way. Nora is hidden by appearances, trapped, but somehow manages to find a way to escape and find her true self. Throughout the play, we can see an evolution in Nora: she starts off by being a little innocent child to end by turning into a remarkable and responsible woman. As T. S Eliot says: “Humankind cannot bear much reality”, at first, Nora did not want to face reality, but was forced to, and in the end, she assumes it. 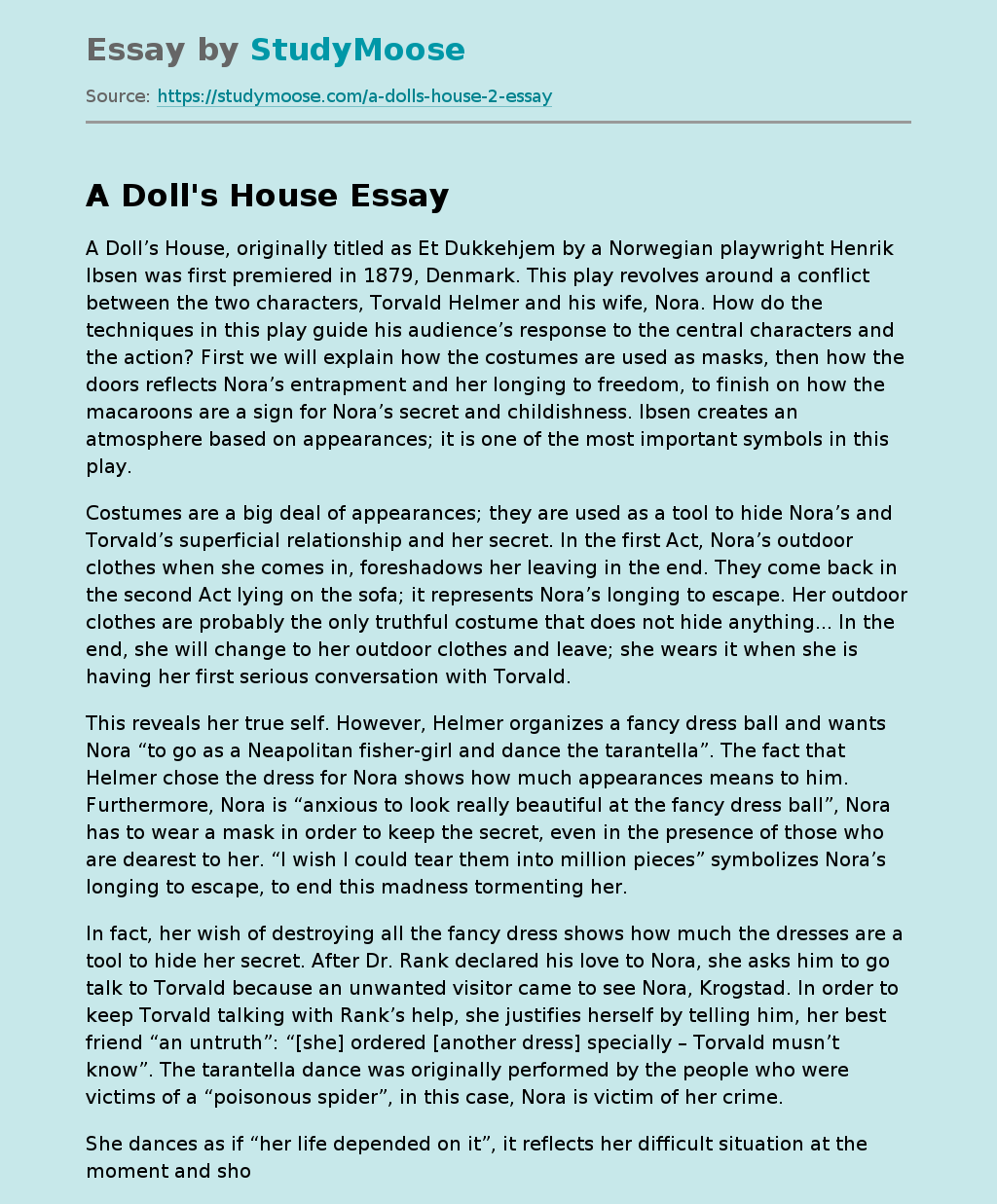